A funding campaign for the arrested captain of a rescue vessel has raised half a million euros. Sea-Watch 3 skipper Carola Rackete faces prison after forcing her way into port with a boat carrying migrants.

A crowdfunding effort for detained sea captain Carola Rackete – backed by two of Germany's top television celebrities – raised €500,000 ($569,000) within hours of its launch.

German-born Rackete was arrested on Saturday after ramming her vessel past a police boat that was blocking its entry to the harbor on the tiny Italian island of Lampedusa. She was held on the charge of breaking maritime law, with Italian Interior Minister Matteo Salvini declaring the maneuver to have been "an act of war."

The funding campaign, fronted by television hosts Jan Böhmermann and Klaas Heufer-Umlauf, was launched late on Saturday. It had already passed its half-a-million euro milestone by mid-afternoon Sunday.

The German humanitarian group Sea-Watch had rescued 53 people from an unseaworthy boat that was launched from Libya almost three weeks ago. In recent days, 13 people were taken off the boat and allowed into Italy for medical reasons.

However, 40 people remained on board when Sea-Watch 3 docked without permission in Lampedusa on Saturday. Before docking, the vessel rammed an Italian border police motor boat that was in its path.

In their crowdfunding appeal, Böhmermann and Heufer-Umlauf say they felt compelled to intervene.

"Those who save lives are not criminals," said the pair. "Those who use their lives to save the lives of others will never be criminals."

"To watch this injustice without doing anything is not an option," they added.

The dreadlocked Rackete has become something of a hero for left-wingers in Italy for her challenge to far-right Salvini's "closed-ports" policy. 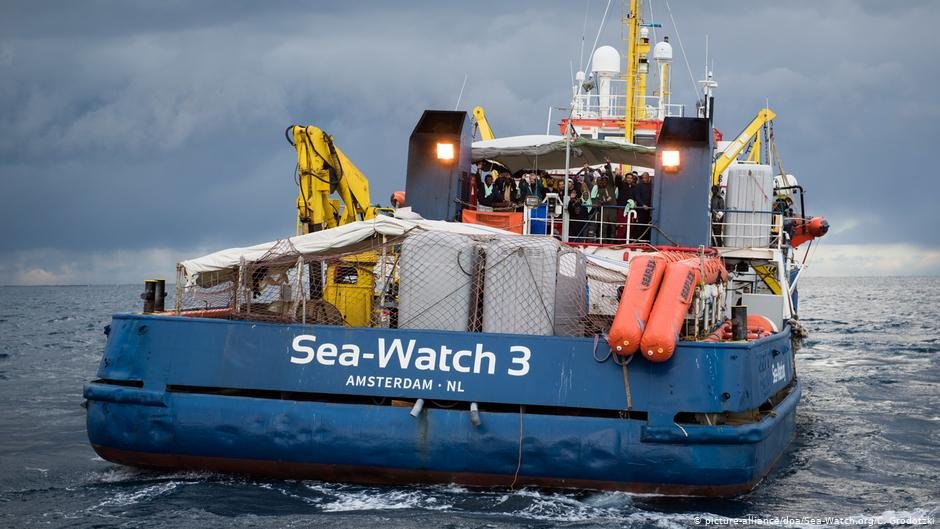 However, Salvini on Saturday said Rackete's actions had risked the lives of the border police, and made it clear Italy was dealing with "criminals." The captain of the police boat said his vessel would have been destroyed if he hadn't taken evasive action.

The migrant rescue ship had waited for authorization to dock for more than two weeks. The docking took place as several EU countries offered to take in the migrants.

German Foreign Minister Heiko Maas commented on the incident, saying that rescuing must not be "criminalized."

"It's a humanitarian duty to save lives," he wrote on Twitter. "It is on the Italian judiciary to swiftly clarify the accusations."