In the north of Paris, migrants have few resources for surviving extreme heat

Hundreds of people live in the camps set up at the Porte d'Aubervilliers in the north of Paris. When heat waves hit France, the tents turn into furnaces and life is harder than ever.

Road traffic at the Porte d'Aubervilliers in the north of Paris further warms the already boiling air on Wednesday, June 26th, a hot summer day. Along the entrance ramp to the ring road, the grass is completely covered by dozens of green tents.

The temperature is around 35 degrees, but it feels like more than 40. Crushed by heat, the camp is silent. In tents, bare-chested migrants sleep or kill time on their phones. Three young men in their underpants try to improvise a shower with a garden hose.

This thin stream of water is the only point of refreshment for all the migrants who live in the camp at Porte d'Aubervilliers. Still, it doesn’t allow everyone to drink and cool down as they need to in hot weather. 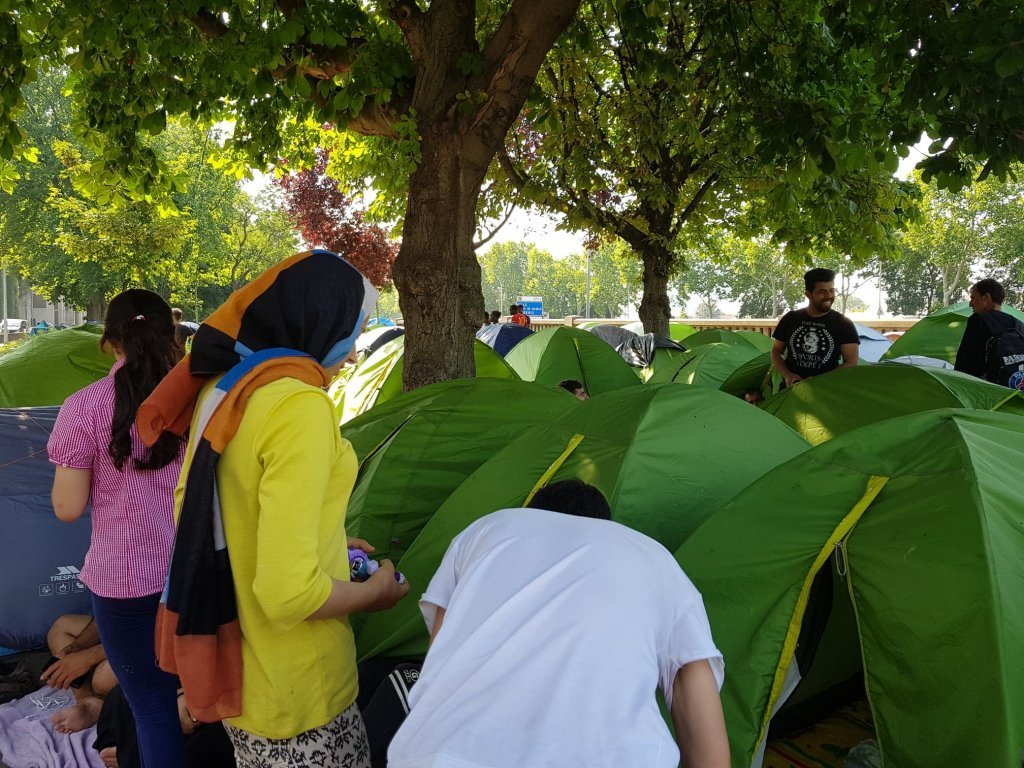 In the middle of the afternoon, like every Wednesday, the association comes to hand out necessities near the camp at Porte d'Aubervilliers. "This week, due to the heat wave, we are distributing water glasses in addition to the usual hygiene kits and t-shirts," explains Amine Rafaa, who works with Utopia 56.

The association is also trying to get the migrants the reusable water bottles that were distributed by Paris City Hall to the homeless in the extreme heat, but they are slow to arrive. A few days before the start of the heat wave, Paris City Hall had also announced that patrols would be reinforced "to ensure increased vigilance and reach out to people on the street". In addition, the opening hours of the La Chapelle reception center have been extended to "7 days a week, with a capacity of 400 showers per day".

Suffocating heat in the tents

Fatouma and Rokia have come to pick up water, soap and t-shirts. Both of the young Ivorian women, who are living in the camp furthest from the water point, are pregnant. Fatoumata, covered by a navy blue wool dress that keeps her horribly warm, is now in her eighth month of pregnancy.

The two women live with their husbands and Rokia's two daughters in one of the camps at Porte d'Aubervilliers. "The heat is stifling right now but we can't sleep outside the tents," Rokia says. "And, anyway, it is better to sleep hidden because if someone sees a woman sleeping outside, she could be attacked," Fatouma adds.

In the camp, Ahmad*, Jamila* and their three children do not plan to sleep outside their tents either. For two months, this Moroccan family has been living on a piece of grass that borders the exit ramp of the ring road. Jamila points to the tears on their tent caused by stones thrown by other migrants. "Sometimes men drink a lot here. We are very scared," says the young woman, her face surrounded by a light scarf.

'I can't afford to take my son to the pool'

The heat is hard to manage for their three children aged 11, 12 and 14. "Youssef [the youngest child] asks me every day to go to the pool, but I can't take him there, I can't afford it," Ahmad says. What’s more, the parents, who have not applied for asylum, fear being arrested if they move.

The only place where the family can find some respite is at the solidarity integration space (ESI) managed by Emmaus solidarité in the 15th arrondissement. Every day, they can take showers and wash their clothes there.

For parents and children alike, it is the nights that remain the most difficult. The father and his two boys sleep three in a tent barely one meter wide. The mother shares another tent with her daughter. So, very often, the nights are short. While the parents are recounting their difficulties, their eldest son falls asleep behind them, overwhelmed by the heat and fatigue.