Private sea rescue organizations are struggling for their presence in the Mediterranean: Ships are seized, penalties could increase and tedious stand-offs with authorities put a strain on crews. While Sea-Eye has ended its mission for the time being, German charity Mission Lifeline has announced it is preparing a new rescue mission with a new ship.

Sea Eye’s rescue vessel “Alan Kurdi” has stopped its mission for the time being, other rescue vessels are stuck in Italian ports, and there's the threat of hefty monetary fines: Private sea rescue organizations are struggling to keep their life-saving missions in the Mediterranean Sea afloat.

“We need to refuel diesel and strength,” Regensburg-based German charity Sea Eye said on Tuesday. Its chairman, Gordon Isler, added that discussions with Malta or Italian authorities were “exhausting.”

On Tuesday, the “Alan Kurdi” handed over 44 migrants to Malta’s navy after it had rescued them in Maltese territorial waters.

Without the “Alan Kurdi,” the only remaining active migrants rescue ship in the Mediterranean is the “Open Arms” of the Spanish NGO Proactiva Open Arms. This week, the Spanish government reportedly threatened the charity with a €901,000 fine if it continued to rescue migrants. On Thursday, from its current location in the Central Mediterranean, the NGO tweeted that "We are alone here. We face people in danger of death and we have to be prepared for the worst."

Other rescue ships currently stuck in different ports include the “Sea-Watch 3" and the sailing boat “Alex” of Italy’s Mediterranea Saving Humans (both Lampedusa) as well as the “Iuventa” of German charity Jugend rettet (“youth rescues”).

Meanwhile, Dresden-based refugee aid organization Mission Lifeline has announced it is preparing a new rescue mission in the Mediterranean Sea.

“We have a new ship and are in the process of equipping it,” Mission Lifeline speaker Axel Steier said Tuesday. Although it’s a bit smaller than the “Lifeline,” which is still stuck in Malta, the new ship would be able to take up to 100 people aboard.

Mission Lifeline did not disclose details about the exact type of ship or its current location. According to Steier, this is because they expected local authorities to "obstruct the ship."

The NGO also said “Lifeline” captain Claus-Peter Reisch on Tuesday had conversations at Germany’s Federal Foreign Office in Berlin about so-called quota solutions. The goal was to find specific agreements on the reception of rescued people with countries including Malta, Luxembourg and Germany before the start of the next mission.

Last summer, the “Lifeline” had taken 234 migrants on board in the Mediterranean. Following an odyssey that lasted several days, the ship was allowed to dock in Valletta, the capital of Malta. Maltese authorities confiscated the ship upon arrival.

In mid-May, Reisch was sentenced to a €10,000 fine for sailing an improperly registered rescue ship to save displaced people on the Mediterranean. Before that, he had to appear in court in Valletta. Reisch has since appealed the decision. 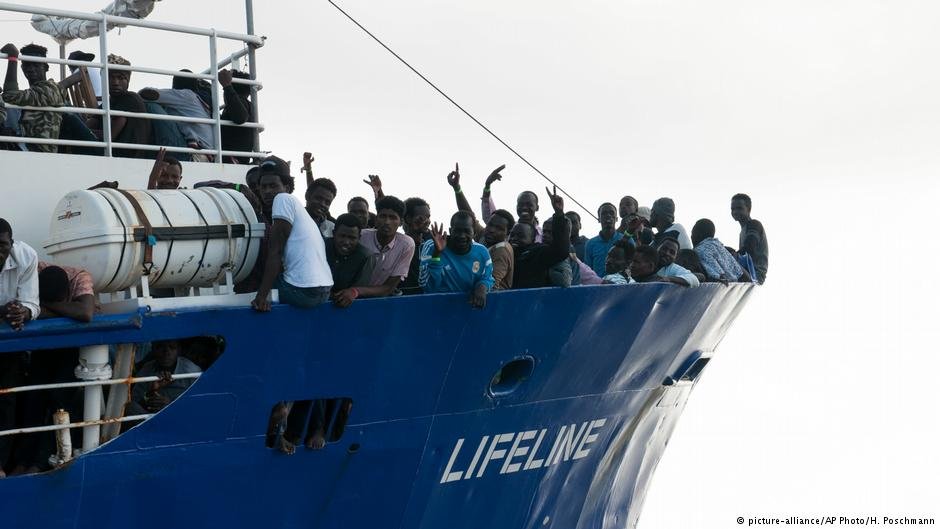 According to migration researcher Jochen Oltmer of the University of Osnabrück, lawsuits of survivors and human rights organizations against Italy, among other countries, before the European Court for Human Rights had limited effects. The main reason, Oltmer said, is that such lawsuits usually take a very long time.

Meanwhile, Italy’s Interior Minister Matteo Salvini is trying to up the penalties for private sea rescue organizations. To that end, his far-right governing Lega party came to a first agreement with its coalition partner, the Five Star Movement, to change a recently adopted security decree.

If enacted, penalties for private sea rescue organizations would increase from currently €50,000 to up to €1 million.