After German migrant rescue ship captain Carola Rackete called on Europe to take in hundreds of thousands of migrants stranded in Libya, her most recent public appeal to no longer distinguish between different migrant groups has stirred a debate on so-called climate migrants. We take a look at the complex issue of 'persons displaced in the context of disasters and climate change.'

In an interview with Germany's Bild newspaper, Sea-Watch 3 captain Carola Rackete said no distinction could be made any longer between various migrant groups.

"We are now reaching a point where there is forced migration, i.e. migration forced by external circumstances, such as climate. And we no longer have a choice and cannot simply say that we don't want these people," she said.

Rackete's comments on "climate migrants" came after she on Monday commented on the plight of African refugees in Libyan detention centers. Also talking to Bild, she demanded the EU to take in all refugees currently in Libya.

"Those in Libya must leave immediately for a safe country," Rackete said in the interview.

"We are hearing about half a million people in the hands of smugglers or in Libyan refugee camps that we have to get out. They must be helped immediately to make safe passage to Europe," she said.

Rackete meanwhile still faces an interrogation hearing in Italy on Thursday in regards to the unlawful docking of the privately funded Sea-Watch 3 search and rescue mission in Lampedusa in June.

'We cannot take in everybody who wants to come to us'

There was a mixed response to her comments from German politicians. Ulla Jelpke, a spokeswoman for domestic affairs for the Left Party (Die Linke), said on Twitter that the government must "make it possible for all refugees in Libya ... to be admitted to Germany."

"We cannot just readily accept half a million economic refugees or people coming to Europe out of poverty," he told Bild newspaper.

Peter Beuth, the interior minister of the state of Hesse, meanwhile called Rackete's statements "irresponsible." Talking to the same newspaper, Beuth instead called for further assistance and reinforcements in the fight against human traffickers as well as more effective protection mechanisms at the EU's external borders.

"We must not create additional incentives but reduce the number of refugees," Beuth said. "We cannot and will not take in everybody who wants to come to us."

'Persons displaced in the context of disasters and climate change'

This week's monsoon flooding in three South Asian states that killed dozens of people and forced more than a million from their homes and temporary shelters was the latest indicator showing that climate change-induced migration is a growing global phenomenon.

The UNHCR refers to the consequences of climate change as "extremely serious," including for refugees and other people of concern. In its Global Compact on Refugees, adopted by the UN General Assembly in December 2018, the UN recognized that "climate, environmental degradation and natural disasters increasingly interact with the drivers of refugee movements."

However, climate migrants - or environmental migrants as they are sometimes called - are not legally considered refugees according to international law. To date, there is no globally accepted or legally binding definition of a climate migrant, and the term "climate refugee" meanwhile is being discouraged from being used and somewhat regarded as a misnomer - even by UN bodies.

There may be "situations where the refugee criteria of the 1951 Refugee Convention or broader refugee criteria of regional refugee law frameworks may apply," according to the UNHCR. One example: If drought-related famine is linked to situations of armed conflict and violence, an area known as "nexus dynamics."

Yet the UNHCR still doesn't endorse the term "climate refugee;" instead, it prefers "persons displaced in the context of disasters and climate change."

"Climate change is one of those factors [causing immigration to Europe to increase]," Mark Akkerman of Dutch organization Stop Wapenhandel recently told DW. "I think the EU definitely does take that into account even if they don't say it out loud at the moment."

Researchers at Columbia University, meanwhile, have shown that between 2000 and 2014, temperatures deviating from the norm in countries that migrants come from correlated with increased asylum applications in Europe. 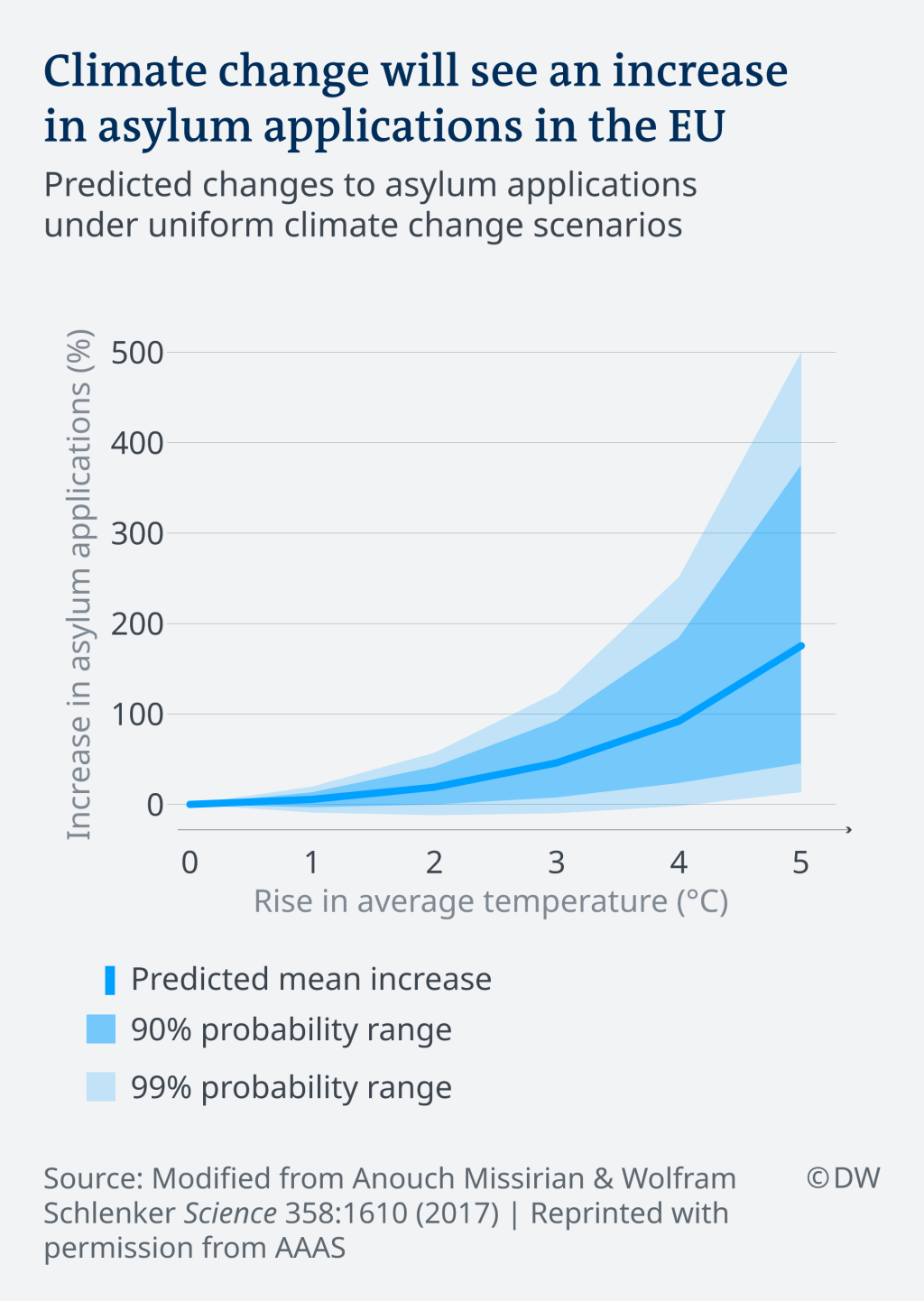 "Isolating environment/climatic reasons is difficult, in particular from humanitarian, political, social, conflict or economic ones," she wrote in a recent blog post. "It can sometimes be an impossible task and may lead to long and unrealistic legal procedures."

Although it's not clear how many people will be uprooted by climate change, the number of "climate migrants" is predicted to increase.

According to the UN, some 17 million new displacements associated with disasters in 148 countries and territories were recorded in 2018 alone; drought, meanwhile, displaced 764,000 people in Somalia, Afghanistan and several other countries.

As many as 143 million people in sub-Saharan Africa, South Asia, and Latin America could potentially have to relocate within their countries by 2050, a recent World Bank Group report estimated.

Moreover, hundreds of millions of people who live near the world's oceans could also be under threat if sea levels continue to rise.

It is important to point out, however, that while some people are driven to leave their homes directly because of drought or flood, the role of climate change in migration issues is often far more complex.

Global warming can be a so-called threat multiplier: Crop failures, natural disasters and depleted resources — be they fertile soils or water — can tip delicate economic and political balances into crisis, fueling poverty and conflict.

Meanwhile on Monday, Italian reports said prosecutors were expected to appeal Rackete's release from house arrest. According to Italian media reports, prosecutors in Agrigento, Sicily want to challenge the issue before Italy's top appeals body, the Court of Cassation.

Rackete became a criminal suspect in Italy after she took 40 migrants to the island of Lampedusa on June 29, ignoring orders not to enter Italian territorial waters.

Upon arrival she was placed under house arrest, but a pre-trial judge scrapped this detention on July 2 - much to the chagrin of Italy's hardline Interior Minister Matteo Salvini.

Rackete, however, remains under investigation for abetting illegal migration and resisting orders from public officials and from a military vessel. On Thursday, she faces an interrogation hearing in Agrigento.

The prosecutors also said that deadline for filing the appeal is Wednesday. Sea-Watch spokesman Ruben Neugebauer said the organization was confident that the court would uphold the lower court's decision to free their captain.

With material from KNA, dpa