On Lampedusa, a warm welcome with a smile

Being hugged, wrapped in a blanket and offered a cup of tea: This is how migrants who are rescued at sea in Italian waters are received on the Italian island of Lampedusa. It is not the authorities who organize this warm welcome, but a civil society group. Irene Caselli visited the Forum Lampedusa Solidale in June.

“We are interested in meeting the gaze of these people, in looking them in the eyes. We want to recognize them as people,” says Paola La Rosa, a lawyer who is part of the organization.

Forum Lampedusa Solidale, or Lampedusa Solidarity Forum, is a group of volunteers that carry out several activities on the Italian island, and act as a mediator between locals and migrants.

Migrants who are rescued at sea are often exhausted, in shock or in need of medical treatment after surviving a trip on boats that are mostly not seaworthy. On Lampedusa, Italy’s southernmost point, they are usually disembarked on the Molo Favaloro, the military pier.

Even though it is not accessible to the public, images of the pier have become famous, as journalists often stand just outside the entrance to be able to catch a few moments of the arrival: the disembarking, the line for the van or the transfer to the hotspot.

“At the pier, it is as if you were in the emergency room, but nobody spoke your language. You don’t know where you are, what will happen to you. You hope the worst is over, but then you are met by uniforms, gates, orders,” says La Rosa. “All we can do is to mitigate a little such inhuman conditions.” 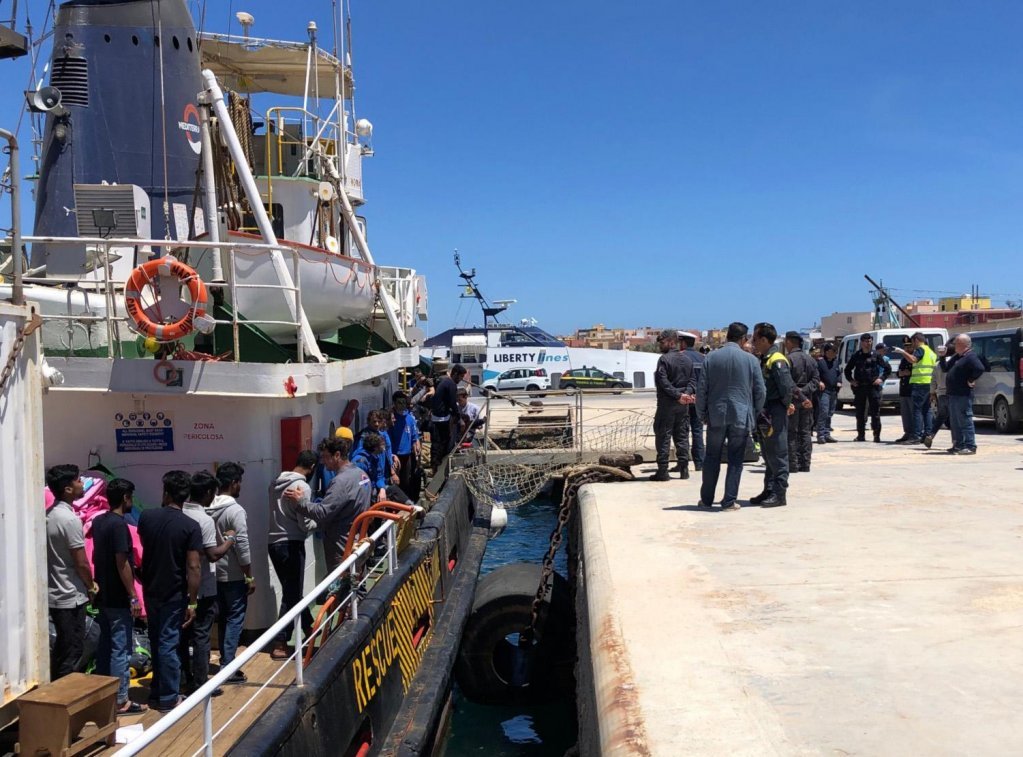 Forum Lampedusa Solidale has been receiving migrants for years, but their presence on the dock has been official since 2016. In 2017, a decree by the then-head of the Coast Guard in Lampedusa, Paolo Monaco further established their presence, by setting out clear disembarking procedures. According to the decree, there can be up to six volunteers from the Forum during the disembarking - the same number granted to humanitarian bodies including the UN refugee agency UNHCR, the International Organization for Migration IOM and Save the Children.

For its position in the Mediterranean, closer to African coasts than to the Italian mainland, Lampedusa has always been an arrival point for people trying to reach Europe through the central Mediterranean. In the past, boats used to arrive without monitoring, people would disembark spontaneously, and they would be assisted by the local population, who were mainly fishermen.

But now rules are stricter. When spotted in Italian territorial waters, migrant boats are picked up by the Coast Guard or other military branches and brought to the Molo Favaloro. Upon their arrival, migrants are checked by health authorities and transferred to the clinic, if necessary. Otherwise, they are loaded onto vans and driven to the hotspot, where they spend only a few days before being sent off to the mainland.

“Since it has become a militarized operation, now the community is excluded,” says Carmelo La Magra, the island’s parish priest, who is also a member of the Forum. “Priests were always present at the arrivals, even when their presence was not contemplated - this made it possible for the Forum to be born.” 'We look them in the face and we say: No worries'

The Forum is a non-religious group, bringing together different faiths and people. Tourists as well as locals participate, and the idea is to create dialogue around difficult issues and to provide solidarity.

In the case of migrants, a lot of the discussions centered around the arrival itself. The pier is not exactly set up to welcome people: there is only one bathroom, and no changing rooms for those who have spent a long time at sea. The Forum’s presence makes a difference because they provide beverages and thermal blankets for those who arrive. There are also smiles, and the word “welcome” that the volunteers tell each person they meet.

“Even if certain institutions give orders and scream, we let them do it and then we just look at the migrants in the face and we say, No worries. The climate is different, and that is what we want to achieve,” says La Rosa.

The members of the Forum receive a WhatsApp message alerting them of an upcoming arrival, and up to six can show up at the dock.

Their most important role is to act as de-facto mediators between the local population and the migrants who usually spend a relatively short time on the island. In June, as the stand-off between the migrant search-and-rescue vessel Sea-Watch 3 and the Italian government took place, the Forum launched a solidarity initiative towards the migrants and the rescue vessel's crew who remained at sea.

Every night a group of volunteers met at 10 pm on the steps of the local church. They wrapped themselves up in the shiny thermal blankets they hand over to migrants upon docking. A few set up mattresses on the floor and slept there every night until the Sea-Watch finally docked after spending more than two weeks at sea.

“They know there is someone who thinks of them. It may seem like a detail, but it is important,” says Giovanni Costantino, a nurse and member of the Forum. “It is like when you smile to a terminal patient. That smile is worth a lot.”

For Alberto Mallardo of Mediterranean Hope, the Forum has one other crucial role: it makes it possible for the local population and NGOs to come together to reflect on the issue of migration.

“Often, NGOs and humanitarian associations impose themselves on territories planning in a way that is disconnected from the territory,” Mallardo told InfoMigrants. Mediterranean Hope is a migration program financed by Italy’s Federation of Protestant Churches and it is the only migration NGO with a constant present on the island. “Thanks to the Forum, we can reflect, discuss and elaborate strategies together with the community,” he says.