Libyan authorities on Sunday have buried the bodies of 46 migrants who had drowned at sea in one of deadliest incidents in the Mediterranean so far this year. Authorities said the bodies of the remaining 16 would be buried later.

Rescue workers reported on Friday that they had recovered a total of 62 bodies from waters off the Libyan coast. Some 145 people were reportedly rescued, according to the International Organization for Migration (IOM), adding that more than 110 people were still unaccounted for after the event. A Libyan fisherman told the Agence France-Presse (AFP) news agency that the waters were full of floating bodies after the incident.

"Because we don't have the means, we'll have to wait for the sea to return the bodies so we can pick them up," a member of Libya's coast guard told AFP on the condition of anonymity.

It remains unclear whether it was only one boat that capsized or whether there were two boats involved in the incident which took place in waters off the city of Khoms last Wednesday, about 120 kilometers east of the Libyan capital, Tripoli. It is also unknown how many people were travelling in total at the time. The charity Doctors Without Borders (MSF) said that survivors had told them there were about 400 people.

One of the survivors, Abdallah Osman, told AFP how their boat started taking on water about 90 minutes upon setting out to sea. The 28-year-old Eritrean said that a passing ship saw that their boat was in distress but took no action.

"We thought they were going to save us but the people on board just looked."

He added that their boat filled with water half an hour later and that the engine broke eventually down. They spent six to seven hours in the water, during which time many men, women and children perished.

Hours later, survivors were taken back to shore mainly on small fishing boats. 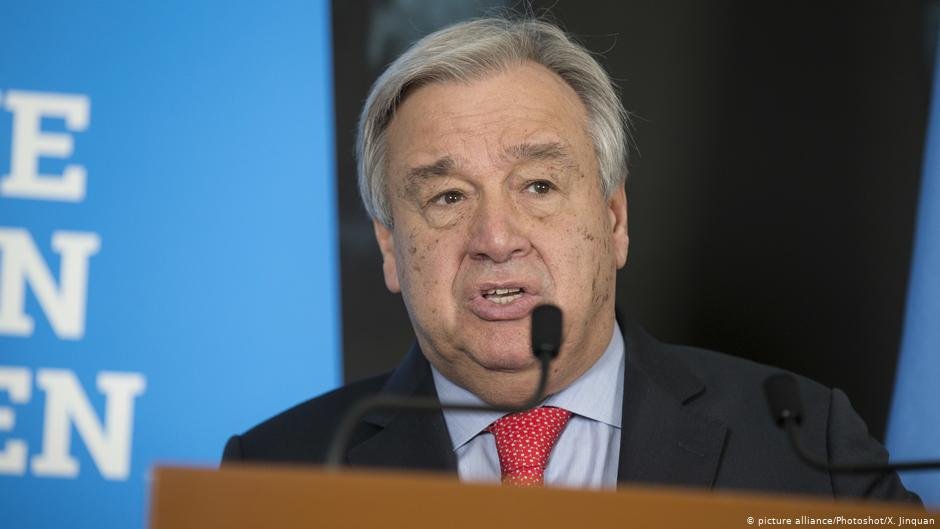 Funeral in a war zone

Libyan navy spokesman General Ayoub Kacem said that most of the rescued migrants were from Eritrea, while Palestinians and Sudanese were also among the group waiting to be taken on to reception centers. Seven of the migrants rescued from the wreckage were reported as assisting with the funerals over the weekend.

"We were saved and here we are today to bury 46 of our brothers, children and women," Anwar, a young Eritrean survivor of the tragedy, told AFP.

Authorities on Saturday took a first attempt at transporting the bodies to a cemetery in Tripoli's eastern suburb of Tajoura, but ongoing fighting in the area forced the convoy to turn back.

They succeeded a day later, reaching a small plot of land surrounded reserved for burying the bodies of migrants that have perished at sea. Many of the graves found there bear numbers instead of names on them, as the identities of the dead migrants often remain uncertain.

Reactions around the globe

UN refugee agency chief Filippo Grandi said on Twitter that the shipwreck was "the worst Mediterranean tragedy of this year."

"Restoring rescue at sea, ending refugee + migrant detention in Libya, increasing safe pathways out of Libya must happen NOW, before it is too late for many more desperate people," he added.

The worst Mediterranean tragedy of this year has just occurred. Restoring rescue at sea, ending refugee+migrant detention in Libya, increasing safe pathways out of Libya must happen NOW, before it is too late for many more desperate people. https://t.co/XuZJpDtZfv

UN chief Antonio Guterres meanwhile said he was "horrified" by the latest tragedy at sea. "We need safe, legal routes for migrants and refugees. Every migrant searching for a better life deserves safety and dignity," he tweeted.

I am horrified by reports that about 150 people died in a shipwreck off the coast of Libya.

We need safe, legal routes for migrants and refugees.

Every migrant searching for a better life deserves safety and dignity.

"They have done everything they can to pull up the drawbridge to Europe," Amnesty said, "yet people are still risking their lives to come to Europe".

Before this latest shipwreck, the United Nations High Commissioner for Refugees (UNHCR) and the IOM had said that 426 migrants had perished in the Mediterranean thus far this year.