Cedric Herrou: 'We can save people by showing them that they are needed'

Five asylum seekers and refugees are finding their way back to independence and happiness through working the land of farmer Cedric Herrou, who has become famous for helping migrants in the Roya Valley in France.

Djasson has swapped mangoes, bananas and sweet potatoes from Senegal for aromatic basil from southern France. Squatting in the dry ground of the Roya Valley on a hot July morning, the 32-year-old carefully follows the advice of Charlotte, a volunteer from the Emmaus Roya association, about how to make bouquets. He's not on familiar territory. His prefers to take care of the carrots. "Come and see my plants," he tells us in broken French. With a stooped but confident gait, he proudly shows off verdant plants on a terraced garden overlooking the majestic valley.

Djasson is once again working as a farmer, which he had not been able to do in the five years since he left Casamance, a Senegalese region that has been engaged in a separatist conflict for three decades. He is one of the "companions" of a rural Emmaus community set up by farmer Cédric Herrou and his organization Defend Your Citizenship. Since July 4, the seasoned activist, who has become a symbol of assistance to migrants in this region on the border with Italy, has been sheltering six people, including four asylum seekers and one refugee. "An unconditional welcome", he says, adding that the number of people he can integrate into this community is limited to eight. 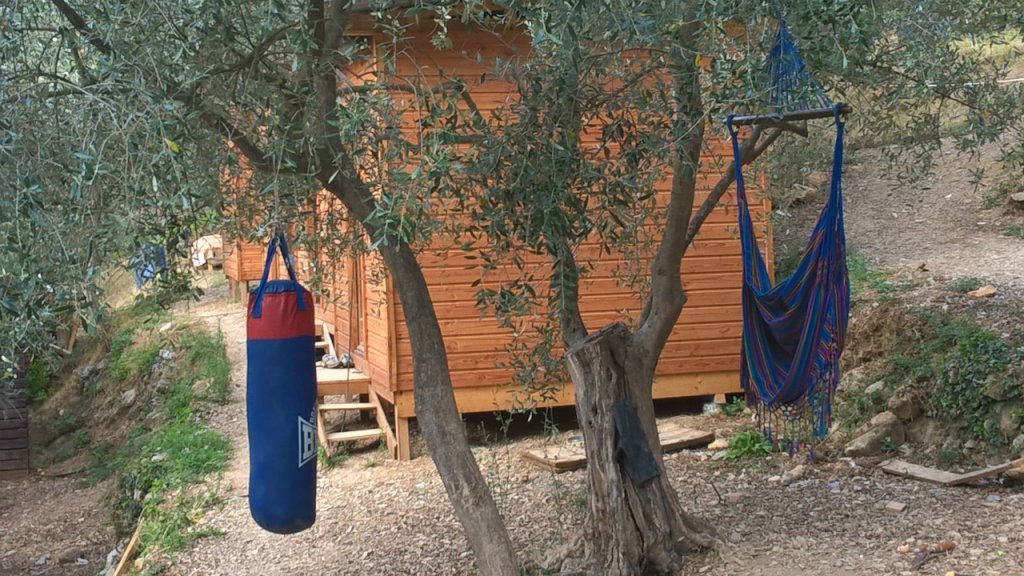 On this estate, accessible by a steep path, 400 laying hens are kept, the fruit of some centuries-old olive trees is harvested, and strawberries and a few vegetables are grown and sold in organic shops and collectives. "For the moment, we are not financially self-sufficient," explains Herrou in a serene tone. "Materially, we are poor, but we're rich in humanity." The small community, each member of whom receives a monthly salary of 350 euros and pays taxes, currently lives on an endowment of 250,000 euros.

The residents of the commune live in caravans and wooden huts equipped with bedrooms, showers and toilets. They all wear the same black flip-flops, share their meals in a kitchen whose walls and ceilings are lined with drawings made by previous residents. Behind this holiday-camp setting, enveloped in the song of the cicadas, lies a clear goal: to help these disenfranchised people through the working of the land. "We can save people by showing them that they are needed," says Herrou, who also has a political ideology. "I intend to demonstrate that these people can be participants in a valley, a neighborhood, a city, and that they have something to offer us, if they are welcomed properly.”

For the activist, who is still on trial for aiding migrants, the time for offering emergency shelter is over. Almost no one crosses the Italian border anymore. He has hosted a total of 2,500 migrants since 2016, and up to 250 people at the same time, so he has now chosen to focus on long-term care by learning from his past experiences. "Some of the guys I was hosting were spending the day on Facebook. It didn't matter much, there were only depressed people in the house. They needed an activity: You can't be okay while you're inactive." Last December, he organized an olive harvest, something he hadn't done in years because of time constraints. "That made everyone feel good," recalls volunteer Charlotte. “We came home in the evening exhausted and happy. We saw people transform." 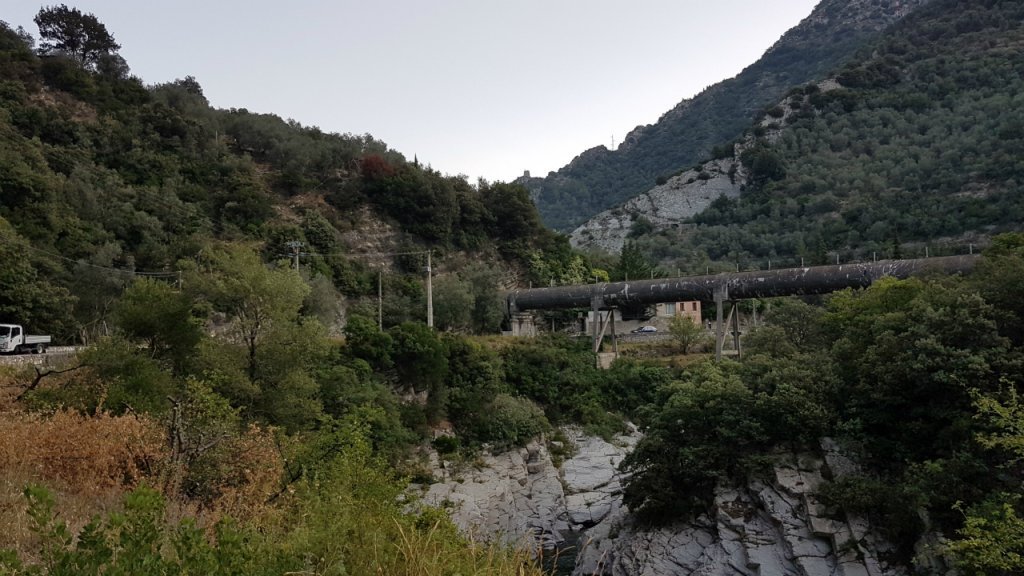 Six months later, Cédric Herrou turned to Emmaus, "an organization with people who look like us", to take advantage of the OACAS status (Community Hosting and Solidarity Activities Organizations) and thus build his community. Since then, activity at the center start at 7 am for everyone. Visual proof of this new ethos: a rowing machine and weights are now available to everyone in the field, and a punching bag is suspended from the branch of an olive tree.

After two months with Herrou, Jaffaru Atairu says he has found "peace of mind". "Here I am good, I am happy. I have everything I need," he says in English. This 37-year-old Nigerian, tattooed between the eyes, has no lack of skills. "I can do everything. I know how to drive a tractor, fish, and I'm even an electrician," he says. He also knows about construction. Nails pinched between his lips, it is up to him to show the youngest member of the group, Youssouf Barry, 18, from Guinea, how to assemble a frame.

"They are happy to show that they know how to do things," says Herrou, "Sometimes it even turns into a competition between them. perhaps overzealously. It reveals a need to be appreciated."

Over the past three years, Atairu has had little opportunity to use his know-how and feel useful. He recalls the endless road through the desert between Niger and Libya, "a week of driving night and day", the horror in Libya, where "not a day went by without someone dying", the crossing of the Mediterranean that ended in the capsizing of his boat and his rescue, as well as the "2 years and 7 months" spent in Italy. Lost years.


"These people hadn't done anything for years: even the food in the refugee camps, they didn't make it themselves. They have to relearn everything," explains Marion Gachet Dieuzeide, co-leader of the community. "So we make sure they are as autonomous as possible."

Among the mandatory tasks: Each person takes a turn cooking for everyone according to a schedule of meals written on a blackboard. Today, it is Hossein's turn; he wears no shirt and a wide smile. This Iranian, passionate about French literature, prepares an Iranian galette made from lentils, potatoes and onions. In the tranquility of Herrou's property, he wrote a book about exile, which he hopes to publish one day.

Go 'to the other side'

In his perfectly tidy cabin, Hossein is full of praise for Herrou, but he will soon say goodbye to the community. In mid-August, he will go to Paris, where he has found accommodation. This will be his second attempt to settle in the French capital. The first one was "horrible". 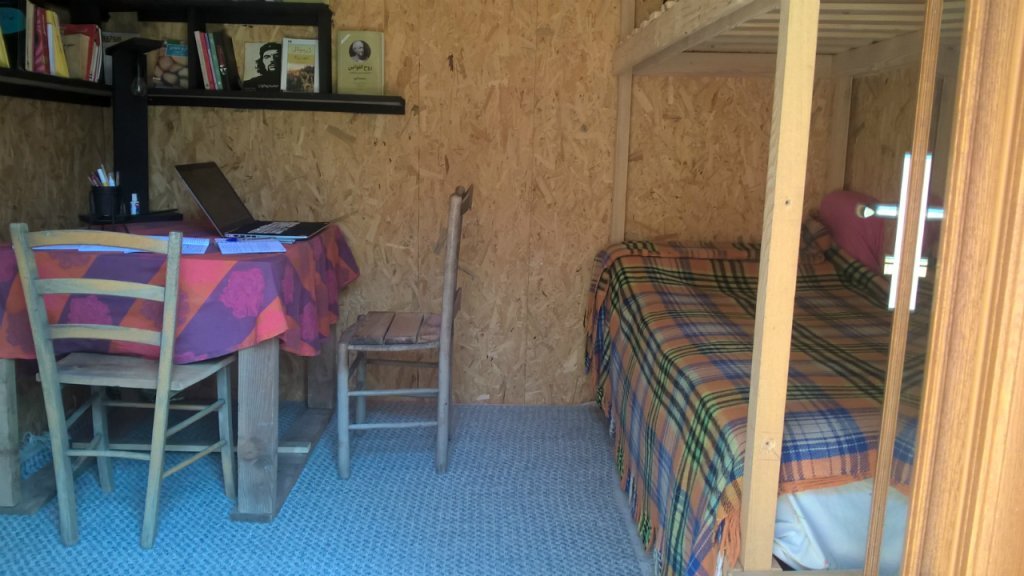 In any case, Emmaus Roya is only a transition. A sign above the washing machine reminds those about to leave "for Paris" not to forget to wash their duvet. "This isn’t a job, it's not an end in itself, it's a passage," says Herrou, who encourages residents to perfect their French and to gain as many skills as possible while they're with him. "The goal is not that they stay, it's that they go on without us. And they want to participate in the functioning of a country that welcomes them, they are not there waiting for some kind of handout."

Herrou has bigger plans for the future: He is looking for a new plot of land to expand his production and set up a "kind of restaurant" in order to offer a setting in which his community would be more oriented towards the outside world. "I want people here to be able to realize their dreams: to have a family, to be in love, to have a job, and to be independent."

Djasson is aware that this life is a parenthesis. If he obtains his refugee status, he plans to try his luck "on the other side", he’s thinking Lyon or Paris. He talks about his future with passion. Among his desires: to work in the restaurant business and to meet a woman, he says, before leaving, full of enthusiasm.