The charity Migrateful was set up two years ago to help refugees, asylum seekers and vulnerable migrants in the UK teach cooking classes in a bid to help them on their journey to integration. It currently operates in London and Kent and is about to launch in Bristol.

“Anyone who is a passionate home cook can be trained up to be a professional cookery teacher,” says Jess Thompson, founder of Migrateful.

The training program at the Migrateful organization lasts 12 weeks and covers storytelling as well as cooking skills. The program, says Thompson, “is designed to build refugee, asylum seekers and vulnerable migrants’ confidence so that they can share stories, about the food, about the ingredients, about their lives.” At Migrateful, trainee cooks are helped with their ‘script’ and are familiarized with the idea of becoming a "performer and a leader." Elahe and Parastoo, a mother and daughter duo from Iran, are two of Migrateful’s founding chefs. Celebrating Refugee Week this year, Thompson wrote that the duo were “proud to have taught the ‘mother cuisine’ to over 600 Londoners at their cookery classes over the last two years.” Their classes have been described by participants as “delicious and touching” as they weave saffron and rosewater scented dishes with stories and a taste of family.

In Iran, Elahe was a trained psychologist. She left the country in 2006 after the political situation became too dangerous. In the UK her qualifications weren’t recognized and she struggled to find employment. It was Elahe’s eagerness to work which sparked Thompson’s drive to found Migrateful.

The seed of an idea

Prior to setting up Migrateful, Thompson had worked in refugee camps in north Morocco and Dunkirk in France. “I had quite a front-line experience and I was a bit traumatized by what I had experienced. I was keen to come back to the UK but felt passionate about supporting refugees.” She didn’t want to take an office-based charity role in the UK and so started to think about how she could continue to support the integration of refugees in the UK. She began a course called “The Year Here Fellowship,” which helps participants pilot different business ideas which address social problems in the UK. Thompson’s idea was to start a business which would help refugees. The food link came after her work running a time bank in east London, a service where people could swap skills with time as their currency. “I had a room full of 15 refugee women [one of whom was Elahe] and we went around the room and they all said ‘I would really like to teach people how to cook my food, because that is something I feel confident with,'" Thompson explains.

That was the moment, says Thompson that she realized that food was a skill set that lots of people had and could offer. “Food was something which would help to empower them and there are lots of people in this country which would love to learn their cooking.” Migrateful “organically grew” from there because the people who attended loved the cooking and the chefs enjoyed the experience too. 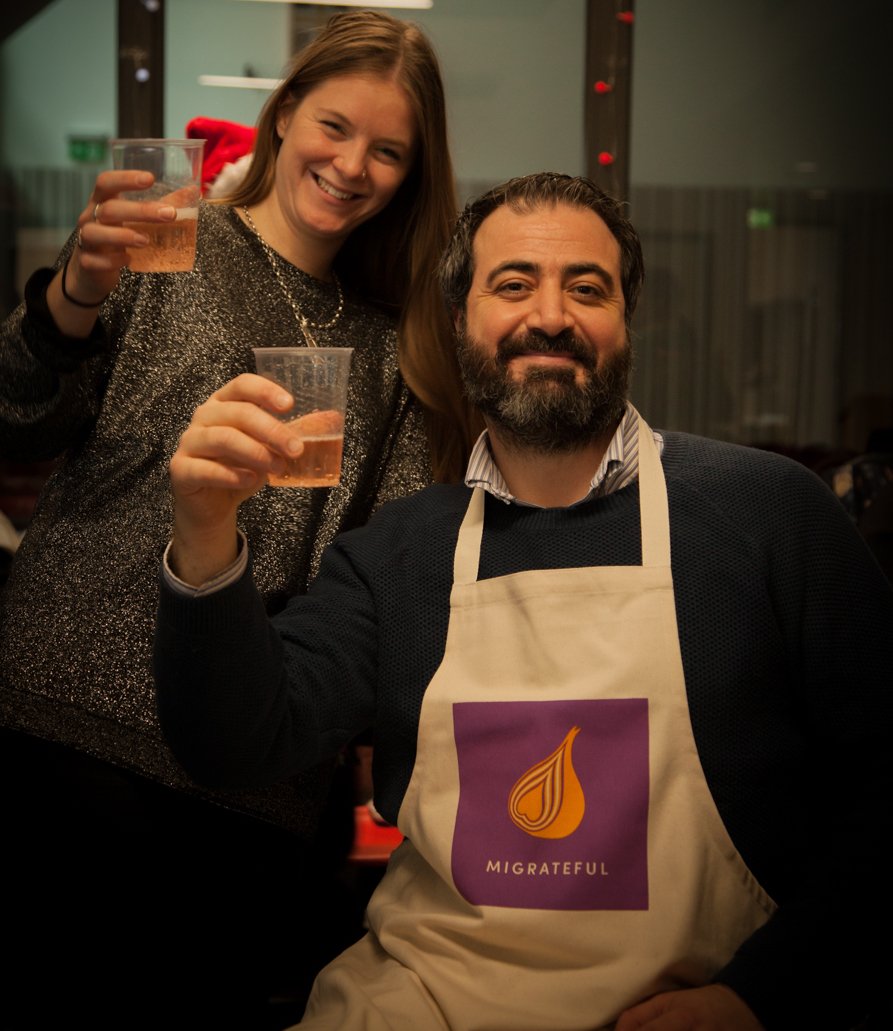 Two years on, all chefs attend a 12-week training course which builds their confidence and helps them think about the kinds of dishes which might appeal to their mostly British audience. “Some of the African chefs have tended to come up with some pretty crazy dishes,” laughs Thompson. “We try and get them to think about what people will actually enjoy eating. In some cases, they are incredible cooks from the start and in others, we have a recipe writing team which can help tweak the recipes; especially when we have a lot of vegan customers and a culture that might be very meat-orientated.” 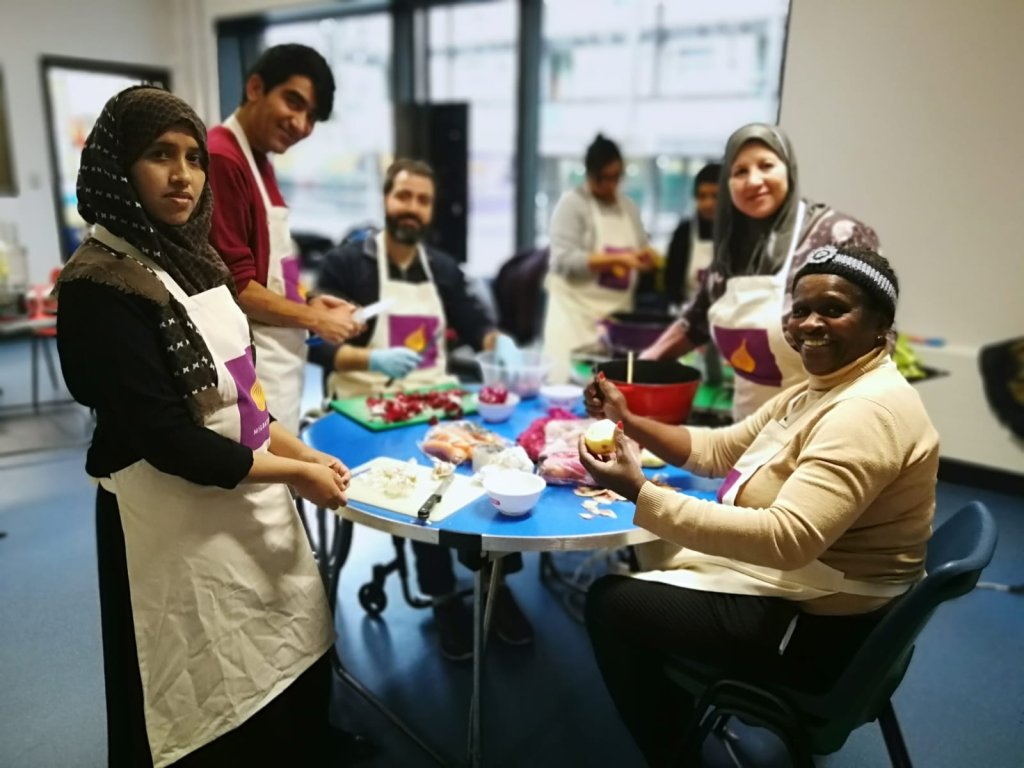 The cooks learn some professional chef skills, how to use a knife and food hygiene and most importantly how to multi-task and make sure the group do the actual cooking. “It’s about teaching them to become teachers.” Each chef then does three practice classes with their peers before being ‘let loose’ on the public.

A growing roster of countries and cuisines

Migrateful has about 19 chefs on the books at the moment. There are chefs from Afghanistan, Albania, Bangladesh, Cuba, China, Ecuador, Eritrea, Ethiopia, Gambia, Iran, Lebanon, Nigeria, Pakistan and Syria. Some have already gone on to full-time employment and four have set up their own catering organizations. Over half of their chefs are asylum seekers with no right to work. In their cases, Migrateful provides moral and emotional support to people who are adrift in society, frustrated and not able to make use of their skills after their move to a new country. They also offer a 25 pound weekly "destitution fund" explains Thompson, "for any chefs who are not allowed to work and have no recourse to public funds." 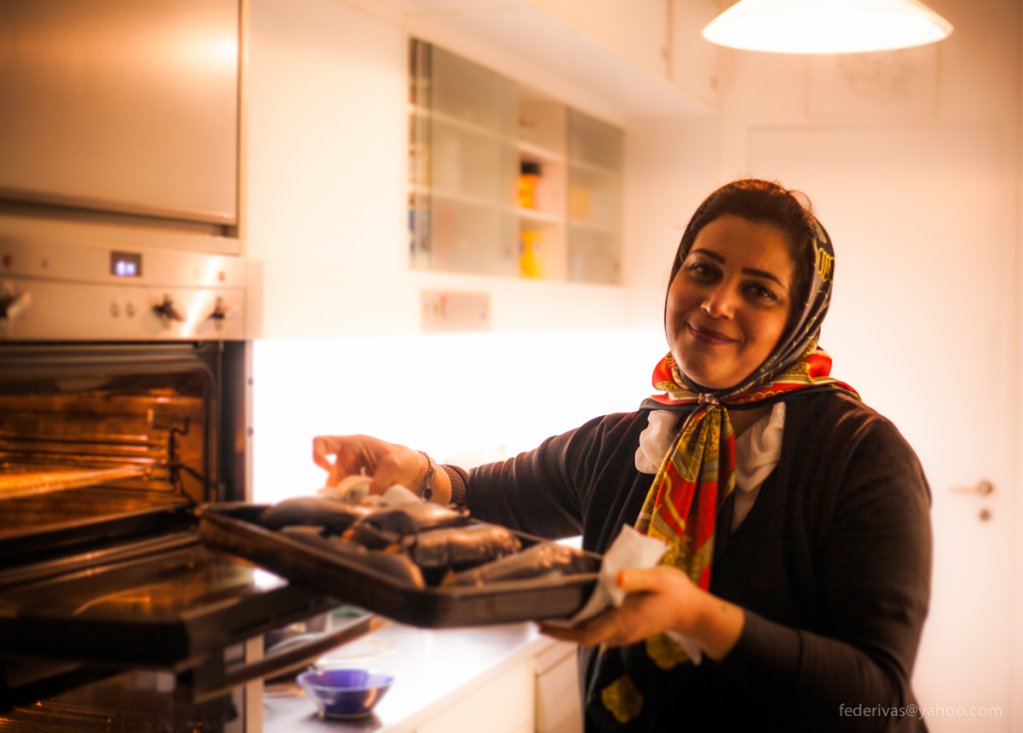 “Not being able to communicate and meet people were the biggest barriers to integration I faced when I arrived in the UK. It’s hard to stay positive. Migrateful is really helping me find purpose. At our cookery classes the people I meet seem so excited to talk to me and now I feel really welcome in this country. Migrateful has helped me to improve my confidence and self-esteem," Elahe said. 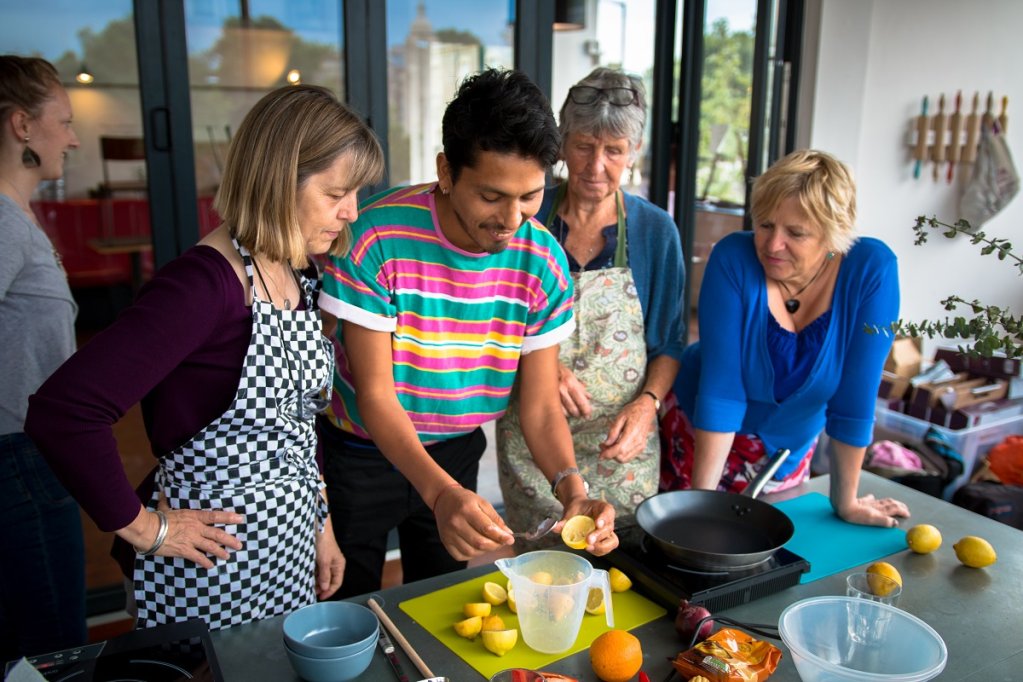 Migrateful started with one cookery class a month. “We had three chefs we piloted it on, and now we’re running ten [classes] a week,” explains Thompson. In all, she estimates they have “taught almost 300 cookery classes to 3000 participants.”

The operation has grown, allowing Thompson to hire a couple of people to work with her in the office. She also blogs, writes and makes videos and is talking about expanding around the country. In London, they currently have six facilitators running the classes for the chefs and two volunteers who turn up to help with washing up. “The commitment is one cookery class a month,” says Thompson. 'A positive part of the week'

Many chefs are dealing with intense situations in their personal lives. Teaching at Migrateful offers them stability and support. "The cookery class is such a positive part of the [cook’s] week. There are some nice friendships which have come out of that with the staff and volunteers," Thompson reflects.

A few months ago, Thompson posted a video about Migrateful’s work. It got 180 thousand views and among the viewers was the celebrity chef Jamie Oliver. “He messaged me and said ‘I think what you are doing is great and we’d like to support you.’ Then Jamie Oliver and his team invited the Migrateful chefs to teach their team some of their cuisine. Our Iranian chefs [Elahe and Parastoo] went and it was great, really good publicity. We are talking about bringing all of the chefs to him so they can learn some skills there…” Elahe says that “cooking is therapy. I feel alive and creative when I am cooking. I believe everything will look even more beautiful if we bring love, passion and time to it. […] Food is an important way for me to stay connected to my past and to my country.”

Thompson is aware that in London at least, most of their cooking classes play to the ‘converted' -- those people who are already positive about migration. That's why Migrateful wants to run classes in areas which might not be so open towards migration. “Our secondary aim, after supporting our refugee chefs is to try and change negative perceptions towards refugees in the country,” says Thompson. “Areas like Tunbridge Wells in Kent have a very high percentage of Brexit voters saying that they weren’t happy with the rate of migration. Our theory of change is based on contact theory. You have a really positive interaction with a refugee over food and you see them as a fellow human and not an enemy.”

Thompson is applying for funding at the moment to run more classes like the Kent pilot in various areas in the UK. Potential future chefs at Migrateful get invited to an assessment. In theory, anyone can join Migrateful as a chef. However, a person with very few English skills, who is also shy, might find it hard to lead a cooking class, Thompson explains. There are exceptions, though. Some of the chefs don't speak much English, Thompson explains, but they are such good communicators in other ways that they make up for it. 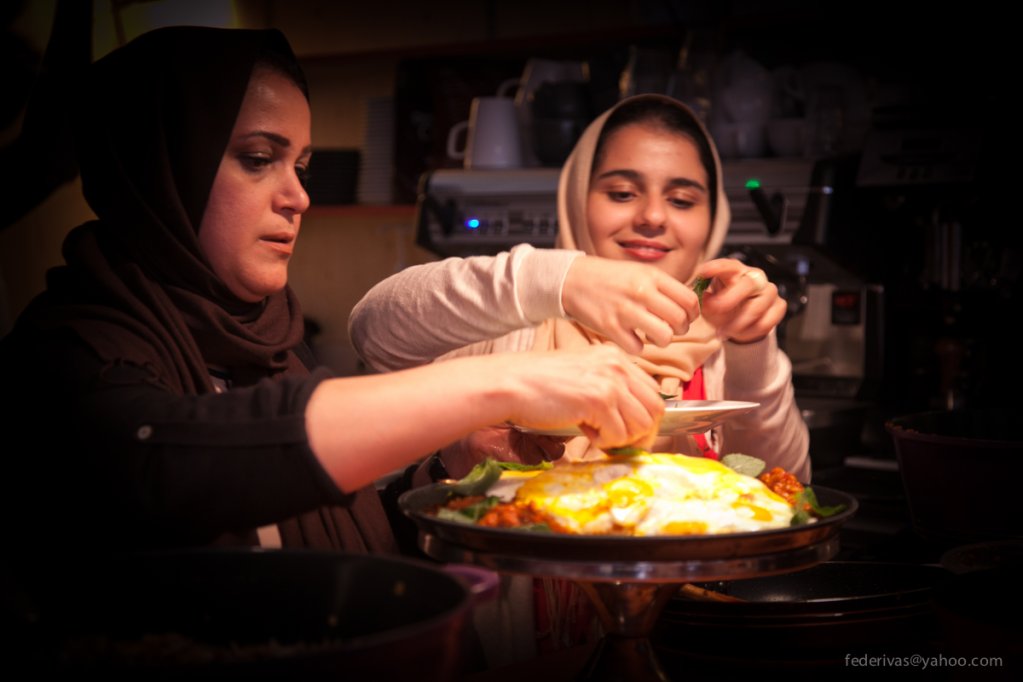 In terms of cooking, “we are trying to decide if there is such a thing as a bad cook or whether you can train someone to be a better cook or whether you want them to be a good cook from the beginning…” Thompson explains. She remembers one chef who came to them, who was a great storyteller and a lovely person but the food she cooked was not very palatable and not the kind of thing that paying customers might want to learn to make.

Thompson says she finds it difficult though, to be the one to say, (sometimes without deep knowledge perhaps of African cuisine) “oh you should do it this way.” That’s why they are about to bring in a Nigerian woman who runs her own catering company to train up some of the West African chefs in the kinds of foods that customers would associate with their countries, and most importantly, want to eat. “I always enjoyed how food brings people together, but I have no particular chef expertise,” admits Thompson. She calls the cooking classes “a microcosm for integration. Because you have this really nice group of people who want to get to know the chef and each other. Everyone who comes to the classes has a real interest in integrating. For that one evening, you have a really positive experience. So we are focusing on those small victories. Our classes are selling out and we are running lots of them, so it feels like people are coming together and integrating. It doesn't feel like we are up against the negative side of things, it is all very positive.”

Small positive steps are all she can do, faced with the “hostile environment that refugees and asylum-seekers are dealing with.” Yesterday, recounts Thompson, “a chef called me and said ‘oh because of my asylum claim I’m not eligible for free [medical] prescriptions and I can’t afford them. I don’t know what to do.’ You just realize how many obstacles there are to fulfill their basic needs. The whole idea of a destitute asylum-seeker is heartbreaking.” 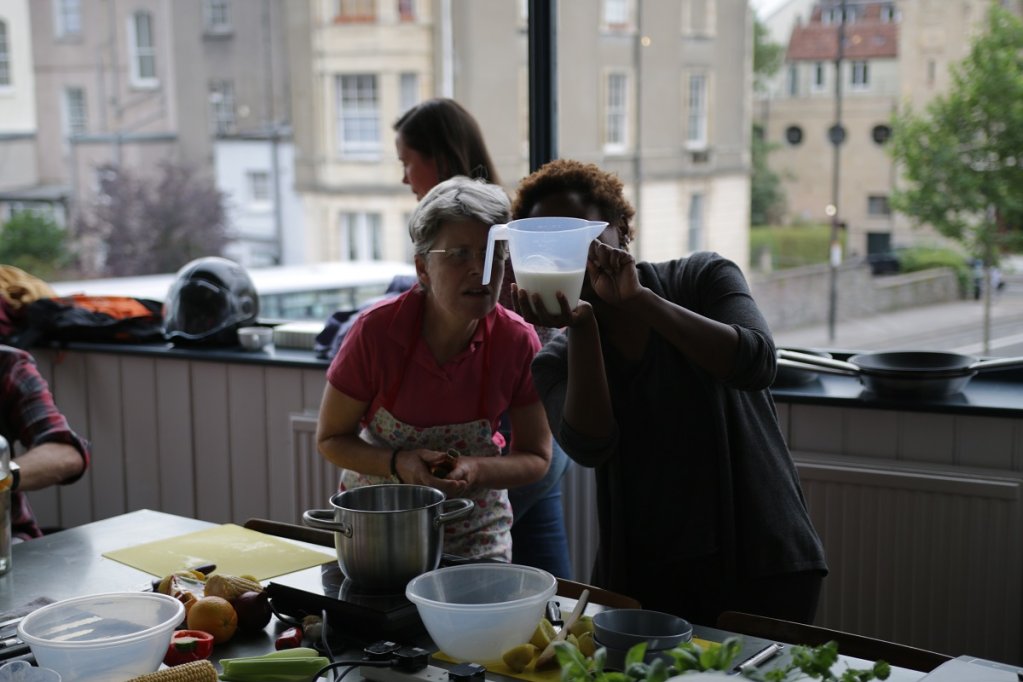 Thompson thinks that the positive nature of Migrateful is important for everyone concerned. “It is a really positive, celebratory part of everyone’s week.  Even the chef’s training is a fun time with everyone dancing and eating. I guess we are not addressing the systemic issues but we are saying ‘this is what we can do, faced with the hostility.’”

InfoMigrants attended Ahmed's cooking class in London. You can read more about his story here.