At FoodCycle, groups of volunteers cook donated food, which would otherwise have been thrown away, for communities in need around the UK. One of their projects in London is run at the Happy Baby Community for migrant and refugee women and their children. One of the volunteer project leaders is Pepe Clavijo, a Venezuelan migrant who wants to give something back to the community.

A kind of magic takes place every Monday in a small church hall in London. A group of volunteers unload cartons of food waste on to tables and the sides of a small corner kitchen. There are trays of peppers and lettuce, carrots, packets of pasta and bread. Over the course of a morning, the kitchen becomes the source of a host of delicious smells. People work quickly, chopping, stirring, sizzling large pots of food before the fruit and vegetables are transformed into huge bowls of pasta, salad, and rice and are distributed across the various tables.

Some Mondays, Pepe Clavijo leads this group of volunteers and helps create the magic. “Being a migrant myself, I was especially drawn to this project,” says Clavijo, who is a Venezuelan national and migrated to the UK in 2017. "Given what has been going on in my country, I felt that it was time to give a little back," he explains.

The project that Clavijo volunteers at works directly with refugees and migrants and is FoodCycle's biggest of 38 projects around the country. It is run at the Happy Baby Community in Hackney, a charity that offers a safe space for migrant women and their children. Many of the women have been trafficked -- FoodCycle offers them the opportunity to sit down together to enjoy a meal and to also take some cooked food home either to eat later or to ease their shopping burden that week.

On a usual Monday, a group of around 6-7 volunteers create meals for between 50-100 mothers and their children. 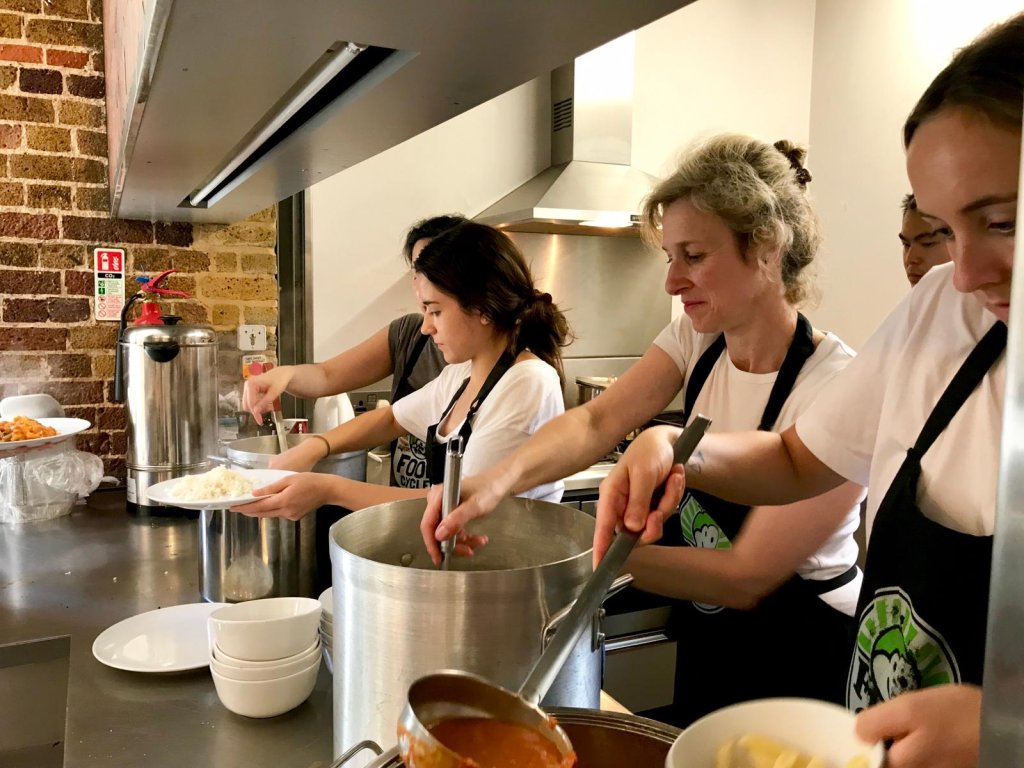 Like all the volunteer project leaders, Clavijo commits to volunteering at least once a month for the project. His employer allows him 16 hours a year for volunteer activities and the rest of the time he makes up by working later during the week to cover the hours he would have normally been at work.

“I’m lucky, ... my work is quite flexible," Clavijo explains. In addition for every 40 hours that he volunteers, his company donates 1000 dollars to any charity he chooses. Clavijo works for a company that provides analytics and risk assessment tools. Its corporate responsibility program supports employees volunteering and charitable interests.

On a cooking day, Clavijo tends to leave the house at about 9:50 am to pick up some of the donated food from two local suppliers, the Turkish Food Center and Better Health Bakery (a baking charity which works with people with mental health challenges in society.) More food is delivered by another charity, The Felix Project, which collects food waste from London retailers.

Menus vary, explains Clavijo. “We cook vegetarian meals. It is easier, safer and more inclusive than cooking with animal protein. It allows more people to access it too.” A typical menu will be balanced with enough vegetables and some carbohydrates; pasta or rice get alternated. Sometimes they might cook big pots of curry but they have to be careful with spices. Some communities might love spiced food, others not so much and they need to make the best use of the food on offer so that nothing gets wasted. Normally there will be a simple pasta and tomato dish for the children or “mac and cheese and mini-pizzas” which always go down well. 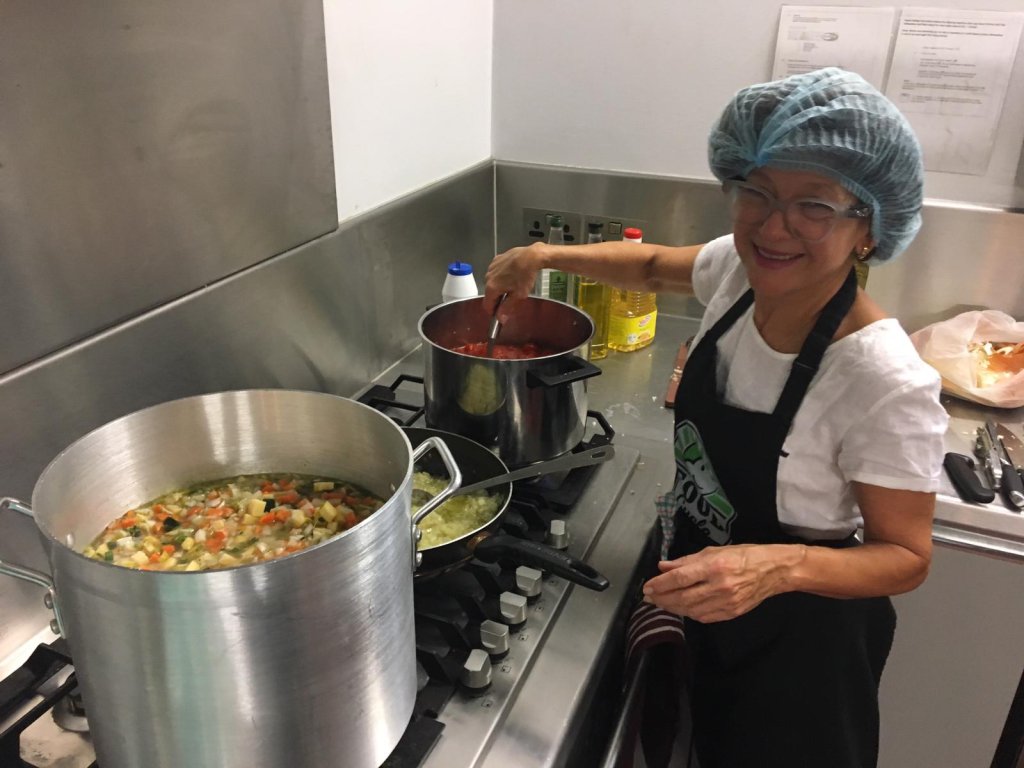 Clavijo would love one day to cook food from his native Venezuela, like Arepas, a kind of maize dough flat bread which Venezuelans tend to eat with cheese, meat, black beans or sweet fried plantains. However, the logistics of making more complicated dishes in a fairly tight space, based on donations they receive, can compromise any ideas of very specialized dishes. Similarly, the cooks might want to try the favorite dishes of some of the bigger groups in the Happy Baby Community, like Nigerians or Albanians, but with a limited time frame and a lot of food to be used up that can also be a challenge.

Each week, FoodCycle feeds around 1500 people and uses about three tons of food. Over the last 10 years, they have served over a million meals and saved 425 tons of surplus food. “FoodCycle cooked its first ever meal in 2009 in London,” explains Camilla James, FoodCycle’s Marketing and Communications Manager in London. The founder, Kelvin Cheung, saw how much food waste and food poverty there was and wanted to unite these two issues. “The by-product of that is the community aspect,” clarifies James.

“There are so many people who value the opportunity to sit down and eat with other members of their community. They may otherwise be alone or struggle to access food in general.” The 38 projects around the UK have been set up in places where people tend to be on a low income and migrants and refugees are often among their guests.

Anyone is free to turn up at FoodCycle and access a free meal. "Having a place where you can turn up without anyone asking any questions is really important [for migrants],” thinks James, because they are often waiting for papers or used to being questioned before they can access any service.

FoodCycle also translates their leaflets into several languages so they can reach as many people as possible. In the latest guest surveys from 2018, four percent of respondents said they were migrants or refugees. The figure has doubled since 2015. "There may well be more who are accessing our services,” thinks James. 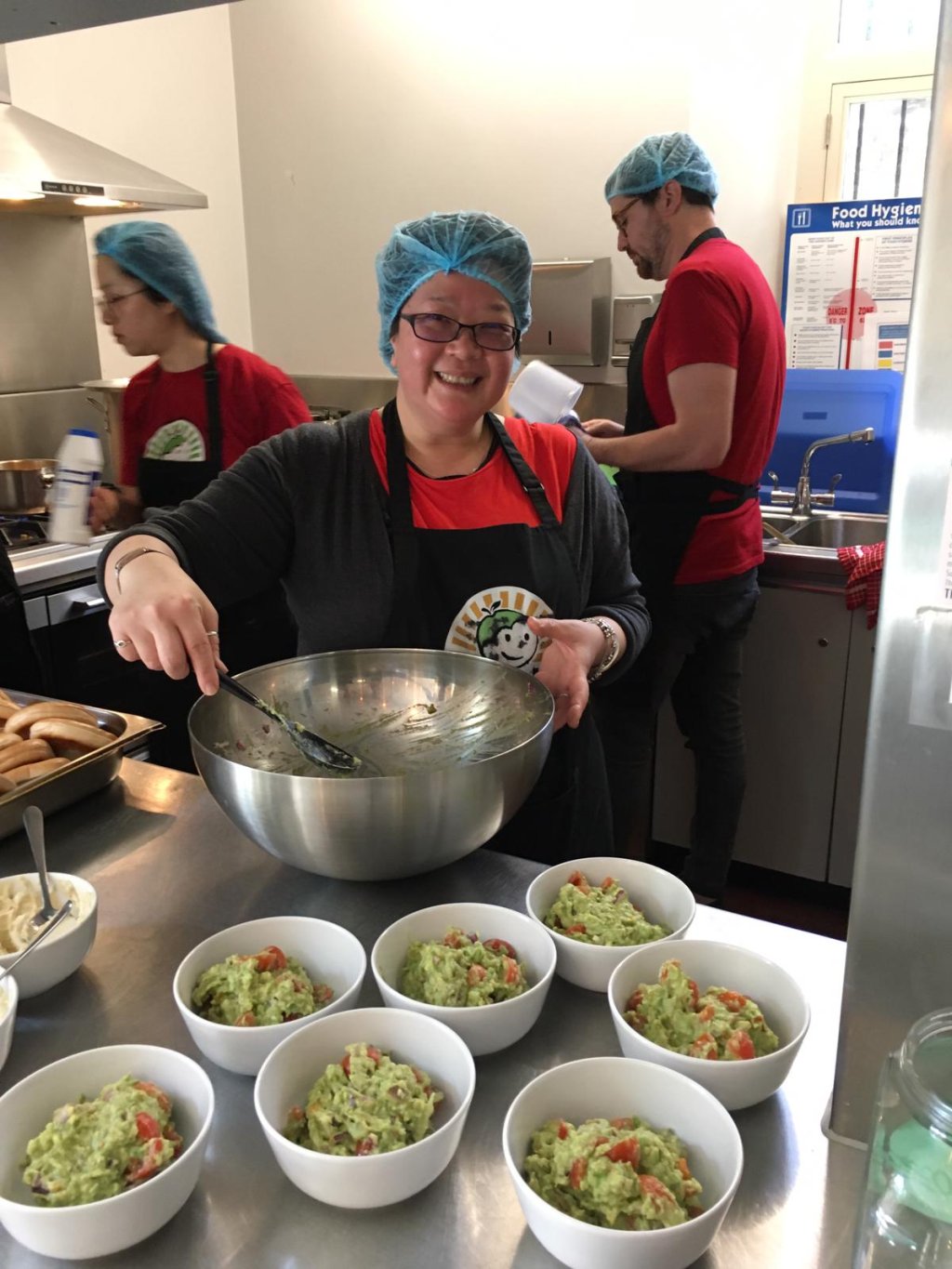 The volunteers don't necessarily have much cooking experience, and some volunteers used to be guests at the project and loved the experience so much that they wanted to join the volunteering team, explains Rosy Reeves who works as Marketing and Communications Officer.

“We don’t want people to feel like it is a charity and they have come for free food. It is all about the enjoyment everyone gets from sitting down together. Food is a great leveler and it starts conversations. People can come for any reason and it is not our place to judge why somebody comes. It is not just the guests that get something out of it, the volunteers do too,” says James.

Clavijo agrees, saying the group of volunteers he works with come from all different backgrounds and it is a really fun activity to take part in. “Some are passionate about food waste and others are passionate about the social side of it, so there are different reasons for people to get involved. A lot of volunteers come to FoodCycle for the same reasons as our guests,” explains James.

“Perhaps they live alone, perhaps they have just moved to a new area and want to meet new people. Some others might have lost their job and they want to gain confidence again. We had one volunteer who used to be a chef and he’d become jaded. Cooking for people who needed these meals put the joy back in his work again. So everyone comes to it for their own reasons,” James concludes. Food and migration are intrinsically linked thinks Clavijo. “First of all because many people migrate in order to be able to feed themselves. I have seen this first hand with people from Venezuela. Food is very important to a lot of us culturally too, beyond sustaining basic nutrition.”

At the Happy Baby Community, the volunteer cooks don’t have quite as much interaction with the community as at other FoodCycle projects due to the fact that many of the women have lived through traumatic experiences. However, there is some interaction and FoodCycle also works with a few volunteer mothers from the Happy Baby Community. Trust, it seems, has been built up on both sides the cooks and their guests seem comfortable in each other‘s company. With children dancing between the tables as the cooks lay out the meal. 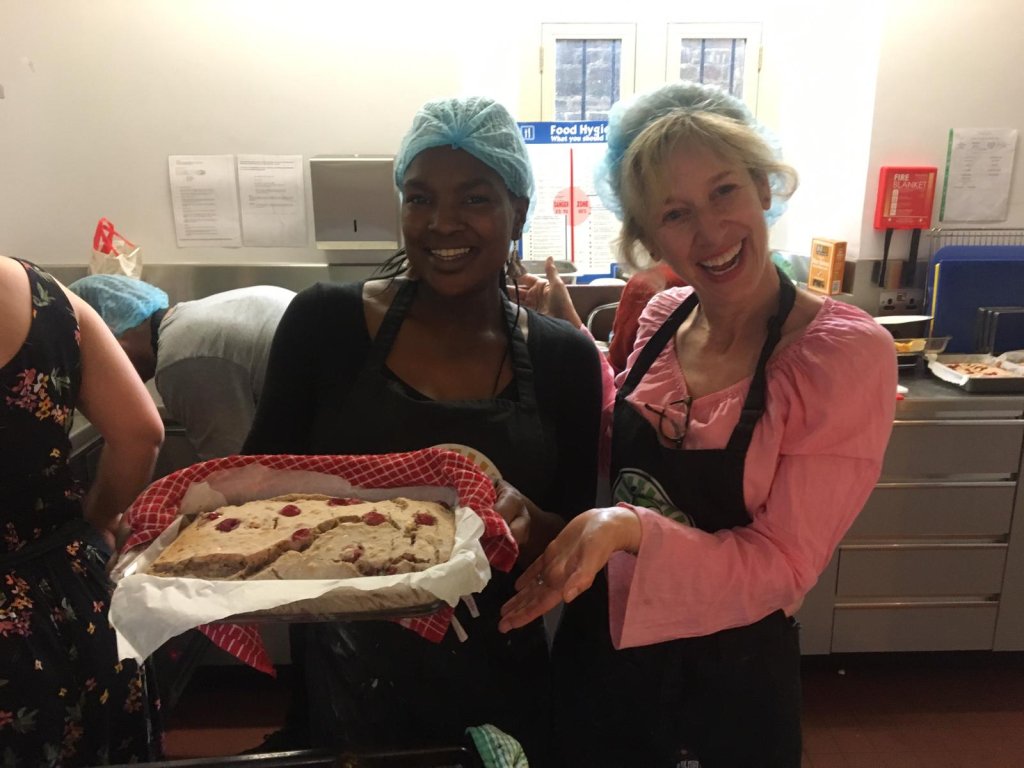 Clavijo has had a very positive experience of migration in both the UK and the US. He thinks London is “incredibly diverse and overall very very welcoming of people.” However, he also realizes that that experience is not always replicated across the UK. The work he has done as a volunteer has increased his awareness of the issues surrounding food and migration. His partner is an academic researcher working on a project linked to migration and they often “kick around” ideas about setting up a project in London which links food and migration for the future.

The need for projects like FoodCycle will continue to grow, thinks James. In an ideal world, of course, she would love that everyone had enough money and no one needed help accessing a nutritional meal. Even then though, James thinks that FoodCycle’s creation of community would justify its existence. “79 percent of our guests say they have made friends, you go to a FoodCycle meal and you see people from all different backgrounds sitting together and that is a really important part of what we do. Places like this give people a chance to speak to someone new [and cross the economic and social divides which exist in society.]”