Being a refugee with a regular income can be expensive: German municipalities make refugees with personal earnings pay part of the rental fees if they live in shared accommodations. Hundreds of euros for a bed in a shared room are the norm. Researchers and refugee advocates criticize a lack of transparency and asylum seekers' little influence on their accommodation due to the difficulty of finding a regular apartment.

German administration authorities call them “wrong occupiers” (“Fehlbeleger”):  Recognized refugees who are unable to find accommodation on the housing market and thus continue to live in shared refugee accommodation. Normally, shared homes are only meant to house new arrivals.

The "wrong occupiers" are required to pay standardized rental fees listed in the “Gebührensatzung”. Several hundred euros for a sleeping berth in a four-bed room is not uncommon. These fees are often unproportionally higher than regular rent for a private apartment.

Although there are no figures on how many people in Germany are affected, "this area of conflict isn’t new," said Bernd Mesovic, head of legal policy at German NGO Pro Asyl. Many municipalities "get a lot of money out of the refugees," said Mesovic. He added that the foundation of the practice was a state-level local tax act ("Kommunalabgabengesetz"), against which there is hardly any legal means.

Refugee councils, meanwhile, demand socially acceptable scales as well as a markdown for families with children.

Per state law, municipalities are obliged to request fees from recognized refugees and those already employed for their accommodation in refugee homes or rented apartments.

Compared to average rents in a given place, these fees are very high. That’s because most statutes determine a flat rate (“Pauschalbetrag”) per person. If all operational costs are added up and reallocated -- for instance for the security service, maintenance and write-offs -- this can result in high amounts per person.

The German Association of Towns and Municipalities (“Deutscher Städte- und Gemeindebund”), meanwhile, defended the controversial practice. “The fee is calculated based on the actual costs of the accommodation,” spokesperson Alexander Handschuh said. In other words: All actual costs the cities and municipalities have to bear.

According to the refugee council of the German state of Lower Saxony, a 12-square-meter room in the city of Neustadt costs €622 per month.

In Garbsen near Hanover, the price on the fee schedule is €855; in nearby Hemmingen, it’s even €930; and in Frankfurt, the maximum amount is €710, although the city reduces the fee for pupils, apprentices and students.

A rare exception from this procedure is the county of Harburg south of Hamburg, where the fee is €180 per month for persons with an earned income. Children younger than eight years must pay €70. Although these comparatively lower fees do not cover the expenses, they are politically intended, says the local administration. 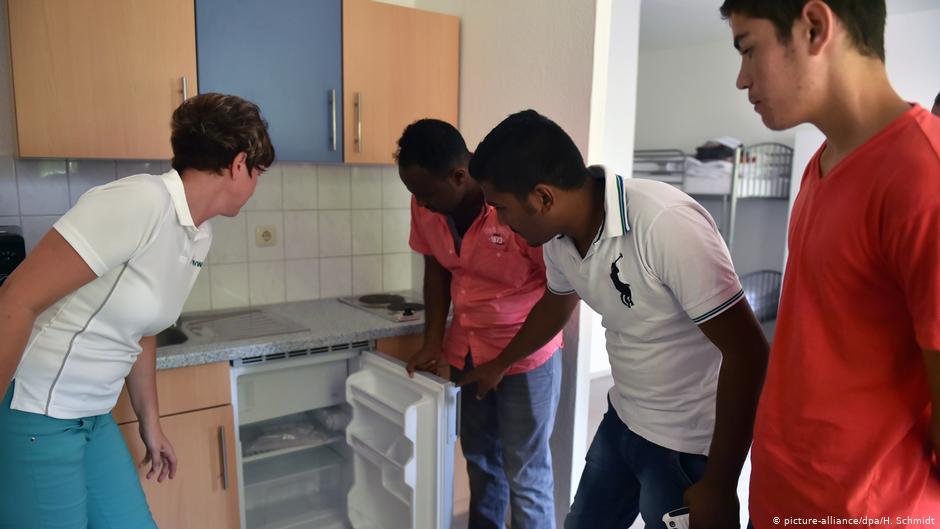 Lack of influence and transparency

“Those affected have no influence whatsoever on where or how they are being accommodated as per the state reception law [Landesaufnahmegesetz],” said Timmo Scherenberg of the refugee council in the state of Hesse.

Since refugees had a hard time finding an apartment in metropolitan areas, Scherenberg said, they often “had no choice but to stay in the assigned shared accommodation - at relatively absurd prices.”

Scherenberg advocated for a cost ceiling pegged to the sum the social welfare office would cover in Hartz IV unemployment benefits. He also called the current arrangement a “negative incentive to take up work.”

Social scientist Ulrike Hamann said the problem will persist in all states as long as refugees are housed in accommodations instead of apartments. Hamann said that’s due to the system itself, for refugees don’t enjoy tenancy laws but are “at the mercy of intransparent costs set by the operator without being able to assert own rights.”