The Refugee Journalism Project (RJP) was set up in 2016 in London to support migrant, refugee and exiled journalists kick start their careers in the UK. Its idea is to create a network for its participants and hook them up with mentor journalists. The initiative is coming to the end of its second year and is about to start recruiting for a third intake, project director Vivienne Francis explains.

The Refugee Journalism Project (RJP) aims to help refugees and migrants gain a foothold in the British media landscape. Participants are offered monthly workshops and seminars at the London College of Communication, the University of Derby; with the Guardian Foundation, Google News Initiatives, and the Refugee Council. The course covers a long list of set modules including news writing, multimedia journalism, research and newsgathering, visualization, and employability skills; as well as UK media law and ethics; what makes good writing? trauma and journalism; video and editing; radio production; social media and content management and data journalism. It's a way to refresh journalistic skills but moreover, participants benefit from the networks the RJP helps to create and build. Each session covers core skills and competencies that are used in the journalism industry.

“Even when the course is ended, I always encourage people to stay in touch,” says Vivienne Francis, the project director of RJP. "We want to get a reputation for having a network and when someone calls up and says, ‘do you have someone who can speak Swahili?’ I can say, ‘actually yes I do!’” Francis, based at the London College of Communication, is sometimes contacted by British media seeking journalists with particular skills. She can then refer to former RJP participants.

The RJP sets up its participants with mentor journalists who work with them on their storytelling and can sometimes also offer them a way into the British media.The course offers, wherever possible, placements and internships to its participants, matching skill-sets and expertise to organizations.

That was the case for Ziad Ghandour from Syria. A graduate from the first intake of the project, he has already landed a job as a Radio Broadcast Assistant at the BBC. “The idea of telling a story to improve things in the world inspires me,” recounts Ziad Ghandour on the RJP blog.

Ghandour arrived in the UK in a lorry via Calais in France. There, he recounts, he met the Irish humanitarian journalist Sally Hayden while she was reporting on the situation of refugees and migrants in Calais for Vice Magazine.

All you need are good ideas

Although many of the course participants have had quite high-flying careers in their own countries -- some have even been editors in chief -- others arrive 'just' with a desire to tell stories and a relatively good level of English. Francis explains that Ghandour didn’t have actual journalistic experience when he applied for the project; he had been studying for a masters in English Literature when he left Syria because of the war.

“What he had was a lot of energy and good ideas. He can learn the rest on the job at somewhere like the BBC," Francis clarifies. What we brought to Ziad was awareness of what the possibilities are…” and the contacts. 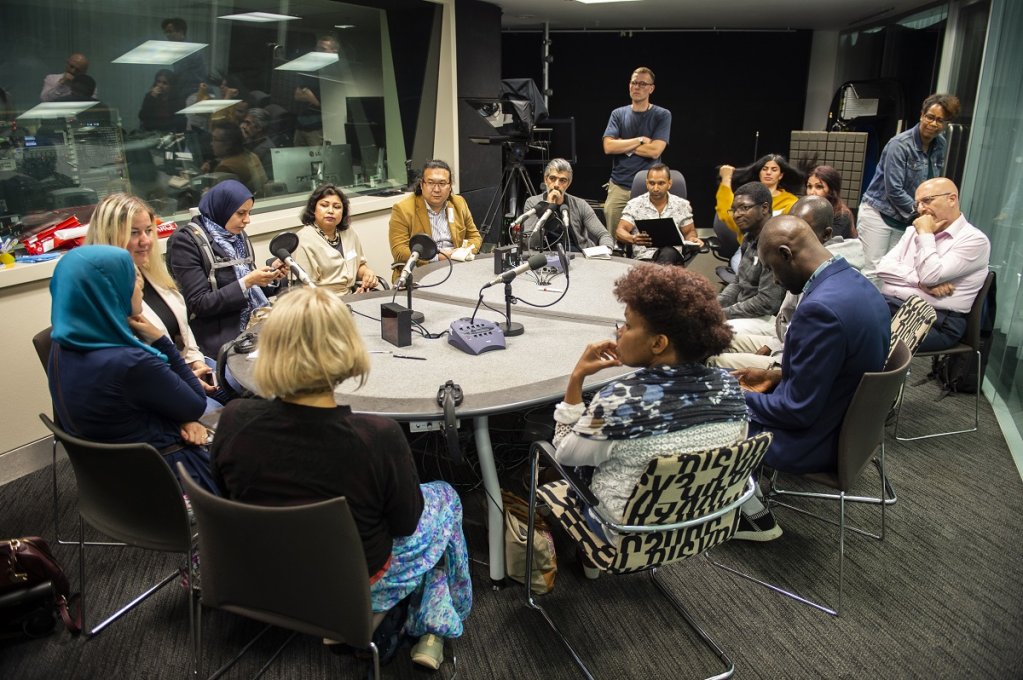 Ghandour credits the RJP with giving him confidence in his abilities and reassuring him about his language skills too.

Ghandour got his very first job in the UK via one of his mentors, Samira Shackle, assistant editor of the New Humanist magazine. She passed on the tip that a film company was looking for a translator for their new documentary “Exodus: Our Journey to Europe” and as Ghandour declares: “I went for it and got the job!”

Francis does not ask for any formal journalism qualifications to take part in the Refugee Journalism Project. Although most have either journalistic qualifications or experience. In exceptional cases they might look at taking someone without any journalistic experience. Francis makes clear that the course doesn't offer a formal qualification (like a masters for instance). In fact, the project is still feeling its way towards the ‘perfect formula’ of how to structure the courses and what might work best for its participants -- a process in constant evolution. 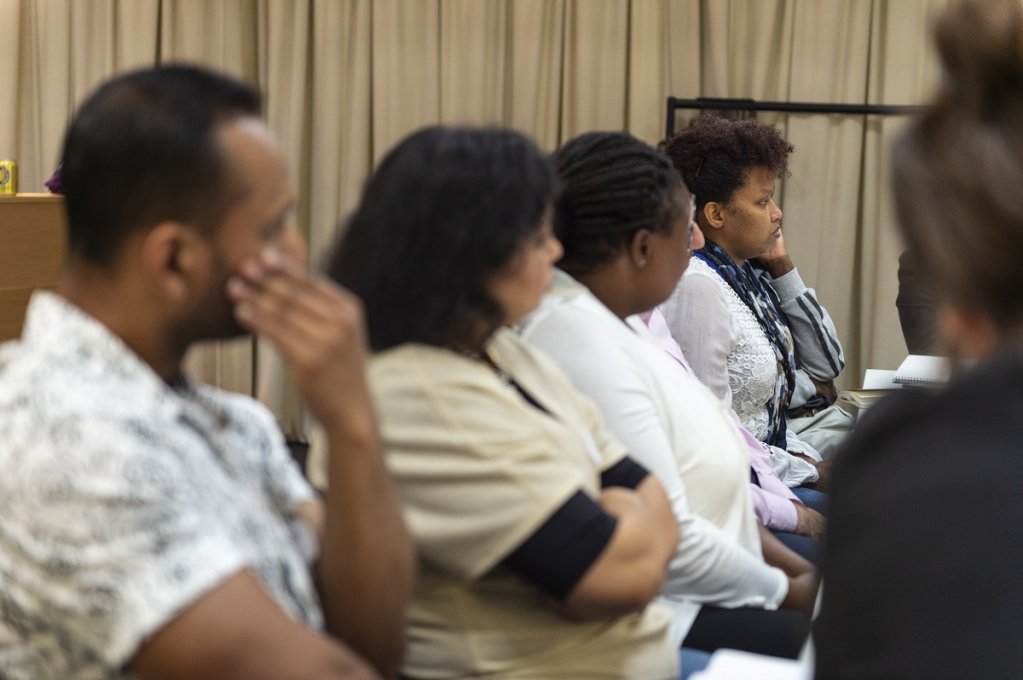 There are many challenges that Francis and her team have to take into account. Some of the refugee and migrant journalists have other jobs while they attend the course. This means they are not able to attend all the seminars and meetings over the course of the year. The structure is fairly informal to accommodate people’s needs. Some of the participants continue to do masters or PhDs. At the LCC, there is a scholarship available for refugees, but there is only one spot available per year.

Francis started her own career at the BBC, before entering academia. The idea for the project came from her. Francis explains that she had been working as lecturer at another university and teaching journalism students who were all keen to go and volunteer on Greek islands and in camps in Calais and write about what was happening regarding the refugees coming from Syria. The issue of self-representation is very important to her and she wanted to give refugees the chance to tell their own stories and not become a “spectacle.”

On top of teaching, Francis was also volunteering with the Migrant Resource Centre in London, an organization which has joined forces with Asylum Aid and offers legal advice and courses for migrants and asylum seekers. They had been doing various media projects “which were fun,” but Francis wanted to bring together her experience teaching people how to get into the media with giving something back to the refugee and migrant community.

The last seminar of the course was held in July at The Guardian Newspaper. It was a masterclass in podcasting. At the university, explains Francis they offer more “hands on” courses which are “workshop oriented. They recently did some camera work, so everyone learned how to use the camera right through to making a short film.”

For the future, the RJP is exploring the possibility of collaborating with other projects in Germany or France. "We’d like to see how we can incorporate the work of the different projects under the umbrella of collaborative journalism.” They will start recruiting for the third cohort in January 2020 and the course will start in March 2020. 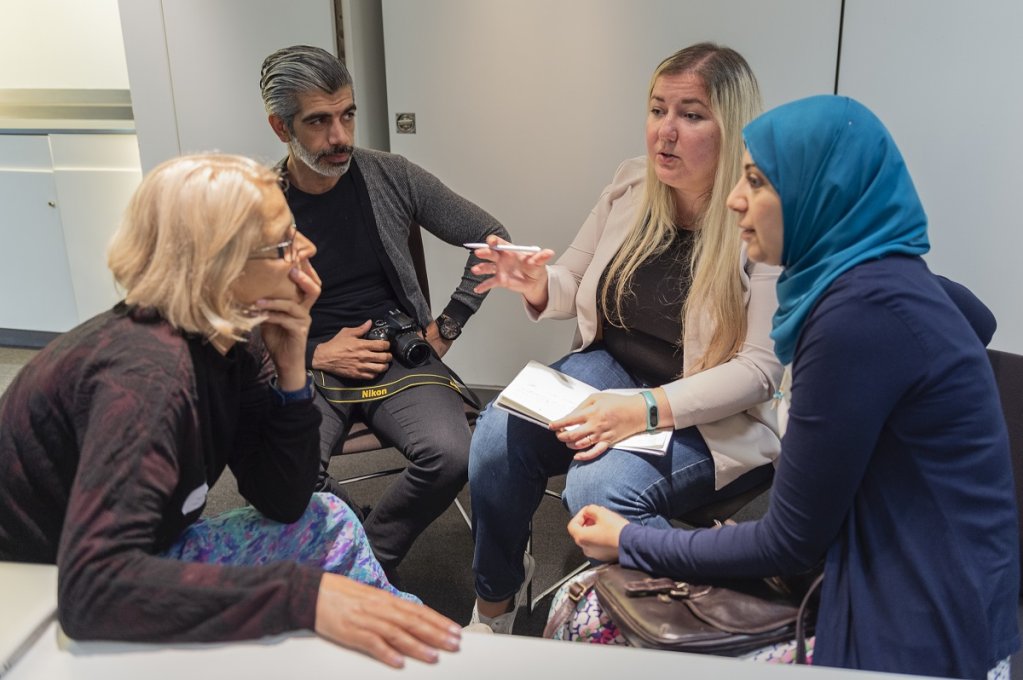 An important aspect of the course is the confidence it helps to build. "Many in the group have been through such a difficult time in their home countries, the journey over here, going through asylum. Their professional identity and confidence and well-being have been completely stripped from them," Francis explains. That's why she wants to combat these social challenges and restore their confidence.

Francis describes watching the transformation over the course of a year and seeing that professional dignity returning. Her voice warming, Francis concludes, “They meet with people on a like-minded basis, their skills and professional background are respected and they have fun.”

Over the last few months we have been featuring stories about refugee journalists, several of them took part in this project.

You can read Zozan's story 'Call me by my name' here

You can read Ernest's story 'Turning negatives into positives' here