A court in Augsburg has fined a refugee from the Chechen Republic after he shared a DW article on his Facebook page. According to the ruling, he propagated the insignia of the Islamic State group.

When Mokhmad Abdurakhmanov, a Chechen refugee living in the Bavarian city of Augsburg, shared a DW article on his Facebook page last year, he never imagined he'd end up in legal trouble. But this week a court in Augsburg fined him €1,350 ($1,500) for two Facebook posts. One of them was a DW story detailing how fighters from the Islamic State group obtain weapons.

In March 2018, Abdurakhmanov shared the Russian version of the story that had originally been published on DW's German page in February that year. The article featured a third-party photo of a group of Islamic militants wielding assault rifles. "I don't know who supplied what and where, but those are Kalashnikov rifles in the photo," Abdurakhmanov wrote in his post.

The court took issue with the IS logos displayed on the black caps worn by two of the militants in the photo. Both the Islamic State and its insignia have been banned in Germany since 2014. At the same time the court had no claims against DW, which had inserted the picture in the article.

Guilty for propagating the IS logo

In addition to sharing the DW article, Abdurakhmanov was also fined for reposting two short videos of Israeli soldiers baiting a Palestinian boy with dogs. The video on Facebook is preceded by a warning that it might contain scenes of violence. Abdurakhmanov did not leave any comment beneath the video.

At the trial, which took place on Monday, the court found him guilty of propagating the logo of Islamic State and violating human dignity by posting the videos. The ruling followed a longstanding legal battle after a court previously found him guilty of the same crimes in November last year. Following the second hearing in Augsburg, which was open to public this time, Abdurakhmanov's fine was raised.

80 shares, only one prosecution

Speaking outside the court, the defendant's lawyer, Johanna Künne, said that fining somebody for reposting a critical piece of journalism seemed absurd not only to her and Abdurakhmanov, but also to "everyone I have talked to." She noted that two similar lawsuits that had been opened in Germany in the past were dismissed.

After the hearing in November Künne demanded that the court overturn its previous sentence. She pointed out that by reposting the article about the Islamic State group her client wanted to show his negative attitude to this organization. She is also convinced that the court didn't take into consideration that the photo used to illustrate the article appeared on Abdurakhmanov's page automatically, which always happens while reposting on Facebook.

Künne pointed out that more than 80 people had reposted the DW article but that only Abdurakhmanov was being prosecuted. In addition, according to the lawyer, the Islamic State group logos featured on the picture are so small that the police had to enlarge the screenshot of the photograph while examining it. This, Künne said, supports the defendant's argument that he did not notice the insignia.

Refugees fighting for asylum in Europe

However, the judges remained unmoved and increased Abdurakhmanov's fine by another €225 at the second hearing. The fine leveled against the Chechen refugee greatly exceeds the monthly allowance he and his family receive. 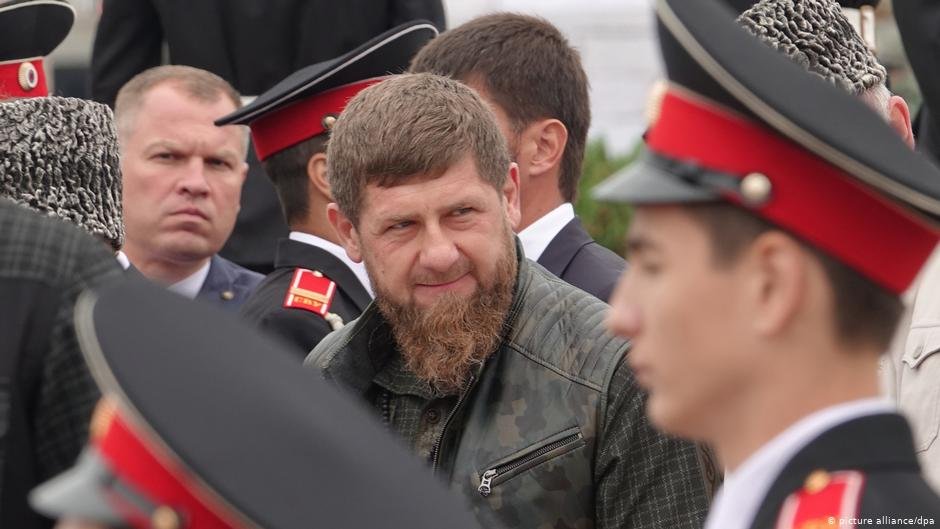 In 2015, Abdurakhmanov's brother Tumso, a blogger and harsh critic of the president of the Chechen Republic, Ramzan Kadyrov, was detained and threatened by Islam Kadyrov, the president's close relative and a high-ranking Chechen government official. As a result, Mokhmad and Tumso Abdurakhmanov were forced to leave the country. Following their denial of refugee status in Georgia, they made for Europe. However, Tumso's conflict with the Chechen authorities only escalated, with Magomed Daudov, the speaker of the republic's parliament and a Kadyrov ally, threatening the blogger with blood revenge.

Now that he has been refused asylum in Poland, Tumso is facing imminent deportation. His case is currently pending in the country's Supreme Court. Mokhmad Abdurakhmanov is also appealing against the German government's decision to refuse him refugee status. His attorney is concerned the trial against him might affect his future. "The court case painted him in false colors," Künne told DW.

Abdurakhmanov believes the German government's judgment was clouded by prejudice on account of his Chechen nationality and Muslim faith. He told DW after the hearing that he had received a notice from the local police department saying he had been monitored for four months and a raid had been carried out on his apartment. Nothing illegal was found during the search, however. Abdurakhmanov and his lawyer intend to appeal the Augsburg court's decision.