More than 150 migrants crossed the border fence separating the Spanish overseas enclave of Ceuta from Morocco on Friday. It was the biggest attempt to cross the heavily guarded barrier in a year.

At least 155 migrants from sub-Saharan Africa entered the Spanish enclave of Ceuta after climbing over fences or walking across a border post separating the territory from Morocco, authorities said Friday. In total, 250 migrants attempted the crossing and 90 were arrested. At least six Spanish police officers and nine migrants were slightly injured and taken to a hospital.

Seven of the migrants clung to the top of a 6-meter-tall (19.5 feet) fence for over two hours until law enforcement officers brought them down and handed them over to their Moroccan counterparts, said the Spanish central government's delegation in Ceuta.

A group of migrants was later shown sitting on the ground surrounded by police. Some had cuts from razor wire, others were washing their eyes with water after apparent contact with tear gas.

Video footage showed a large group of shirtless young men chanting "Boza!" - meaning "victory" in Western Africa's Fulani language - as they walked or ran toward a temporary migrant processing center. The migrants typically stay there while they apply for asylum or wait for an opportunity to travel to mainland Spain.

Simultaneously, a larger group of around 250 migrants attempted the breach at a breakwater where the 8.2-kilometer (5-mile) double fence meets the sea. Most of them were from West Africa's Guinea. 90 migrants were arrested immediately, according to Morocco's official news agency MAP.

The autonomous Spanish cities of Ceuta and Melilla on Morocco's northern coast have the European Union's only land borders with Africa. Separated from Spain by the Strait of Gibraltar, they are therefore the only way to enter the EU from Africa without crossing the Mediterranean. As such, they are a magnet for African migrants trying to reach Europe in search of a better life.

Each of the two Spanish territories is surrounded by a fence around six meters high. The Ceuta fence is eight kilometers (5 miles) long and six meters (20 feet) tall. Shreds of clothing lost during previous attempts to climb it hang from the razor-sharp barbed wire, like a warning for others. The boundary in Melilla is smaller than in Ceuta and further from Spain.

Friday’s mass irregular border crossing was the biggest attempt to scale a border fence in Ceuta and Melilla in a year: In August 2018, 600 migrants attempted to jump the heavily guarded barrier in Ceuta. 118 made it onto Spanish soil, but most were later returned to Morocco. More than 400 had crossed in the previous month.

The last major attempt before Friday's onslaught took place in Melilla this July when 50 of some 200 migrants who tried to climb the security fence there managed to enter the enclave.

According to the International Organization for Migration (IOM), about 7,000 people crossed the border irregularly from Morocco into the two Spanish enclaves last year. That number represents nearly 11 percent of the total number of about 65,000 irregular migrant arrivals to Spain, more than double the figure for 2017. 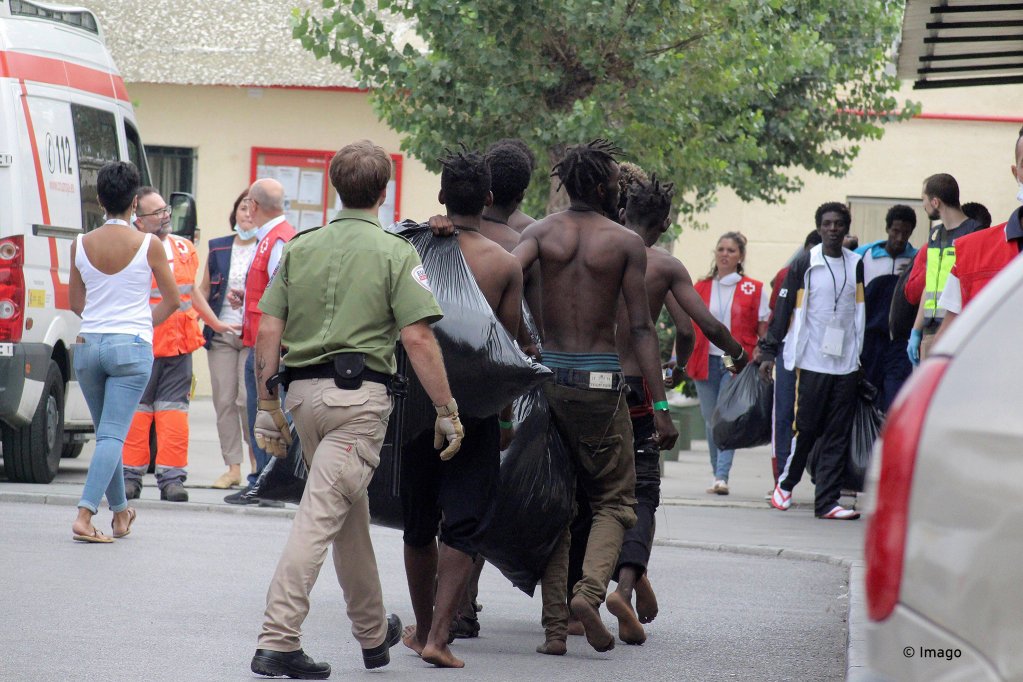 15 migrants arrive in Spain by boat

The incident at Ceuta took place on the same day a separate group of 15 migrants rescued at sea by search and rescue (SAR) vessel Open Arms arrived in the mainland port of San Roque aboard a Spanish warship from Italy.

After a prolonged stand-off between Italian authorities and Spanish-registered Open Arms, which had rescued around 150 mostly African migrants at the beginning of August, the remaining 80 passengers were allowed to disembark in Lampedusa on August 20.

Spain’s caretaker socialist administration has drawn criticism at home for its handling of the rescued migrants after Italy's refusal to take them in. Some parties criticized the government for accepting the migrants rejected by Italy, while others criticized it for not doing so more quickly.

Far-right party Vox was quick to blame the administration's soft stance for triggering the Ceuta incident, by creating what it labelled "a call effect". The government, on the the other hand, said the Ceuta incident was prompted by migrants there taking advantage of thick fog.

Cabinet spokeswoman Isabel Celaa responded by saying the number of irregular entries into Spain was down 47 percent this year.

In recent years, hundreds of thousands of migrants per year attempted the journey to Europe from North Africa, with thousands dying at sea. This year alone, 909 migrants have died in the Mediterranean (as of August 29), according to IOM.

Although tougher enforcement has brought the number of arrivals down in the past few years, attitudes to migrants have become one of the main faultlines in European politics. The divisive issue has arguably contributed to the rise of far-right, anti-immigrant parties like Germany’s AfD (“Alternative for Germany”).