Italian authorities on Monday seized the German rescue boat Eleonore. The rescue boat had been stranded at sea for a week with over 100 migrants aboard. Meanwhile, 31 migrants aboard the rescue ship Mare Jonio were also allowed to disembark on Lampedusa.

German search and rescue (SAR) vessel Eleonore received permission to dock at Pozzallo port, Italy, on Monday, after it had violated a ban on entering Italian territorial waters. The ship subsequently disembarked the more than 100 migrants it had on board.

Seegezwitscher, a Twitter account that provides information from onboard the Eleonore, said the Italian police authorized the vessel's arrival in Pozzallo, a port town on the island of Sicily.

"The Guardia di Finanza communicate[d] to the captain that the ship can arrive at port and the rescued persons can disembark. The ship will then be seized for further investigations," it tweeted.

The account posted images showing a Guardia di Finanza unit approaching the Eleonore and officers boarding the vessel to speak with captain Claus-Peter Reisch. Other tweets showed migrants disembarking as well as Reisch getting into a police car.

A spokesman for the Mission Lifeline charity, which operates the Eleonore, confirmed the content of the tweets from Seegezwitscher. Mission Lifeline's previous SAR vessel, the Lifeline, is still stuck in Malta.

Meanwhile, Italian NGO Mediterranea Saving Humans announced on Monday that its own SAR vessel, the Mare Jonio, had been allowed to disembark the remaining 31 rescued migrants. The Italian charity tweeted that the Italian coast guard approved the disembarkation from the Mare Jonio "for health reasons" on the Italian island of Lampedusa, some 280 kilometers south of Sicily.

Captain declared emergency
Early on Monday, Eleonore captain Reisch had communicated to Italian authorities the decision to make an unauthorized entry into Italian waters because his ship was in a state of emergency.

Reisch announced on Twitter that bad weather forced him to bring the migrants to Pozzallo's port. 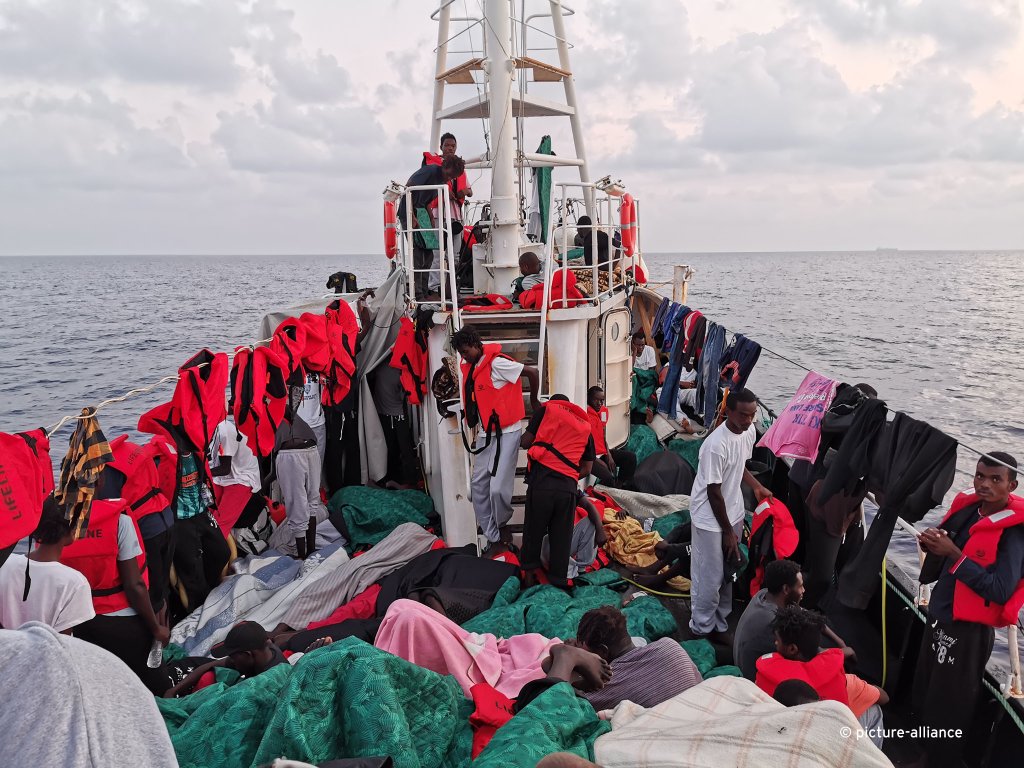 Seegezwitscher explained the state of emergency was declared after eight days at sea with the rescuees, and after a severe thunderstorm flooded the deck of his ship.

Italy has severe laws against migrant rescue charities, with fines of up to €1 million for breaching orders not to enter national waters. Interior minister Salvini spearheaded those laws, but he is expected to lose his job within days due to a change of government.

The center-left Democratic Party, due to enter the new government from the opposition, has vowed to water down or scrap Salvini's migration decrees.

Despite his likely departure from office, far-right interior minister Salvini tweeted a warning on Monday after the Eleonore entered Italian waters without permission. He wrote: "Laws and boundaries must be respected. If someone thinks of not caring about it without consequences, he has made a big mistake and has a wrong minister: I do and I will do everything to defend Italy."

Last week, Salvini had signed a decree banning both the Mare Jonio and the Eleonore from entering Italian waters.

German foreign ministry spokeswoman Maria Adebahr said Monday that Germany is in touch with Italian authorities and the German captain of the Eleonore.

Adebahr told reporters in Berlin that "a good and quick solution needs to be found for this case too," a reference to past deals between European countries to distribute migrants rescued at sea.

Last week, Germany's foreign minister Heiko Maas again insisted on a European solution for the rescue of migrants in the Mediterranean Sea. "Each ship with people saved from distress at sea that has to wait for days on the high seas to enter a safe port is one too many," Maas said.

With material from dpa, Reuters