‘LINK IT’: Profiling Syrian refugees’ skills for the job market in the EU

The UN Migration Agency IOM has just completed an EU-funded pilot project called LINK IT. The project intended to boost integration outcomes for Syrian refugees resettled in the EU; namely in Germany, Portugal, Romania and the UK. LINK IT focused on strengthening links between pre-departure and post-arrival integration support for refugees.

“When I talk to the Syrian refugees, I often talk about my own experiences,” explains Hoda Abokasm about her work as a cultural facilitator with the IOM in the UK. “I faced many similar challenges.”

Abokasm herself is a Syrian refugee. After graduating in English Literature in 2011 from Damascus University, she worked as a primary school teacher before being forced to leave because of the war. She left Syria in 2013, initially for Jordan, then Turkey; she finally made it to the UK in 2016.

In London, she is completing a Masters at the School of Oriental and Asian Studies (SOAS) in gender studies. At IOM, she and a fellow Syrian, Ahmad Rashad, are running workshops for Syrian refugees on arrival in the UK, offering integration support as part of the LINK IT scheme. The scheme aimed to pilot a skills profiling tool and develop new ways of supporting newly arrived refugees. 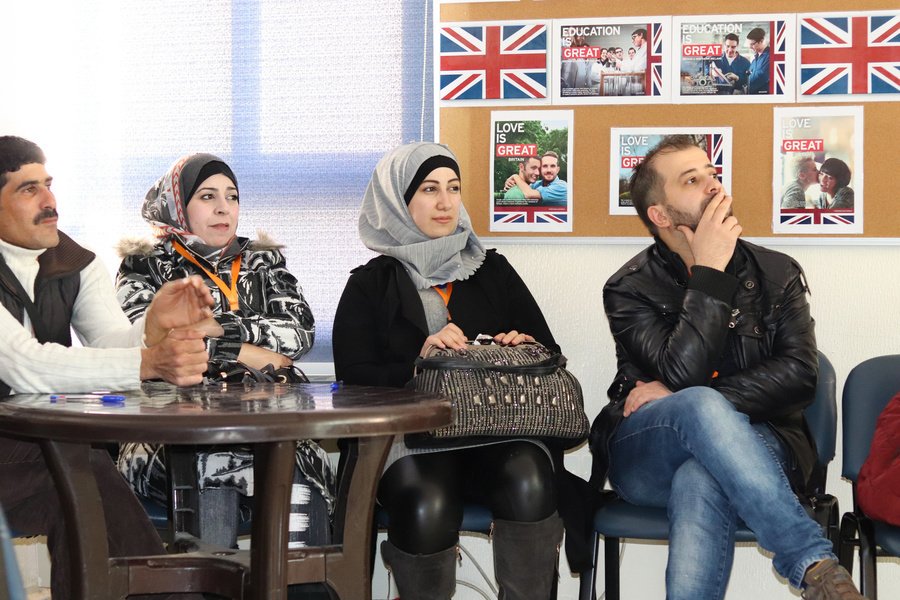 Lost in a new place

The LINK IT scheme aims to help Syrian refugees who are resettled to the UK, Germany, Portugal and Romania to identify the skills they already have and start to value them. “Part of the project is about looking for any skills the refugee has,” explains Abokasm, adding that “sometimes, refugees didn’t realize that what they had were skills." Participants are helped to write CVs and they are taught how society works in their host country, how to register with a doctor, and how to get the vital training they might need in order to be able to work and integrate. Workshops are given pre and post resettlement. 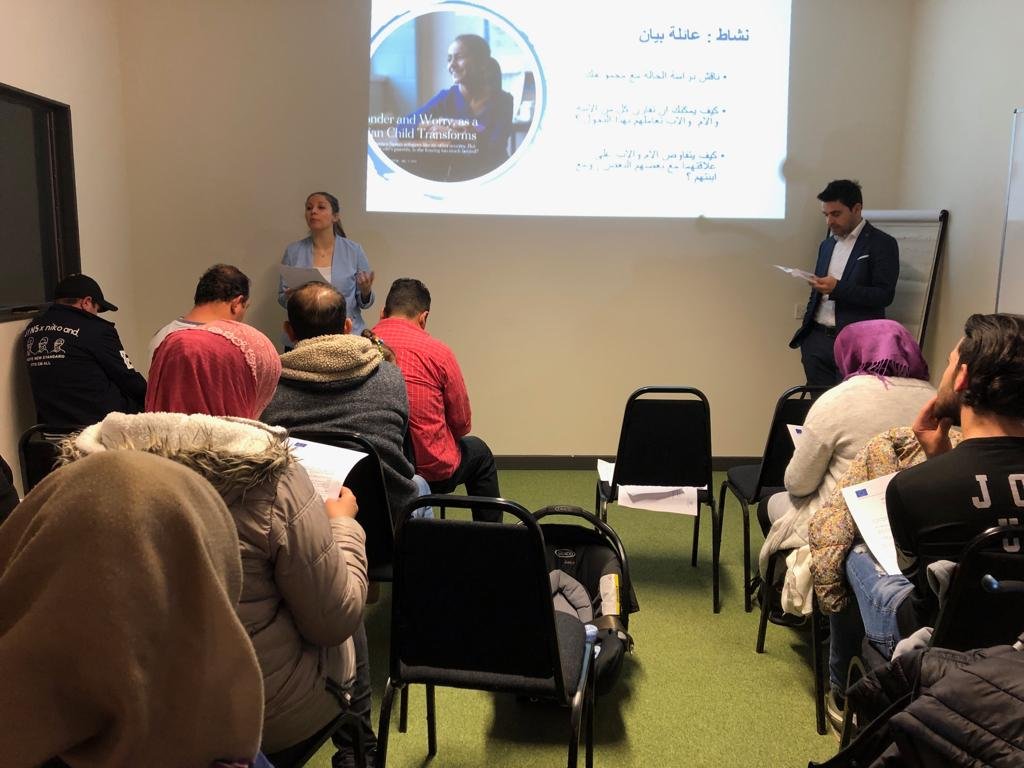 “We often start with an ice breaker activity,” says Abokasm. The team will ask the refugees to answer a question; it could be what their favorite food is? Or, where do they like to go on holiday? Or, what do they dream of doing? First they will be asked to write it with their dominant hand – then they answer the same question with the other hand. “This mirrors the experience of being a refugee in a new place,” says Abokasm, meaning: Things are harder to express, even though you are still the same person with the same skills.

“The first challenge is the language,” states Abokasm. Linked to the language though is a whole host of other challenges. How to find a job, where to find a job and whether or not someone’s qualifications will be recognized in their new host country.

The workshops do not only help to build confidence, but they also convey basic practical skills needed for applying for a job. “The process is very different in Syria. There are no cover letters there; even writing a CV is unknown to some people. That’s not how you get a job in Syria. If you want to start a business there then you just start it. The UK is much more regulated,” she concludes. 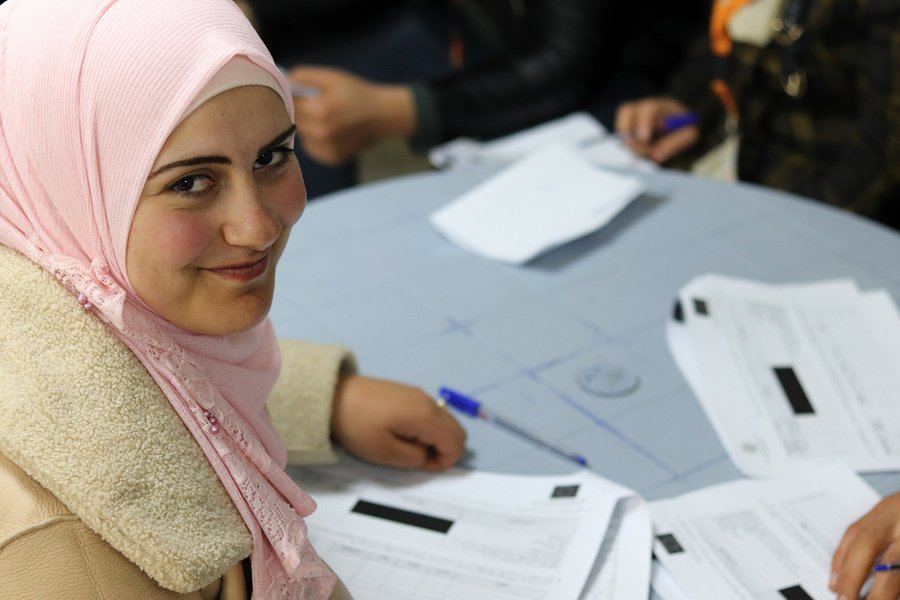 Of the 1000 refugees who participated in the skills-profiling scheme, the group was split fairly equally: 49 percent female and 51 percent male. Their ages ranged from 18-64; although the biggest contingent of participants was aged between 25 and 44. The refugees were profiled before they left Jordan, Lebanon and Turkey. IOM hopes that the data gathered prior to arrival will “help inform post-arrival integration policy measures.” 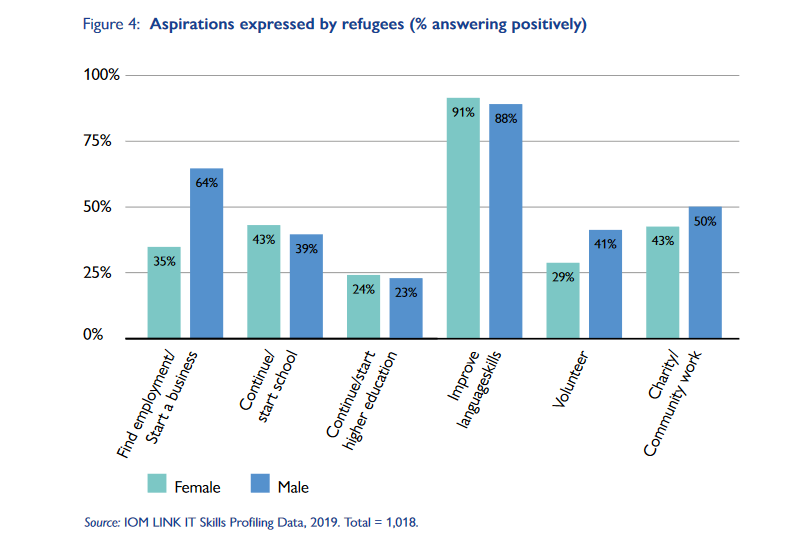 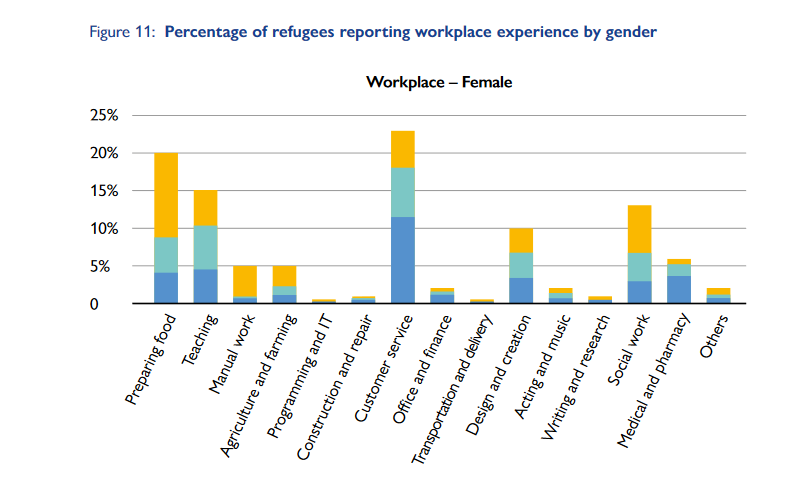 When it came to digital skills, most Syrians felt proficient in the use of smartphones and tablets. Between 50 and 60 percent of younger people felt they had strong computer skills but that figure dropped off significantly in the older age brackets. Similarly quite a low percentage of all age groups (between 5-20 percent) felt they had Microsoft Office skills and a slightly greater proportion felt proficient at online learning. 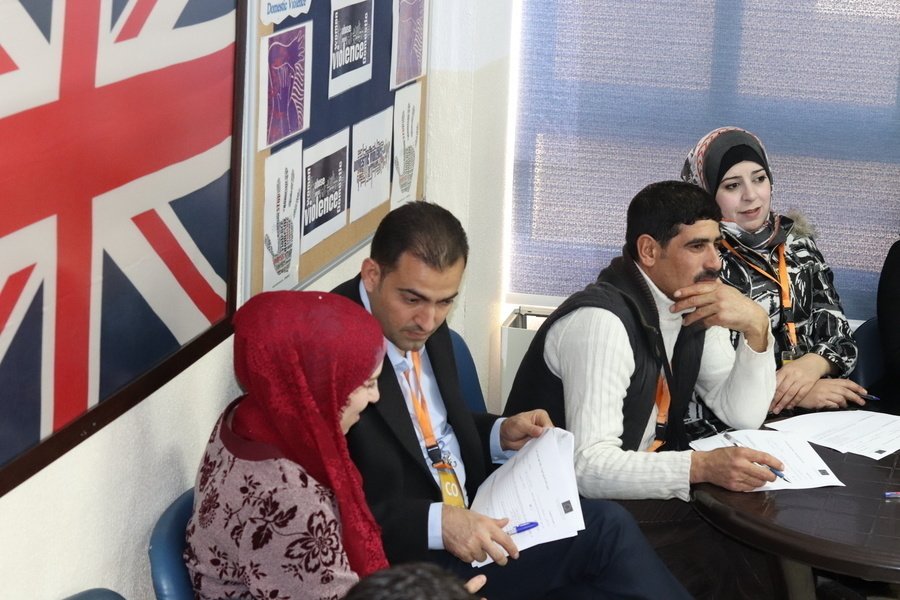 One of the biggest challenges facing refugees is trying to get qualifications recognized. The Link It project asked refugees to list skills that they acquired both within and outside the workplace.

Within the workplace, women tended to bring skills from the customer service, food, teaching, design and social work sectors. More men felt they were stronger in a wider range of jobs, adding construction and repair, agriculture and farming, transportation and delivery and manual work to the skills the women also possessed. 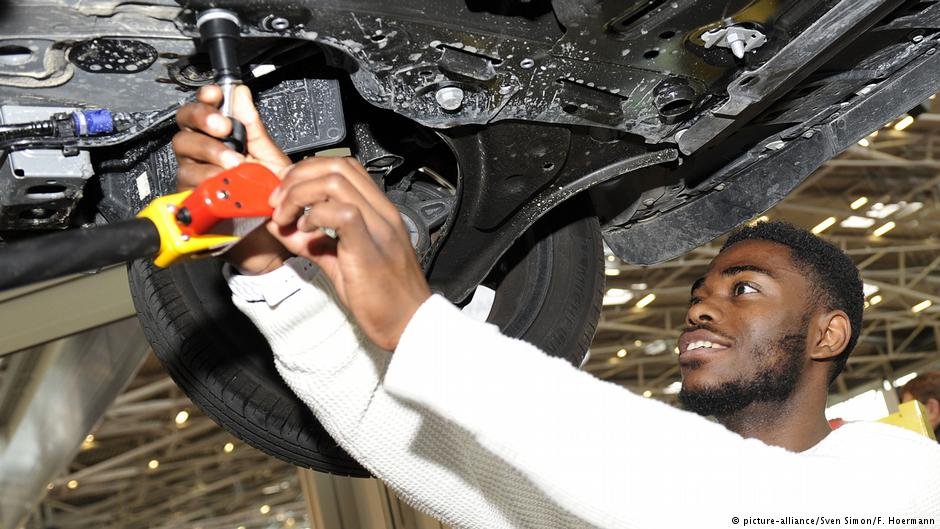 Despite all these skills, 2010-17 data from the Labor Force Survey found that only 56 percent of refugees had managed to find work. In fact, a paper from the University of Oxford from April 2019 found that the unemployment rate for refugees in the UK is estimated at 18 percent, “three times higher than that of the UK-born.”

That is why, in a separate scheme the IOM has joined with the UNHCR, Business in the Community, the Home Office and the UK Government in order to urge UK employers to start creating “refugee-friendly employment.”

In a set of guidelines “Tapping Potential” the group said that in markets with high employment levels, refugees could offer a diverse range of skills to potential employers. A survey of German employers found that 80 percent of those that hired refugees were “broadly or fully satisfied” with their work. Another study in the US found that refugees had a higher than average retention rate too. Addressing societal challenges can be good for business and also for attracting other employees. According to a Deloitte survey 60 percent of millennials wanted to join companies with a purpose (like helping refugees) embedded in their business. 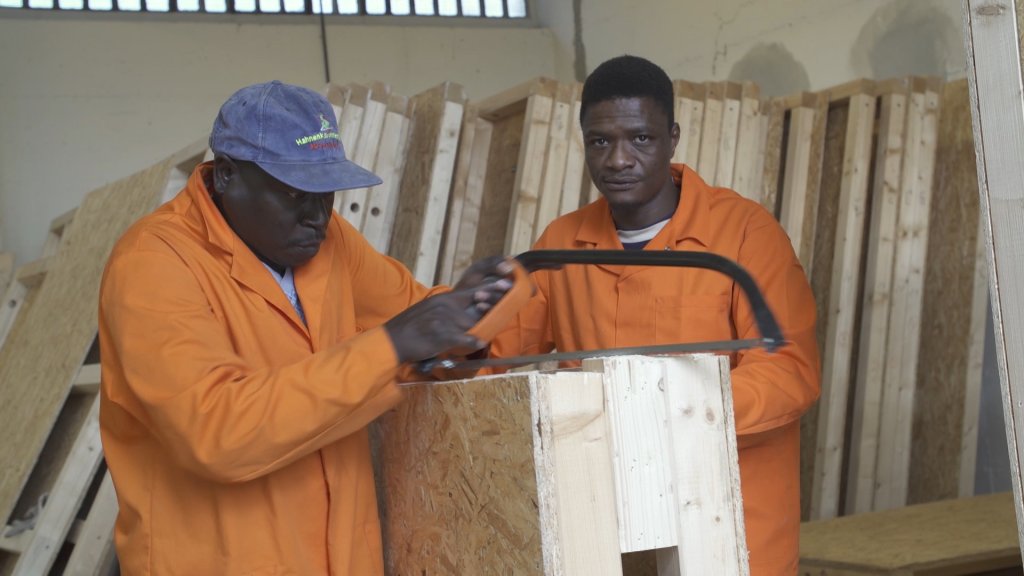 There are already some success stories. Biniam Haddish, 37 and a power engineer from Eritrea managed to secure a job in his field. He was taken on by the National Grid on a graduate scheme because he already completed an engineering degree 8 years previously. The company is now funding him to do a part-time masters degree and encouraging him to apply to become a chartered engineer as well as investing in leadership training for him. A doctor from Afghanistan who was an ear nose and throat specialist was granted a shadowing placement with the British National Health Service NHS which enabled him to work first as an audiologist. From there he worked towards obtaining professional registration and is now an ENT registrar within the NHS. 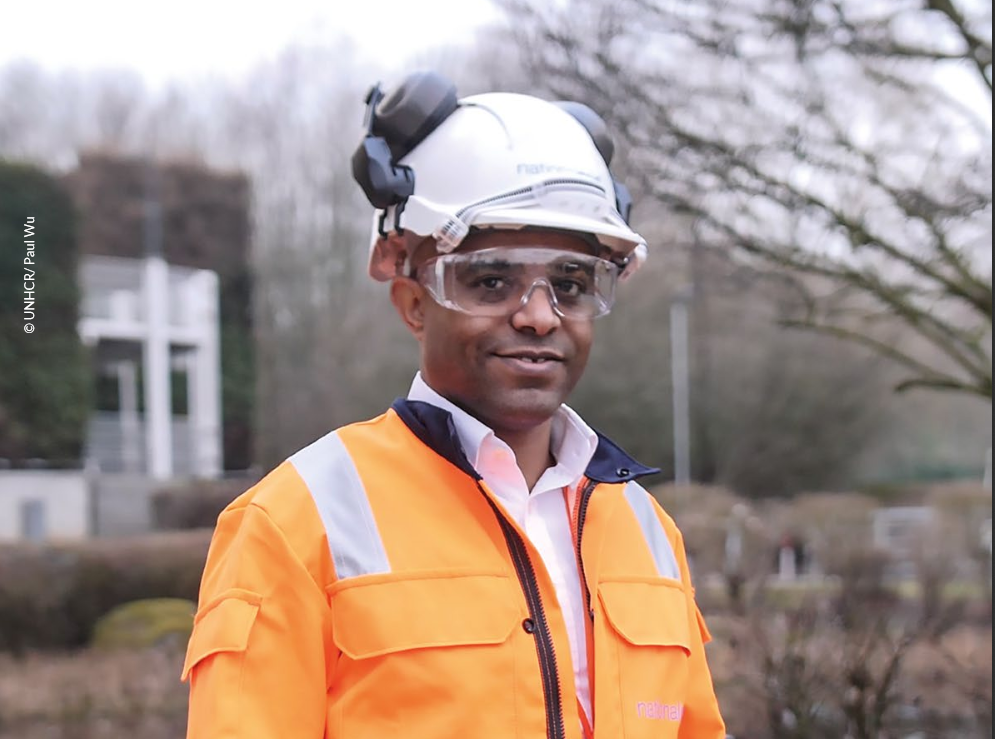 Abokasm is convinced that employment is the key to integration. She remembers how good it felt for her to get her first job in the UK with IOM. “When you have a job, when you feel someone has recognized your skills and qualifications and recognized you as a normal human being you feel like you are part of this new community and country. It feels like home.”

Her work, she says has taken her from feeling depressed and feeling alone when she first arrived in the UK to wanting to make the UK her home for the future. She thinks the sessions she delivers for LINK IT have set fellow Syrian refugees on that same path.

"We get lots of positive feedback from the course participants. They appreciate these sessions because they feel that there are people who care about them,” Abokasm concludes happily.