Migrant rescue ship Ocean Viking saved 50 people on Sunday from a rubber dinghy off Libya's coast after Libyan authorities, responsible for search and rescue in that area of the Mediterranean, didn't answer multiple contact attempts. Meanwhile, the crew of German NGO ship Alan Kurdi has reported a new suicide attempt among its rescued migrants.

Search and rescue (SAR) vessel Ocean Viking spent a rainy Sunday in the Mediterranean searching open waters for a fragile rubber boat overloaded with migrants before finally plucking 50 people to safety not far off Libya's coast.

Norwegian-flagged Ocean Viking, operated jointly by SOS Mediterranee and Doctors Without Borders (MSF), sent its own boats to pick up a pregnant woman close to full term, 12 minors and 37 men. All of them were from sub-Saharan Africa.

"God bless you!" one of the men told the rescuers as they passed life vests to the wet and barefoot passengers.

At least two people feeling ill collapsed upon arrival on the Ocean Viking, while three others were soaked in fuel and two were suffering from mild hypothermia. The operation was witnessed by an Associated Press (AP) journalist aboard the SAR vessel, which found the migrant boat some 14 nautical miles (26 kilometers) from the Libyan coast.

BREAKING: @SOSMedIntl and @MSF_Sea have just rescued 50 people from a boat in distress in intl. waters off the coast of #Libya. The rescue took nearly three hours to complete. 12 children under the age of 18 & one pregnant woman are among those now safely onboard the #OceanViking pic.twitter.com/orEXzK0IHN

It was an urgent call seeking help for the rubber boat carrying 50 people without a working engine.

The Ocean Viking, which was already in the Libyan SAR zone of the central Mediterranean, informed all authorities that it was beginning an active search for the migrant boat.

Throughout the morning, the charity ship chased several objects spotted on the horizon, including what turned out to be a floating palm leaf tangled with fishing gear and an empty small fishing boat.

All attempts to reach Libyan officials - the AP journalist on board witnessed at least three phone calls to the Libyan Joint Rescue and Coordination Center - were in vain.

The rubber boat with the migrants was finally spotted in the early afternoon on the horizon near a fishing boat, which did not respond to radio contact. The Ocean Viking then launched its rescue boats.

An hour later, Libya’s coast guard finally answered the phone and the Ocean Viking reported that its crew was in the process of rescuing the migrants. 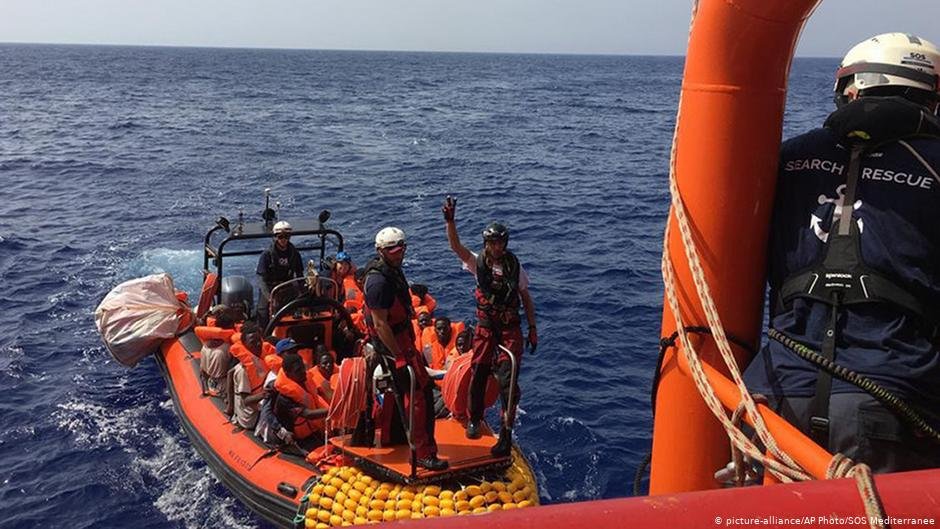 A European Union plane taking part in the Operation Sophia anti-human trafficking operation flew over the Ocean Viking, the migrant boat and the fishing boat multiple times shortly before the people were rescued.

As required by maritime law, the Ocean Viking asked Libyan authorities responsible for rescue coordination in that part of the Mediterranean to provide a place of safety to disembark the rescued migrants.

It also made the same request to Italian and Maltese officials. There was no immediate response.

International migration and human rights bodies say Libya is not a place of safety, while Doctors Without Borders does not consider any North African country safe for disembarkation of the migrants.

Yet for more than a year, migrant rescues performed by non-governmental groups have frequently led to sometimes weeks-long standoffs trying to get European authorities to allow migrants to be landed.

Meanwhile, the situation aboard another private migrant rescue vessel is apparently becoming even more serious. One of the eight migrants stuck on the Alan Kurdi has tried to jump overboard, German charity Sea-Eye, which is operating the vessel, said Sunday.

"One of the minors grabbed a lifejacket and tried to leave the ship," Sea-Eye spokesman Gorden Isler told dpa. On Twitter, he described the incident as a "suicide attempt."

The #AlanKurdi Head of Mission just informed me about another suicide attempt by a minor. Does someone have to be injured before the #RCCMalta takes #responsibility? How do you explain this irresponsible behavior @Armed_Forces_MT❓

Denied port entry by Malta and Italy, the Alan Kurdi is stuck about 25 kilometers southest of Malta, with eight people who have been on board since August 31.

Last Friday, Malta agreed to evacuate two migrants who were suffering from panic attacks and had repeatedly tried to jump overboard.

With material from AP, dpa