Uber Eats courier Abdul Manaf: 'It's more of a workout than a real job'

Abdul Manaf is a 36-year-old Afghan refugee who lives in Metz, in eastern France. A former interpreter for the French Army, he now makes his living as a bicycle courier for the food delivery platform Uber Eats. Come rain or come shine, the father-of-two sets out in perilous traffic on a daily basis and faces cut-throat competition from other couriers. This is his story.

I left Afghanistan in 2016, soon just after the French troops left. I worked as an interpreter for the [French] army there. The locals resented the job that I was doing and I was afraid the Taliban would come to my village.

Thanks to the years I spent working for the French government, I was able to bring my wife and children to France. We were immediately sent to Metz, in the region of the Moselle river. After our arrival, my wife and I were given 10-year residency permits. But because she doesn't speak French very well, I had to start looking for work on my own.

After being unemployed for a long period, I was hired to work for the local authorities for a year and a half doing maintenance work. I repaired public buildings, such as the school and the local administration department. 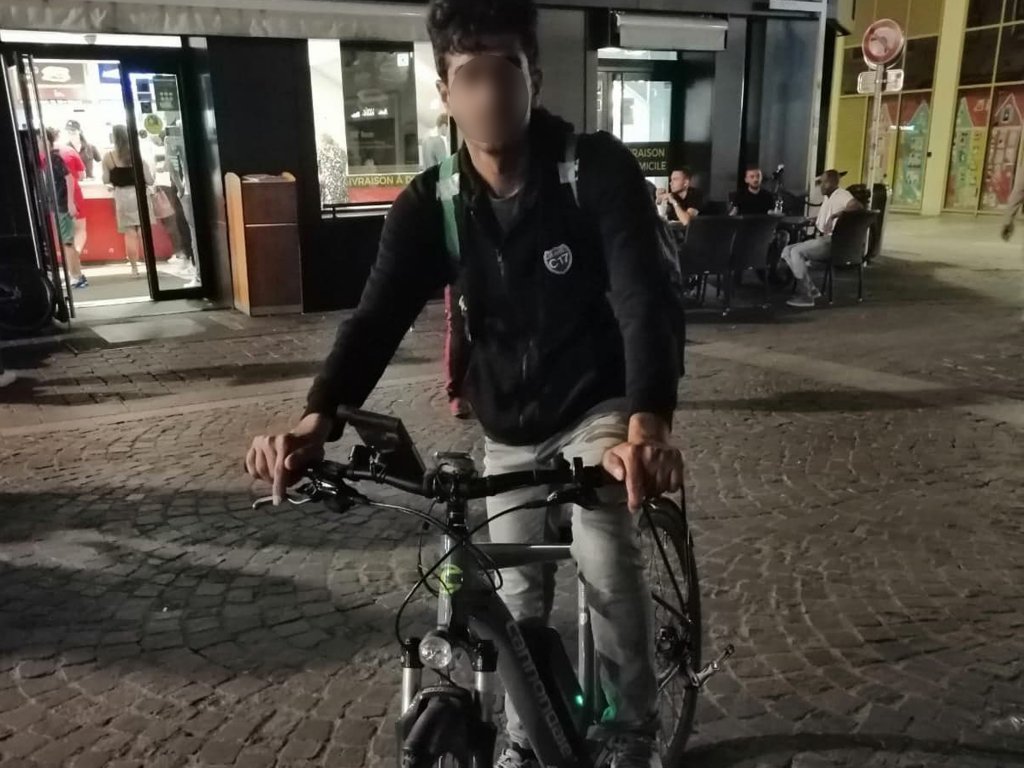 I stopped working there when my contract ended, and I became a bicycle courier for the food delivery platform Uber Eats in February, 2019. An Afghan friend, who's a courier himself and a former interpreter for the French Army, helped me get this job. When he told me what it was like to be self-employed, I was convinced right away that I wanted to control my own schedule to be able to take care of my two children, and to make myself available for meetings if I needed to.

After my application was accepted by Uber Eats, I bought myself an electric bicycle for €2,000. I had to take a loan to afford it, of course. But it's an indispensable investment: I didn't want to pedal all day on a normal bike. It would have been way too exhausting.

After getting the green light from the Chamber of Commerce in Moselle, I set up my micro company and became self-employed. I didn't really have a choice: This is how Uber Eats pay their couriers.

From day one, I've had to adapt to how the platform works: I start my day by going to the city center, where I'll sit down and wait for the orders to come through on my smartphone. After that, my phone starts pinging and I accept the orders by clicking on a button. Once I've accepted an order the restaurant address shows up automatically. After picking up the order from the restaurant, Uber Eats sends me the address of the client, and I deliver the food. After that, I head back to the center.

Once I've completed a delivery, Uber Eats sends me a message telling me how much they owe me. On average, I earn about €4.50 per delivery. But I only get paid at the end of the week, with the money being paid directly into my account on the platform.

I earn between €1,200 and €1,300 per month as a courier. One of the reasons why I earn so much is because I go much faster than a lot of the others thanks to my electric bike. I'm also lucky in the sense that I'm not sensitive to heat. In Afghanistan, I often worked outside. Even when I worked as an interpreter I would sometimes go and help my parents on their farm at the weekends. And so when the heatwave struck France this summer, it wasn't a problem for me: in contrast to many other couriers in Metz I could continue to make deliveries and so I made more money.

I also earn more in winter. This is because people go out less when it's cold and they order more through the delivery platforms. During this period, my wage increases a lot: by €200 to €500 more than in summer. But it gets very cold in winter too. Sometimes I get sore knees from having to pedal all the time.

In a way, my job is more of a workout than a real job.

It's really exhausting working outside and always being on the road. To make matters worse, Uber Eats recently expanded its delivery zone for Metz. Since then, we're sometimes asked to deliver up to five kilometers outside the city. On average, I bike between 25 and 30 kilometers a day, but sometimes I go up to 40 kilometers, especially on Sunday nights.

I won't be able to work under these conditions forever – I'm not paying into either a pension nor making myself eligible for any unemployment benefits. But at the same time, I have to provide for my family and so I've applied to become a courier also for Deliveroo, on top of my work at Uber Eats. But my application isn't moving forward at the moment because the competition is cut-throat. So I'm currently waiting for the platform to activate my account.

I'm trying to make sure I can keep things covered by applying for other jobs. I recently asked the employment agency to train me as a shop assistant, but in the long term I dream of working as an interpreter again — but here, in France."