'Burning up our future': How the climate crisis is triggering increasing displacement

Migration caused by natural disasters and violent conflict is on the rise: In the first half of 2019 alone, more than 10 million new people lost their homes due to extreme weather and political instability. Humanitarians and activists are warning of a "climate apartheid" and an "unprecedented" threat to human rights.

In Kelibia, a port town on Tunisia’s northeastern coast, fishing is a vital part of the local economy. Similar to many other fishing towns along the Tunisian Mediterranean coast, Kelibia’s some 50,000 residents rely heavily on fishery and its related industries. But as the pressures of the climate crisis decimate global fish stocks, the fishing trade in Tunisia – and many other parts of the world – has begun to dwindle.

In fact, 90 percent of the world’s fish stocks are now “fully exploited, overexploited or depleted,” according to the UN’s Food and Agriculture Organization (FAO). As a result, fishermen in Kelibia and around the world are being forced to stay out longer in deeper, rougher waters in order to get the same catch.

As socioeconomic pressures grow and increasingly threaten their livelihood, fishermen in Tunisia and elsewhere are turning to second jobs - or illicit sources of income, including smuggling goods and even people. After all, Kelibia is only a short sail away from Sicily (160 kilometers), Lampedusa (200 kilometers) and Malta (300 kilometers); all desired destinations for migrants trying to reach Europe via the central Mediterranean route.
A ride in a small fishing boat can net a smuggler up to 6,000 Tunisian dinars, roughly €1,850, a fisherman from Kelibia told The Guardian. It’s no surprise that Tunisia’s coastline is part of a people-smuggling route that extends deep into the Sahel and beyond. But in another Tunisian fishing town near the Libyan border, fishermen have become an "integral part of the rescue mission to aid sunken migrant boats they see while out at work," according to the same Guardian article. 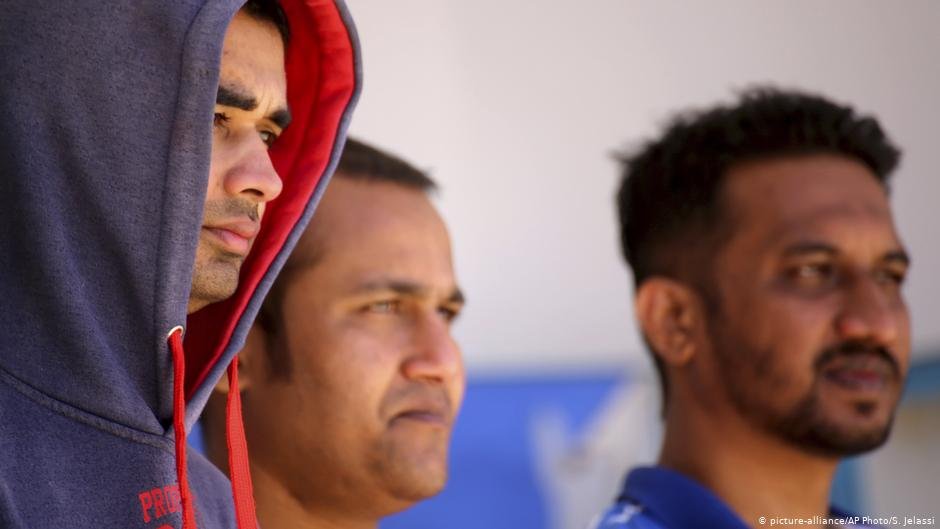 Tunisian fishermen smuggling migrants to Europe in order to make up for their climate crisis-hit, shrinking income is just one example of how environmental degradation and displacement are interlinked. Moreover, it’s a glimpse of a future where presumably millions will be forced to migrate to avoid changing and worsening climatic conditions, such as rising sea levels and more extreme weather conditions like droughts and hurricanes.

The recent devastation of parts of the Bahamas by Hurricane Dorian, which left dozens of people dead, thousands missing and an estimated 76,000 homeless, is the latest indicator that persons displaced in the context of disasters and climate change is a growing global phenomenon.

Other examples from 2019 include monsoon flooding in three South Asian states that killed dozens of people and forced more than a million from their homes; Cyclone Fani, which triggered millions of new displacements in the form of life-saving evacuations in India and Bangladesh; Cyclone Idai, which wreaked havoc across Mozambique, Malawi, Zimbabwe and Madagascar, where many are still displaced today; and similarly devastating floods across Ethiopia, the Philippines, Bolivia and Iran, where the worst flooding in 100 years affected two thirds of the country.
The spike in natural disasters is linked to displacement. According to a new report by the Internal Displacement Monitoring Centre (IDMC), more than 10 million lost their homes and became internally displaced persons (IDPs) between January and June 2019.

Our latest figures reveal that there were about 10.8M new displacements worldwide between January and June 2019, 7M triggered by disasters and 3.8M by conflict and violence. Find out more in our latest report: https://t.co/K1cF4fQL5i pic.twitter.com/5JTrUDPn9Q

'Becoming the norm'
Of the total recorded, a record seven million new displacements were associated with natural disasters, primarily storms and floods. According to the report, this means that mass displacement by extreme weather events is becoming the norm.

"The internally displaced can no longer be internationally disregarded,” said Alexandra Bilak, IDMC’s director. “We must support national governments in their efforts to protect and assist displaced communities, to build peace, and to mobilise more investments towards sustainable development and climate change adaptation. Only then will we be able to limit the damaging effects that internal displacement has on the people and communities affected, and finally see a reversal of these trends."

Based on past trends & the fact that the majority of weather-related hazards occur in the latter part of the year, @IDMC_Geneva estimates that the # of new #displacements by disasters will more than triple by end of the year to around 22 M. More here: https://t.co/VUNhrfRXrm pic.twitter.com/15mfTZMqj9

Given the seasonal nature of this type of displacement and based on a decade of historical data, IDMC, established in 1998, estimates some 22 million new displacements by the end of the year - a number among the highest recorded. The UN refugee agency UNHCR refers to the consequences of climate change as "extremely serious,” including for refugees and other people of concern. In its Global Compact on Refugees, adopted by the UN General Assembly in December 2018, the UN recognized that "climate, environmental degradation and natural disasters increasingly interact with the drivers of refugee movements."

Since IDMC began collecting data in 2008, about 265 million people have been uprooted by natural disasters. That’s more than three times as many as those forced from their homes by conflicts and violence.

In addition to the seven million people displaced by disaster-related events, 3.8 million new displacements were triggered by conflict and violence, primarily across Africa and the Middle East. According to the IDMC report, the majority happened against a backdrop of collapsing peace deals and ceasefires in Syria, Yemen, Afghanistan and Libya, with the capital Tripoli experiencing the worst episode of violence since the start of the civil war in Libya in 2014.

Ongoing instability in Ethiopia, Nigeria and the Democratic Republic of Congo also drove large waves of new displacement this year, the report said."These figures are troublingly high for this point in the year," IDMC’s director Bilak said. “They show that the roots of conflict and inequality are not being addressed, and that displacement is creating cyclical patterns of crisis and vulnerability." 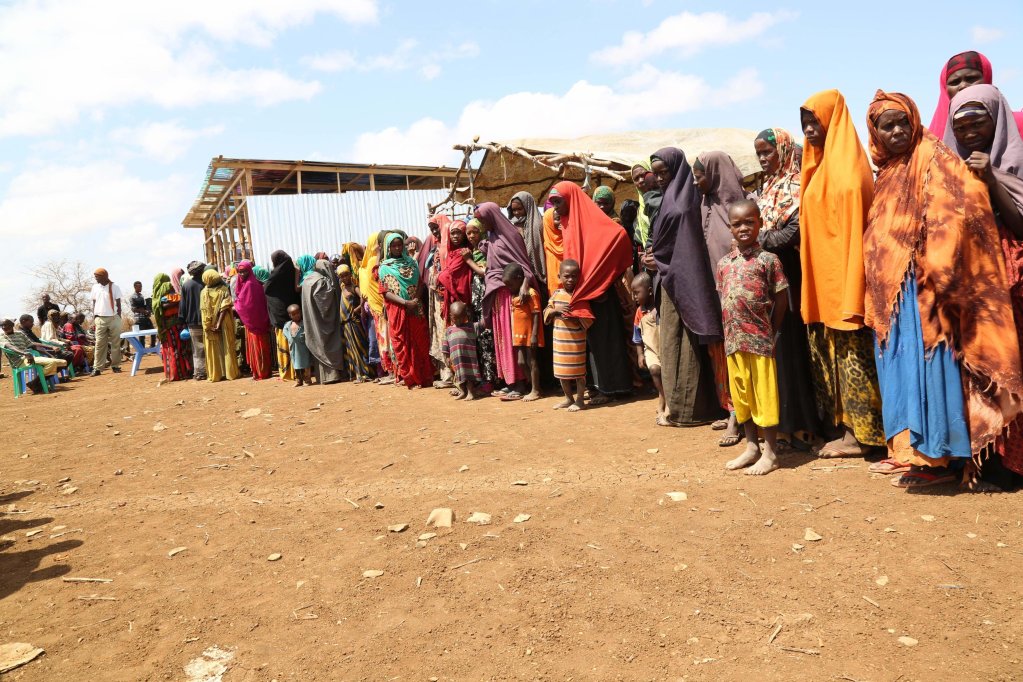 Although some 60 percent of the estimated 70.8 million forcibly displaced people worldwide are IDPs, migration induced by the climate crisis and conflict doesn’t stop at the border. In countries and regions ranging from South Sudan to Syria, central America and Haiti, to the Lake Chad basin and Horn of Africa, people fled their homes and sought refuge in another country because of climate change. 1.1 million Somalis, for instance, fled to Kenya and Ethiopia from the impending civil war after the 1991 collapse of the government. The political instability was compounded by drought-related famine, itself linked to armed conflict and violence.

Such cross-border movements in situations where conflict or violence has interacted with disaster or adverse effects of climate change is an area known as "nexus dynamics." In the words of a 2018 UNHCR report on the subject, Somalia can be characterized as a “situation in which preexisting conflict, and responses related to it, exacerbated the impacts of disaster and adverse effects of climate change."

"Climate change is real in Somaliland ... and it is becoming a disaster"

Importantly, nexus dynamics is an example of a "situation where the refugee criteria of the 1951 Refugee Convention or broader refugee criteria of regional refugee law frameworks may apply," according to UNHCR. This matters because “climate migrants” - or environmental migrants as they are sometimes called - are not legally considered refugees according to international law. To date, there is no globally accepted or legally binding definition of a “climate migrant,” and the term "climate refugee" meanwhile is being discouraged from being used and somewhat regarded as a misnomer - even by UN bodies.

Several humanitarians and activists have recently voiced their concern about the nexus of the climate crisis and migration. On Monday, United Nations human rights chief Michelle Bachelet warned that climate change has become an unprecedented threat to human rights worldwide. "We are burning up our future - literally," Bachelet said. "The world has never seen a threat to human rights of this scope. This is not a situation where any country, any institution, any policymaker can stand on the sidelines."
Bachelet also voiced concern for a number of policies carried out by European countries which she feels express a “lethal disregard” for migrants. Actions by some European countries to criminalize NGOs, she said, have had “deadly consequences for adults and children seeking safety."

Similary, a report from June by UN Special Rapporteur on poverty and human rights, Philip Alston, warned of a future “climate apartheid.” In this scenario, the global poor will suffer the worst consequences of climate breakdown while the rich buy their way to relative security. “Human rights might not survive the coming upheaval,” the report concludes gloomily. In an opinion piece for The Guardian from early September, Sea-Watch captain Carola Rackete echoed Alston’s warning. “Climate apartheid,” Rackete said, would “only lead to more tragedies in the Mediterranean” and elsewhere.

In the next few decades, millions will be forced to migrate to avoid ever-changing, ever-worsening environmental conditions,” the 31-year-old German said. “So far most of them are migrating internally, from rural to urban areas, or are moving to neighboring countries. Only a handful travel longer distances. They are then stranded in front of the walls of countries that are often in part responsible for the conditions – both environmental and political – that they are fleeing."

This wasn’t the first time Rackete spoke out about the climate crisis and migration since her arrest in June. In mid-July, for instance, Rackete called on Europe to take in hundreds of thousands of migrants stranded in Libya, arguing one should no longer distinguish between different migrant groups. Her comments, which were met with approval and criticism alike, sparked a debate on so-called 'climate migrants.'

Environmental migrants on the rise

Although it's not clear how many people exactly will be uprooted by the climate crisis, the number of 'climate migrants' is predicted to increase. "Climate change is one of those factors [causing immigration to Europe to increase]," Mark Akkerman of Dutch anti-arms trade organization Stop Wapenhandel recently told DW. "I think the EU definitely does take that into account even if they don't say it out loud at the moment."

Researchers at Columbia University, meanwhile, have shown that between 2000 and 2014, temperatures deviating from the norm in countries that migrants come from correlated with increased asylum applications in Europe. However, Dina Ionesco, head of the Migration, Environment and Climate Change (MECC) division at UN Migration Agency IOM, said that climate-related displacement is mainly internal.

"Isolating environment/climatic reasons is difficult, in particular from humanitarian, political, social, conflict or economic ones," she wrote in a blog post. "It can sometimes be an impossible task and may lead to long and unrealistic legal procedures." Moreover, hundreds of millions of people who live near the world's oceans could also be under threat if sea levels continue to rise.
With material from AP