In war-torn Libya, a major transit point for migrants seeking to cross the Mediterranean to Europe, the situation for the close to 5,000 refugees and migrants stuck in detention centers is still hostile. On Thursday September 12, 98 refugees were taken to Italy, the latest transfer in a larger effort to evacuate the north African country's overcrowded and unsafe facilities.

Italy on Thursday September 12 took in 98 vulnerable refugees from Libya, UN refugee agency UNHCR said. The evacuation was part of urgent efforts to relocate people as conflict continues to rage in Libya. Many of the evacuees from Eritrea, Ethiopia, Somalia and Sudan had spent long periods in Libyan detention. Among the group were 52 unaccompanied children.

UNHCR thanked Italy, but pointed out that some 4,700 refugees and migrants are still detained in Libya, which is a major transit point for migrants seeking to cross the Mediterranean to Europe. "We hope that other countries will heed this example and provide similar, life-saving humanitarian evacuations," UNHCR said in an online statement.

A group of 98 vulnerable refugees have just been evacuated out of Libya to Italy, including 52 unaccompanied children. https://t.co/YF9SMUJStS

Since January, UNHCR has helped evacuate 1,474 refugees from Libya. Niger has taken in 710 people, Italy has accepted a total of 393, while 371 were allowed to permanently resettle in other European countries and in Canada.

Earlier this week, UNHCR said hundreds more are to be evacuated to Rwanda, with a first group of 500 refugees and asylum seekers expected to be transferred "in the coming weeks."

On July 2, an airstrike on the Tajoura refugee camp on the outskirts of the capital Tripoli, carried out by the airforce of eastern Libyan strongman Khalifa Haftar, killed at least 53 people and injured a further 130. The incident underscored the vulnerability of the mainly African migrants there.

Two weeks later, the Tajoura detention center was filling with migrants again including those intercepted by Libya's coast guard — despite calls for the compound located close to the front-lines of the country's civil war to be emptied.

Around the same time, work resumed at a nearby weapons workshop, where people reported they had been forced to clean and repair weapons used in the civil war between the UN-backed official government and forces led by Haftar in the east of the country. 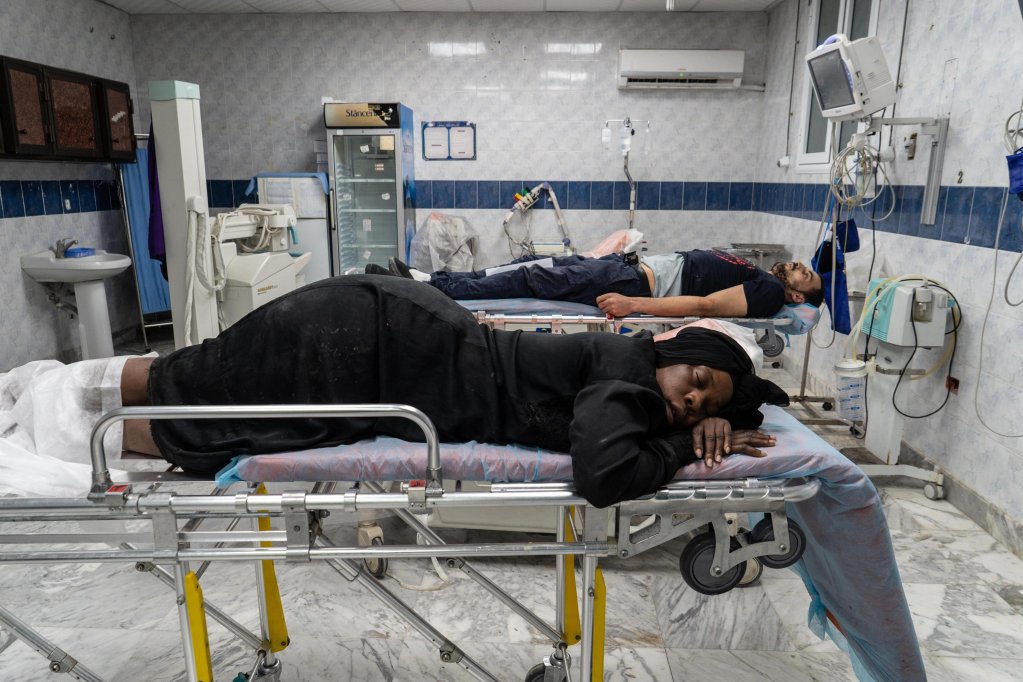 Since 2011, when the former leader Muammar Gaddafi was toppled in a NATO-backed uprising, Libya has become the main conduit for Africans fleeing war and poverty trying to reach Europe. According to UN agencies, detainees are held in overcrowded, inhumane and insecure conditions. What's more, the ongoing fighting has created a hostile environment for migrants.

In mid-July, aid organizations including Doctors Without Borders (MSF) and UNHCR sharpened their tone against hunger, forced labor and torture of migrants and refugees in Libya's detention centers.

The NGOs called on the European Union to terminate their cooperation with Libya’s controversial coast guard, which intercepted more than 2,300 people on boats in the first half of this year. In 2017, it prevented some 20,000 migrants from reaching Europe's shores and returned them to Libya.

On July 10, UNHCR relocated 103 refugees who remained in the Tajoura detention center and moved them to the Gathering and Departure Facility (GDF) in Tripoli, which is operated by UNHCR and partners. This followed earlier attempts to relocate the most vulnerable refugees in Tajoura to the GDF, the agency said in a statement.

A day earlier, refugees in Tajoura were given the choice by the authorities to freely leave the detention center. A group of some 300 refugees and migrants who decided to leave Tajoura detention center reached the GDF by foot.

Set up in December 2018 to serve as a transit center for up to 700 formerly detained refugees about to be evacuated, the facility is currently "severely overcrowded." After the evacuation to Italy, it now holds 900 individuals at present, according to UNHCR.

The facility was originally intended for those who have been identified as "most vulnerable" and for whom a "solution outside Libya has already been found," UNHCR said in a statement from last week.

UNHCR statement on the situation in the Gathering and Departure Facility in Tripoli pic.twitter.com/zp41uT5I01

On top of the some 400 migrants UNHCR relocated from the Tajoura detention center, many others entered the facility without "UNHCR’s identification," according to UNHCR.

"The infrastructure and services at the GDF are stretched thin, with deteriorating living conditions that may lead to an unsustainable situation," the statement read.

UNHCR said individuals who arrived spontaneously have been offered support "in the urban context," meaning they are allowed to "move freely" and receive a "support package." Paula Esteban, UNHCR spokesperson in Libya includes medical assistance, cash, "core relief items" such as household items, blankets and toothbrushes, psychosocial support, resettlement for the most vulnerable and other activities, including language courses and vocational training.

These services are provided at a "community day centre," run by UNHCR and partners, which receives between 250 and 300 visitors per day, Esteban told InfoMigrants. Moreover, an "individual protection assessment" would allow some individuals to be identified for "resettlement, return to first country of asylum or other legal pathways."

An individual who reached out to InfoMigrants in private messages on Twitter this week claimed to be one of the 400 migrants who survived the airstrike on the Tajoura detention center in July and was subsequently taken to UNHCR's Gathering and Departure Facility.

The individual said they were Sudanese and survived the Darfur genocide, accused UNHCR staff of threatening them to leave the GDF and "go to Tripoli." The individual further told InfoMigrants about mental health problems and the fear of being pushed out to Tripoli, where "human trafficking and and criminal gangs" await.

According to UNHCR, persons who are "relocated to the urban community" will be able to access accommodation with cash assistance. Moreover, "shelter options will be sought for the most vulnerable."

50,000 refugees and asylum seekers are registered with UNHCR who are currently living in said "urban community" and are not detained. 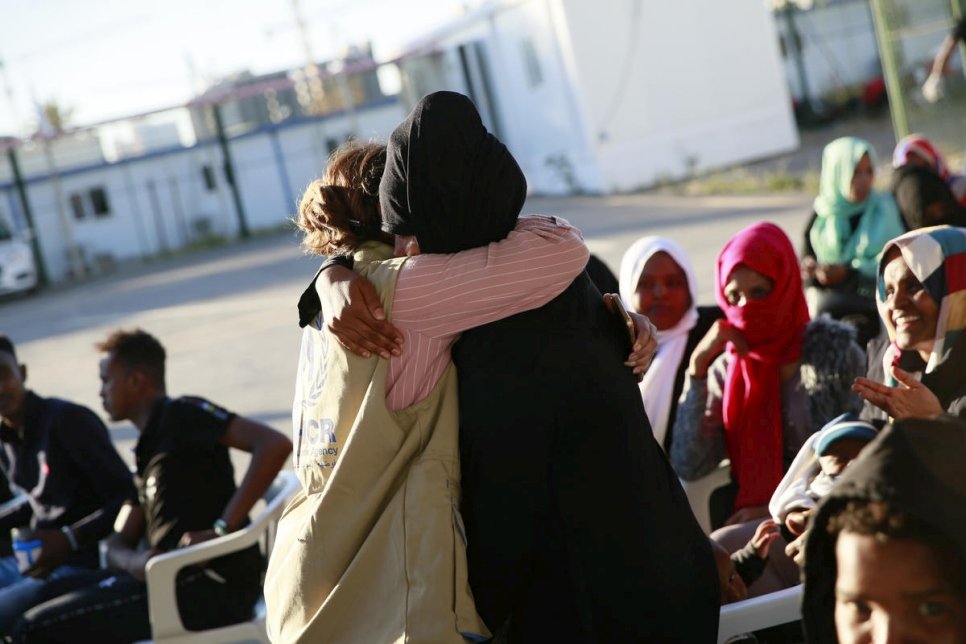 The agency and its partners are also "increasing its teams to ensure the relocation is undertaken in a smooth and orderly manner and all individuals receive support," the statement read further.

The individual who contacted InfoMigrants on Twitter claimed those migrants who are "relocated" only receive 450 dinars (€285), which "can't provide food [or] accommodation for someone." Responding to this criticism, UNHCR's Esteban stressed it's an initial cash assistance meant to help people cover accommodation costs.

The cash program, Esteban said, has two components: emergency cash and regular cash assistance, which is allocated monthly. Which type of assistance a person is entitled depends on each person’s vulnerability, she said. A single mother, for example, may need cash every month, while "someone who is working in Libya and is well establishes may be in need of emergency cash for a particular incident."

While UNHCR admitted the solution for people at the GDF, which UNHCR said is under the jurisdiction of Libya's interior ministry, "may not meet their expectations," it insisted it is the "only alternative with the current available resources."

"UNHCR operates in a highly complex and challenging context in Libya," according to the statement. It also said more slots for resettlement, evacuations and humanitarian corridors were needed.

Heinrich Bedford-Strohm, head of the Protestant Church in Germany (EKD), this week called returning migrants to Libya, where they would wind up in Libyan camps, irresponsible. The conditions there are "appalling and in some cases, inhumane," said Christophe Hey of MSF.

Germany's Protestant Church this week announced it will send a ship to the Mediterranean to rescue migrants attempting to make the crossing into Europe.

Echoing these statements, UN High Commissioner for Human Rights Michelle Bachelet, also this week, criticized migrants’ interception and return by Libya’s coast guard. Their rights and, potentially, their lives are "seriously threatened" in Libya, she said.

"I am concerned by this lethal disregard for desperate people," she added.