French police have evacuated at least 800 migrants from a makeshift tent camp that had sprung up outside a gym near the northern port city of Dunkirk last spring. A court had ruled that the camp in Grande-Synthe was becoming a health and security hazard. Many in the area fear, however, that there will be more migrant tent camps in the future.

The mayor of Grande-Synthe had opened the gym to migrants last December to keep families out of the cold, and was originally planning to close it again with the return of the warmer weather of the past summer months. But in addition to the roughly 100 people making use of the gym, hundreds of others, mainly young Kurdish men from northern Iraq, soon began pitching tents around the site, making the situation unmanageable.

Earlier this month, the mayor had to obtain a court order to shut down the camp based on complaints from local authorities and residents not only about health and safety concerns but also citing violence as well as the presence of human trafficking rings in the area.

The area around Grande-Synthe has traditionally drawn many Iraqi Kurdish migrants, and makeshift camps have repeatedly had to be cleared in the area in recent years. French authorities in the north of the country remain alert about migrant camps as the government wants to avoid a repeat of the "jungle" camp of Calais — a sprawling tent city near the northern port city that at one point held more than 10,000 people.

Jenni Whitaker, a volunteer with Human Rights Observers in the Calais/Dunkirk region meanwhile tweeted a picture, juxtaposing the difference in the situation on the ground before and after the removal of the migrants.

A before and after of the eviction of the refugee camp in Grande-Synthe known as the gym, the living space of some 1000 people pic.twitter.com/L81ddcTySi

A spokesman for France's Nord region said the removed migrants included at least 58 unaccompanied minors. He added that all the migrants will now be taken to temporary shelters and allowed to file asylum applications. The evacuation was reportedly handled in a largely orderly manner.

Nevertheless, local authorities expect such improvised camps to return to the region, as migrants are drawn to the north of France in hopes of reaching Britain by crossing the English Channel — the world's busiest shipping lane — either by boat, as has more recently been the case, or as clandestine cargo on trucks en route to the UK via the Channel Tunnel or by ferry crossings. 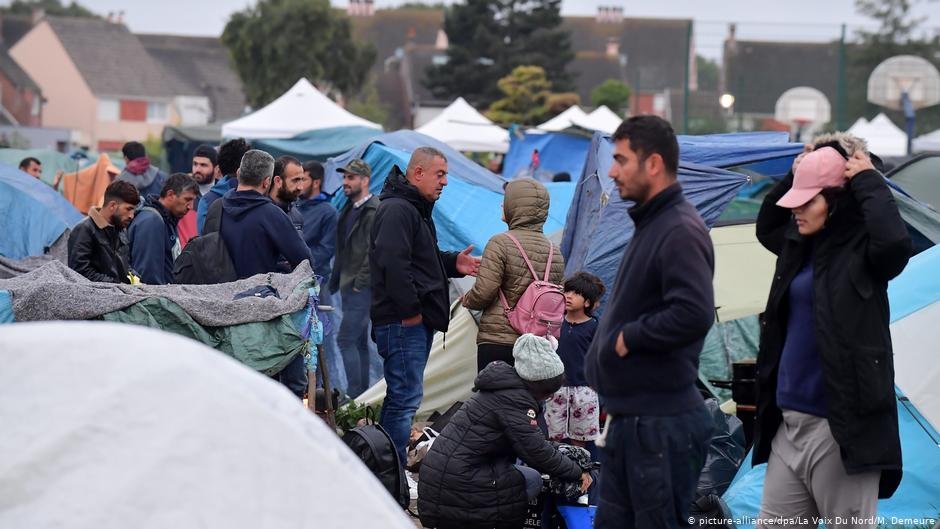 Activist groups have repeatedly warned that such mass evacuations don't tend to deter migrants from coming to the area. Claire Millot, secretary general of the Salam migrant aid group, which has been working at the camp site in Grande-Synthe, told Agence France-Presse (AFP) that "nobody wants to see people living like this. "But putting them on buses to bring them to shelters they don't want to go to, it doesn't make any sense. They're going to come back," she said.

France's human rights ombudsman Jacques Toubon, has meanwhile accused authorities of "trying to make (migrants) invisible" by regularly tearing down their camps without providing them with viable alternatives.

Martina Villa, Communications executive at Doctors of the World, accompanied some of the evacuees, saying that 24 hours later, they had returned to the same spot.

Just met a group of young boys seeking asylum. They were brought to Lille after the eviction at grande synthe yesterday. They took a bus back at night to #Dunkerque. Result of the eviction? They are in the same place as before, but now without food, water, shelter or blankets pic.twitter.com/FKUKZEvhz5