The far-right group Britain First has launched a campaign called "Operation White Cliffs" to patrol Britain's beaches in a bid to stop migrants attempting to land on UK shores after crossing the Channel in small boats. Local anti-racism campaigners have organized counter demonstrations and British authorities have meanwhile advised all citizens to avoid taking direct action and to leave that work to the authorities.

A Britain First flag combined with a Union Jack waves from the top of Britain's Kent cliffs in a video, as a tattooed activist with his back to the camera focuses his binoculars out to an empty sea. Britain First leader, Paul Golding, wearing a Britain First rosette pinned to his grey suit, speaks over a rousing soundtrack and a lot of wind noise:

"I’m here on the beaches just west of Dover. This is where a lot of the migrant crossings have been landing," he explains whilst standing on a grey tarmac path in front of some grass covered chalky cliffs.

The video is intercut with news footage of migrants arriving in canoes, small inflatable dinghies and other craft. Golding makes the point that "women and children are almost absent" in the photos of the crossings that have appeared in the media. "What you have here are men in their twenties, thirties and forties, mainly from Africa and the Middle East, traveling half way around the world to get to soft-touch Britain." 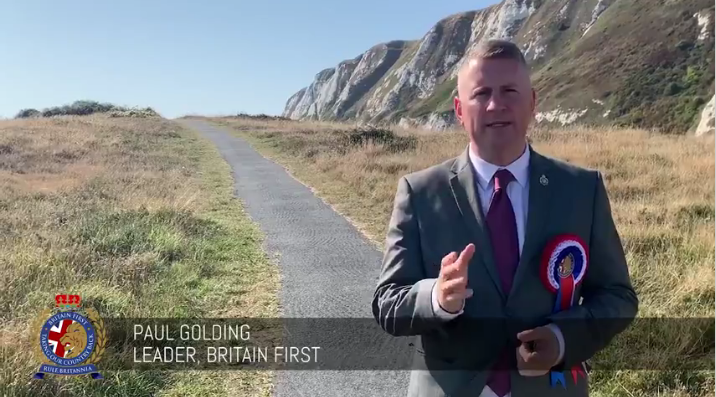 Golding calls the patrols his group have organized "patriot migrant patrols." He says they are there to "stop this insidious small-scale invasion of our country;" and claims to do anything to "defend our country from whatever invasion threatens it."

All quiet on the sea front

In the video, Golding explains that his group has set up three separate stations along the coast with teams of activists stationed at each one. Later in the video he talks about how the group might use drones which can fly a mile out to sea to take pictures of the migrants before they land. 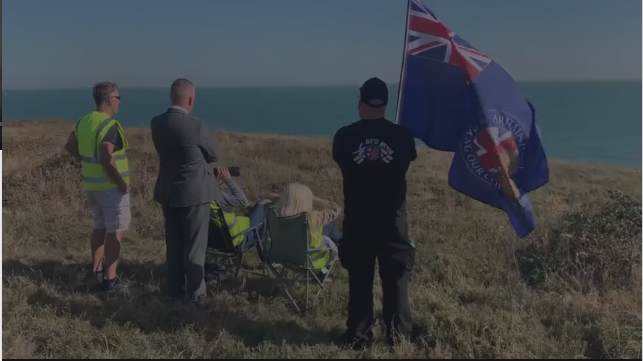 On the windy cliff-top, however, there is nothing to be seen at sea except the sun glistening on calm blue waters. Golding says his teams have been "looking out to sea for hours now trying to spot these migrant crossings." The only other life on the cliffs appears to be a few sheep but Golding says "over the next couple of weeks, we're going to be escalating these patrols in a big big way."

On its website, Britain First claims it is "committed to the maintenance of British national sovereignty, independence and freedom." They say they want to "preserve British cultural heritage, traditions, customs and values." They also oppose "the increasing colonization of our homeland through uncontrolled, mass immigration." 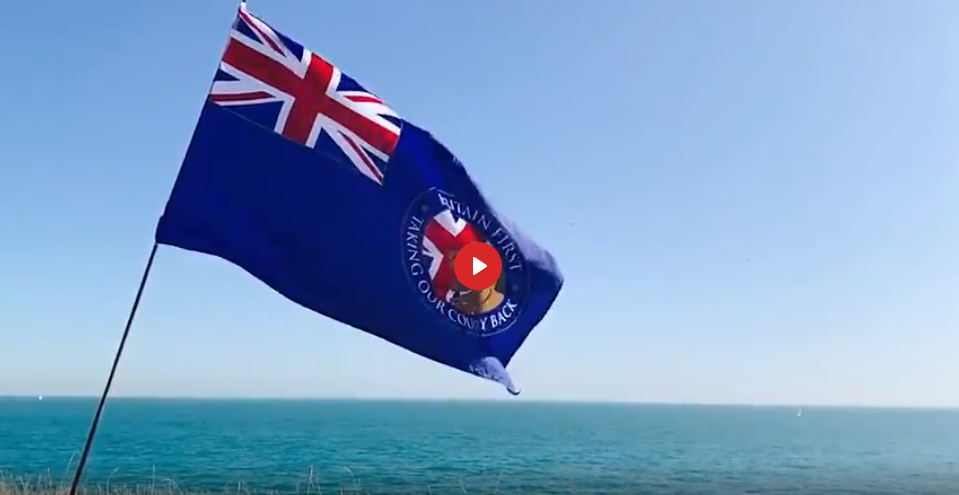 In another video, Golding can be seen in Calais a few years ago confronting two Eritrean migrants and telling them not to come to Britain or any other Commonwealth country (like Canada) because "we are full." He offers to pay for the two men to go back to Eritrea or back to Africa and asks them why they did not stay on their own continent.

When the men tell him they had no choice but to flee, Golding and an unseen supporter tell them that they should not attempt to claim asylum in the UK and should either go back or stay in France and seek asylum there.

Not everyone in Kent agrees with Golding however. The Kent Anti-Racism Network (KentARN) organized a protest on Kent beaches on Sunday September 22 against the Britain First patrols. On their social media pages, 39 of their supporters are seen standing in front of a message in the sand: Refugees Welcome.

One of the founding members of KentARN, Bridget Chapman, posted her speech on Facebook too.

In it, she said that the "out-and-out hatred peddled by these uniformed muppets doesn't represent our amazing Kent community." In answer to those who say that the far-right group should just be ignored, Chapman underlines that "poison spreads. Even if they are a tiny number of people, we cannot allow them to infect anyone else."

Chapman, like Golding, refers to Kent's history as part of her reasoning. But instead of talking about Kent's history repelling invaders like Golding does, Chapman talks about the region's "proud history of welcoming visitors, migrants and asylum seekers." She notes the French Huguenots fled to the UK in the 16th century, and "in World War I, 250,000 refugees came to this country from Belgium."

Addressing some of the far-right rhetoric which labels the Channel Crossings a "crisis" and a "swarm," Chapman says that since Christmas 2018 "900 asylum seekers have made that journey here."

According to local newspaper, Kent Online, another pro-migrant group, Care4Calais, said "we are shocked and concerned to learn of this unsettling development on our Kent coastline" while a local organization called "Seeking Sanctuary" said that the Britain First initiative was "unhelpful and unnecessary and will only inflame tensions."

The group, which is run by Ben and Marie-Claude Bano, was set up to "promote awareness of migrants near our shores," as well as providing "humanitarian assistance to exiles, especially those stranded in northwest France."

In the same newspaper, the UK Home Office and Kent Police are quoted as saying that "officers will respond to reports along the coast in the same manner they respond to incidents inland, by assigning the most appropriate patrol depending on the circumstances reported."

The Press Alliance news agency meanwhile said that the Home Office had issued a warning that people should not take any "direct action" against migrants. 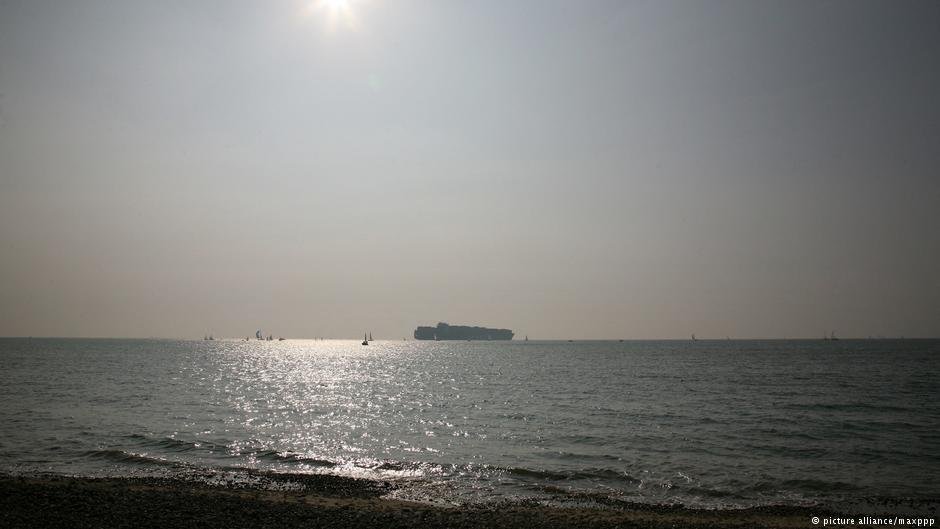 However, the police warning may fall on dead ears: In another video on Britain First's website, one of their activists attempts to film the arrival of a number of migrants accompanied by British police. The police tell him to stand back as he protests that the police shouldn't be granting them asylum and that they should rather be "put on a boat and sent straight back."

In the introduction to this video, Golding is heard saying that the migrants were "met by left-wing activists, who give them forms to tell them how to claim [welfare] benefits."

Golding was sentenced to 18 weeks in jail in 2018 for religiously aggravated harassment against Muslims. His group has been banned from Twitter and Facebook and has also been issued a fine from the electoral commission in the UK (which monitors the activity of all political parties operating in the UK) for a series of offences.

The founding members of Britain First, including Golding himself, were formerly active with the right-wing British National Party (BNP).