Cycling World Championships: Nazir Jaser rides against the shadows of the past

In 2015, Syria's national cycling team fled the war in their country. Nazer Jasir even sold his racing bike in order to fund his escape. Now he's at the Road World Championships in England – and ready to make his mark.

Nazir Jaser sighs: "Actually this is not an even competition. I think I'm the only amateur here who works full time and cycles on the side."

Shortly before his biggest event of the year, a feeling resembling doubt creeps up on him. As a trainee and amateur rider, can he stand up to the professional elite? Of course, he knows all too well that he won't be able to. In the individual time trial of the World Championship in Harrogate, England, he'll be up against big names in cycling such as Vuelta winner Primoz Roglic, defending champion Rohan Dennis, former Tour de France winner Geraint Thomas and four-time world champion Tony Martin.

A total of 54 kilometers (33.6 miles) of undulating terrain and a difference of 648 meters (223 feet) in altitude between the towns of Northallerton and Harrogate await those beginning the World Championships in a race against the clock. The challenging Yorkshire course is expected to lead tolonger time intervals between the competitors. Jaser tries not to be intimidated by all of this and, since arriving last week, has prepared himself meticulously. He's already looked at the track several times, on bike and in a car, acknowledging that understanding the course will be crucial in the time trial.

This is to be his third World Championships after 2013 and 2017. In the first effort, Jaser finished last, at least partly because he was only allowed to use a normal racing bike after his time trial bike was judged not to comply with the rules of the International Cycling Union (UCI).

"At the 2017 World Championships in Norway, I already left 10 riders behind. Here in England I want to work my way a little further forward," he says in an interview with DW. The fact that he can even start here in the jersey of the Syrian national team is a happier ending than could have been expected.

Jaser grew up in Aleppo and was just 10 years old when his father died. At the age of 12 he left school and trained as a tailor to earn money until the war reached his hometown. Jaser then fled to Damascus, but couldn't stay there for long. His friend and teammate Omar Hasanin was arrested in 2014, allegedly for trading on the black market. In prison, Hasanin - part of Syria's Olympic team in 2012 - was so badly beaten and abused that he can no longer walk, let alone cycle, according to his teammates. Almost all of the Syrian national team riders then decided to flee.

Meanwhile, at the UCI Road World Championships in Yorkshire 😳#Yorkshire2019

"We drove by car, were on ships and boats and walked," says Jaser, who left his homeland as reigning national champion, of the escape. "We sold our bicycles in order to be able to afford the trip. The escape was expensive and not everything was always official. Money was needed. The inflatable boat from Turkey to the next Greek island cost $1,500 (€1,360) alone. Leaving my bike behind hurt. But there was no alternative."

After a long journey across the Mediterranean Sea and through several European countries he reached his destination, Berlin, at the end of 2015. There, the 30-year-old has built a new life for himself.

Nothing but a rucksack

He found an apartment, began training as a sports and fitness salesman and is now hoping for a position at the local sports federation in Berlin. A cycling club in the capital has given him the opportunity to train both on the track and on roads along with other Syrian refugees. Jaser is trying to get on with his life, but sometimes he is reminded of what he left behind, like his home and his friends. He was only able to carry a rucksack with him when he traveled to Germany.

"Certificates, medals, trophies. I had to leave behind everything I won in cycling. The war turned my life upside down," he says. "Our apartment no longer exists, everything is gone.”

In Germany, Jaser is hoping to build a future and he hopes that his family will one day be able to join him her. His spoken German is extremely good for someone who has only been in the country for four years and he has a clear idea about how he wants to shape the rest of his live. Nazir Jaser has truly arrived in Germany.

His team's sporting director confirms this. Christoph Reckers met Jaser in 2018, when he and a few of his compatriots joined the amateur cycling team Paintrain. The Syrian quickly fit into the group and soon found himself wearing the yellow jersey as the leader in the German Cycling Cup racing series.

"He's a quiet guy, not a loudmouth," Reckers says of his rider. "He has a lot of experience in cycling and knows what he wants, but he lets others do the talking. A total of five Syrian refugees ride for Recker's team, which aims to bringing people closer together through sport.

"We learn an enormous amount from each other, also culturally,” he says.

Now that the Syrians are on board, the team go for their prerace meals to establishments that offer halal food. 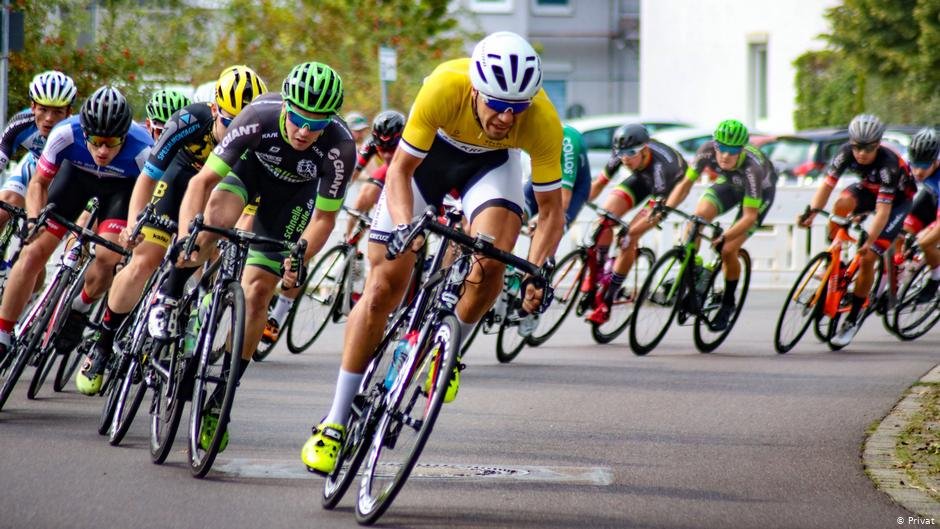 Syrian refugees at the World Championships

Jaser is just one of many Syrian athletes who fled the war and now live in exile. He says that the conditions for athletes back home are still bad – he was only able to train on one road, back and forth, and little has changed since he left.

"Cyclists in Syria also train hard, but they can't enter any races, so of course they aren’t at the level of performance you need to have a chance at being competitive."

This at least part of the reason that each of the three Syrians who've made it to the UCI Road World Championships in England (two in the elite category, one in the under-23s) now lives abroad after having fled the war.

Nazir Jaser is planning to give the road race on Sunday a miss due to the length of the course.

"The World Championship race is 284 kilometers (176.5 miles). I work eight and a half hours a day, so I don’t have enough time to train enough. This year I’ve only competed in one race over 150 kilometers. To do more than that I’d need to improve my performance and this of course takes time."

Still, Jaser plans to stay on to watch the event – hopefully after having put in a strong performance in the individual time trial. For Syria, his compatriots and for himself.

Syrian cyclist Nazir Jaser on his journey to Berlin: "I know how to swim. I knew I would make it. But there were women and little children in the boat. It was terrifying.” https://t.co/BT1245900X pic.twitter.com/IcIg3BPav8