The recent death of a 15-year-old unaccompanied minor in Moria has once again highlighted the plight of young refugees in Greece. As refugee numbers swell, those minors are becoming increasingly vulnerable.

Firuzeh* left Iran in 2012 when she was 8 years old, long before the current refugee crisis. After a long journey that took her to Turkey, Lesbos, the region of the Peloponnese and Athens, and after a period of homelessness, she arrived in Thessaloniki where she still lives. Her first impression of Greece is still vivid.

"I was surprised to see women in public without their veil; it was the first time that I saw that. I was also very surprised by the graffiti on the walls because this is not allowed in Iran," she says.

Even though Greece has always had refugee flows, the current infrastructure to accommodate them wasn't created until after 2015. Yet there were shelters for children like Firuzeh. The House of Arsis where Firuzeh still lives is one of them. Since it opened in 2007 as an emergency shelter on the outskirts of Thessaloniki, it has housed 317 children, Greek and foreign refugees, who were victims of abuse or neglect. It has a total capacity of 20 children and three emergency spots open at all times.

Firuzeh has been living there for several years and for her it's home. It's the place where she comes back after her hip-hop dance classes and where she feels safe.

"I clearly remember the day I left Iran. We were expecting a couple from Afghanistan who were planning to come to Europe: Fahima* and her partner whose name I can't remember. My dad suggested to go with them and my mum agreed. The guy left by plane to the Netherlands, and Fahima and I left as refugees."

After a while she started first grade primary school, where authorities registered her as a 5-year-old.

"I had a tutor who taught me the Greek alphabet so I picked up the language fast. My favorite class is history because you can learn from past mistakes and you will be able to avoid them in the future."

Yet shelters for minors, including refugees, that are funded by the Greek state, such as the House of Arsis, are currently at risk due to a lack of funding.

"Everything is interconnected in this country; from a political decision that will restrict people's access to health care to a school director's decision on whether they will treat a student as a refugee or as a child. After all those years of a crisis and even when there was enough funding, things don't work as they should. There are not enough shelters; there is nothing for those people," says Marianna Kolovou, a social worker and coordinator at the House of Arsis.

Firuzeh arrived through the most common migratory route in the Mediterranean, one that many minors still use along with the land route at the Evros River. Those who arrive through Evros end up in the camp of Fylakio which has a safe zone for minors. The lack of accommodation and shelters, however, makes living conditions for children even more dire. On August 31, the total number of registered unaccompanied minors in the country was 4,393. The capacity of the country's structures for children is 1,903.

Due to the lack of facilities, unaccompanied minors end up in protective custody either in prisons or hospitals for longer periods than actually laid out in Greek law. In June, the European Court of Human Rights ruled that Greece had subjected five unaccompanied migrant minors to inhuman and degrading treatment, and violated their right to liberty and security by placing them in police stations under "protective custody." 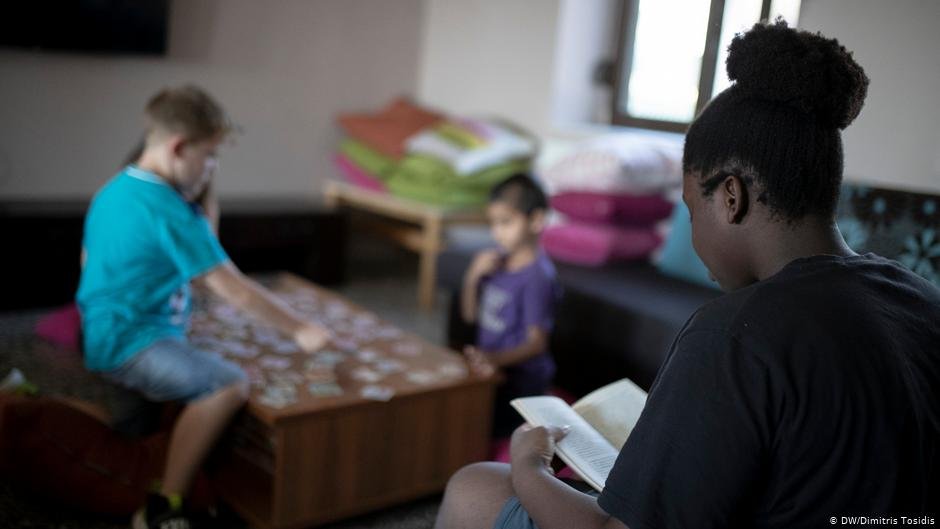 Ali* from Morocco arrived in Greece via Libya. Although a minor, he told the authorities that he was accompanied by a relative and managed to avoid protective custody. But he ended up homeless in Thessaloniki.

"There were times I slept in a refugee camp near Thessaloniki. Other times I stayed in train wagons in the train station. That's when I met a Greek guy and his family who hosted me for a week," he says with the help of an interpreter through the phone.

Ali eventually left Greece after the end of Ramadan and is currently in Italy. Greece is not the final destination for the majority of unaccompanied minors. Many try to move on as quickly as possible until they reach their final destination, which is usually northern Europe where they have relatives.

If the conditions on the Greek mainland are bad, the Greek islands with so-called hot spots put children's lives at risk. On August 24, a 15-year-old boy from Afghanistan was stabbed to death by another minor after a brawl broke out in the minors' section of the Moria refugee camp on Lesbos. Two more children were injured, one seriously, and one was arrested.

Moria's section B can accommodate 160 children, yet according to UNICEF it hosts more than 520; a number that is increasing daily, as are the protests. Less than 10 days after the incident, some 300 children demanded their immediate transfer to Athens. The police responded with tear gas. Amir,* a 17-year-old unaccompanied minor from Afghanistan, was present and became extremely agitated when asked about the conditions and the police response. 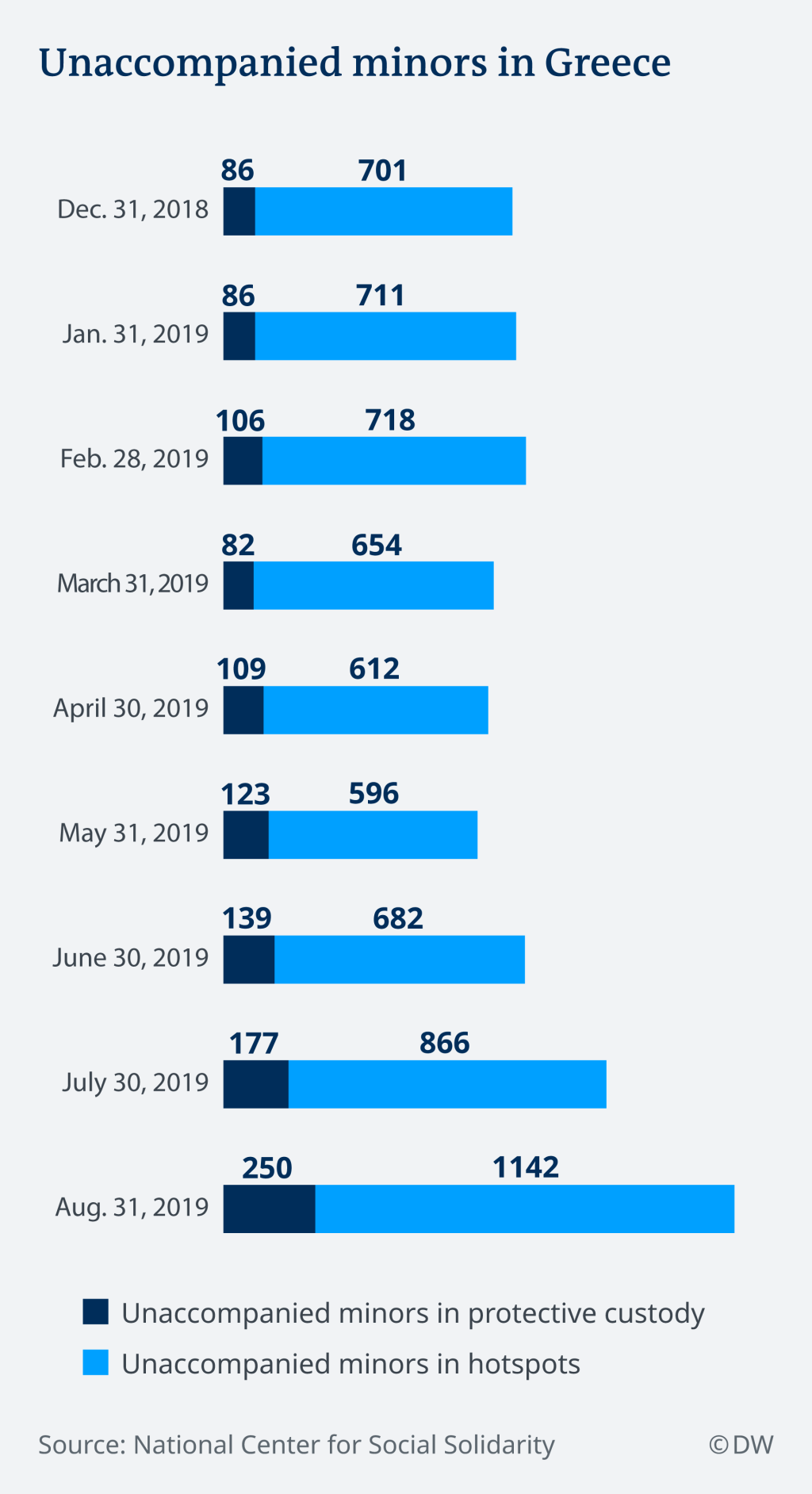 Following the death of the Afghan teen, Doctors without Borders (MSF) decided to provide psychological care for those involved in the incident. According to Katrin Brubakk, MSF's mental health activity manager, the incident was yet another traumatic experience for the children in the camp.

"We have a lot more psychological emergencies," says Brubakk. "People came with severe panic attacks. One really severe case involves a girl who hasn't spoken a word [since the incident], she hardly eats, and she has withdrawal symptoms. When the world feels too scary, they withdraw from the world."

Greece has reached its limits. However, children like Firuzeh represent a bright spark amid the darkness. Her goal is to study psychology, yet her lifelong dream is to become an actress and a dancer.

"Child refugees in Greece come to a very different place. When I first came to Greece I felt very strange. It's the language; it's the uncertainty of whether people will accept you. But conditions have improved from the time I came," she says.

*Names have been changed in order to protect the children's identity.

This article was produced with financial support from the Migration Media Award, funded by the EU. The information and views set out in this article are those of the authors and do not necessarily reflect the official opinion of the European Union. Neither the European Union institutions and bodies nor any person acting on their behalf may be held responsible for the use which may be made of the information contained therein.