A deadly fire has prompted calls to improve conditions at Greece's severely overcrowded Moria refugee camp. Some people have referred to the facility as nothing short of "hell."

Greek authorities on Monday vowed to address the dire conditions at the Moria refugee camp, and speed up asylum-seeker processing. The news comes a day after a deadly fire broke out at the facility, located on the island of Lesbos.

The fire originated in an olive grove nearby the fenced-in camp, where refugees are now also being housed in temporary shelters as Moria itself is already overcrowded. Shortly after the first fire, a second one broke out inside the camp, most likely inside a two-story modular home, which at the time was occupied by several families. Police have now confirmed that one woman died in the flames. Regional authorities, the UN Refugee Agency (UNHCR) and Greek media have reported that her infant child also died in the blaze. In a television interview, Lesbos mayor Stratis Kytelis said that the fire had also destroyed a hectare of land adjacent to the camp.

Moria is usually off limits to journalists. Smartphone video footage shot inside the camp has now emerged, however. The footage, presumably recorded on Sunday, shows large plumes of smoke and agitated camp residents. Eyewitnesses report that some of the individuals attacked firefighters, civil servants and the governor of the North Aegean region, Christiana Kalogirou. Police then used tear gas to get the situation under control.

Lesbos Mayor Kytelis says the situation remains tense. Talking to Greek broadcaster Skai, Kytelis said "just imagine what it is like for 12,000 people to be crammed into a camp that is designated for just 2,800 people." On Sunday, special police forces were dispatched to Lesbos to prevent the already tense situation from escalating further. Reporting on the events, conservative Greek daily Eleftheros Typos referred to the unrest as "chaos in Moria," while left-wing daily Efimerida ton Syntakton lambasted Greek authorities, with one eyewitness reporting that "while the fire was raging, people were also suffocating in tear gas."

For years, Greek and international media have drawn attention to the dismal conditions at the Moria refugee camp — or "Moria hell," as some refer to it. The camp, situated on the third largest island of Greece, is chronically overcrowded. Asylum-seekers are forced to wait hours in line to get meals, and there are too few showers and toilets.

In November 2016, a fire inside the camp claimed the lives of two people. Then-Prime Minister Alexis Tsipras promptly promised to do everything in his power to improve conditions in the camp, but not much has happened since then. In mid-September this year, the camp's manager, Yannis Balbakakis, threw in the towel, saying: "I am leaving with my head held high, but I am exhausted." But just after his resignation, he admitted to a radio station that he had left for "personal reasons."

The situation in the Moria camp worsened in August after 3,000 asylum-seekers arrived on the island. Since 2019, more than 14,000 asylum-seekers have taken the short boat journey from neighboring Turkey to the Greek island. In September, riots broke out when young migrants threw stones at police officers and camp staff. The teens were demanding that they be brought to mainland Greece. 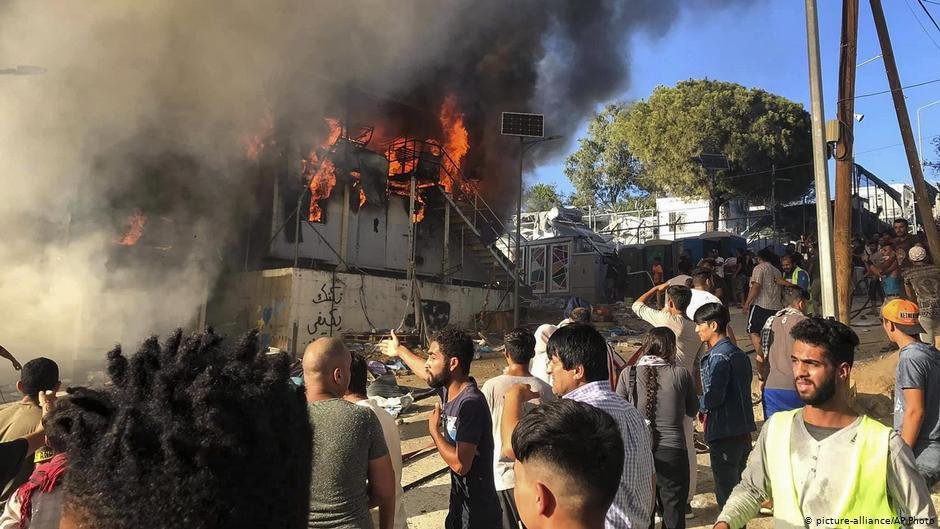 Conservative Greek Prime Minster Kyriakos Mitsotakis has now vowed to address the situation. On Monday, his cabinet met to sign off on measures to more "effectively" protect the Greek border. The European Union's Frontext border agency will play an important role in this new plan. And Mitsotakis wants asylum applications to be processed faster.

Political analyist George Sarantakos, however, doubts the Greek government will manage to get the situation under control. Speaking to Greek broadcaster Open TV, Sarantakos said "everybody knows that Athens cannot solve this problems all by itself." Adding that "not even the best government in the world could address such a problem all alone."