Irish rural town at the center of a conflict over refugees

The town of Oughterard in the west of Ireland has won a battle to stop a center being built for asylum seekers. The campaign against the direct provision center had been joined by anti-immigrant activists as well as those demanding a more humane system for refugees.

The construction fence already in place around the former Connemara Gateway hotel just outside the rural town of Oughterard in Galway county will now have to be taken down. After weeks of public protests at the site, the developer, Fayzard Limited, has announced it is withdrawing the tender and will not be proceeding with the development. The government said it was disappointed at the decision, but it understood the need to improve community engagement in such processes.

Fierce controversy had arisen over the proposal to open the facility a couple of kilometers out of town. In mid-September, a local councilor, Thomas Welby, organized the first public meeting on the plans for the direct provision center, a type of accommodation for asylum seekers set up in Ireland in 1999. Round the clock protests and social media campaigns followed, with a rally in Oughterard at the weekend attracting more than 2,000 people.

Under the direct provision system, asylum seekers in Ireland are accommodated in centers where their basic needs including meals are covered by the state. They are entitled to a weekly personal allowance of about 21 euros. 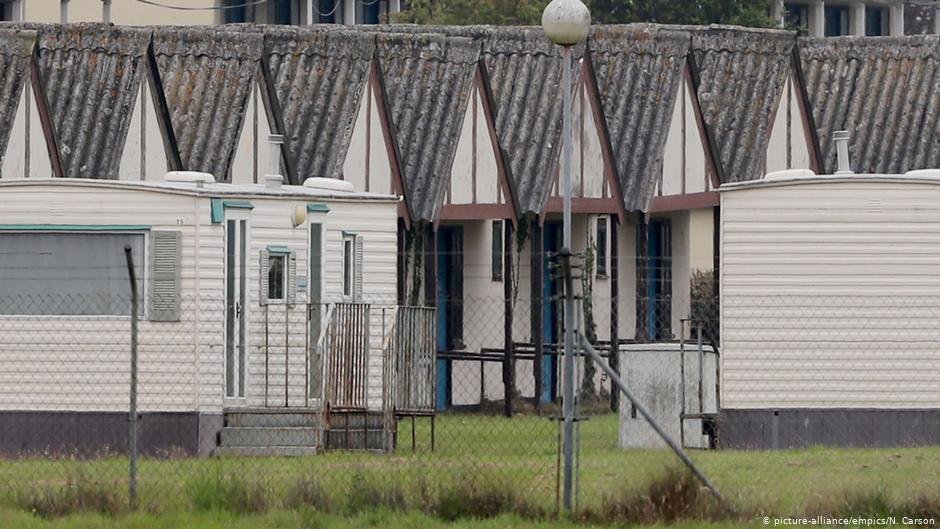 The locals in Oughterard wanted no such center in their town, not because they have a problem with migrants, but because they oppose the direct provision system, according to Welby. He says the Oughterard community has always welcomed people from all around the world. In last Saturday's protest, people carried placards saying "Yes to refugees, no to direct provision," while the main banner read "Oughterard says NO to inhumane Direct Provision Centre."

Opposition to the direct provision system extends well beyond the town of Oughterard. A protest was also held at the weekend in Galway. A spokesperson for the Galway Against Racism Network, which organized the rally, said they were protesting against racism and direct provision, according to the national broadcaster, RTE. Galway's mayor Mike Cubbard, who was at the protest in Eyre Square, said there was "no room for racism" in the city.

Local residents kept in the dark

As well as being opposed to the direct provision system, many residents of Oughterard were also concerned about the lack of transparency around the new center. The Irish Times reported on Saturday said the department of justice was understood to be in negotiations with the owners of the Connemara Gateway Hotel to house "less than 250" asylum applicants.

The department meanwhile insisted that it was unable to discuss details of commercial contracts in advance, according to the news website breakingnews.ie.

One of the protesters on Saturday's silent march, John Gibbons, said "the only benefactor for this model is the speculator paid millions or euros of taxpayers' money."

Activists across Ireland have long been urging the department of justice to consider alternative models to direct provision. Rory Clancy, a spokesperson for the Oughterard campaign, said the community itself had come up with some solutions. "Direct provision centers are not homes - we are all entitled to a home, and that's what we would love to give the people," breakingnews.ie reported Clancy as saying. 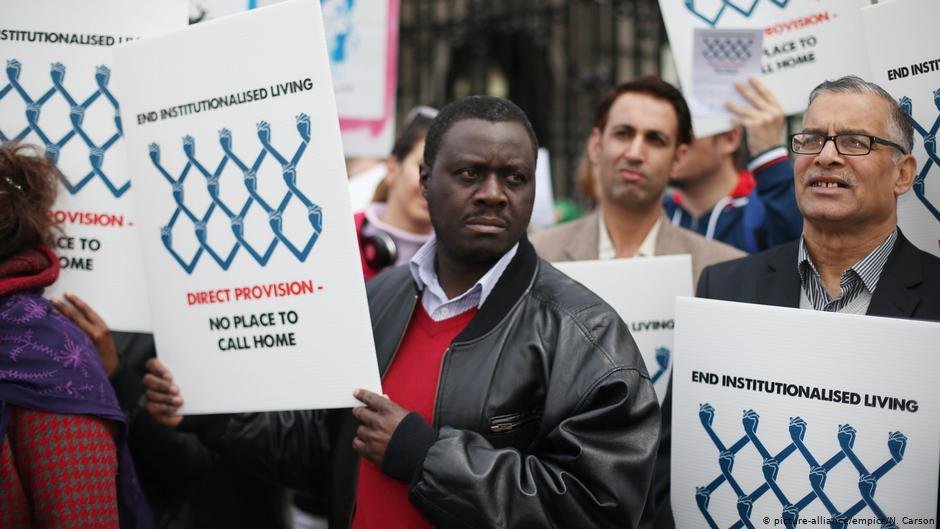 Many of the local townspeople also reportedly worried that an asylum seeker center would put more strain on already stretched public services. In Oughterard there is one doctor for 1,300 people, and schools in the town are reportedly at maximum capacity.

The majority of Oughterard residents "would give the shirt off (their) back to help refugees and asylum seekers", says Catherine Connolly, a local MP. But she says a small group from the far right hijacked the community's "genuine concerns." As a result, locals opposed to the direct provision system because they consider it inhumane found themselves in an awkward alliance with anti-immigrant activists.

At the first public meeting on the issue held in September, another independent MP, Noel Grealish, referred to African migrants as economic migrants "coming over here ...to sponge off the system here in Ireland."

"Let the minister know the fear - and it is the fear factor - that this is going to bring on this village, because we don't know, we don't know these people coming in," a video shows Grealish telling the crowd. Ireland's Prime Minister called on Grealish to withdraw his remarks, but that didn't stop them from attracting widespread support among right-wing nationalists including Gearoid Murphy, Gemma O'Doherty and Rowan Croft. The activists have since used social media sites like #Oughterard to spread racist messages.

#Ireland belongs to the Irish. This was the vision of Pearse and it will be our mantra as we take our country back, this time for good. #Oughterard is just the beginning. #EndCorruptionNow #EndGlobalismNow pic.twitter.com/u8Lxqc4lTO

The way we live is inhuman

The community of Oughterard is now under pressure to prove that their movement was hijacked and infiltrated by racist activists rather than being anti-migrant themselves. Meanwhile the government is continuing to deal with the direct provision and accommodation situation.

Figures in July this year showed that 6,355 people were living in around 40 direct provision centers across Ireland - 200 people more than the department of justice's stated capacity for the whole system, according to RTE. Around a third of those in the system are children.

The direct provision centers were intended to house asylum seekers for short periods. However, according to RTE, 40 percent spend more than two years in the centers. "The way we live - it's inhuman," an asylum seeker Siphasthisiwe Moyo told RTE's current affairs program Prime Time. "You can't move on. You don't heal, because you feel stuck in the same place. You are still stuck in that moment that drove you to come out of your country and come here." 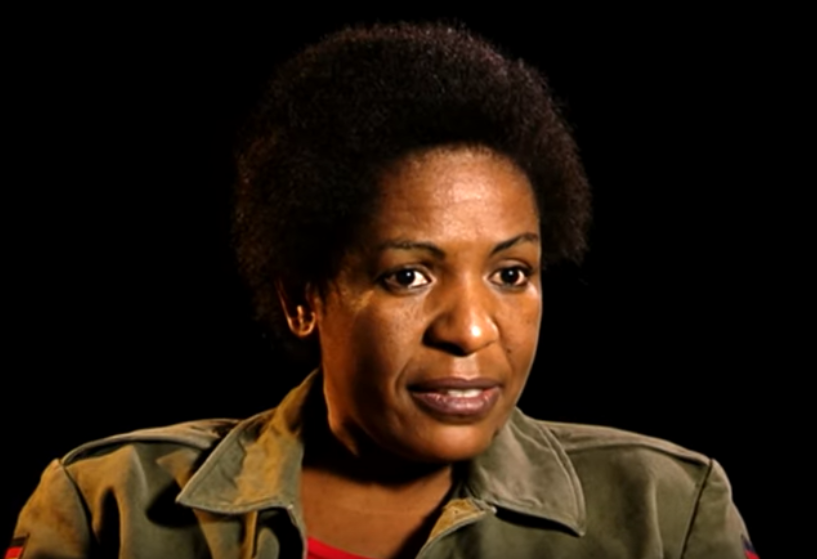 Many critics of the direct provision system say they isolate asylum seekers and prevent them from working, studying and contributing to the local community.

A local businessman involved in the Oughterard campaign said there was "more and more disturbing information about the inhumanity of the direct provision system." He said the community was determined "not to allow this social injustice to unfold on our doorstep," according to the Irish Times.

Since the decision to halt the development of the center at Oughterard, the justice department defended the direct provision system. The minister for justice, Charlie Flanagan, said comments made in recent weeks about the system had “totally mischaracterized” the nature of services. “Many EU member states provide services to asylum seekers through the center model and some 60,000 people have been supported by direct provision services over a 20 year period,” he said.

The department says it will evaluate other bids received and progress the remaining tenders in the Dublin and border regions.