Life in and around the infamous Moria Camp

Greece’s infamous Moria Refugee Camp currently houses over 13,000 people. With daily arrivals, the area around the camp is also home to hundreds more who live in official and unofficial camps. Despite all its administrative and humanitarian challenges, life goes on somehow. InfoMigrants reporters Aasim Saleem and Amanullah Jawad took pictures that depict life in and around the camp. 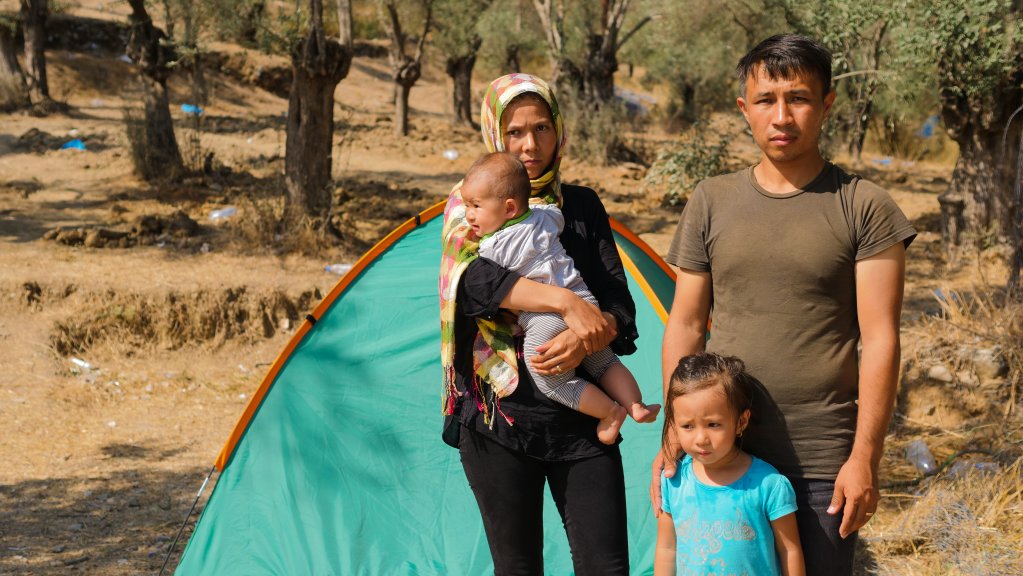 This Afghan family of four is currently residing in a camp just beside the main entrance of Moria Refugee Camp on the Greek island of Lesbos. Their container, or ‘ISOBOX,’ as it is called, was damaged by the fire on September 29. They say they lost all their belongings. Speaking to InfoMigrants, they claimed that the authorities have not been cooperative with them and that this tent (in the background), which was given to them by an NGO, is all that they have now. 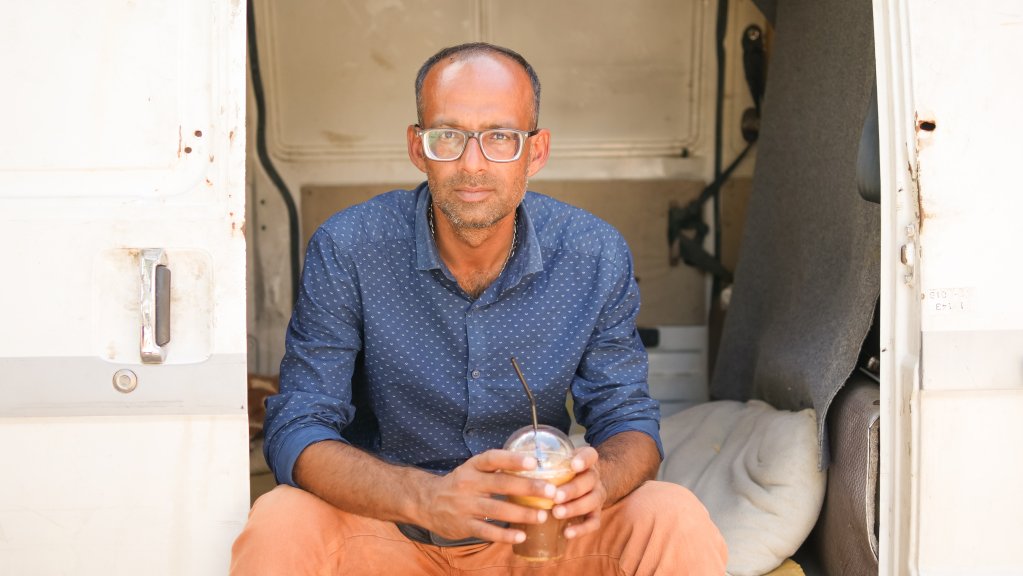 Naseer Ahmed is from Pakistan-administered Kashmir. He is in Lesbos since October 2016. Currently, he shares a makeshift tent outside Moria Camp with five other people. Ahmed’s asylum application has been rejected twice and thus he is not entitled to any official monetary assistance. The Pakistani asylum seeker told InfoMigrants that he is also suffering from Hepatitis C, but is unable to get any medical assistance. 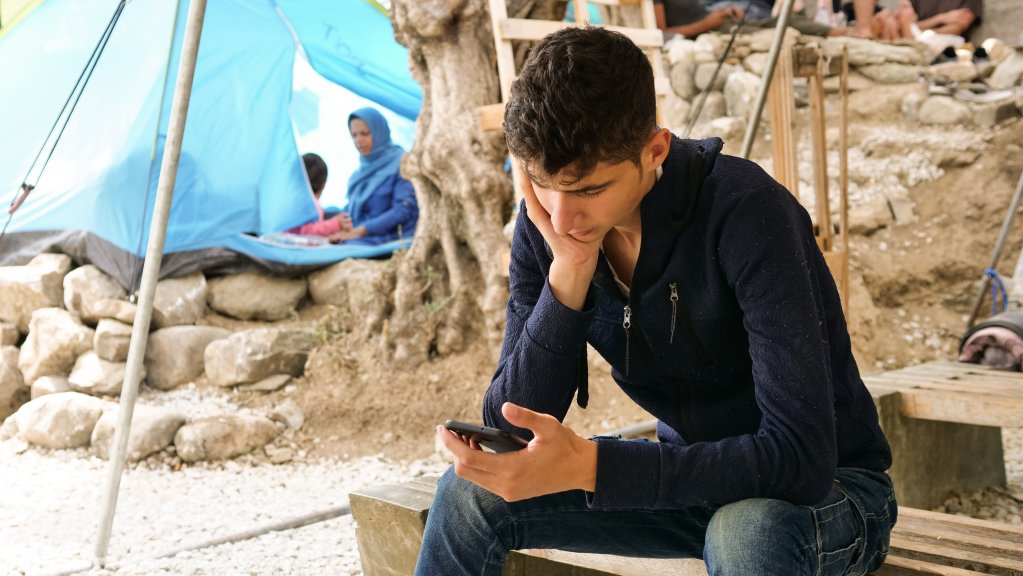 The majority of residents in and outside Moria camp are young men. Cell phones are an essential part of life, providing entertainment and information apart from necessary communication. In this picture, one can see a young Afghan migrant looking at his cell phone screen in anticipation. When asked, he said that he was waiting to hear from a member of his family who is currently in Germany and is about to find out about the decision on his application. With facilities meagre in and around the camp, children often lurk around with adults. Moria Camp’s section B has the capacity to accommodate 160 children, but the number of children there currently exceeds 520. These two Afghan girls currently reside there. 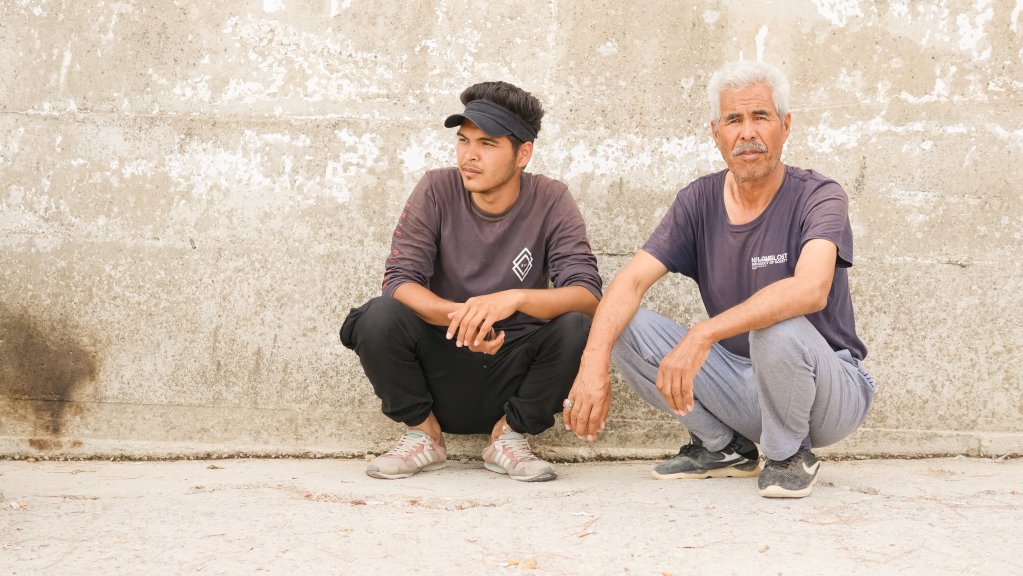 An old Afghan man with his son are seen sitting against the wall of Moria Camp. It was hot and humid in early October. The camp is located about 15 minutes drive from Mytilini, which is the harbor area on the island of Lesbos. Men, young and old, often find themselves spending time wandering in and around the camp, as a round trip with public transportation to Mytilini can cost up to 8 Euros. 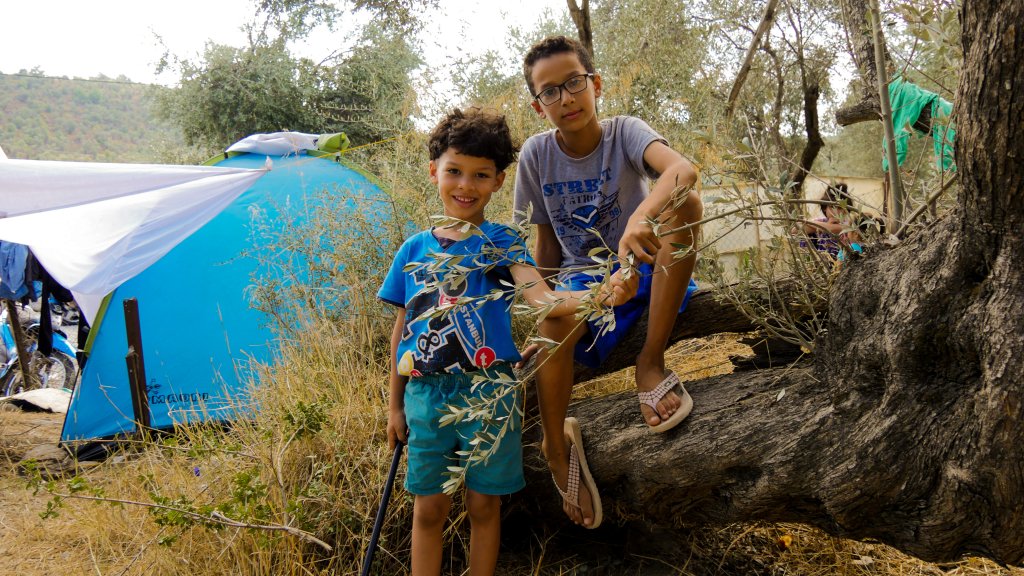 In this picture, two young brothers from Syria are seen in a playful mood. The sight of cameras, reporters and some interaction were welcomed by them. At Moria, it is not common anymore to meet Arab speaking refugees. Almost 70% of the residents are Afghan nationals with only a small proportion of other nationalities, though all together, asylum seekers from over 70 countries are said to be living in Moria. 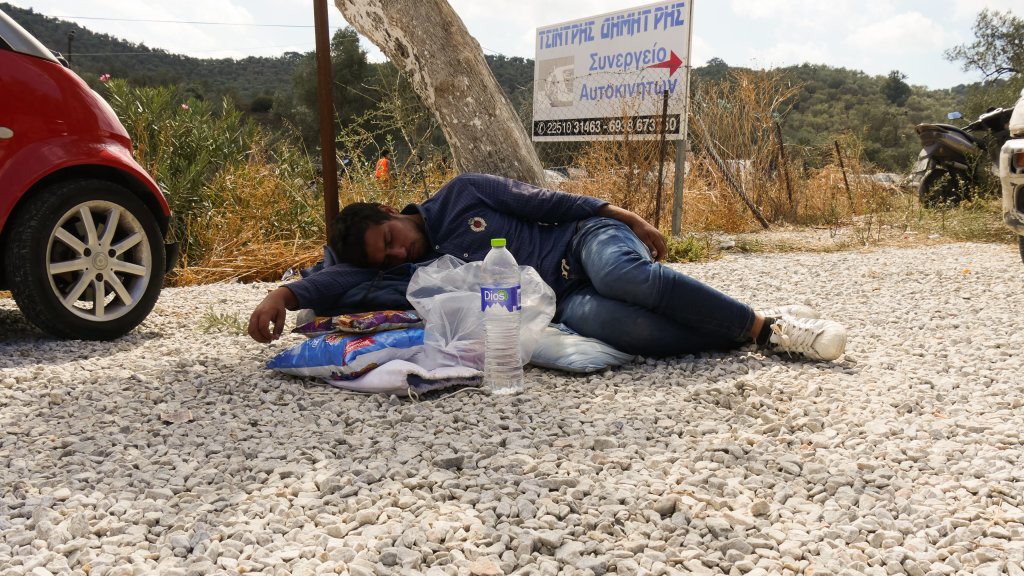 Most of the people living outside Moria are either new to Greece or are people who got frustrated with the living conditions and choose to live outside. This man prefers sleeping outside the main entrance, along the main road. Such scenes are actually quite common along the road that leads up to the camp. Lack of space in the tents and the camp generally lead the people to revert to such measure. One can see young men as well as families sitting along the main street or in corners, enjoying meal or taking a nap. In this picture, two Afghan refugees share a meal along the fence of a makeshift shop about 100 meters from the camp’s main entrance. A group of Syrian refugees enjoy a ‘sheesha’ - with flavoured tobacco. Syrians generally stick together, partly due to the fact that they are in the minority in Moria and find safety in groups. One of the two shops close to Moria Camp. Inside a van loaded with vegetables is present Monday to Saturday from 9:00 am till about 5:00 pm. It provides an escape for people who are fed up with camp food and opt to cook something for themselves, provided they can spare some euros. Cooking is considered a kind of a luxury, many cannot afford it at Moria. 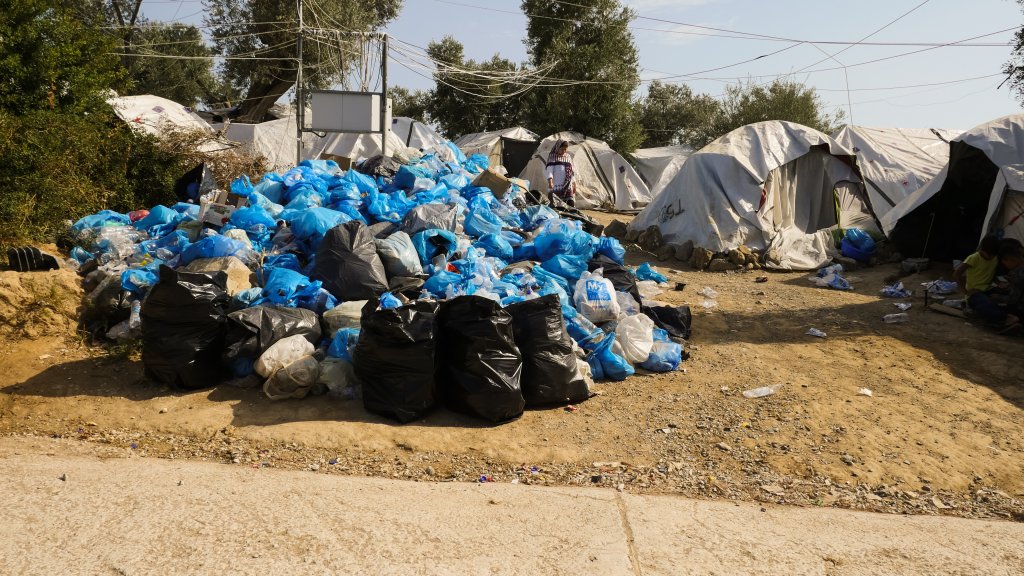 This picture shows the northern side of the ‘Olive groove’. This camp site is not managed by any NGO and has sprung up as more and more people arrive at Moria with no place inside. This part, which runs along Moria camp’s Section B, is rife with mismanagement. Rubbish bags, litter on the streets and unorganised tents are common in this part. The picture shows garbage bags right beside tents which house families with children. 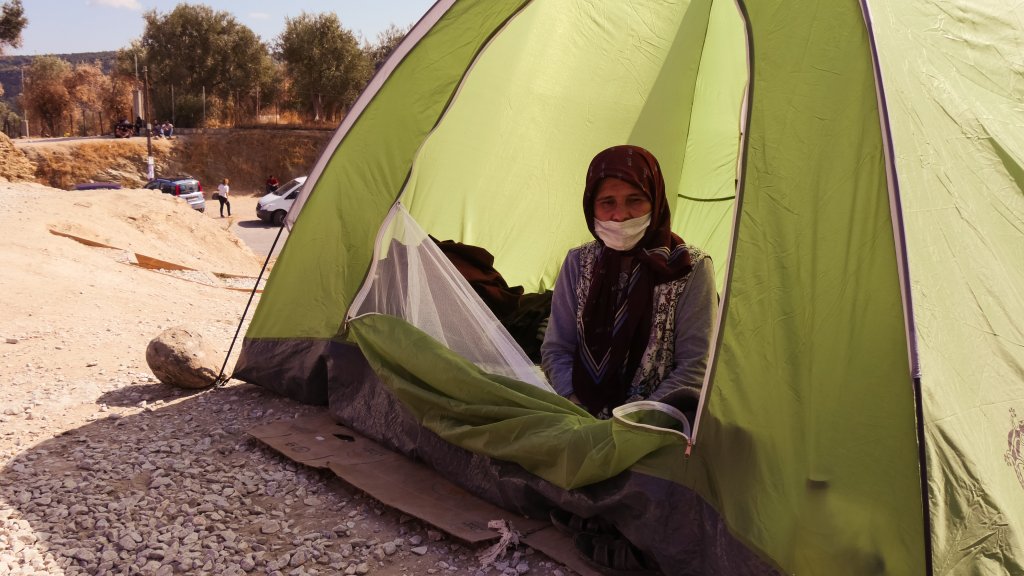 This 50-year-old Afghan woman told InfoMigrants that she lives in this tent with her husband and son. Sometimes, she said, they are given food, but not always. The family spent 17 days in Turkey without a roof over their heads. The boat they were traveling on shipwrecked off the Greek islands but an organization rescued them. They left Afghanistan because they were destitute. 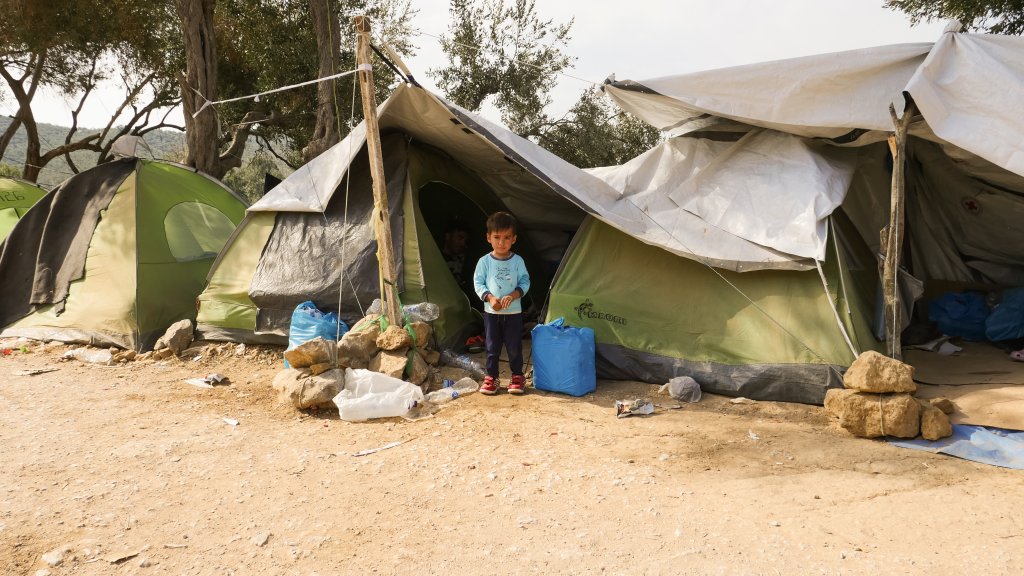 This picture shows a two-and-a-half-year-old Afghan child, standing in front of his family’s tent in the northern part of the 'Olive Groove'. As no NGO is managing the site, there are no functioning facilities for families with small children. Children as young as two can be seen wandering around barefoot in extremely unhygienic conditions. Two refugees from Syria find a solution to their grooming needs. The authorities are barely able to fulfil the basic requirements. Thus, grooming is a luxury most have to manage by themselves. Unable to work, people with skills can be seen ingeniously managing to work for some petty cash.