An app that saves lives with three simple words

'I love you' are perhaps the three words we cherish most. But if you find yourself in danger, especially as a migrant, you might remember another three words that could save your life.

Imagine that you're stuck in the middle of the open seas and you don't know how to tell anyone exactly where you are so as to get help. Or you make a mistake, mixing up digits and sending rescue workers to the wrong location. Or you simply don't understand how to navigate latitudes, longitudes, geo-locations and GPS coordinates.

Even on land, what happens if, in the heat of the moment, you confuse "Park Lane" with "Park Avenue" and you start running out of oxygen, as human traffickers attempt to smuggle you across borders in the back of a truck. Or what if you have to talk code to avoid suspicion by smugglers who might be abusing you?

Many things can go wrong in identifying your location in precarious situations in which migrants and refugees can often find themselves. A new app is trying to minimize the human error factor by upgrading the way in which people communicate about locations. 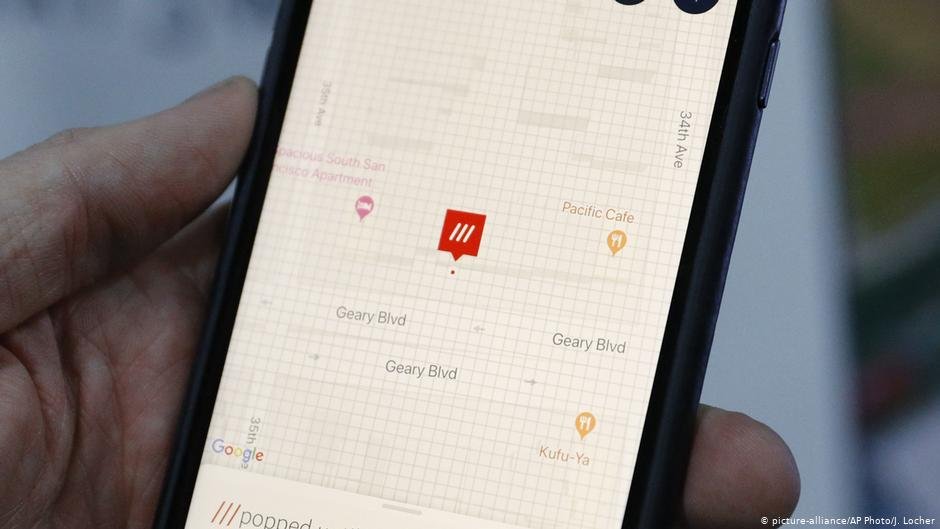 Three words that can make a difference

The app called "what3words" has mapped out the globe according to 57 million squares, each measuring three by three meters. These squares have all been given unique names made up of three unrelated words.

For example, you might be a Syrian refugee who starts his journey at the location ///huts.twirls.matchbox — a road in the town of Salamiyya. After a long journey, you might eventually have boarded a dinghy at ///redeemable.shies.eyepatch to get to Greece — a spot near the Turkish seaside resort of Bodrum. Currently you might be at ///commitments.pizza.shameless — a square at the Moria camp on Lesbos, or you might be sleeping rough at ///templates.ranking.edit — a street address in the Bosnian border town of Bihac.

"'what3words' is a really simple way to communicate location. It can be an incredibly powerful tool for when you can't say where you are. We are increasingly being used by emergency services and humanitarian aid companies all around the world," "what3words" spokeswoman Miriam Frank told InfoMigrants. Emergency services on board

The service is currently available in 37 languages, including Arabic, Greek, French, Spanish, Turkish, Kiswahili and English. So the location known as ///organist.oversell.portion is known as ///clavellinas.preocupamos.anado in Spanish or as ///laksemi.rapah.dikendurkan in Malay. That location happens to be on the shoreline of the Italian island of Lampedusa.

Emergency services around the world have started working with the app. A total of 35 local police services in the UK have recommended the public download the app in order to be able to share their precise location in case of a serious emergency.

Join us this week in supporting UK Police to raise awareness about rural crime. 👮♀️👮♂️

Describing exactly where a rural crime is taking place can be difficult. Watch how you can use the what3words app to help #LocateRuralCrime faster and more accurately.#Help999FindYou pic.twitter.com/crdiIjRIrs

The app has already been used in real-life situations in which lives were in danger. Earlier this year, a pregnant woman presumed to be a migrant was trapped inside a shipping container at the British port of Hull.

As she started to go into labor, the group of foreign nationals travelling with her contacted emergency services. However, with 20,000 shipping containers parked at the massive shipyard, they had to find a way to identify her location — fast.

Emergency responders asked the group to download "what3words," and thus they managed to respond in time.

The app has also been used to locate a group of British women who got lost in the woods in County Durham and to resolve a hostage situation in Humberside, as the victim managed to indicate to authorities where she was being held.

There have also been instances of applications outside the UK. The app was used in emergency situations during the last Muslim hajj pilgrimage in Saudi Arabia. And ambulances in South Africa have adopted the service to reach people in informal settlements and townships faster. Finding the way back home

The app was designed by "what3words" founder Chris Sheldrick, who says he grew up in rural England, where his childhood home didn't have a postcode.

"We got used to getting post meant for other people, or having to stand in the road to flag down delivery drivers," he told the British Broadcasting Corporation (BBC).

"I tried to get people to use longitude and latitude but that never caught on. It got me thinking, how can you compress 16 digits into something much more user-friendly?"

Sheldrick then worked out with a mathematician that there were enough three-word-combinations using a base of 40,000 words to pinpoint every spot on the planet. "Some 4 billion people in the world don't have an address," Sheldrick explained, highlighting how big a difference his app could make.

And the rest is history. Mongolia, Djibouti and Ivory Coast have even adopted the app for their national postal services, and a deal with Nigeria's postal service has also recently been signed.

The momentum of Emergency Services is spreading beyond the UK, now to #SouthAfrica! 🇿🇦

The app has not caught on with migrant communities yet. The Mediterranean rescue facilitation service Alarm Phone told InfoMigrants that no one had contacted them yet using the service. Alarm Phone did say that most emergency calls they received originated either from satellite phones or using WhatsApp (wherever there is reception available). "what3words" could therefore become part of the way that migrants reach out to services like Alarm Phone.

Meanwhile, there has also been some criticism of the app, including the fact that each language has its own word list, creating room for misunderstanding. The same location in English does not translate literally into Arabic or Portuguese. Instead, that location will use three completely different words in another language, potentially allowing for confusion.

There have also been allegations of cultural insensitivity when it comes to the exact three words chosen for a location by the algorithm used by the company. For example, the entrance to 10 Downing Street, the home address of the UK prime minister, is ///slurs.this.shark, which could be considered to carry a negative connotation.

Meanwhile, the gate to the Nazi concentration camp Auschwitz, located in present-day Poland, is known on the German version of "what3words" as ///zuwachs.pilotprojekt.gedicht, which translates into the three words "growth," "pilot project" and "poem".

Despite a number of linguistic issues, "what3words" could be a lifesaver, should you find yourself in a difficult situation on your journey.

"what3words" is available for download on iOS and Android and also available online as a website at what3words.com