Hunger, filthy toilets, no electricity: What it's like for migrants in Bosnia’s Vucjak camp

The conditions in the migrant camp in Vucjak, Bosnia, are grim. For the camp occupants, things have gotten even worse after foreign volunteers were banned from the camp. InfoMigrants went to Vucjak to talk to the people living there.

It's a rainy morning in late September when we visit the Vucjak camp in northwestern Bosnia and Herzegovina. It has been raining overnight, temperatures have plunged to below 10° Celsius. The tents are soggy and muddy, and the residents are miserable. The ground is littered with garbage.

The makeshift camp, which currently houses around 600 occupants, is located around 10 kilometers from the city of Bihac, in the middle of nowhere. It was set up by the Bihac municipality on a former chemical dump. There is no running water, nor access to electricity. The few toilets that were installed in mid-July are filthy, their stench is unbearable. The water tanks that feed the showers are so small that only a few dozen people per day can use them. It's no wonder that the UN has deemed Vucjak “unfit for housing people”. 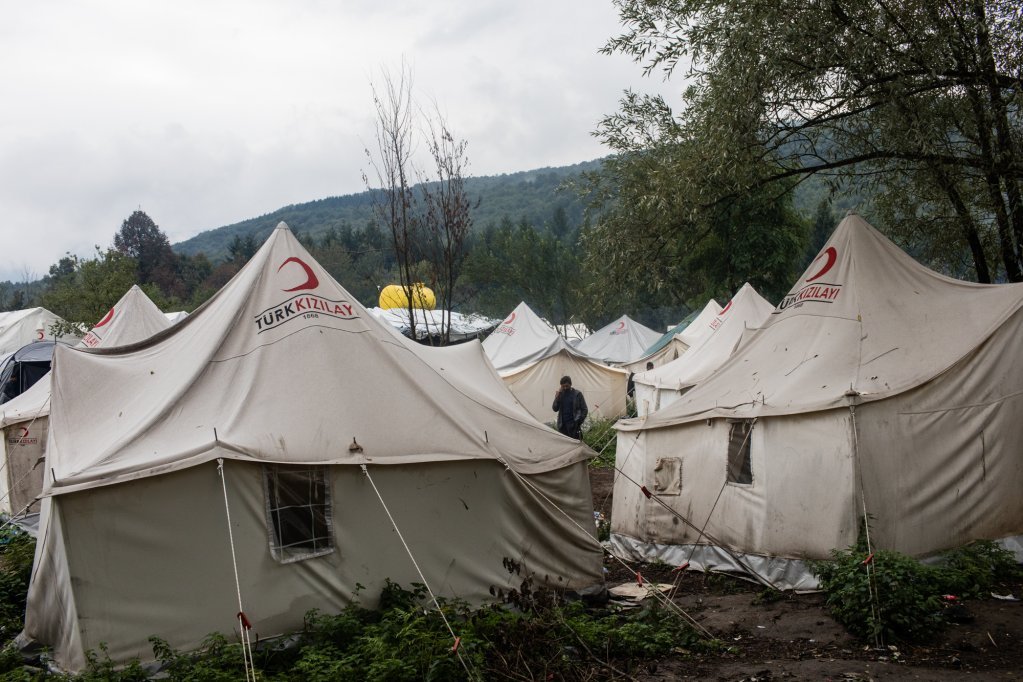 ‘Here, everyone is hungry’

Food, or rather the lack of it, predominates the migrants’ concerns. There's a huge queue in front of the tent where meals are distributed. Wasim, a 34-year-old Pakistani, describes the situation in stark terms: "Here, everyone is hungry." Wasim says that he has lost a lot of weight since he left Pakistan ten months ago. Taking out his mobile phone, Wasim proudly displays his wedding pictures. The groom in the photo looks completely different.

The Red Cross only serves two meals a day, at 10 am and 3 pm. The organization says that it does not have the financial means to provide dinner to the camp occupants. "Nobody helps us, the municipality gave us 2,500 euros at the beginning and that's all," says Mohammed Cehic, a member of the local Red Cross team.

That's why Pakistanis and Afghans have set up stalls in the camp where they sell sweet milk tea, sodas, traditional Pakistani bread and even cooked dishes. But few people here can afford to eat at these makeshift shops. 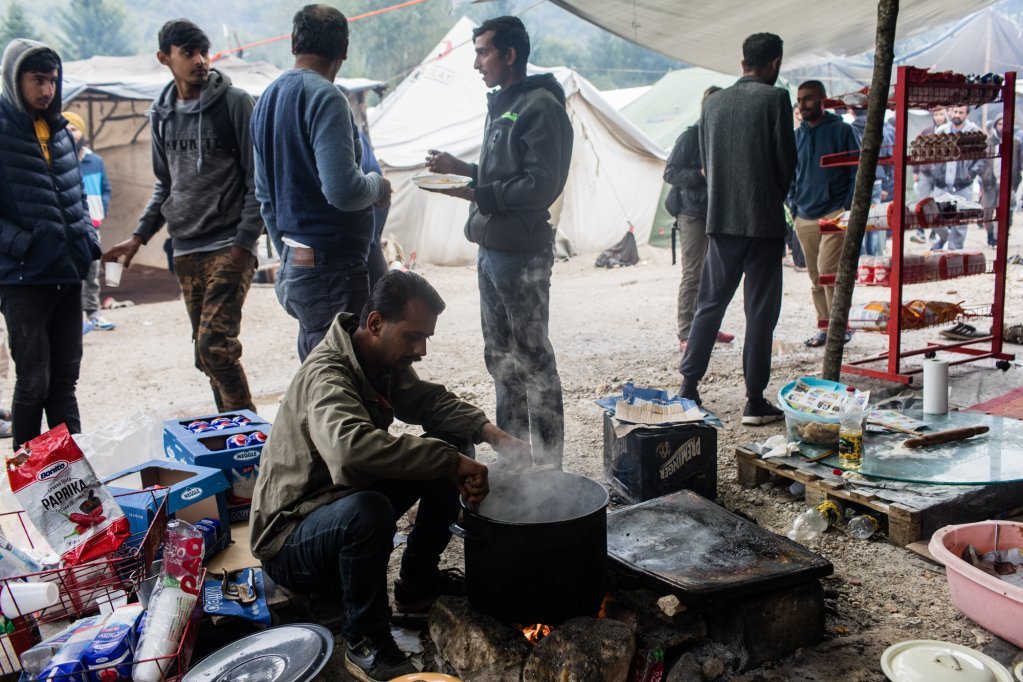 In addition to these difficult living conditions, there is the desperation of not being able to win the "game." That's what the migrants call the attempt to cross the Croatian border and reach EU territory.

Bosnia, a non-EU member, has seen a spike in the number of migrants recently. That's because neighboring Croatia -- as well as fellow EU members Hungary and Slovenia -- have sealed their borders. Croatian police systematically send the migrants they intercept back to Bosnia. These "push-backs" are illegal because they violate the right to ask for asylum.

Croatian police have been accused of using physical violence and destroying migrants' mobile phones. Migrants also say it’s not uncommon for the police to confiscate their clothes or shoes.

Since January 2018, the IOM has registered 45,000 migrants in Bosnia. Several thousand more have crossed the country without registering with the authorities. Most migrants in Bosnia are living in Una-Sana Canton, the country's most north-western region. The municipalities and eponymous towns of Bihac and Velika Kledusha -- which are internationally known as migrant hotspots -- are located in this region.

Kashif, 19, still has his left arm covered in a thick bandage. A week earlier, the young man from Pakistani-administered Kashmir was turned back and beaten by Croatian police. "For a week, I could not bend my arm. I thought it was broken, now it's a little better," he says.

In the center of the camp, right next to the tent that serves as a mosque, no one seems to be paying attention to the two large maps of the area displayed on the wall by the Red Cross. Big red blotches on the map indicate zones suspected of having landmines, a legacy of the war that ravaged Bosnia in the early 1990s. For the dozens of migrants who set off every night on foot for the Croatian border, the mines pose a very real danger. 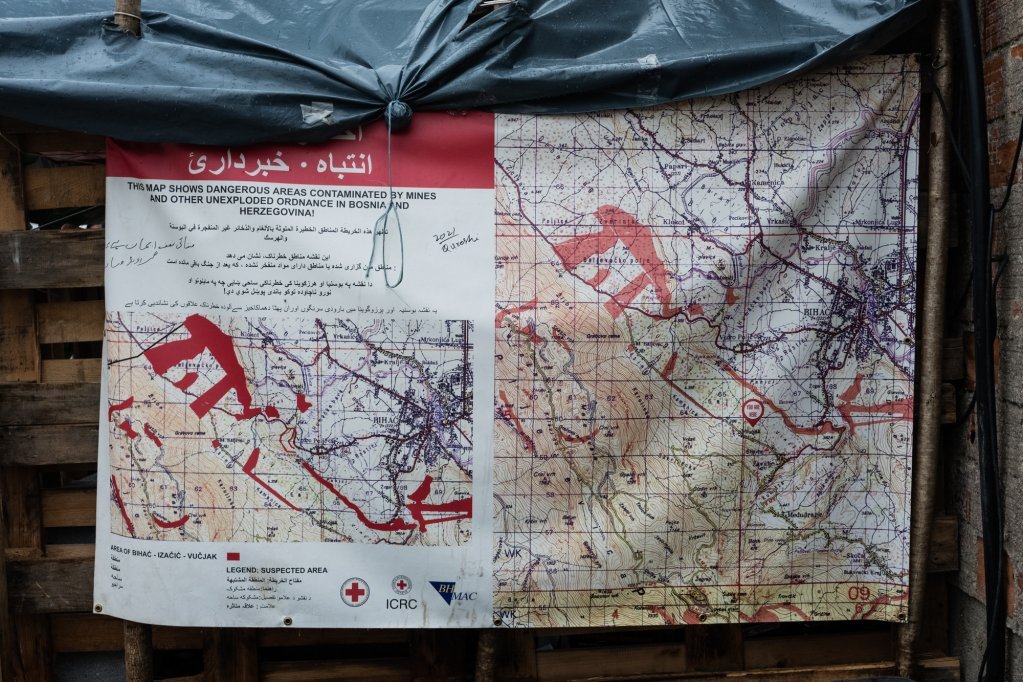 But, more than mines, the migrants fear wild animals from the forest surrounding the camp. This summer, snakes have been spotted in the camp and occupants regularly hear wild boars roar on the outskirts of the camp.

Peter Van der Auweraert, head of the IOM (International Organization for Migration) mission in Bosnia and Herzegovina, is concerned about the lack of security and the "unacceptable" living conditions at the Vucjak camp.

When the mayor of Bihac came up with the idea of setting up the camp there, the IOM sent technicians to check the land to be used for the camp, the IOM official explained. "At that time, we immediately informed the mayor that we had ruled out the use of this land," he says.

That's not just because of the mines -- or because the roads that lead to the camp are very narrow, which can make it difficult for trucks carrying supplies to the camp. The IOM technicians found that the soil contained methane, an extremely flammable gas. This means that whenever migrants light up small fires to cook or heat food, the risk is considerable.

Even though the IOM, the EU and the US ambassador to Bosnia and Herzegovina spoke out against opening the camp, Bihac authorities went through with their plans. Some residents in Bihac had been protesting against the presence of migrants in the city centre, calling for the relocation of the migrants.

For Van der Auweraert, though, "there’s no reason to put migrants [into the Vucjak camp], there are options available that are far more humane than this place."

Race against the clock before winter

Both IOM and Red Cross say that they don't know of any plans by Bosnian authorities to improve conditions in the Vucjak camp. They don't know if anything will be done to keep the migrants in Vucjak safe from the cold and bad weather in the winter.

Van der Auweraert says that no decision to open a new reception center can be made without a political agreement with the Bosnian government and Una Sana Canton authorities.

Creating sturdier accommodation on the Vucjak campground, the IOM experts says, is out of the question. According to Van der Auweraert, it would be impossible to build containers and install them before winter.

"So today, the solution is to install a center in existing buildings. But, even with that, we are really running against the clock," he says. 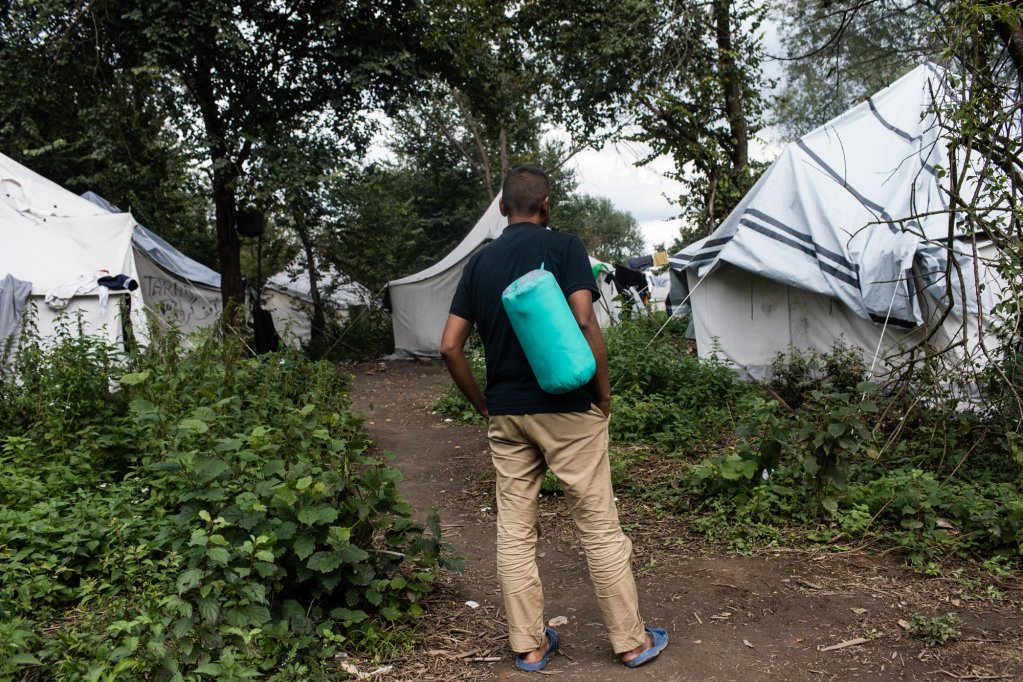 A source familiar with the issue, who declined to be publicly identified, told InfoMigrants that the Bosnian interior ministry plans to transfer around 6,000 migrants from Una Sana by the end of October. That includes the 600 occupants of Vucjak, who would be sent to the Bira reception center in Bihac, and the Miral center in Velika Kledusha.

Miral is already running at full capacity. Bira could eventually accommodate a few hundred people, but not more than 500.

Meanwhile, more and more international organizations are demanding that the closure of the Vucjak camp. Foreign volunteers, who had been providing basic medical care at the camp, were expelled from the camp by Bosnian authorities and allegedly ordered to leave the country.

Doctors Without Borders (MSF) is currently in negotiations with Una Sana canton authorities over the opening of a mobile clinic in Zavalje, about a kilometer away from the Vucjak camp. The new clinic would be the second structure of its kind run by MSF in the canton. The first is in Velika Kledusha.

The new clinic could potentially somewhat compensate for the expulsion of medical volunteers from the Vucjak camp. But the MSF clinics are meant to treat "those outside the camps," says Nihal Osman, the organization's deputy field coordinator in Bosnia and Herzegovina.

In Zavalja, "we will be open three times a week, for the number of hours deemed necessary,” explained Osman. During the rest of the week, the clinic will move around Bihac to serve other, more isolated migrants.