After the private rescue vessel Ocean Viking saved 176 migrants over the weekend, the Italian coast guard picked up 108 migrants Monday morning. While the coast guard brought its migrants to the southern Italian port city of Roccella, the Ocean Viking is seeking permission to take the migrants to Italy or Malta.

The rescue teams picked up 102 migrants, including nine children and four pregnant women, from a rubber dinghy off the Libyan coast on Sunday after having rescued 76 from another dinghy overnight, the aid group said on Twitter.

🔴 BREAKING The @SOSMedIntl and @MSF_Sea teams onboard the #OceanViking have completed a second rescue of 102 persons from a rubber boat in distress 40 NM off the Libyan coast. Among them are 12 women, 4 of them pregnant, and 9 children. There are now 176 rescued people onboard. pic.twitter.com/BhaVdSdXGD

"Although they are all exhausted from their dangerous escape, all the survivors appear stable so far," the organization said.

In an online statement, SOS Mediterranee’s Head of Operations Frederic Penard called having the migrants on deck "an emergency solution." A rescue "can only be considered once they reach a shore when they can be taken care of," he added.

The Ocean Viking, run by nonprofit groups SOS Mediterranee and Doctors Without Borders (MSF), is currently waiting some 10 kilometers southeast of the Italian island of Lampedusa in international waters for being assigned a safe port in Malta or Italy.

"We ask Malta and Italy to step up with a dignified disembarkation for all 176 people onboard," MSF said on Twitter, adding that the ship had turned down an invitation to return the migrants to Libya.

#OceanViking has moved north to int’l waters between #Malta & #Lampedusa.

With Libyan authorities offering no alternative to #Tripoli as a place of safety – contrary to int’l law – we ask #Malta & #Italy to step up with a dignified disembarkation for all 176 people onboard. pic.twitter.com/7RRf3laAZA

According to SOS Mediterranee, the current rescue operation marks the fourth time the Ocean Viking is waiting to be assigned a port to disembark rescued people since the vessel started operations in early August.

Separately, the Italian coast guard picked up 108 people from two small boats on Monday morning and brought them to the southern Italian port city of Roccella. According to media reports, the migrants are from Iraq and Iran. 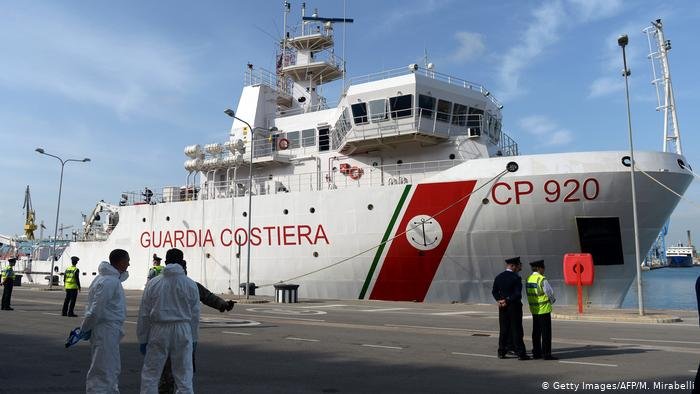 The media reports said the coast guard had initially taken 64 people from a small motor boat, among them five women and four children.

Around one hour later, the coast guard discovered a small sailboat with 44 people on it, among them a woman and a child. Those people were also brought to Roccella.

In late September, the Ocean Viking brought 182 migrants it had rescued to Sicily after being stranded for two weeks at sea with 217 rescued migrants on board. 35 of the rescued migrants were taken in by Malta shortly before the disembarkation on Sicily.

EU countries France, Germany, Portugal, Ireland and Luxembourg agreed to take in two thirds of the migrants, while the Italian Catholic Church said it would take responsibility for the remaining 58.

But the migrants who disembarked in Sicily still face a long road full of uncertainties ahead.

Despite efforts by some European leaders and some ad hoc agreements to take in migrants, there is still no mechanism in place for how to distribute migrants rescued at sea across the European Union.

Italy, France, Germany and Malta in late September agreed on a temporary redistribution plan, but it still hasn’t been finalized. One reason is that no other EU member states has hitherto joined the initiative.

The goal would be to redistribute individuals within four weeks of their disembarkation, German Interior Minister Horst Seehofer said about the plan.

Over the past months, migrants rescued by charity vessels like the Ocean Viking have been left waiting at sea because Italy and Malta have refused to take them in until other EU nations agreed to share some of the burden.

According to UN refugee agency UNHCR, over 80,000 people have arrived in Europe via the Mediterranean so far this year, and an additional more than 1,000 are believed to have died or gone missing between January and October, 688 of those on the central Mediterranean route.