At least three people were hurt in a clash between asylum seekers in a town on the Greek island of Samos. After mass violence erupted and fires broke out in the severely overcrowded migrant camp, Greek authorities evacuated the camp.

A mass brawl broke out between Afghan and Syrian residents of an overcrowded migrant camp on the Greek island of Samos on Monday night, forcing police to use tear gas to disperse the crowd. That’s according to local media reports.

The violence, apparently between groups of Syrians and Afghans, erupted in the town of Vathy late on Monday. The situation escalated further when fires broke out in makeshift shelters around the camp, forcing a partial evacuation, according to the Greek broadcaster Skai.

"Half of the 6,000 people who are stuck in Vathy camp on Samos are women and children," medical charity Doctors Without Borders (MSF) said in a tweet Monday night, demanding that "Children and other vulnerable people must be evacuated from the Greek islands to safe accommodation." In another tweet, MSF said Tuesday that 600 people lost their shelters to the fire.

Several tents & containers in #Samos were destroyed & 600 people who were left w/ nowhere to sleep were given shelter by NGOs. @MSF is supporting the local hospital by providing interpreters,will provide emergency psychological aid & essential items to people affected by the fire pic.twitter.com/mf5SOlKFXB

The camp, where applications are vetted for people seeking asylum in the European Union, was built for 650 people but has a current population of around 5,700, or more than nine times its capacity. That’s according to Greek government data.

Overcrowding across the Aegean

On other Greek islands in the Aegean Sea near the Turkish coast, where scores of migrants continue to arrive daily in the hope to eventually travel onwards to wealthy European countries, the situation is similarly grave. The camps on the islands, most of them vastly overcrowded, unhygienic and violence-prone, at present house over 32,000 migrants and refugees.

Lesbos, Greece’s third-largest island by area, is home to the Moria Refugee Camp, the country's most overpopulated migrant facility. The site is currently the home of over 13,000 people, or more than four times the center's capacity. With daily arrivals, the area around Europe's biggest migrant camp is also home to hundreds more who live in official and unofficial camps.

In August, an Afghan boy was killed in a fight in Moria; and in late September, a migrant woman died in a fire and over a dozen people were injured. Lesbos recorded nearly half of all 10,551 new arrivals to the Greek Aegean islands in September.

Greece is currently hosting a total of some 70,000 asylum seekers, mainly Syrians and Afghans. There are fears that Turkey's ongoing offensive in Syria will spark a new migration wave to Europe.

Following a dramatic rise in the number of arrivals in recent weeks that brought facilities on the Greek islands to the brink of collapse, Greece in early September began moving hundreds of asylum seekers from the overcrowded camps to mainland Greece.

In September, for instance, slightly more than 5,000 asylum seekers were brought from the Aegean islands to the mainland. But that’s not nearly enough to ease the overcrowding on the islands as more than twice as many people (10,551) arrived on the islands in the same month. 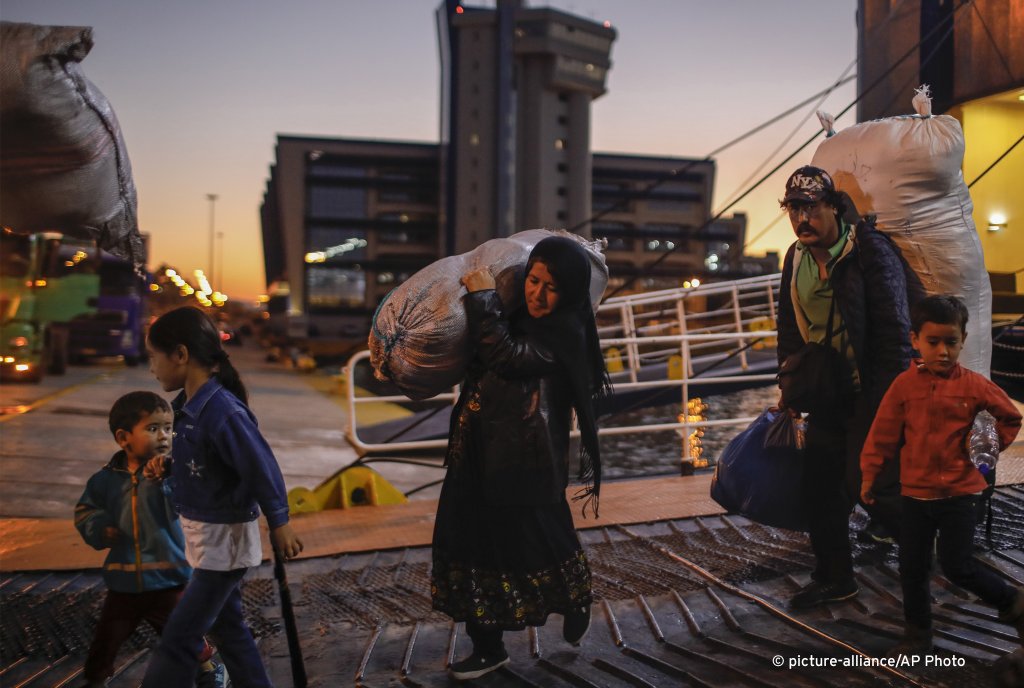 Other measures the Greek government decided to implement include speeding up asylum applications and returning 10,000 migrants to Turkey.

Since the beginning of the year, more than 36,000 migrants have arrived on the Greek islands, causing the situation on the ground to remain critical. Experts are skeptical it will change any time soon.

There is also growing exasperation on the islands and local authorities are urging the government to accelerate relocation efforts.

On Monday, a group of local residents on Lesbos gathered to protest as volunteers from Spanish aid organization Proactiva Open Arms prepared to land on the island. Some threw stones at the organisation's rubber dinghy. There were no injuries and the organisation later downplayed the incident.

In a new report published on Monday, UN refugee agency UNHCR warns that some 13,000 children who have arrived in Greece so far this year were suffering under terrible conditions.

The report titled Desperate Journeys noted that children made up about one in four of the total migrant arrivals in Greece, with nearly 2,100 of the children being unaccompanied.

On the Greek Aegean islands, as of the end of September, 8,300 children were living in overcrowded and dirty camps under "extremely risky conditions," the UN report says.

With material from dpa, AFP