Fears that winter will bring a humanitarian catastrophe in Bosnia

In the Vucjak migrant camp in Bosnia, over 800 people remain without running water, electricity or functioning toilets. Local authorities have announced that two other official camps will soon close, leaving more than 2,000 additional people sleeping outside. With winter approaching, many fear a humanitarian catastrophe.

A winding road that takes you up the hill ends in a narrow, dirt path before opening into a clearing, surrounded by forest. On a cold and rainy afternoon in late October, small groups of men have gathered around campfires, burning plastic bottles, food packaging and whatever dry piece of wood they can find to warm up. A lonely stray dog roams around the camp in between tents and makeshift shelters, hoping to score some food. There is litter scattered everywhere. Welcome to Vucjak, a former landfill turned into a refugee camp, only a couple of kilometers away from the EU border.

“This is not [a place] for a human being, this is barely [a place] for animals,” says Anwar Ullah Mengal, 17, from Pakistan. Anwar hopes to get to Belgium. “I’ve heard it is a good country to live in, and that it doesn't take long to get their citizenship,” he tells InfoMigrants. But ever since he came to Bosnia, some fifteen days ago, he has been stuck in Vucjak, a place he calls a “jungle camp”. 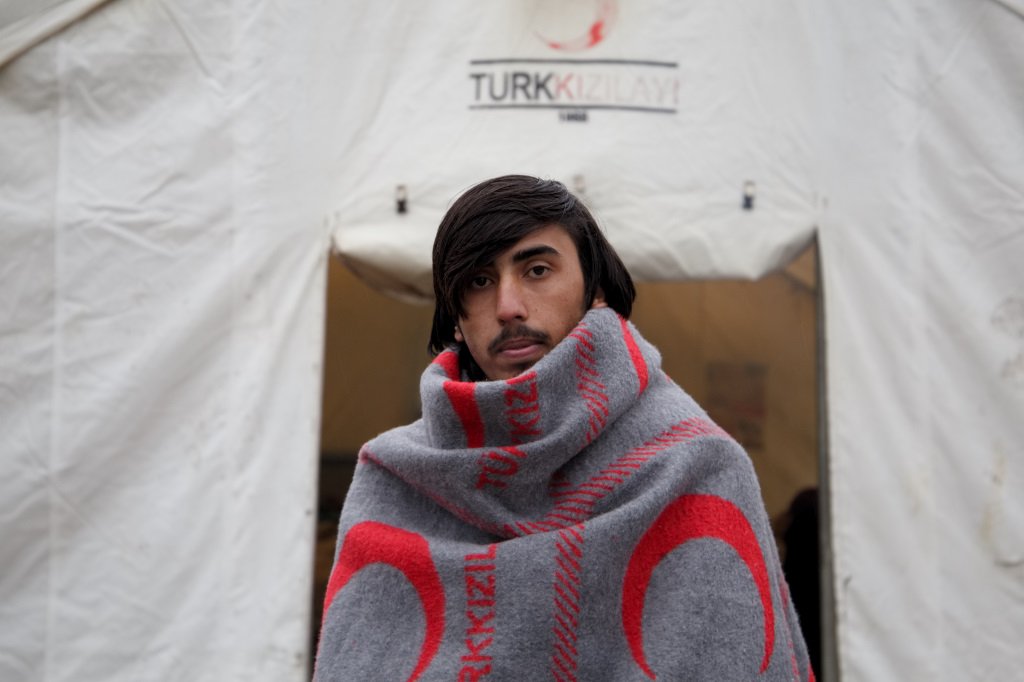 No place for newcomers

Since January 2018, the International Organization for Migration (IOM) has registered over 45,000 migrants in Bosnia. There are currently some 7,000 migrants in the country, most of them in Una Sana Canton, a northwestern region bordering EU-member Croatia.

Bihac and Velika Kladusa, towns in Una Sana Canton, have become hotspots for migrants trying to enter the EU. In 2018, four official refugee camps were open in these two towns, and they have been run by the IOM, in cooperation with local partners, since then.

Today, there is no more room for newcomers in the camps. “This spring, we were told by the operational headquarters at the cantonal level that the maximum capacity of Bira camp (in Bihac) was 1,500 people and Miral camp (in Velika Kladusa) was 750 people. Ever since we have not been able to go above that official capacity,” explains Peter Van Auweraert, Western Balkans coordinator for IOM.

On the morning of October 31, a dozen men are waiting under a light drizzle outside of Bira camp. Only those who have a valid IOM card – meaning that they have been registered already – will be allowed in. “They will wait but we don't have space for them. So they will either leave or sleep outside in front of the camp. We can't let them in,” says Amira Hadzimehmedovic, IOM coordinator for Bira. 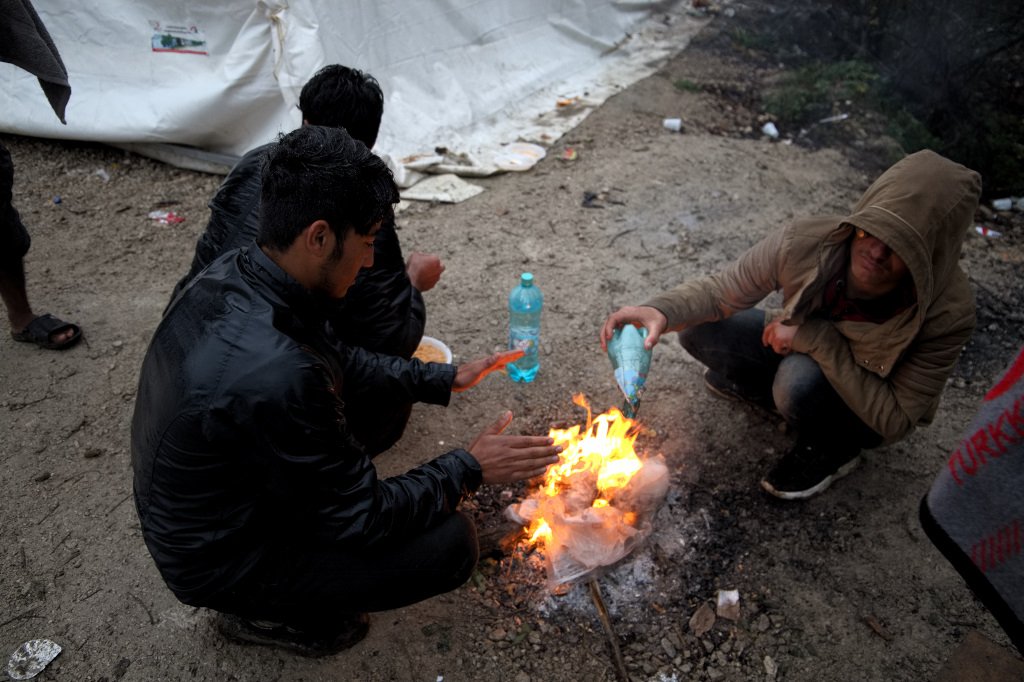 The only exceptions to this rule are minors, women, families, the elderly or minorities – they will either be lodged in Bira or one of two other camps in Bihac (Borici and Sedra), intended for women with children or families.

When the camps reached their maximum capacity, migrants were forced to squat in empty houses or sleep on the streets. In June, the city authorities of Bihac decided to move migrants who were sleeping rough to Vucjak, some 8 km from the city center. Then, the UN country team in Bosnia published a statement asking the authorities to “cease this relocation until a more suitable place is available,” because it judged the location “entirely inadequate for the purpose of accommodating people there.” Nothing was done.

Four months later, Vucjak is still unfit for human habitation – there is neither running water nor electricity, the toilets are unusable, and the surrounding forests are littered with landmines left over from the Yugoslav wars in the '90s.

On October 21, the mayor of Bihac announced that the city would stop financing water distribution and waste collection in the camp. In the meantime, the cantonal Administration for Civil Protection agreed to step in and provide temporary funding for the water supply, which is still delivered to Vucjak in trucks. 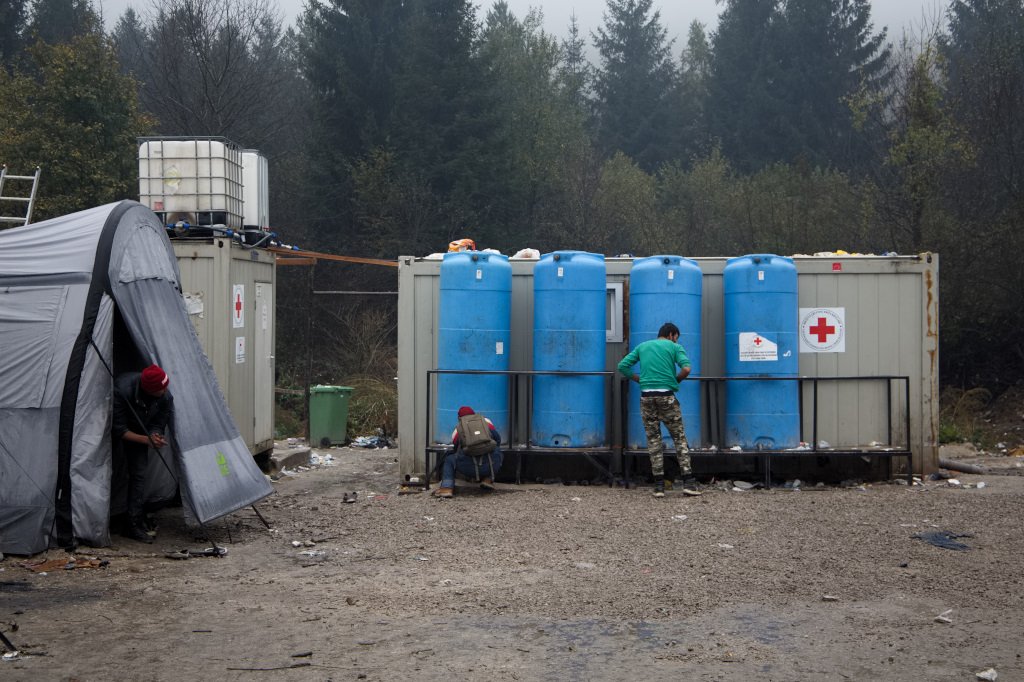 While migrants were not left without water, the tanks supplying the improvised showers are too small, so most of the migrants wash in the nearby springs or use buckets. Because of the unsanitary conditions in the camp, scabies is already widespread. There is no medical unit in the camp itself, only a mobile clinic run by Doctors Without Borders (MSF) in Zavalje, about a kilometer away from the Vucjak camp.

The only power comes from generators which are used mostly for charging mobile phones. The current tariff for a phone charge is one Bosnian mark (50 cents).

The local Red Cross is the only organization present in Vucjak today. They distribute two meals per day – breakfast at 10 am and lunch at 3 pm – and rely entirely on donations from their sister organizations. “It has been a big challenge to secure enough food for all the people here,” says Samir Midzic, secretary of Red Cross of the city of Bihac, who was present in the camp for the lunch distribution.

Many migrants say that they don’t get enough food. “We are often hungry,” says Afzul Musa, 22, from Pakistan. “Look at this bread. It’s from this morning, and it is already all dry,” he tells InfoMigrants, showing two dry slices of bread. There are some makeshift shops set up by migrants inside the camp selling tea and hot food, but few people can afford to pay. The tents in which the migrants sleep – a donation from Turkish Red Crescent – are leaky. When it rains, puddles of water form inside. A few migrants have sleeping bags or old mattresses – most sleep on the muddy ground covered with cardboard boxes, with only thin blankets protecting them from the cold.

In late October, the temperatures hover around 7° C or 8° C during the day, and 4° C in the evening. Many migrants are not dressed for the cold weather. They lack winter clothes and wear only flip flops or open shoes. Anwar Ullah doesn't take his blanket off his back as he is walking through the camp. “But it doesn't help at night. I am cold. Sleeping in the tent is like sleeping outside,” he tells InfoMigrants.

The regional authorities of Una Sana canton recently announced that the lease agreement for the camps of Bira and Miral, expiring by November 15, would not be renewed. Federal authorities from Sarajevo have announced that an alternative location for the camp will be provided, but Peter Van Auweraert from IOM warns it's a race against the clock. “Even if we get an alternative location tomorrow, we will need time to set up the place. I cannot see a scenario in which we would be emptying the camps Bira and Miral at the same time,” he says.

Van Auweraert believes that closing the two official camps would lead to a humanitarian catastrophe. There are currently 750-800 migrants sleeping in Vucjak. If the two camps were to close, over 2,000 people would end up sleeping outside. “When the temperatures drop to minus ten, the people will die,” Van Auweraert says. 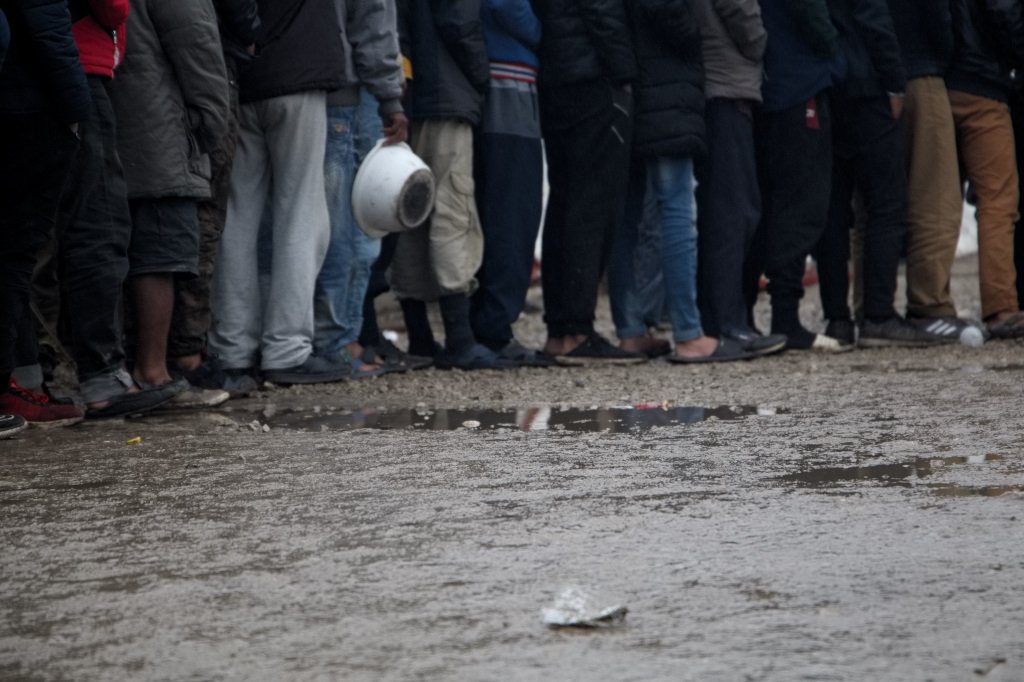 'Game' is the ultimate goal

In both Vucjak and Bira, none of the migrants we spoke to were aware of the possible closure of the official camps. For most of them, the goal is to “go game,” meaning to cross the Croatian border and reach the EU before the winter and the snowfalls.

Saffiuollah Zakhil from Afghanistan has tried to cross into Croatia ten times already in a bid to get to Munich where his brother lives. He claims he has been illegally pushed back out of Croatia by the Croatian border police.

Migrants trying to cross into Croatia have frequently reported instances of abuse committed by the Croatian police, saying they have destroyed their phones, burned their clothes and shoes and confiscated their documents and money. Zakhil sees no alternative but to try to cross the border again. “I will try a hundred more times if I need...Inshallah!”

The migrants in Bihac have also reported having trouble with the local police. In the official migrant camp of Bira, the security at the gate doesn't let the migrants in and out in groups larger than five people, and the gate is completely closed after 10 pm. In Vucjak, there are no security controls in the camp – apart from one police post at the entrance – but the migrants claim the police round them up when they catch them in the city center and bring them back to Vucjak. “When we are trying to go to a market or a shop in Bihac, the Bosnian police catch us and bring us here, and when we try to go to Croatia, the Croatian police catch us. So we live here, stuck in the jungle,” says Afzul Musa.