For migrant and refugee women who have suffered trauma during sea journeys, learning to swim can be a healing experience. A swimming group in southern Germany helps refugee women from different parts of the world overcome their fears.

“Water lifts the body and the soul,” says Marianne Ermann. A retired social worker, Ermann has been helping asylum seeker families in Germany for more than three decades. Now in her late 70s, she still volunteers her time and energy. This week, Ermann was awarded a regional integration prize for her project “Therapeutic swimming for refugee women.”
The women meet once a week at the local indoor pool in the Bavarian town of Hersbruck. On her first day, Dalal from Iraq wore a borrowed pair of bathers. Her two sons, aged 10 and 18, were amazed to discover that she was going to learn to swim.
The aim of Ermann's project is to help women who have had traumatic experiences at sea during their journeys of migration to overcome their fears. The participants are helped to develop a sense of their bodies, and a sense of trust in themselves and the water. 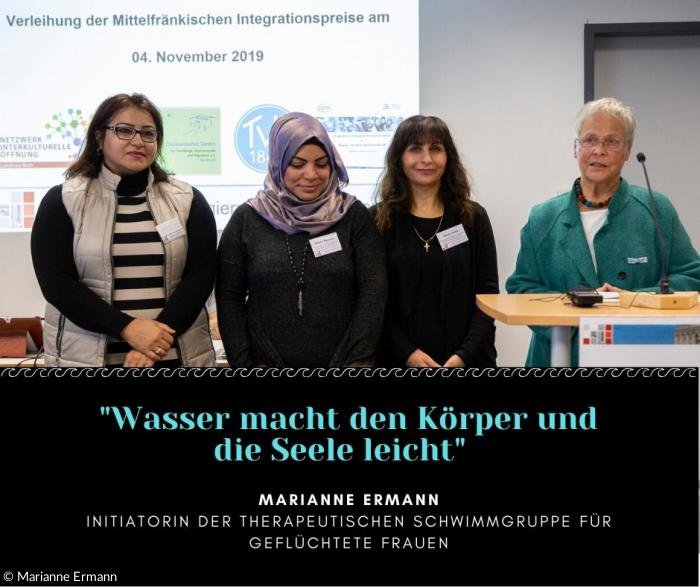 So far, at least 40 women have been through the course. Batoul, a mother of five girls, is one of them. “In Syria, I always loved the sea,” she told the news agency epd. Another young woman from Syria, Nesril, looks after her girls while Batoul does some laps and concentrates on improving her skills.
In some of their home countries, these women would not be allowed to enter the water in public. They have never been taught to swim, and they are understandably afraid.
Marianne Ermann is there to offer support. “The thing that often makes people panic is not knowing how to put their feet back on the bottom when they’re in a swimming position,” Ermann says. “Head up, knees tucked in.” Once they learn that, the rest is easy.
Nesril, Batoul, Dasin, Gülenc, Jude, Hanan and Dalin are refugees from Syria, Turkey, Ethiopia or Pakistan. Two of them swim in a burkini – a kind of swimsuit that covers the arms, legs and head. Others wear a one-piece, while another woman is in just a bikini. The women are very different, yet they accept each other without prejudice, says Ermann. “That’s the best thing.”
Sometimes, during the lesson, a woman will suddenly be reminded of the trauma she experienced. “Then we gather in close and do breathing exercises,” Ermann explains. Working alongside her is Hanan, a translator, whom the women have also learned to trust. The group usually meets on Sunday mornings. Ermann will phone one of the women and says she’s free, and then the message is passed on to the rest. Ermann herself pays for the pool admission from donations.
When they are through the turnstile, she explains to the women who are new about using the lockers and the plastic entrance token. For those who don’t speak German, things like finding the toilets, or knowing what to do if you lose the token can be challenging. And what should you do when someone comes up and starts asking where you’re from? “Then just say Berlin,” is Ermann’s pragmatic suggestion.
There was one time when Ermann felt she had to step in to protect the women in the group. A young man by the side of the pool was watching the women intently. When Ermann approached him, he said “he was the son of one of the women in our group,” she explains. He just wanted to know whether his mother had been telling the truth and that she really could swim!
German water safety guidelines can be downloaded in several different languages here.
With material from a report by Jutta Olschewski, epd