Pregnant without papers: 'It's hell'

Mary is Ghanaian and several months pregnant. She lives in Hamburg, but she has no residence permit or health insurance – which could pose a risk to her and her baby. Many migrants without documents don’t seek important medical treatment because they are scared of being deported.

Mary is Ghanaian. She lives in Hamburg, but she has no residence permit or health insurance – which means a risk for her and her baby. Migrants without documents don’t seek important medical treatment because they are scared of being deported.

“Where do you live?,” Maike Jansen asks. Kneeling on the floor, the midwife smiles at Mary, who is pregnant. “I have no fixed address,” – Mary hesitates: “I live here and there.” Members of the local Church parish take turns looking after her, she says, not wanting to give her real name. “That’s hard, not having a fixed place to stay,” the midwife says kindly. Mary nods and clutches her tissue.

What is it to live without a residence permit? “It’s hell!,” Mary bursts out. She says it three times. “When someone does something to me I don’t make a big deal out of it, I don’t even remember it.” She doesn’t say what things are done to her. The most important thing for her here is healthcare. 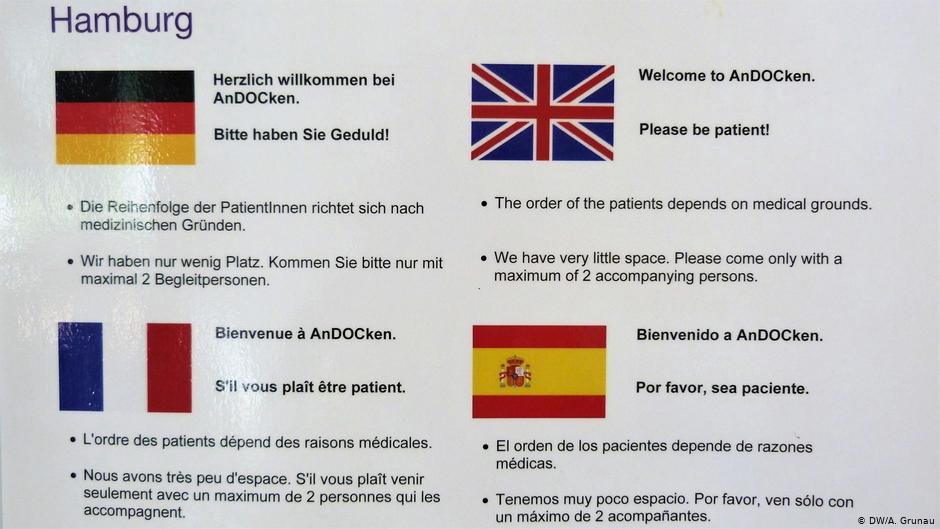 “Here” is the Andocken medical practice for undocumented migrants in Hamburg, run by Diakonie, Germany’s protestant charity organization. “We guarantee medical confidentiality,” a multilingual sign in the reception area says. Patients are already lining up outside the door before the clinic has even opened. The staff are a group of general practitioners, a social worker and a gynecologist. Maike Jansen, a midwife, joined them in April. A second midwife is also expected to join the team.

Mary recently saw the gynecologist, Teresa Steinmüller. The diagnosis: high blood pressure, overweight, blood and bacteria in her urine and only one kidney – all health risks for her and her baby. Many women are also suffering from trauma, Steinmüller says. Some have been raped during their journey, have undergone female genital mutilation or have anxiety about children who have been left behind. Mary has entrusted her daughter to an aunt in Ghana. 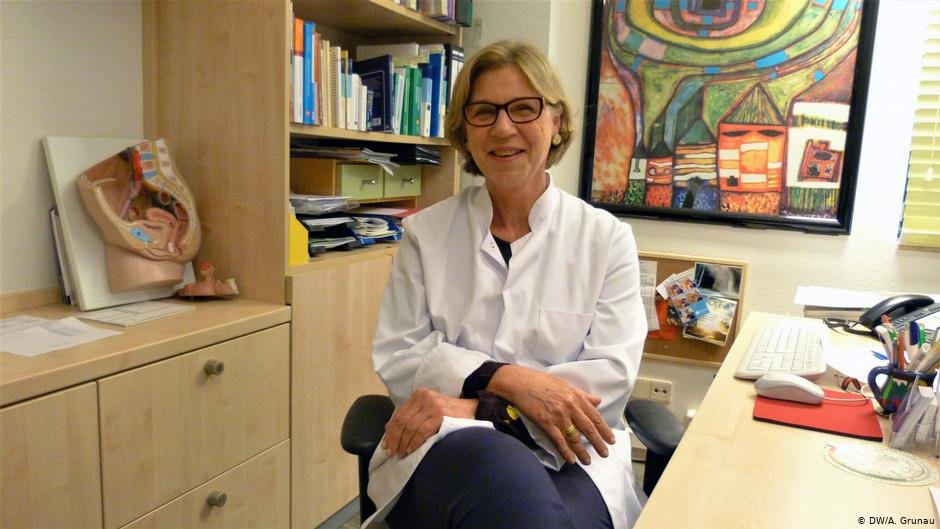 Life without papers, and fear of being caught and deported are highly stressful for pregnant women, says Steinmüller, who is also a psychotherapist. “They have to deal with anxiety all the time.” The results are depression, sleep and anxiety disorders as well as physical conditions like infections and premature rupture of the membrane. Nearly half of pregnancies are high risk, making antenatal care especially important. “These women need much more care,” she says.

Doctors advise against return to Ghana

Midwife Maike Jansen has done a lot of work abroad and with migrants and refugees. She takes her time with Mary. Gently she feels her belly, lets Mary feel her baby’s position in the uterus and listen to the amplified sound of blood flowing to the fetus through her umbilical cord. Mary becomes calmer, her voice quieter. She only has one kidney. The reason she came to Europe was so that she could donate one kidney to her cousin in England, she says. In spite of the transplant, the cousin died. Mary was left alone, and her visa expired. 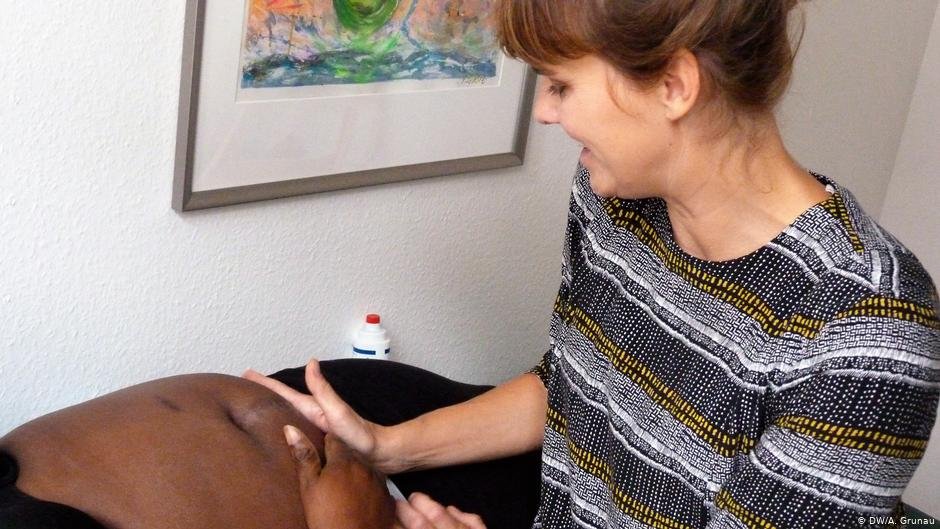 Mary says the doctors have warned her not to return to Ghana because she wouldn’t be properly cared for with only one kidney. According to the German Foreign Ministry’s assessment of the West African country, “medical care does not compare with that in Europe and is problematic in many areas related to equipment, hygiene and technical capacity.”

A healthy diet is rare

Mary ended up coming to Hamburg because other Ghanaians said they could help her here. She tells Jansen that they showed her how to get to Andocken and gave her food. Since finding out that she is too overweight, she has stopped eating the traditional dish, Fufu. In fact, since her last visit to the clinic, she has lost weight and her blood pressure has dropped. She says she has been drinking more water and trying to do more exercise. 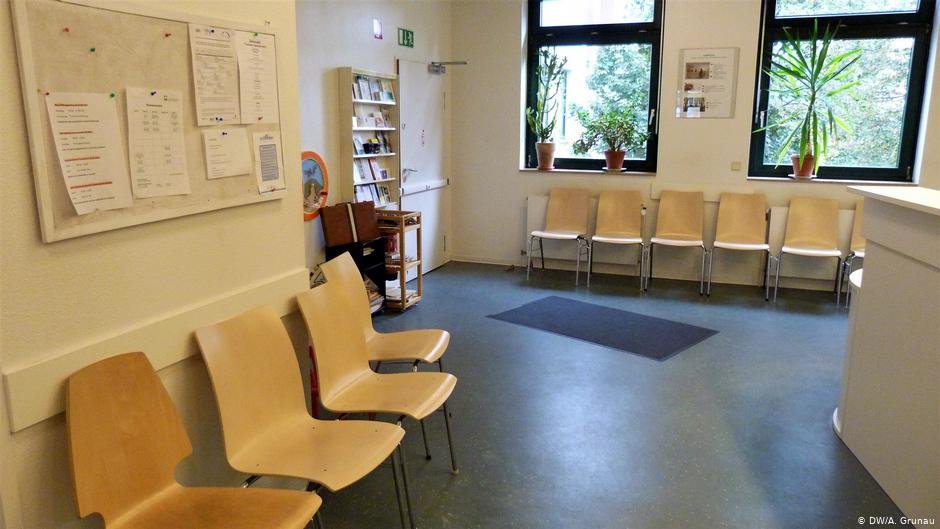 Maike Jansen praises Mary’s efforts. She knows that it’s hard for women without a place to live and money to buy the fruit and vegetables they need to live healthily. “You can’t expect that of them.” She gives them folate, iron and magnesium supplements and vitamin pills and recommends cheap home remedies for urinary tract infections. Every year, Andocken helps around 200 pregnant women. Most are from Ghana or other African countries, a smaller number from Latin America, Asia or countries neighboring the EU. The practice is financed through donations.

In Germany, irregular or undocumented migrants like Mary are legally committing an offence. Official organizations, except for schools, are duty bound to report all cases of to the immigration authorities. This is why Mary never gets on a bus without a ticket and she tries not to attract attention. It’s not known how many undocumented individuals live in Germany: The latest figures from the Federal Agency for Civic Education estimate that in 2014 there were between 180,000 and 520,000.

The right to health is a human right. Mary has a right to treatment for acute illness and antenatal care. But without health insurance, she has to put in an application if she wants a scheduled appointment with a doctor. Many undocumented migrants put off important treatment for long periods because they are scared of being deported, health workers report.

In Germany it is rare for undocumented people to be issued with health insurance papers and treated in the public health system. But throughout the country there are many so-called Medinetze (medical switchboards) and Medibüros (clinics) offering people who have no health insurance anonymous and free access to medical care. In 2018 the Malteser, a relief organization, provided care to around 650 pregnant women without medical insurance. 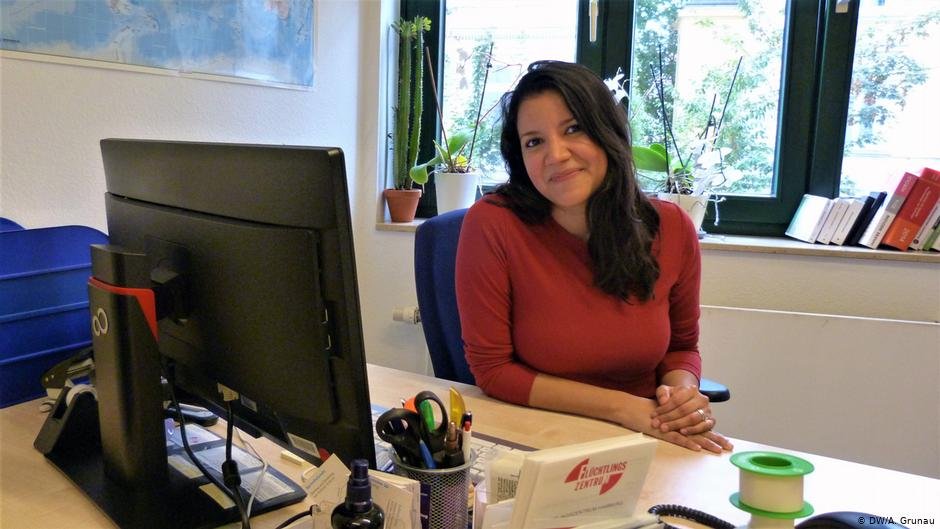 In an emergency, everyone has the right to be treated anonymously in hospital. But putting this into practice “is really difficult,” says Maria Jose Guillen Ramirez, a social worker at Andocken. “If it’s an emergency the hospital has to take them, but there are hospitals that don’t do it.” Hospitals that do help often don’t get any money, she says. A group of experts has also argued that hospitals are not fulfilling this legal obligation.

In Hamburg it’s up to a clearing house to check whether undocumented migrants – among them many pregnant women – are covered by the public health system. If not, urgent cases can be financed through an emergency fund, but this is limited.

Fear of the authorities can have serious legal consequences for children, according to “Catholic Forum Living Illegally.” If they have “no birth certificate, they can prove neither their existence nor their family links.” This means that Mary would be unable to prevent being forcibly separated from her baby.

After week 32 of the pregnancy, Mary can apply to the immigration office in Hamburg for a “ban on deportation” which lasts for at least eight weeks after the birth. During this period, she is safe from being deported and she will be insured, explains social worker Ramirez. A hospital birth alone costs several thousand euros. None of the women has that kind of money – without documents they can’t get regular jobs. Most of them work as cleaners in private homes for little cash, as long as they are still physically able.

Many are afraid that they will be deported after the two months of “maternity leave” are over, Ramirez says. If the baby’s father is a German citizen or has a residency permit, and he has acknowledged paternity, then the mother is allowed to remain in Germany until the child turns 18. Mary hopes that her baby’s father agrees to be the birth certificate. “I pray to God that he does.” 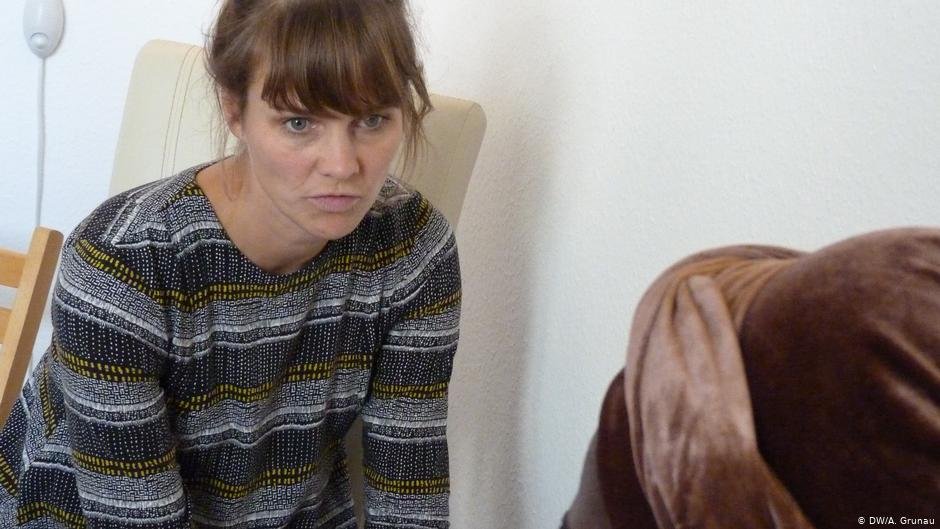 Alimat, another of Maike Jansen’s patients from Benin, hopes the same thing. “It was never my plan to come to Germany,” she says. She herself is a midwife. After her husband died, her family wanted to marry her off, Alimat says. Someone she knew took her papers, including her diploma certificate, and promised to find a suitable job for her in France. But he actually wanted to force her into prostitution. She takes a deep breath: That was a shock!

Two days later Alimat managed to escape: “I asked for help on the street.” Someone phoned her friend in Germany. She organized a ticket to Hamburg. Now Alimat lives with her friend, still without documents. She worries about her son who lives with her parents in Benin. It’s a place dominated by violence, she says. She wants her children to live in peace.

HIV, tears and a fighting spirit

One of the other patients at the clinic took a blood test, and the result showed she was infected with HIV. Gynecologist Teresa Steinmüller says it was a long time before they could get hold of her. She had no money to put credit on her mobile phone. Today she is told the diagnosis. She has to start taking medication straight away to increase the chances of a healthy baby. After the initial shock, she appears to calm down. But then, as she sits in the waiting room, the tears come, and they do not stop. Maike Jansen takes her into the small consulting room where she listens to her worries and calms her down. The clinic’s opening hours officially ended ages ago. 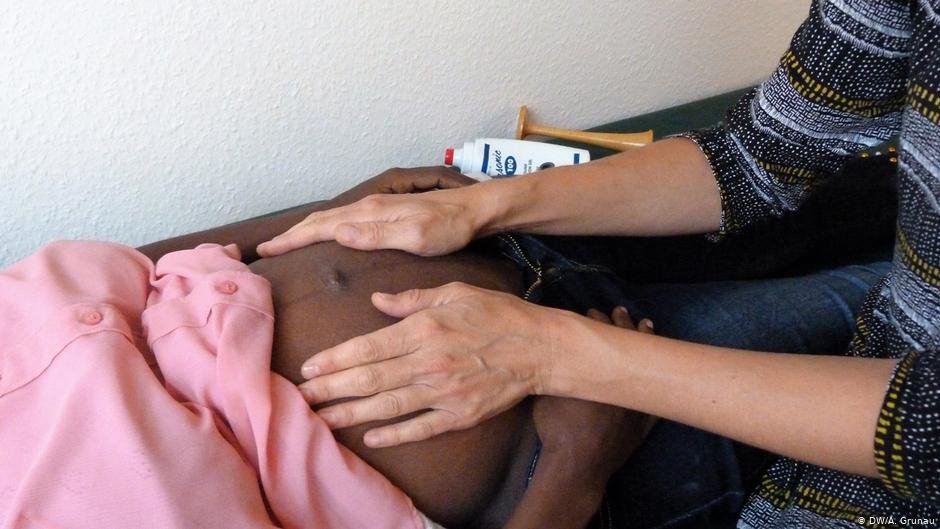 At the end of a working day, Jansen is visibly upset. “So many people cried today.” This week, three emergency cases had to be sent to hospital – women with severe bleeding and complications. Luckily not every day is as intense, the midwife says. After the tears, the pregnant women always manage to smile and recover their fighting spirit. There’s a lesson there for the rest of us, Jansen says.

Mary is determined to take charge of her difficult situation. She tries to put her anxieties aside: “I have a daughter in Africa and I have to look after the baby. This is why I have to fight. I can’t just throw my life away.”

Translated and adapted by Marion MacGregor