As large numbers of displaced people arrived in 2015, some Schengen countries reintroduced border checks. Six are extending controls. That's illegal, EU observers say, and it undermines the idea of freedom of movement.

People and goods can move relatively freely across the internal borders of the 26-nation Schengen Area. The idea is that the agreement — to which 22 EU countries as well as Iceland, Liechtenstein, Norway and Switzerland are party — will boost domestic economies and facilitate human mobility in a way that few parts of the world permit.

Border controls used to be reserved for foreseeable events

Clear rules regulate when and how a Schengen country can temporarily reintroduce checks at its borders. Until recently, these reintroductions were few and far between, usually invoked for foreseeable events, such as major sports competitions or political meetings: Portugal conducted border checks for the 2010 NATO summit in Lisbon, for example, and Denmark did it during the 2009 UN Climate Change Conference in Copenhagen. One announcement by Iceland lists "Participation of MC Hells Angels at the inauguration of the Icelandic Motorcycle club in Reykjavik" as the reason for two days of checks in Iceland in 2007. These kinds of controls last only a few days and are planned far ahead of time.

But, "since September 2015, some countries have started using every legal possibility in the Schengen code to extend border controls," said Yves Pascouau, a senior adviser at the Brussels-based think tank the European Policy Centre (EPC) who holds a doctorate in EU migration policy law. "This is unprecedented."
The chart below shows every time that a Schengen member country has reintroduced border controls since the establishment of the free movement area. The vertical line marks September 2015. When increasing numbers of refugees started arriving in the European Union in 2015, Austria, Germany, Slovenia and Hungary quickly reintroduced controls, citing a "continuous big influx of persons seeking international protection." This was the first time that migration had been mentioned as a reason for reintroducing border controls.

Soon after, six Schengen members reintroduced controls for extended periods. Austria, Germany, Denmark, Sweden and Norway cited migration as a reason. France, as the sixth country, first introduced border checks after the November 2015 attacks in Paris, citing terrorist threats. Now, four years later, all six countries still have controls in place. On November 13, they are scheduled to extend them for another six months. 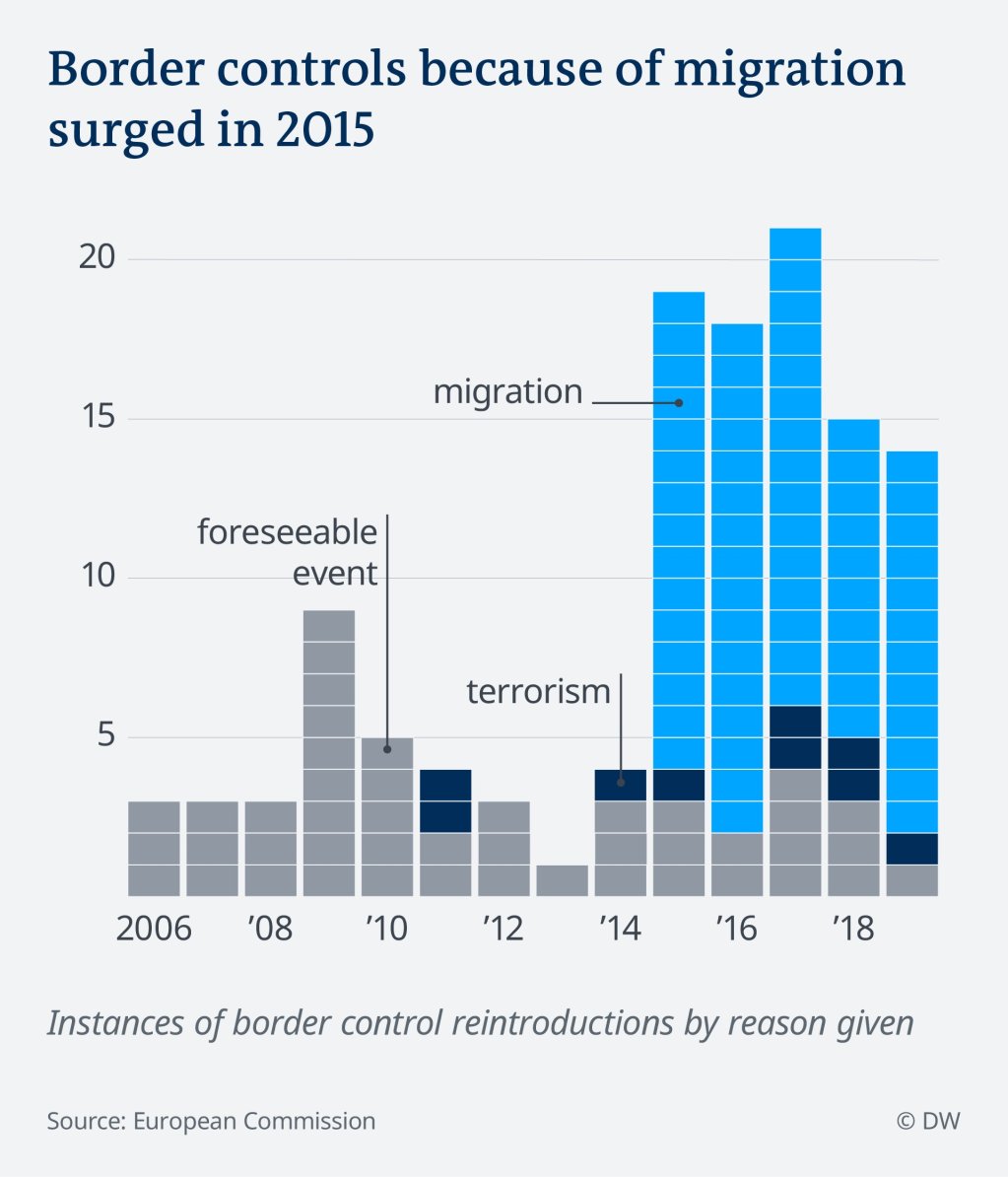 "From 2015 to 2017, there was a legal ground for these controls," Pascouau said, "but since then they have been unfounded."

Meant as a last resort — when a country at the edge of the Schengen Area can't protect its external borders, for example — Article 29 allows member states to reintroduce controls for up to six months at a time, with extensions "no more than three times for a further period of up to six months." That would add up to a maximum total duration of two years. The current controls have been in place for four years. 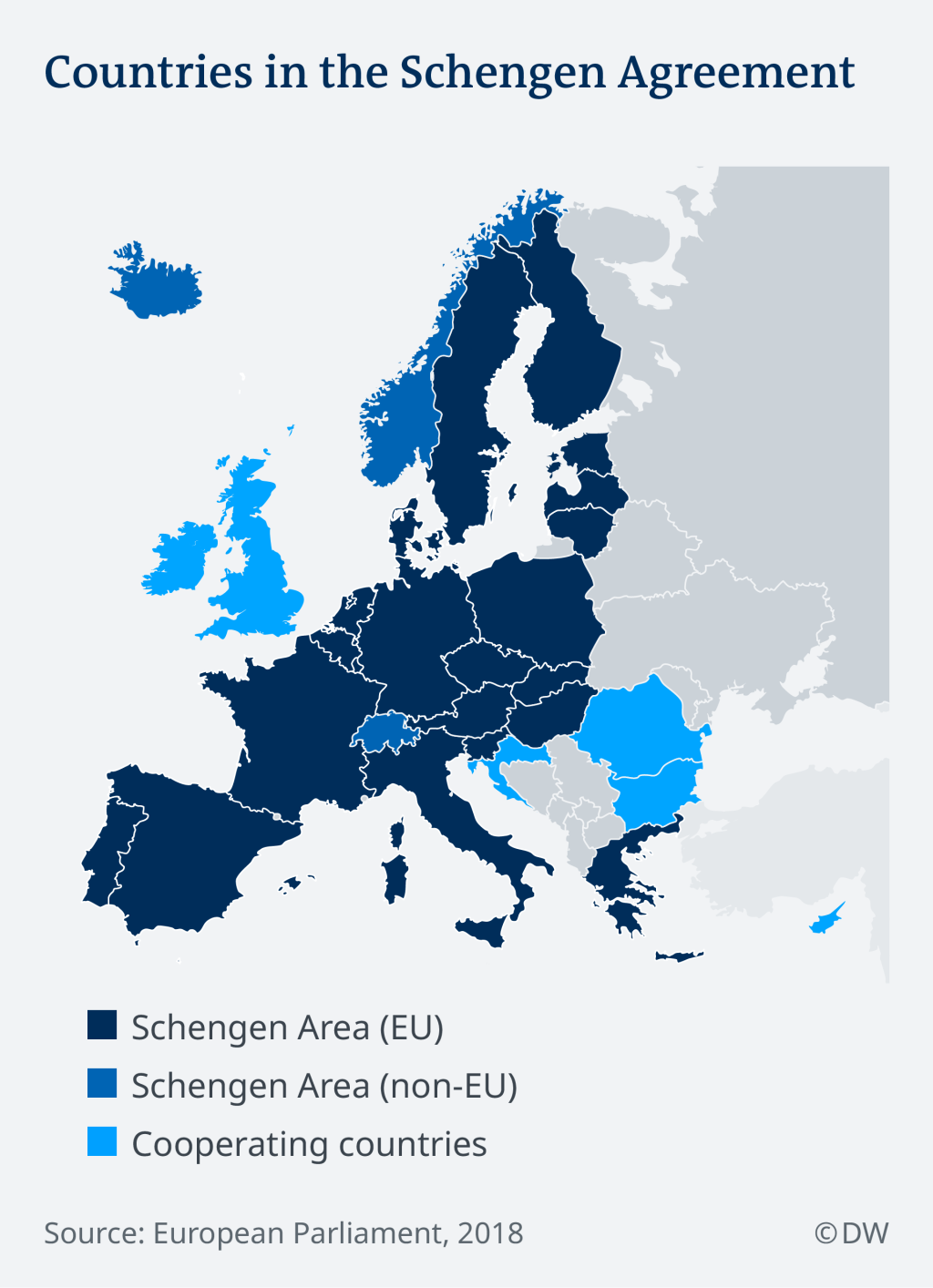 This does not necessarily mean that police check the passport of every person crossing the border. In Germany, for example, only a few crossings with Austria are monitored, and controls around the other borders are carried out more intensively. The Swedish government stopped systematically checking every person crossing the border with Denmark in 2017, switching to targeted controls and automated surveillance systems instead.

There's a specific procedure for invoking Article 29: Member states have to petition EU institutions to recommend border controls. The Council of the European Union, which consists of ministers from each EU country, then issues this recommendation, and the members follow it. That's exactly what happened on May 12, 2016, when the Council recommended that Austria, Denmark, Germany, Sweden and Norway extend their controls for six months.

The reason for this was that investigators had reported security deficiencies at the external Schengen border in Greece. A catalog of measures to be implemented was issued to Greece to remedy the situation. The Council issued such recommendations over the months that followed until, in November 2017, they hit the maximum total duration of controls possible under the current laws.

The countries have repeatedly extended the controls on the basis of national authority, citing the "security situation in Europe and threats resulting from the continuous significant secondary movements." France never received a recommendation from the Council to reintroduce border checks, but has maintained them continuously, citing a "persistent terrorist threat."

"We are in an entirely political situation now, not a legal one, and not one grounded in facts," the EPC's Pascouau said. "Either there would have to be a proper legal assessment of the current situation, or the rules would have to be modified." He said the European Commission or a member state could theoretically investigate the controls and ask the European Court of Justice to settle the matter. But that has not happened yet.

When asked to clarify the legality of the current border checks, a representative from the European Commission referred to Articles 25 and 26 of the Schengen Borders Code, but didn't expand on how these apply. These two articles explain the basic procedure for the reintroduction of border controls: under extraordinary circumstances only, for a period of up to 30 days, extendable up to six months, unless a situation as described in Article 29 takes place.

On September 13, 2015, Germany became the first country to reintroduce controls. Since 2006, the country has had the most overall days with border checks of any Schengen member. A representative from the Interior Ministry, which is responsible for the controls, told DW that officials had determined that "the time limits laid down in the Schengen Borders Code refer to each individual new order for the temporary reintroduction of internal border controls." That would mean that the time limits set in the Schengen laws would reset with every six-month extension.

Members of the European Parliament do not agree with this interpretation. "We believe it is a political decision and not legal," said MEP Tanja Fajon, who authored the Parliament's position report on border controls. "The Schengen Border Code for us is clear. There is an absolute upper limit of two years, to which you can only arrive at after having a Schengen evaluation proving deficiencies putting the entire Schengen Area at risk. No such conditions apply at the moment, and the period set in Article 29 has expired."

The European Parliament issued an official condemnation of the controls in May 2018. Fajon, a Social Democrat who represents Slovenia, said the checks became an ideological issue. "In the past, any reintroduction of border controls was accompanied with specific measures that needed to be implemented to ease the situation," she said. "Those have all been complied with. We are now in a position to check every person coming in, but the controls are still in place." She said the impression in Parliament is that the European Commission doesn't want to take the member states to court. "It is not in Germany's, France's or the Commission's interest to change the status quo, as they can do what they want and the Commission does not need to act against them," she said.

Pascouau agrees: "Politically, no one could even imagine that the Commission would introduce any action against a country like Germany."

According to Germany's Interior Ministry, the current border controls were ordered for reasons of "migration and security policy." In response to an inquiry by lawmakers from the Left party in June, the ministry cited the "still too high" number of unauthorized entries into Germany, the number of smugglers reported at the border with Austria, the number of asylum applications, and the "considerable migration potential on the Eastern Mediterranean route" as relevant factors.

According to statistics from the federal police, the number of people attempting to enter Germany has fallen to pre-2014 levels. Slightly more than 30,000 illegal entries were registered in Germany in 2018 — below the level of 2014 (37,700). The number of asylum applications registered by the German Federal Office for Migration and Refugees have dropped similarly as well, as has the number of smugglers as estimated by the federal police.

Since 2015, a range of measures have been implemented to fortify the EU's external borders: The European Border and Coast Guard Agency, also known as Frontex, was established in 2016, the bloc signed a refugee deal with Turkey in 2016 to take pressure off of Greece, and smarter information systems, as well as other reinforcement and support mechanisms, have been put in place on the Schengen perimeter.

All of this has caused a drop in illegal crossings at the EU's external borders as well. The Eastern Mediterranean route, for example, which Germany had cited as a cause for concern, saw 56,561 irregular crossings in 2018. That is a steep decline from the peak of 800,000 in 2015, and more comparable to the levels seen in 2010 or 2011. 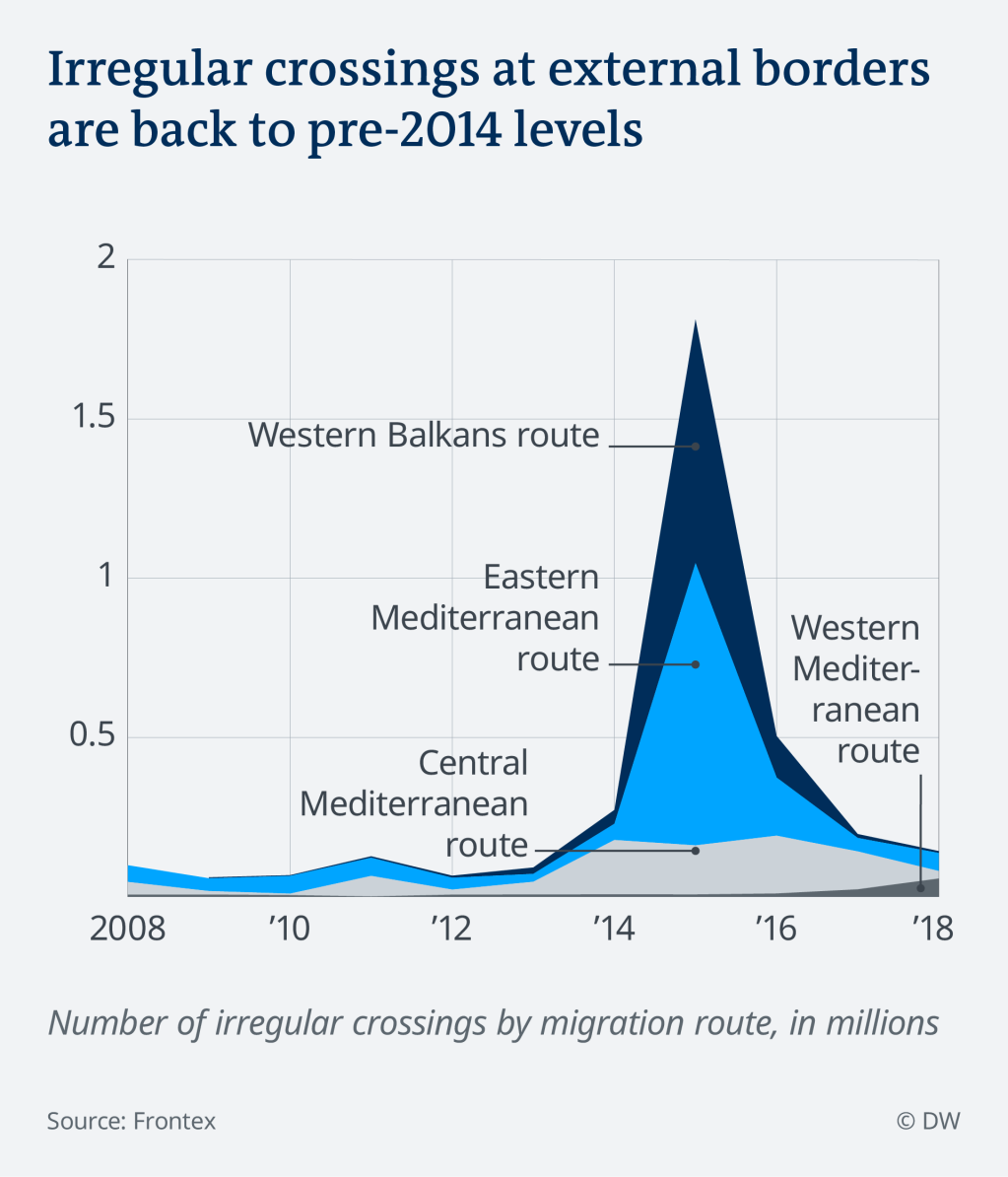 Whether the current situation still warrants internal border controls is a matter of political debate. But, no matter the stance, the question of how the Schengen rules should move forward remains. There are efforts to revise the rules in light of the challenges of the past years. In September 2017, the European Commission proposed an amendment to the Schengen Borders Code that would allow for, among other things, extending the maximum possible duration of controls to three years. The European Parliament, in contrast, voted to tighten the already-existing rules so that the absolute maximum would be one year and any extension beyond six months would require assessment by the Commission.

No agreement in sight

At the moment, it seems like there is no common ground. "The negotiations have stalled," the MEP Fajon said. "The new Commission might even withdraw the proposal on the table, which we believe it would be a really bad sign. The future of the Schengen Area is grim."