Every asylum seeker deserves the chance to prove his or her right to protection. That’s the philosophy behind Asylos, a group of volunteers based around the world who do research to fill in critical gaps in information about asylum seekers' claims. InfoMigrants spoke to Asylos about their work.

For refugees applying for asylum, being able to present evidence to prove that they have been persecuted can make or break a case -- it can mean the difference between being granted protection and being rejected.

But researching the information about an asylum seeker's claim often requires extensive expertise – knowledge of local languages, experience in researching complex human rights issues and access to expert evidence in the countries of origin.
For many refugees and their lawyers, accessing this kind of evidence can be difficult or impossible. They also simply don't have time to do thorough research. This is where Asylos steps in.
What is Asylos?
Asylos is a global network of volunteers who help lawyers and asylum case workers by researching an individual asylum seeker’s country of origin.
Many countries in Europe have their own research centers that produce research on demand for immigration decision authorities. These are called Country of Origin Information Units. They also produce thematic reports on individual countries. But they are limited in their resources, and can be influenced by political pressure not to allow certain nationalities into the country, explains Olivia Baskerville, the network coordinator for Asylos in Brussels.
"A lot of the time, people who have legitimate stories of persecution and suffering in their own country (...) are turned away because their country is designated as 'safe', or because the research hasn't been thorough enough," says Baskerville. "Or it may be that the country that has produced the COI report is saying, for example, 'arranged marriages in Afghanistan aren't really a problem, or women don't experience persecution at the hands of national authorities or the family'."
Who comes to Asylos for help?
Anyone who is helping refugees, asylum seekers or people claiming protection through the refugee status determination procedure can use Asylos' research services. This includes migration NGOs in Europe, refugee councils and legal aid groups, and immigration lawyers.
The lawyers, rather than asylum seekers themselves, deal with Asylos directly. This is because asylum seekers often don't yet know the legal requirements to support their claim before they have consulted a lawyer.
Who does the research and where does the information come from?
Asylos is a diverse network of mostly young researchers spread across 27 countries. So far, the group has produced reports on over 80 countries of origin. Asylos researchers speak at least 26 languages between them. 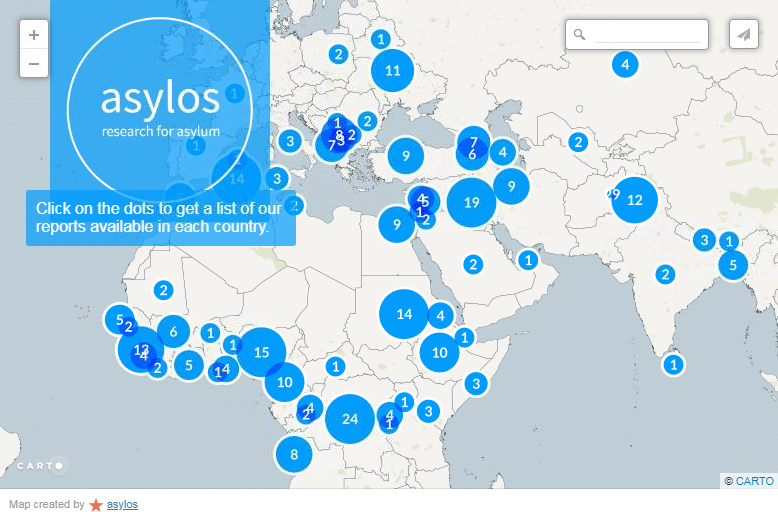 Most of the research is done online and comes from open sources. Asylos doesn't have special access to classified information, but because the researchers are based around the world, they are able to reach into places where other people can't, according to Baskerville.
"We have researchers from Djibouti, Ethiopia, Sudan and Afghanistan as well as South America. We have one researcher who is an expert on LGBTI issues in Senegal and the Gambia. She's completing her PhD on that research, but she spent a couple of years there and goes back regularly, and she has many contacts there."
"We try to get a hold of information that a lawyer just sitting at their desk and doing a basic internet google search would struggle to find," says Baskerville.
What does Asylos produce and how does it help asylum seekers?
Asylos reports are produced in English and French and have been used in 45 countries around the world, from Belgium to Malaysia, the USA, and Israel. In France, where the group has been active for about a decade, asylum authorities are used to receiving Asylos reports. In the UK, they are regularly cited in immigration tribunals as having had an impact on asylum decisions.
Persecution in Afghanistan
"A couple of years ago we received a request from a lawyer representing an Afghan man. He had claimed to be persecuted by the Taliban on the basis of being set to inherit his uncle's land. The Taliban had killed his uncle and taken his uncle's land and threatened to kill him if he didn't leave the country. The authorities (in the European country where he was claiming asylum) were turning down his claim on the basis that it didn't make sense that his inheritance was coming from his uncle. They didn't have any information about inheritance practices in Afghanistan. We produced research ... to show that it made perfect sense, in his particular region of Afghanistan, that one might inherit from one's uncle. That was a logical chain of inheritance in Afghan tribes in this particular region. In this way, that credibility aspect of his claim was covered."
Sometimes, when Asylos researchers go digging, they come up with information that does not tally with the asylum seeker's story. This information is still included in the report, even if it contradicts the client's claim. In this case, the lawyer may decide not to submit the report to the tribunal or court. "As long as we were able to influence the legal arguments so that the client stands the best possible chance, we're fine with that," says Baskerville.
Asylos has around 400 reports on its database. These are separate investigations that have already been completed on countries of origin to support an asylum seeker's case. To read the (anonymized) reports, you have to be a subscriber to the service, in other words, an asylum lawyer, related NGO or case worker.
Some examples of the subjects of investigation have included:
It's hard to know exactly how many people Asylos has helped, especially since asylum procedures can take years. Feedback from clients (probably reflecting a positive bias) shows that 74% of claims in which Asylos reports were presented or used in evidence were concluded with the applicant's being granted some form of protection.
Narrowing down risk in Namibia
"We received a request on the availability and accessibility of treatment for a mental health disorder, and the availability and accessibility of treatment for HIV, and economic opportunities, and the prevalence of child labor and the prevalence of human trafficking in Namibia: That was all one request. We got the lawyer to narrow down the questions to what the client was being rejected on the basis of, and then addressed that in relation to the client's specific risk profile."
As well as doing case-based research, Asylos produces strategic reports aimed at filling particular gaps in country of origin information. One recent report is on Albania and relates to trafficked boys and young men. Another report looks at the situation of young male "westernized" returnees to Kabul in Afghanistan. This was intended to help lawyers representing young men who had spent their teenage years in Europe but were faced with being returned to Kabul when they turned 18. These strategic reports can be downloaded from the Asylos website.
Contacting Asylos
If you are helping someone with their asylum application or claim for refugee protection and would like support from Asylos, you can submit a research request at www.asylos.eu