A floral workshop has been set up in the French capital to help female refugees and other vulnerable women win back their confidence by teaching them the delicate art of flower arrangement. The French charity Du Pain & des Roses (Bread & Roses) runs the workshop once a week in an accommodation center in eastern Paris. For the women attending the workshop, the classes offer a breath of fresh air, and sometimes, the start of a new career. InfoMigrants reports.

"It makes me happy to use my hands and work with flowers. I love this feeling," Ami* gushes as she sorts the chrysanthemums, eucalyptus leaves and carrot flowers that are spread out in front of her on a table. All in all, there are 10 women taking part in today's floral conception workshop, which is held at the Merice accommodation and social rehabilitation center (CHRS) in Paris' 11th arrondissement.

Three years ago, 38-year-old Ami had never seen such a variety of flowers. In her native Ivory Coast, these type of flowers are either extremely rare, or don't grow at all.

Ami left her homeland in 2016 after being forced to marry a man against her will. Her husband then wanted both her and her daughter to undergo female circumcision. "I refused, and so he picked up a knife and threatened me," Ami recounts, adding that she is still waiting for a decision on her asylum application.

Ami says the floral decoration workshop offers her a breath of fresh air and helps her think about something else for a little while. The same goes for Matoumona*, a 32-year-old woman from the Democratic Republic of Congo who was forced to marry her brother-in-law.

Matoumona much prefers talking about flowers and the training she is getting than her traumatic past. "Before this, I didn't know how to make flowers stand out, or how to prepare them to make flower arrangements. But now I do," she says with pride in her voice.

Everyone taking part in the workshop is female, and has suffered violence of some sort during their lives. 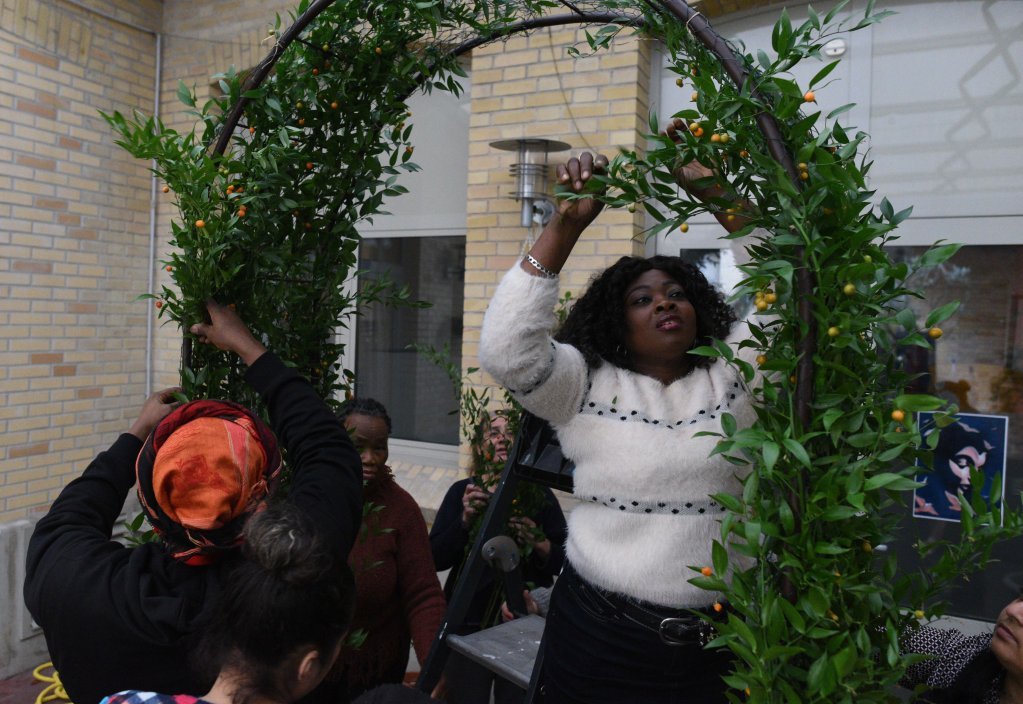 The workshop doesn't just teach the women new skills, it also works as a confidence booster and helps the women disconnect from the list of administrative meetings and doctors' appointments they have to keep up with.

"They get to showcase what they know and what they've learned, while also being required to stick to a weekly schedule. It puts some structure into their lives," Mustapha, one of the workshop leaders, says. "Sometimes they talk about their experiences and motivate each other. It's a really nice way to learn how to work in a team."

"It's a great atmosphere, we have a lot of fun together," 61-year-old Tarya* explains. Tarya is from Cameroon and has lived in France for 20 years, but three years ago she lost her French residence permit. Thanks to the workshop, she is able to think about something other than her precarious situation for a few hours. While the rest of the team start working on the floral arch, Tarya strikes a pose in front of the cameras.

"Look at the star!" other women in the class say.

Other participants in the workshop meanwhile reminisce about their countries of origin: "Many of them come from the countryside or are used to working with their hands," Mustapha says. 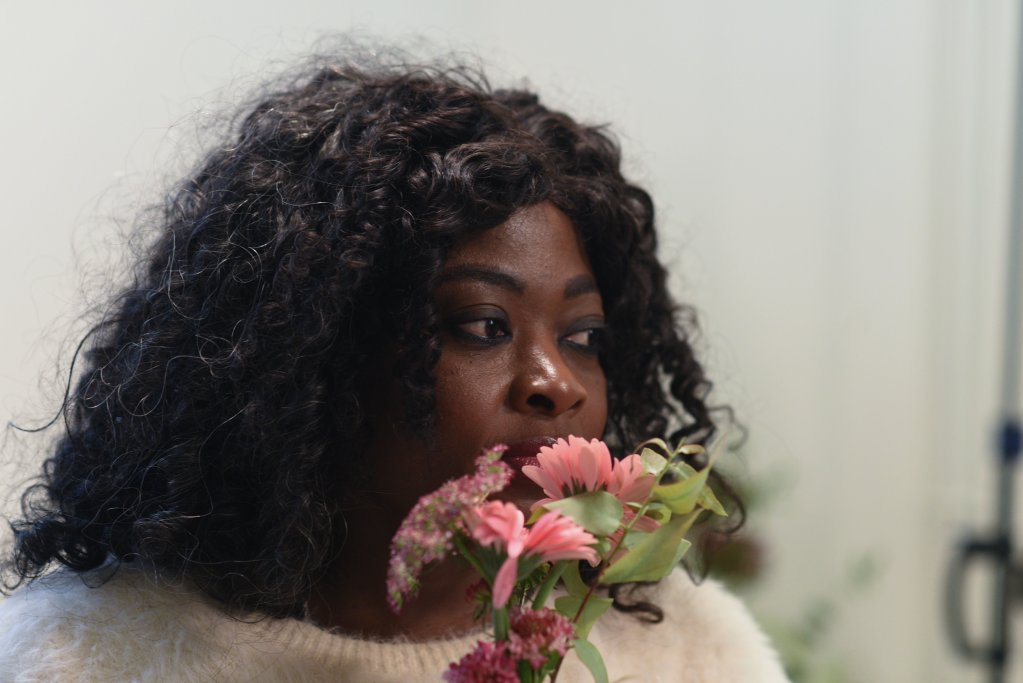 Using floral art as an outlet

Every Tuesday, these women are taught the ABC of floral arrangement. They have already learned how to create a bouquets and floral center pieces, and now they are being taught how to make a floral arch. "They're great decorations for events, particularly weddings," Laetitia, a florist who works for Du Pain & des Roses, explains as the participants attentively listen to her speak.

This is the first time that the group will work on a project together. It's a way for them to get to know each other, despite their various and often eclectic backgrounds. "Some of the women are in exile, while others have lived with addictions, been the victims of domestic violence or lived on the streets," Mustapha highlights.

"Whatever their background, the common factor among these women is that they have all lost a part of their lives."

Working outside on the patio, the women are in full swing decorating the center's high metal structure. "It's up to you to decide how the colors are distributed to make it look nice," Laetitia says, as everyone gets busy with their tasks: one of the women climbs the ladder as others attach flowers to the foliage or cut flower stems. After just six sessions, these women are already highly skilled at the art of floral decoration. 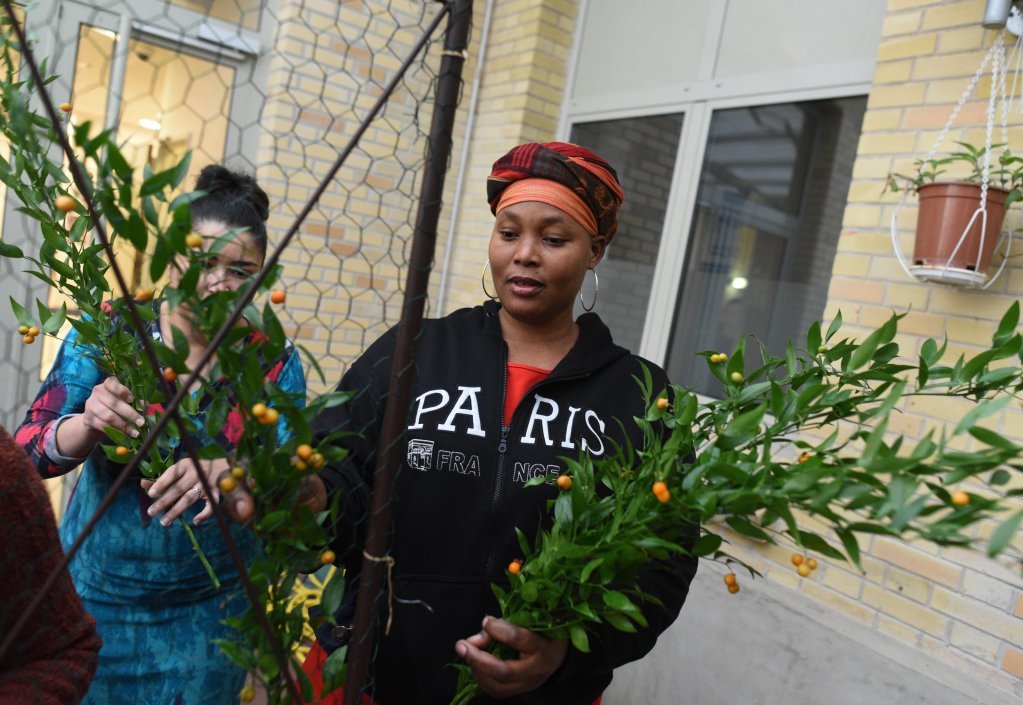 Although some primarily view the workshop as a hobby, such as Tarya from Cameroon, others see it as a steppingstone for a future career in the field: "I've been wanting to be a florist since I was a child. I saw lots of flowers during ceremonies and weddings in my country, but I never got the opportunity to get training there," one of the woman says.

To encourage and motivate the participants, the women will be awarded a certificate at the end of their 7-week course. Although the certificate is not officially recognized, it helps the women believe in themselves again.

"We don't just want to hold a workshop and then disappear from their lives. We don't want it to end there," Marie Reverchons, the director of the association, says. To that end, Du Pain & des Roses is now planning to hand a former workshop participant - a refugee from Ecuador - a permanent, full-time contract within the next few months. 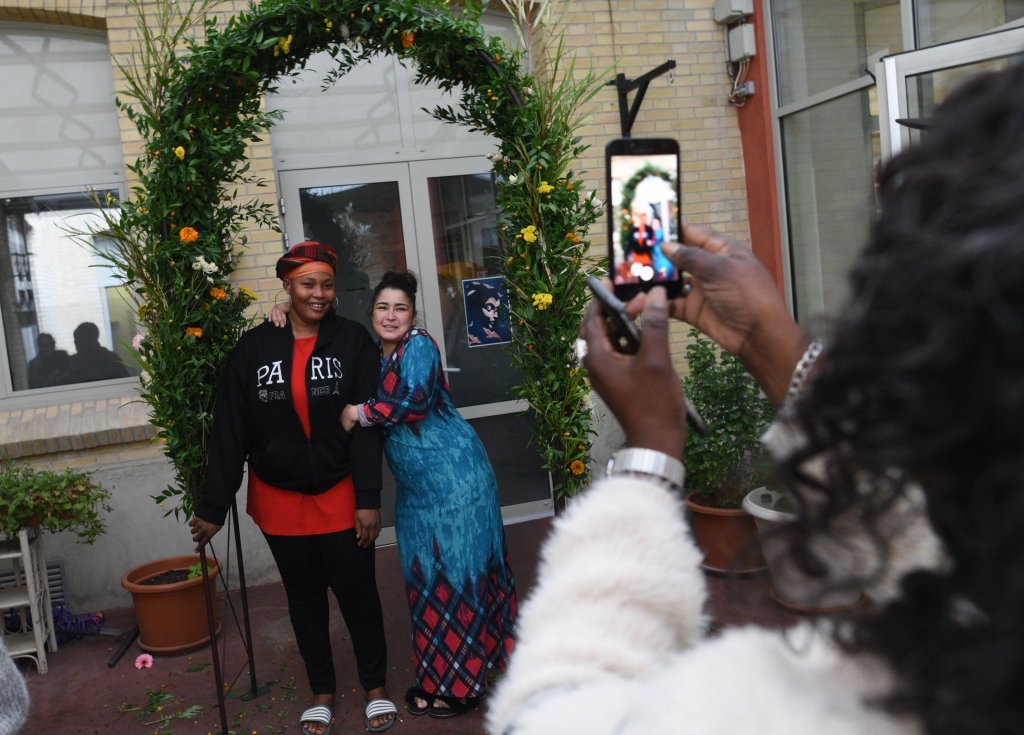