Since the beginning of the so-called refugee crisis, Europe has been busy taking care of matters at home. Not much attention is paid to around 16 million refugees on the African continent. The UNHCR reported recently that there are more than ever before. Their situation is often catastrophic, as the example of Burundian refugees in Tanzania shows. A report by Linda Staude for ARD.

Carine is cooking lunch for her family in a small, skewed kitchen made out of clay bricks. It’s a luxury. Her husband built this rickety construction with his own hands. Some corn mush and a few peas are cooking in dented pots. It’s the same food almost every day. “Peas and corn starch are all we have. Sometimes we run out after five days already“, Michael laments. “Then we have to wait another four days for the next distribution of food rations. So we can only wait until we and our children can have food again.”

The 32-year old came to Tanzania for safety reasons, together with his wife, their four children and their grandfather. That was in 2015, shortly after the failed coup against Burundian president Pierre Nkunrunziza. Ten thousand Burundians fled the country back then, many under terrible conditions.
“There is a spot in this place called Kagunga, a small lake shore village, three hours by ship from Kagunga ”, says Amah Assiama of the UN Refugee Agency UNHCR. “The estimated number of refugees there was 60.000. They had nothing there. They were hosted by the local population who had nothing themselves. Until there was an outbreak of Cholera.” People started to fall ill with fever and diarrhea.

On an age-old German marine ship from the First World War, which is normally used as a tourist attraction on the lake, the UNHCR transported the sick to Nyarugusu. They did this 300 passengers at a time, for two weeks. “We achieved our objective of saving lives, including the emergency evacuation from Kagunga”, says Assiama. “But we still have great challenges in the camp.”

Michel’s family is housed in a tent. The word “UNHCR” is written in big blue letters on the tarpaulin that was once a white color. After two years of pouring rain and glistening sunlight, the tent is not in its best condition anymore. There’s a hole through which water enters. “Next to the tent are the toilets that many people have to share. They don’t accommodate many people, that’s why they are dirty and hard to keep clean”, Michel explains. “We are seven people in a small room. It’s not easy.“ 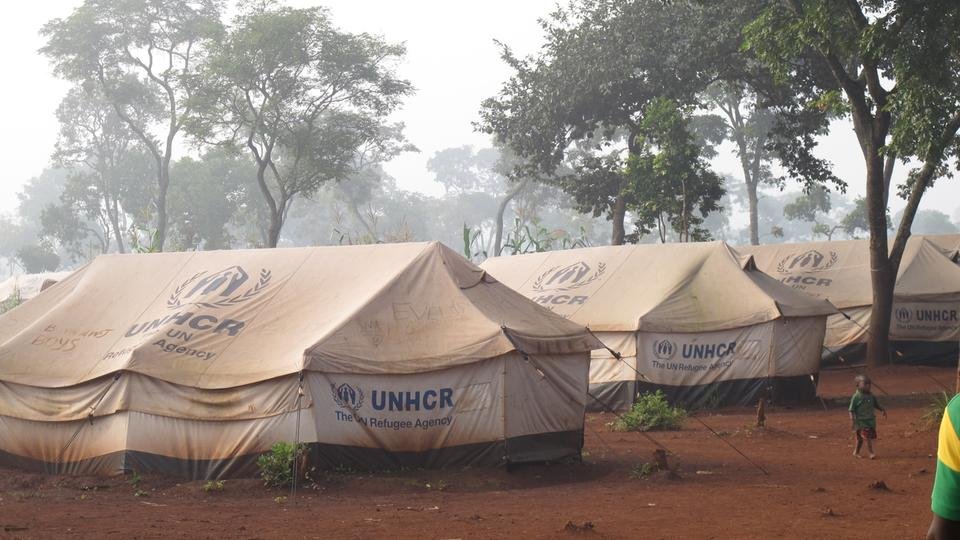 The tents are crammed next to one another. Nyarugusu and the two other camps on the Western border of Tanzania are overcrowded. More than 200.000 Burundian refugees are living there and every day, about 300 new migrants arrive. A fourth camp has been applied for, but it hasn’t been approved yet. There’s a lack of the most basic necessities.
„I don’t even know where to start. We have to do everything”, Amah Assiama says. The UNHCR needs to replace the shabby tents, the cooking stoves, the lamps, the water containers. There are not enough hospitals, medication is missing and the only schools are makeshift ones beneath plastic canvas covers.

Doctors without Borders warns of "disaster"

Last October, the World Food Programme WFP announced that food rations would have to be reduced to 60 percent of the recommended amount, because of a lack of funding. A last minute donation prevented this from happening. But the risk remains. “We have a lot of undernourished children, who need to be hospitalized ”, a volunteer from Doctors without Borders explains. “We are totally overcrowded. We need a solution to increase our capacities.”

Months ago, the help organization had warned that Tanzania was seeing one of the biggest refugee crises in Africa. “Doctors without Borders is stepping up as required in health”, country coordinator David Nash says. “But the problems with water and shelter remain. If those things are not worked out, with more and more refugees coming, it will be a disaster. The world needs to step in and do something about this before a disaster happens.”

Donations do not suffice
For now, it does not look like it’s going to change. The UNHCR had calculated that 180 million dollars in funding was needed for the crisis in Burundi. The donation money just covered half of this amount. “I would not say that the international community is not giving enough”, UNHCR’s Assiama says. “But our emergency, unfortunately, has not captured the attention that other emergencies are receiving. That’s why it has been very difficult here.”
The situation in Tanzania is in no way unique. In response to the crisis in the Central African Republic, only a fifth of the needed money arrived. The refugees in Kenya were in need of 170 million Dollars. The Dadaab camp has only been making headlines again since Kenya announced plans to close it.

„The rich countries don’t want to accept resettled refugees any longer. So everybody is stuck in the camps”, Ben Rawlence criticizes. He’s the author of “City of Thorns”, a book about Somalian refugees at Dadaab. “Dadaab is one city – there are many of them. There are around 14 million protracted refugees stuck in camps. So the million who’ve come to Europe recently is just a drop in the ocean.”

Like in Somalia, many of the forgotten crises in Africa are at risk of turning into permanent conflict – refugee spots will turn into permanent camps. As for Frank, who has lost his whole family in the Burundi conflict. “It’s true that life in the camp is miserable”, he says. “But a bad life is better than death. I cannot go back to Burundi. I would rather die somewhere else than in a place where my parents and siblings had to shed their blood.”

This report was adapted by DW from the German report "Vergessene Flüchtlinge in Afrika" by Linda Staude, produced for the Hessischer Rundfunk (HR) -special dossier: „Milliarden gegen Migration – Deutschlands Flüchtlingspolitik in Afrika“