French police said they removed around 600 Tibetan asylum seekers from a makeshift camp near Paris on Tuesday.

The police loaded people on to buses early on Tuesday morning as the authorities cleared the tents and other shelters which had been created by the Tibetans. Families with children were taken to one center and men and women were loaded on to separate buses, stated AFP.

The local prefecture in Yvelines tweeted pictures from the operation on Tuesday, saying they were offering shelter to 600 people. They said the operation was carried out by state authorities with the help of aid organizations and volunteers.

The deputy-prefect said that those in the camp were being distributed across several towns in the region as well as Nanterre and Essonne. Over the course of 2019 a number of Tibetan migrant camps housing a few hundred migrants at a time have sprung up near Paris. Several times the police have evacuated the camps but new ones have sprung up in their place.

Since 2017, about 800 Tibetans have already been found shelters in this manner. The cost of new accommodation for these people is being shared between the Red Cross, the Catholic emergency aid association and a charity called l'association Equalis-ACR-La Rose des vents, reported InfoMigrants French.

Tibetans gravitate to this area

This latest camp on the edge of a forest near Archeres, about 30 kilometers north-west of the French capital, sprang up in August 2019 following the evacuation of several other camps reported the French news agency AFP. The area has been a gathering place for Tibetans since around 2010; according to AFP, while a local aid association offered help with asylum requests as well as meals and showers.

It is thought around 8,000 Tibetans live in France, that’s according to a Tibet specialist Francoise Robin at France’s National Institute of Eastern Languages and Civilization.

In May 2019 the French international broadcaster RFI reported on another camp in a nearby district of Conflans. According to the broadcaster, that camp also housed “over two hundred Tibetan asylum seekers.” When that camp was evacuated the plan was to rehouse the migrants “but a shortage of beds in state-run hostels and a lack of host families means that several will remain homeless.”

According to reports the camps appear to have sprung up in woodlands and are partially hidden. When RFI visited in May, most of the inhabitants “were afraid to be interviewed, fearing both reprisals from Chinese authorities that have banned the practice of Buddhism in Tibet, and the French government they hope will grant them political asylum.”

One man, Tashi, a pseudonym to protect his identity, agreed to talk. He said that his arrival in France had been “difficult.” He explained how he had slept in a train station for a couple of weeks until a stranger gave him some blankets. Later, Tashi recounts, he met a Tibetan “who gave me some money for a train ticket to get to the camp in Conflans” where he had been for two months when he was interviewed for RFI.

Tashi claims his parents were put in prison by the Chinese authorities because they had heard that he had “run away.” This made him cry, he said. However, practicing Buddhism has helped calm him and keep him strong.

The organization Pierre Blanche has been helping Tibetans in the area. The director of Pierre Blanche's barge "Je sers" (I serve), Hugues Fresneau, said that the barge was well-known in Dharamsala where many Tibetan exiles live in northern India. He said the director of his organization had even gone to meet the Dalai Lama once because his association had become so linked to helping Tibetans. But even Fresneau said that their organization had "reached saturation." "These people are completely lost," he said.

Father Protais, a Congolese priest who works as a volunteer with the organization explained that they offer French courses and meals for Tibetans in order to help them integrate and survive until their asylum claims have been processed. He said that he was helping Tibetans because they were not able to practice their own religion, Buddhism, openly in their country; if they did they risked being arrested and imprisoned.

“They are looking for freedom and to be able to live,” Father Protais concluded. 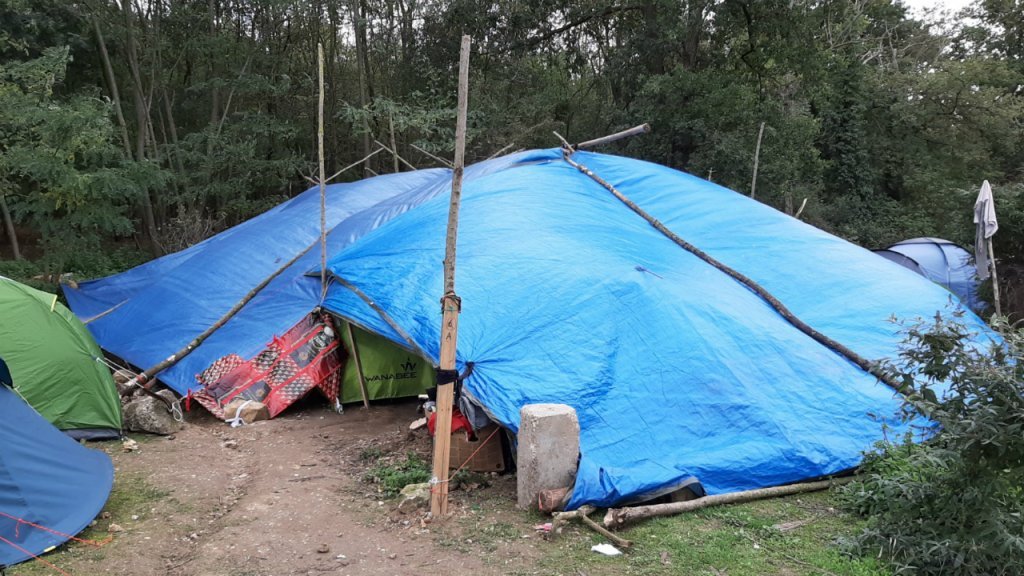 The online magazine Tibetan Journal wrote in June 2019 that many of those who had been evacuated from makeshift camps by the French authorities had been “stranded” because of a lack of places in the designated rehousing projects.

The mayor of Acheres told InfoMigrants France that the operation needed to take place because "it is unacceptable to leave people in these kinds of conditions." He noted that the number of Tibetans fleeing to France has been increasing every year. "We need to cut the smuggling routes," he said but until we do that "we need to give these people a dignified welcome," and provide them with humane conditions in which to live.