Black Vests: Fighting for the rights of undocumented migrants in France

Over the last year, the so-called Gilets Noirs - or Black Vests - have been holding demonstrations in France to bring the rights of undocumented migrants to public attention. But who are they?

On July 12, 2019, people belonging to the Black Vest ("Gilets Noirs") movement went to the heart of the French state and peacefully occupied the Panthéon. Like the "Gilets Jaunes" (Yellow Vests) movement, they are protesting against the overall state of affairs in France.

For the black vests, however, this is particularly in reference to their status which renders them paperless, unable to officially work or live in a country, which they say is becoming increasingly hostile to foreigners and is not upholding the principles of liberty, equality and brotherhood on which France was founded.

In a video from Le Media TV, the Black Vests can be seen streaming into the building which has become known as 'the temple of the nation' as it hosts the remains of French luminaries. According to France's national monuments site it is "the last resting place for the great writers, scientists, generals, churchmen and politicians who have made the history of France."
Diakité, a member of the pro-migrant collective La Chapelle Debout, which supports the Black Vest movement, says in the video that "we are here to reclaim our rights. This is the only means we have. We are not violent. We have been carrying out these demonstrations for months now. […] We are ready to raise 1,000 people [to fight for our rights]."

According to a statement on the "Gilets Noirs" Twitter feed from June 2019, the movement is "the biggest undocumented migrant movement in France." They say they began protesting in November 2018 at the museum of immigration. At the time they claim they drew between 300 and 400 people during protests. Their numbers grew, according to the statement, until they reached more than 1,500 in January 2019.

Negotiations with the police

After staging a sit-in at the Panthéon the French police are seen to walk past the columns inside the building and announcing on a megaphone: "Ladies and Gentlemen, we ask that you leave the Panthéon."

"This is a group action," one of the organizers heard to be saying through another megaphone. "We decide as a group what we will do." A video subtitle then says that "after negotiations, the black vests decided to leave the building."

They are seen pouring out of a side door, some with their fists still raised and chanting: "Black vests, Black vests. What do we want? Papers [registration papers]! Who for? For everyone!" 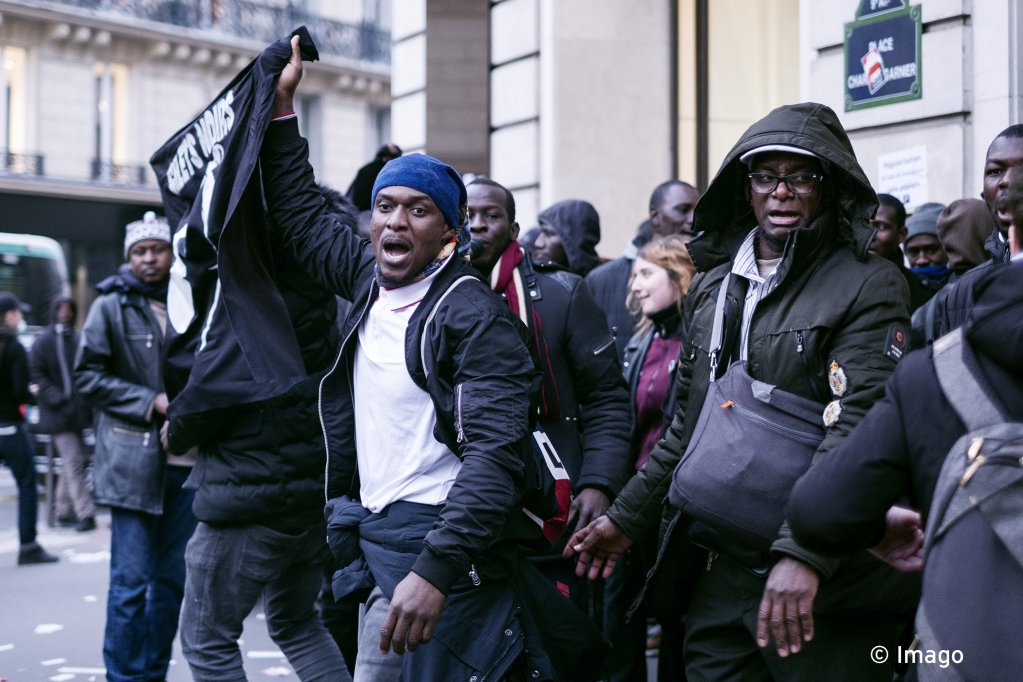 A little while later, there are scuffles between the police and some Black Vests. Diakité is interviewed again explaining that the police didn't keep their word and started asking people partaking in the demo to show identity cards.

"None of us have papers," he says calmly. "That's why we were occupying the building." He conclude with the words, "we are men of our words, but the police are not."

'Justice is nowhere, the police are everywhere'

The video then shows Black Vests retreating; "get back get back," someone shouts as people turn and run. A group of police officers dressed in riot gear appear to be pressing towards them. It is unclear how this escalation started. A few of the protesters are dragged along the ground by police officers towards police vans.

"Justice is nowhere, the police are everywhere," chant the protesters.

Another demonstrator is walked towards a police van, his hands behind his back. The video states that the police arrested 36 Black Vests protesters, 16 of which were taken to a center of administrative detention (known as CRA). It ends by saying that when the report was published on July 16, most of those 16 demonstrators had been released.


The popular Yellow Vests protest movement came to prominence in November 2018 when they brought France to a standstill holding demonstrations right across the country. The Black Vests are hoping to gain as much attention. They have gradually grown over the course of 2019, and have held several demonstrations and sit-ins in order to bring the rights of undocumented migrants to public attention.

'Stop deportations'
In May 2019, InfoMigrants Francais published a story about the first big demonstration held by the Black Vests. Between 200 and 500 undocumented migrants demonstrated at Paris' Roissy Charles-de-Gaulle airport on May 19.

The group, supported by La Chapelle Debout, occupied airport terminal 2F for more than two hours. On this occasion, they wanted to denounce the role of France's national carrier, Air France, in deportations.

Airport Roissy Charles-de-Gaulle is situated close to one of the CRAs (Mesnil-Amelot), which is the biggest in France, according to the French-language InfoMigrants Francais platform "This place [the airport] is first and foremost a border. A border without a wall or barbed wire," said the press release issued by the Black Vests on the day.

'Papers for everyone now'
The Black Vests continued with further demos: in June and December 2019, they protested against French multinational catering conglomerate Elior, which according to the group exploits undocumented migrants. In June they marched to Elior's offices in Paris, and in December they took their protest to a Nespresso shop, (one of Elior's clients) also in Paris.

Open Democracy wrote in June 2019 that Elior "has over 100,000 employees across 15 countries." When the Black Vests occupied the Elior office back in June they accused the company of "withholding wages from undocumented workers, and holding workers' precarious migration status over their heads – if they complain about their working conditions, they will get handed over to the police." 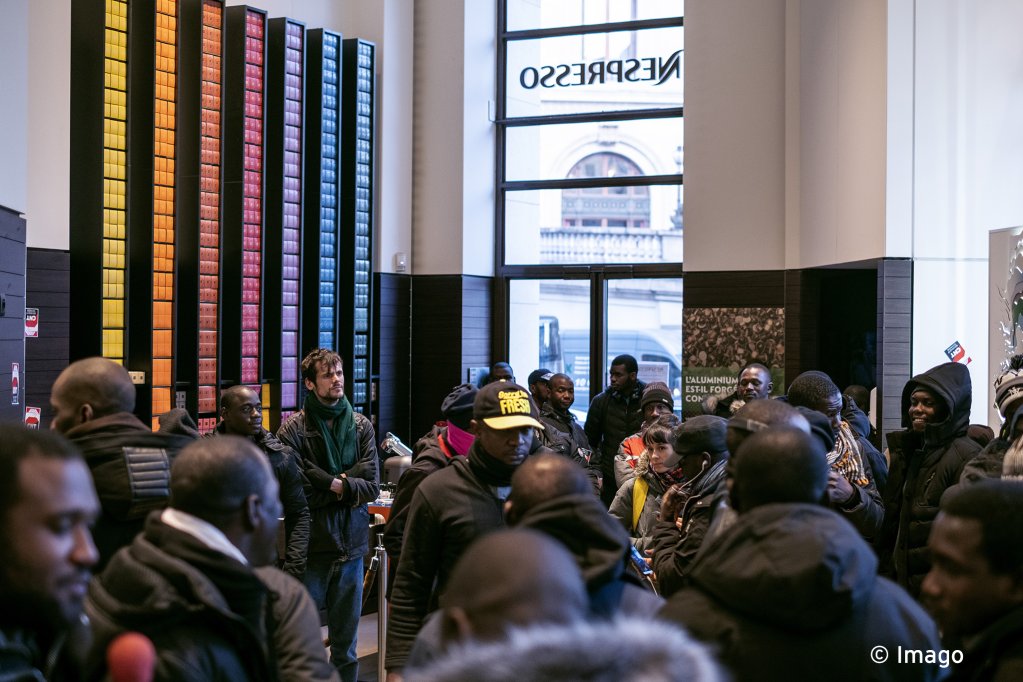 In a statement on their Twitter page, the Gilets Noirs said that they felt like "merchandise for companies." They stated that if they were to be given papers, the companies would "lose their business."

Furthermore, wrote The New Internationalist, the Black Vests say that Elior provides cleaning and services contracts to "several French detention centers," meaning that "migrants clean the very courts, detention facilities, and airports in which they are judged, detained and deported."

"We call on all the forces in France, in Europe and elsewhere to support this campaign against fear and shame. We are for equality, dignity and justice and a concrete expression of that by granting papers to everyone."

The #GiletsNoirs - a militant collective of undocumented migrants in France - are currently occupying a Nespresso store in Paris.

They claim that the coffee chain works with Elior - a cleaning company accused by the @gilets_noirs of exploiting migrants. pic.twitter.com/EJi2WhC5Gl

In June 2019, some of those forces answered. A number of French public personalities and academics, including the actresses Emmanuelle Béart and Juliette Binoche, signed an open letter in support of the Black Vests, expressing their solidarity with the movement and showing their opposition to the government's tough new policies.
''Unlawful arrest'
On December 4, Le Média TV released another video about Diakité, who earlier had spoken during the Panthéon occupation. He was arrested again, this time for political motives, according to the video. "Persecuted simply for bearing witness," read the tweet.

"My name is Diakité, I am from Mali and I have been living in France since 2013," he says on video, which also states that after the video from the protest at the Panthéon was released, Diakité was arrested and held for five days.

"Everything a migrant does, he does underground," explains Diakité. "A migrant has to hide himself because he never knows when he might meet a racist policeman. He has to hide day and night."

Diakité was arrested on November 27, according to the video. "I left my house, which is about two minutes away from a metro stop. Just as I got to the entrance to the metro station, there were non-uniformed policemen waiting for me. They told me they had followed me." 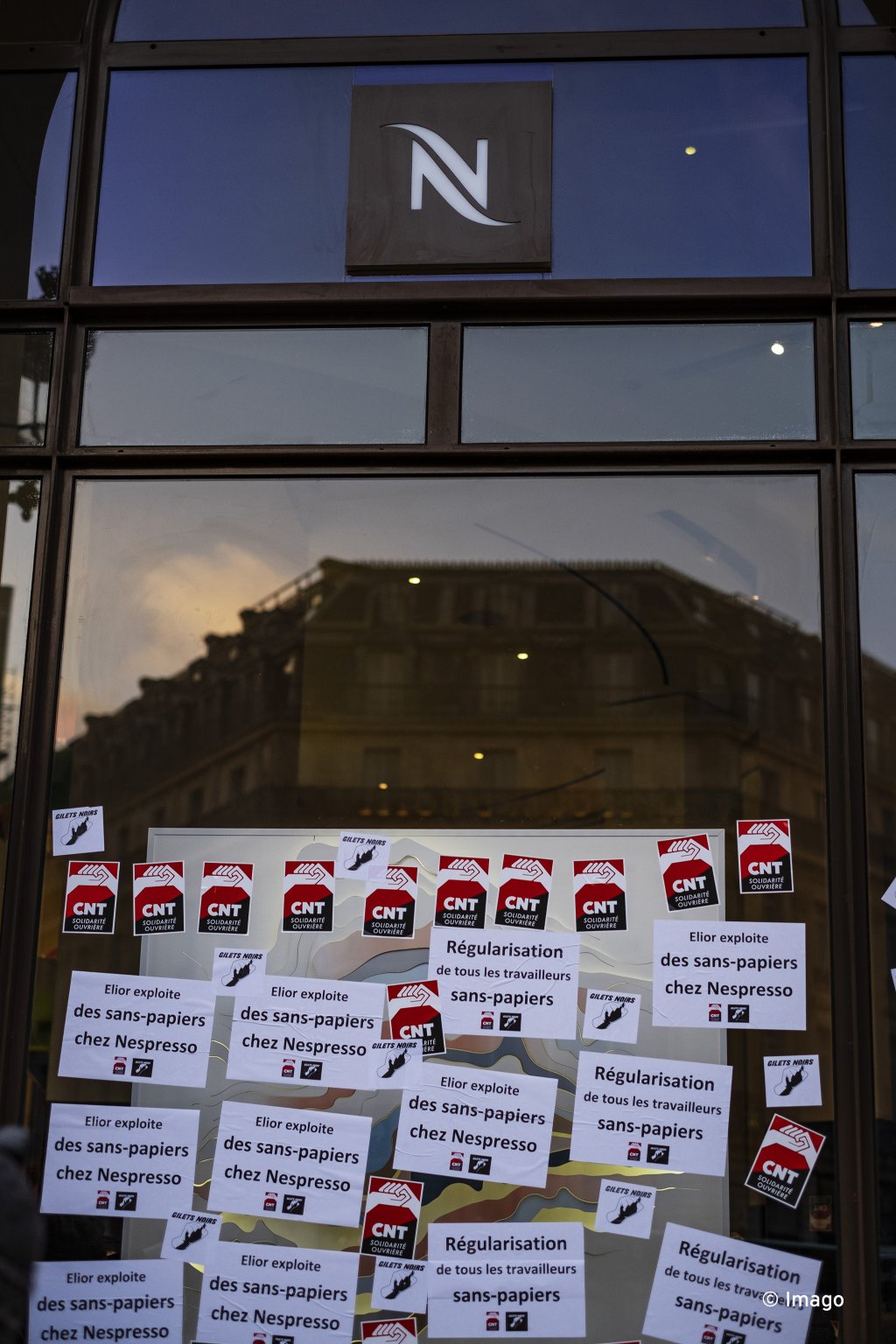 On the telephone, Diakité tells the interviewer that "being an undocumented migrant is not a crime. We have never committed a crime. We just want to stand up for our rights. But the state doesn't want that, they want us to remain in this modern servitude."

"Diakité's arrest was ruled 'illegal' and he was freed December 2," concludes the video.

"Our aim," says Diakité, who estimates that there are at least 1,500 migrants in their movement, "is to regain our dignity. To escape from this constant fear."

'I can't just sit by and do nothing'

Diakité accuses the French state of trying to intimidate the movement in hopes of stopping them from protesting. He admits it is difficult to keep protesting and pushing against the state but he thinks it is "harder to sit by and do nothing."

"We are together. The struggle continues…," the Black Vests tweeted on December 6. According to The New Internationalist article, France detains "the most number of undocumented migrants in Europe." According to the latest French government figures, published in June 2019 (and which refer to 2018), the numbers of those forced to leave France were on the rise.

There were 15,677 cases of deportation across the whole of 2018. Provisional figures published for the number of some form of residence permit (including temporary stays) granted for various different reasons amounted to 255,956, a rise of 3.4% on 2017. The number of those receiving residency permits on humanitarian grounds stood provisionally at 33,981. Only 25,222 people received permanent residency in France in 2018.

The New Internationalist writes that the group fears that with the new proposals on migration law, which were introduced to parliament in November 2019, the length of detention could be extended, and the overall climate for undocumented migrants might deteriorate.
"France cannot host everyone if it wants to host them well," said French President Emmanuel Macron, confirming that he would be taking a tougher line on immigration. 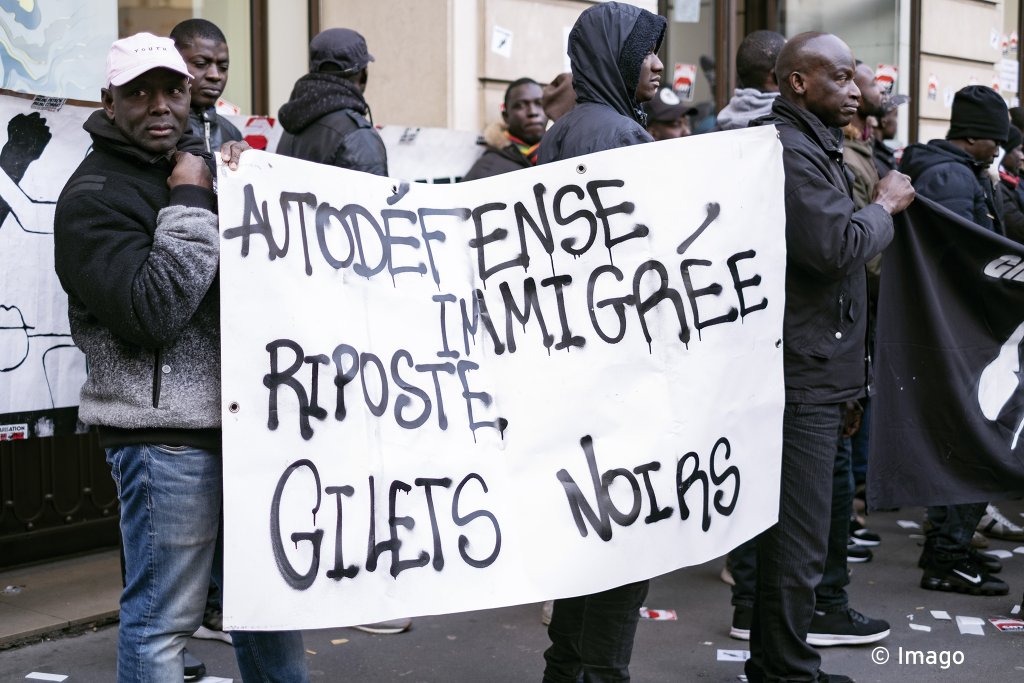 Presumably, like the Yellow Vests, the Black Vests protest movement is not planning on going away anytime soon. As the French government braces itself for another year of protest against its reforms, the Black Vests are getting ready to make sure their voices are also heard in 2020.