13 people have been arrested in a joint Italian-Greek police operation to break up an alleged smuggling gang. The gang specialized in sailing small groups of migrants between Greece and the south-east Italian coast.

Police in the southern Italian city of Salento and in Greece took part in a “vast operation,” according to the news agency ANSA, on December 12, in order to crack an alleged smuggling ring. The ring is thought to have been responsible for smuggling hundreds of migrants over the last few months from Greece to Italy on so-called “ghost ships,” – mostly sailing boats which arrive undetected on Italian shores.

ANSA reported that each migrant was expected to pay at least €6,000 for a passage on board. Italian police said that they had arrested seven people in Italy and six people in Greece during the course of the operation.

“Sometimes payments were made through electronic systems but we have also found bags with thousands of euros inside,” a police lieutenant named as Francesco Di Sabato told Reuters. He added that police believe the criminal gangs had made about €600,000 this year from the smuggling.

The operation, titled “Sestante” (Sextant in English) comprised more than 100 specially trained officers from various police forces; including the tax police, the Greek coast guard and an anti-mafia commando. The officers worked on tracing the connections between and the extent of the smuggling operation from the smugglers and traffickers to the recruiters who found the migrants willing to pay to travel from Greece to Italy.

According to the news agency Reuters, the Greek side of the operation “sought out clients in Turkey.” Most of the migrants are thought to have come originally from Syria, Iraq, Iran and Pakistan. Police believe that after being taken from migrant camps in Turkey, they would be transported via Athens to islands in the Adriatic sea, like Corfu, before being put on Italian boats for the last leg to the Apulian coast.

The boats are thought to have held about 20 people who were told to “hide below deck,” according to Reuters. According to the latest figures on Italy’s interior ministry website from December 13, just over 11,000 migrants have reached the country in 2019. Most from North Africa but some also arrive from Greece. 11,000 is less than half the arrivals in 2018 and less than 10% of those that arrived over the course of 2017. The highest number of arrivals happened in September 2019 with 2,498 that month and a similar number in October. So far, in December just 215 migrants have arrived. 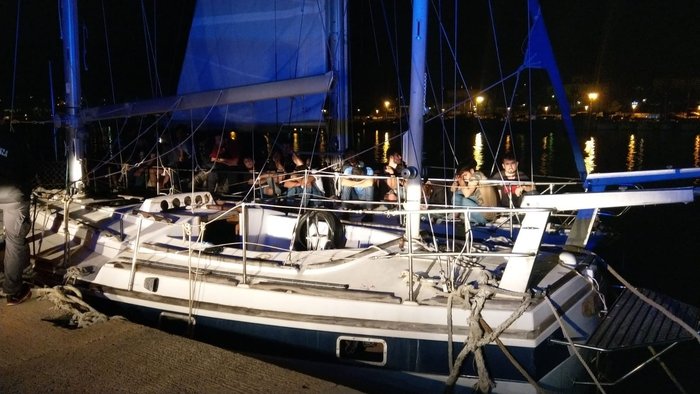 Still according to interior ministry sources, the majority of arrivals, of whom nationalities are known, come from Tunisia (24%), followed by Pakistan (10%) and Ivory Coast (10%) and Algeria (9%). About 2,259 arrived whose identities are still being checked. About 1,583 arrivals were unaccompanied migrant children.

The Italian monthly magazine Vita International, which writes about social themes, sustainability and the non-profit world, printed a short article about ‘Ghost ships’ in September 2019. In it, they claimed that 80% of migrants who had reached the Italian coast in 2019 had done so via so-called ghost ships. They wrote “while Interior Minister Matteo Salvini closes the ports and cracks down on private rescue organizations thousands are arriving quietly on our shores.” The magazine said that by September about 4,300 people had arrived this way over the course of 2019.

Reuters estimated in December that about 8,000 had arrived “without the need of any help from the coastguard, or NGO charity ships that patrol the Mediterranean,” however, this wasn’t just via ‘ghost ships.’

Vita International quoted another Italian daily newspaper, Corriere della sera, which has estimated that on top of the 4,300 ghost arrivals about another 2,000 people had managed to reach Italy untraced and unregistered. The magazine quotes data from the Italian interior ministry which said it had counted 208 ‘ghost ships’ in 2019 up to the beginning of September. Almost 6,000 people are thought to have arrived in this way in 2018.

In July 2019, the Italian financial newspaper Il Sole 24 Ore wrote about the phenomenon of ghost ships too. They printed figures from prosecutors in Agrigento in Sicily, under which Lampedusa also comes, which found that the number of ghost ships had actually risen in 2019. In 2017 and 2018, said the Agrigento authorities, about 10-15% of arrivals were thought to be from ghost ships, but in 2019 that number is believed to have risen to between 20 and 25%.