States have pledged more than $3 billion to support refugees and about 50,000 resettlement places, the United Nations refugee agency said on Wednesday at the end of the inaugural Refugee Forum in Geneva. Yet asylum rights remain "under threat," UNHCR's Grandi said.

On the second and last day of the Global Refugee Forum, the United Nation's refugee agency UNHCR spoke of a "decisive shift" in the approach to helping the rising numbers of people displaced by conflict, persecution or violence. The statement by UNHCR chief Grandi on Wednesday came after governments, international organizations and other entities pledged billions in donations and concrete promises.

The two-day conference, put on by UNHCR, opened in Geneva on Tuesday and saw high-level speakers like Turkish President Recep Tayyip Erdogan sharply criticize the current lack of international solidarity in caring for the world's some 26 million refugees.

But as the meeting ended late on Wednesday, UNHCR said that it had "secured wide-ranging and substantial commitments of support for refugees and the communities they live in."

According to UNHCR, more than 770 pledges were made for not only financial support but also for things like improving refugee access to employment, education, electricity, infrastructure and promises of more resettlement spots for the most vulnerable.

This week at the #RefugeeForum over 770 pledges were made to boost opportunities for refugees and their hosts.

Find out more about the wide-ranging and substantial commitments to help millions of refugees and the communities they live in worldwide.https://t.co/ytSg0jmh4Q

"Refugee situations are crises only when we let them become so, by thinking short term, by failing to plan or work together across sectors, and by neglecting the communities they arrive in," UN High Commissioner for Refugees Filippo Grandi said in the statement.

"At this forum, we have seen a decisive shift towards the longer-term view," Grandi said. The gathering was the first of its kind, bringing together heads of state, government ministers as well as business leaders, humanitarians and refugees themselves.

The event took place exactly one year after the UN General Assembly in New York adopted the Global Compact on Refugees - a framework aimed at providing assistance to refugees as wel as helping host nations deal with migration movements.

According to estimates, nearly 71 million people globally currently live in forced displacement due to war, violence and persecution, including nearly 26 million people who had fled across borders as refugees.

The topic of 'burden-sharing' was high on the agenda of the Refugee Forum, for obvious reasons: About 80% of the world's refugees live in poor and developing countries neighboring the refugees' countries of origin. As a result, these countries often feel they don't receive enough support to shoulder the heavy economic and societal costs alone. 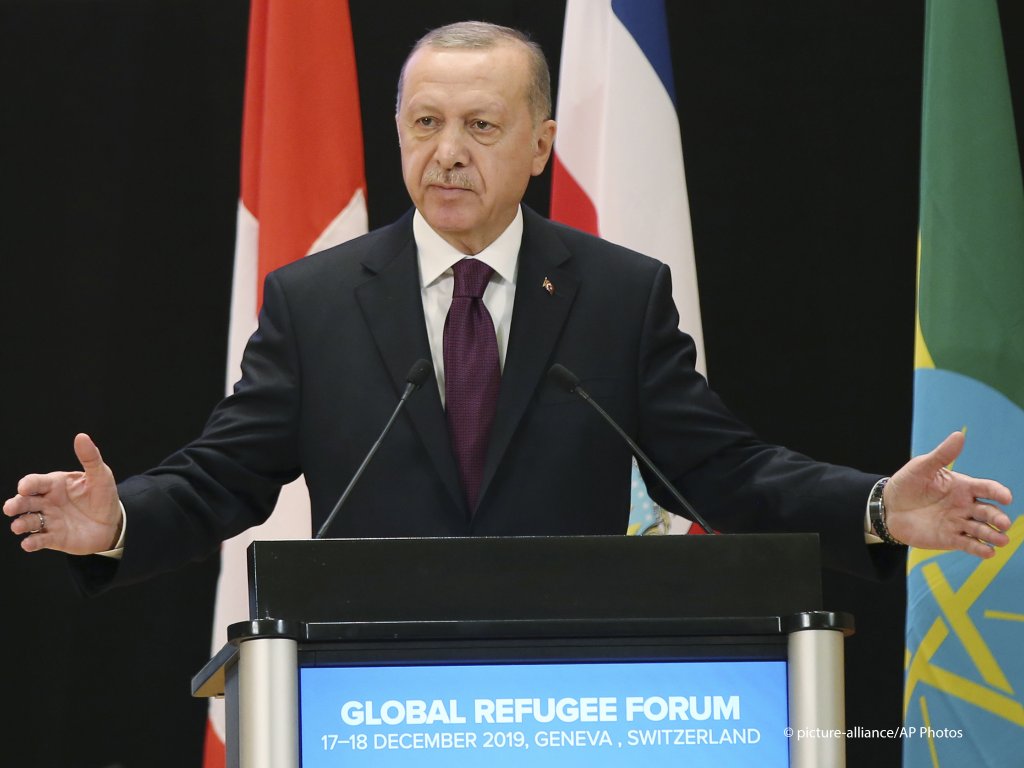 But UNHCR's Grandi told journalists he was hopeful that the forum had built the foundation for "better responses to refugee crises," pointing to a wide range of commitments governments, the private sector and others had made.

However, Grandi stressed that "to make it a success... is the responsibility of all of us."

Also on Tuesday, Germany pledged some €1.7 billion in refugee aid as well as 5,500 additional resettlement spots. "This is a trend that we will continue to see in the future," said German Foreign Minister Heiko Maas.

The 5,500 spots for people in need of protection are in addition to the 10,200 spots Germany had pledged to take in as part of the European Union resettlement scheme, which was launched in October 2017.

Many thanks to foreign minister @HeikoMaas and the German government for their staunch support to UNHCR, refugees and states hosting them - reaffirmed again at the Global #RefugeeForum. https://t.co/uSStoUE8dX

The goal of the EU-wide program was to bring at least 50,000 people in need of protection to Europe by the end of October this year. However, only some 38,000 people had arrived in Europe under the program by October 31 -- just three-quarters of the planned 50,000.

UNHCR's Martin Rentsch called Germany a "front-runner in refugee protection as it's "one of the few countries that not only "significantly finances humanitarian assistance in countries such as Lebanon, Turkey, Jordan, and other countries," but also took in "quite a significant amount of people, more than one million."

More than 1 million irregular migrants entered the EU in 2015. Many of them were refugees fleeing war and extreme poverty in the Middle East, Asia and Africa. That year, nearly 900,000 refugees entered Germany to seek sanctuary under Chancellor Angela Merkel's open-door policy.

But concerns remain, including Berlin's controversial policy to repatriate failed Afghan asylum seekers to Afghanistan, where German troops remain deployed and attacks on civilians are a near-daily occurrence.

Financial and other pledges

UNHCR said it had received a number of major financial pledges, including more than $4.7 billion by the World Bank Group and $1 billion from the Inter-American Development Bank. In addition, a broad range of states and other entities had jointly pledged more than $2 billion to support refugees and host communities.

According to UNHCR, the private sector made the "widest range of commitments ever" for refugees. Its pledges include funding and initiatives making at least 15,000 jobs available to refugees, as well as some 125,000 hours per year of pro bono legal counselling.

Moreover, third countries offered additional resettlement spots for the most vulnerable people already living as refugees in countries like Lebanon, Jordan or Libya.

The European Commission said EU member states collectively offered over 30,000 resettlement places for 2020, with the EU providing €10,000 per resettled refugee in financial support to the resettling member state. That's on top of the 50,000 spots of said EU resettlement scheme.

EU shows global leadership on resettlement. At the #RefugeeForum EU Member States’ pledges exceed 30,000 resettlement places for 2020. When we cooperate and work together, we create durable, effective, safe systems to offer protection to the world’s most vulnerable #MigrationEU pic.twitter.com/bcIoZ8kiBr

UNHCR, however, estimates a need for 1.44 million resettlement spots worldwide next year. This is one reason refugee chief Grandi said the right to claim asylum, enshrined in international law, remains "under threat."

"The reality is there has been no real systematic burden- and responsibility-sharing," he said, without naming names. "We cannot go into a world in which responsibility-sharing means some states keep all the refugees and some states pay all the money. We cannot do that, that is why we have resettlement, why we have different types of partnerships.

"That is why asylum has to remain a reality in all parts of the world, including in the rich countries and even more in rich countries that have so many responsibilities," Grandi concluded.

The next Global Refugee Forum is expected to take place in four years' time.

With material from AFP, Reuters