Alma Zadic: The refugee who became a government minister

Alma Zadic was born in Bosnia. In the 1990s - during the war in the former Yugoslavia - she fled to Austria with her parents. In early January 2020, she was named Austria's new justice minister - the first minister in Austria with migrant roots.

"This will make a difference: that for the first time Austria will have a minister who was not born in Austria," Alma Zadic said in her acceptance speech, as she appointed as justice minister in Austria's new Conservative Party-Green Party coalition government, which took over power at the beginning of 2020.

Although she had wanted intended to use her migrant background as a positive as she entered her new office, it unfortunately sparked a wave of internet hate speech in Austria instead, coming mostly from the far-right and so-called Identitarian movements. Comments such as "a criminal Muslim woman is becoming justice minister: sharia (Islamic) law is coming [to Austira] soon," were shared chiefly by followers of Austria"s far-right Freedom party, FPOe, (who shared power with Kurz’s Conservative OeVP Party until new elections in September 2019), as reported by the AFP news agency.

While some sought to accuse Zadic of meeting Islamist groups in Austria, others simultaneously said she was gunning for the far-right and fascists in the country. These attacks against her person have already forced her to seek police protection; meanwhile Zadic has declared publicly that she didn't follow any particular religion or dogma.

"Already on day one, this could be an outlier of cracks in the [new] coalition. […] The Greens and Zadic will need strong nerves to weather this storm," wrote one commentator in an article about the hate campaign against her in Austria's Der standard newspaper.


Zadic does, however, indeed appear to have strong nerves. Following the attacks and accusations, the new minister is now riding high on a solidarity storm - so much so that it garnered its own hashtag in social media. On January 11, she posted a series of tweets thanking those who have supported her, saying that the "solidarity wave is overwhelming and has brought her the strength to push back against her dissenters."

Zadic is a Green Party politician - and a professional lawyer. According to information on Austria's "My Parliamentarian" website, she became a politician for the Green Party in 2017. Before entering politics, Zadic worked as a senior associate at the international law firm, Freshfields Bruckhaus Deringer.
Earlier in 2014, Zadic was a consultant at the UN. During the course of her career, she has worked and studied in the US, Italy and the Netherlands. 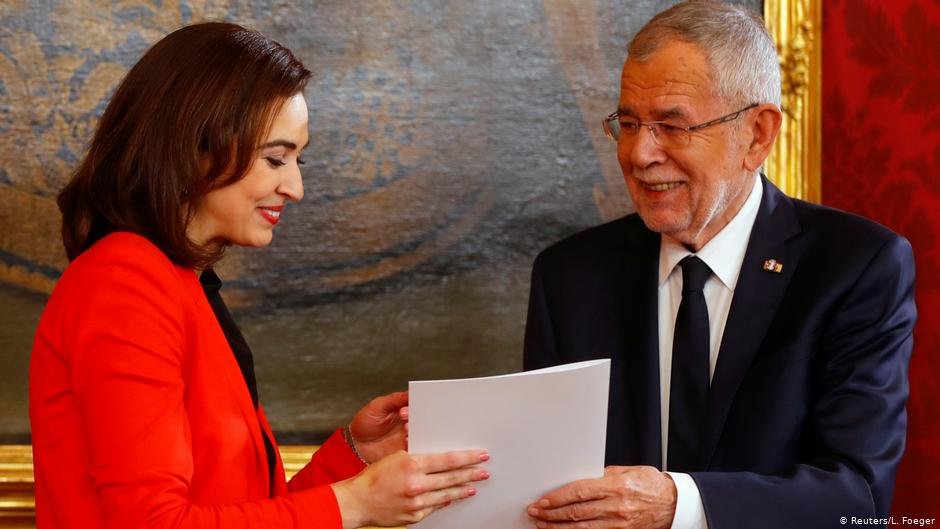 Reforms ahead - especially for migrants

Born in 1984, Zadic is the youngest justice minister to serve Austria, according to Austria's national public broadcaster, ORF. The state broadcaster notes that she will be taking on an office which is "in urgent need of reform and has the potential to create a lot of conflict."

ORF also referred to Zadic as a "successful woman with a migration background, who has been the target of a wave of hate on the internet."

Despite the hate speech campaigns against her, Zadic enjoys the support of Austria's Conservative Prime Minister, Sebastian Kurz, for now -  as well as that of many other politicians. Kurz defedned his new justice minister on Twitter, saying that "hate on the internet […] has no place in our society. We will fight this kind of thing, whether it comes from the left, from Islamists or from the right. @Alma Zadic and everyone else who are affected by this have my full support."

One day later, Kurz started to lay out the terms for his new government, in which Zadic serves as justice minister. He said that the new government would continue to "try to reduce illegal migration." However, in the same tweet, he underlined that Austria would work hard to offer every child in the country the chance for education and vocational training which would lead to further Austrian success in the future.

In an interview with the left-liberal weekly newspaper Falter, Zadic shared how she had received a series of death threats already. She elaborated further about the death threats in a TV interview, saying it "wasn't easy" to be exposed to the particular kind of hate speech, but adding that she was going to "remain strong" in the face of such adversity.

Instead of dwelling on the negativity of hate speech, Zadic prefers to  highlight how far immigrant communities had come in her adopted country: Speaking to Austria's biggest regional newspaper Die Kleine Zeitung, Zadic stressed that this is "the first time that someone with a migration background has been appointed a minister. A few years ago that would have been difficult to imagine. Hopefully in a few years' time, this kind of thing won't cause any problems at all."

Zadic underlined in the interview once more that she felt strengthened by the wave of solidarity following the threats and attacks, and that messages from fellow politicians and ordinary citizens had really helped strengthen her resolve. When asked what she as a Green Party politician will bring to her role as justice minister she simply replied that she wants to "modernize justice and bring it nearer to the people. That is very important for me because justice is there for the people, and it is an important pillar of our democracy."