In the first 24 hours of its release on January 1, the musical comedy Tolo Tolo was the biggest grossing Italian film of all time. Its subject matter: migration, Italian society and the right to dream, which has set Italy talking.

Checco Zalone is used to big box office figures and Italian accolades. Over the last few years, films about the comic personality created by Luca Medici have been big draws. Zalone's character, which started as a TV comedy sketch, represents and lightly sends up, and lovingly portrays, the average Italian middle-aged, center-right voting southern man, with all the stereotypes that implies.

At first glance, his latest film Tolo Tolo which is apparently a bastardization of the way a child might say "alone alone" (Solo Solo) appears to confirm every stereotype that we might have about that ‘average’ Italian man, and the ones he might have about migrants from Africa.

Causing controversy
Ahead of the film's release, a song believed to be a teaser for the film stirred some controversy. Checco released a single "Immigrato" (The Immigrant), a reference to a song from the eighties -- "L’Italiano" (The Italian)--, which sung about Italian stereotypes.

The song, which portrays an African immigrant following an Italian man wherever he goes, asking for money and then ending up sleeping with the man's wife in his home, laughs about all the stereotypes held on both sides. The American dancer and model Heather Parisi, who is a long-time resident in Italy and a frequent talk-show participant, said the song made her feel "uneasy". She posted a message about discrimination and a lazy use of stereotypes in response. Her attack prompted former deputy Prime Minister Matteo Salvini to raise his eyebrows about excessive political correctness and send a message of support to the character Checco on Twitter, telling him "Checco you are great!"

But it turns out that the song and its text are not directly related to the film which was kept closely under wraps until its release. The producers Taodue film said in their press release: "In the single 'Immigrato' Checco is representing, using his ironic style, a day in the life of an Italian who keeps coming across an immigrant." Their message being that the apparent use of lazy stereotypes is ironic.

Getting people talking
Now that the film is showing in cinemas, many critics have concluded that the film actually interrogates Italian attitudes to migration and has got people talking. Interviewed by the Italian daily Corriere della Sera at the end of December 2019 Luca Medici confirms that his aim is not to laugh at groups but to lightly skewer the discriminatory attitudes which his comic creation appears to hold. When asked whether the accusations that he is "racist" are fair, he answers: "I can’t believe that someone would be so stupid as to think so." Then he slips into character: "I’m not even racist against those who come from Salento (fellow southerners in Italy) because those people, for those of us who come from Bari, are the real 'terroni' (a pejorative name for people who come from the south of Italy)." 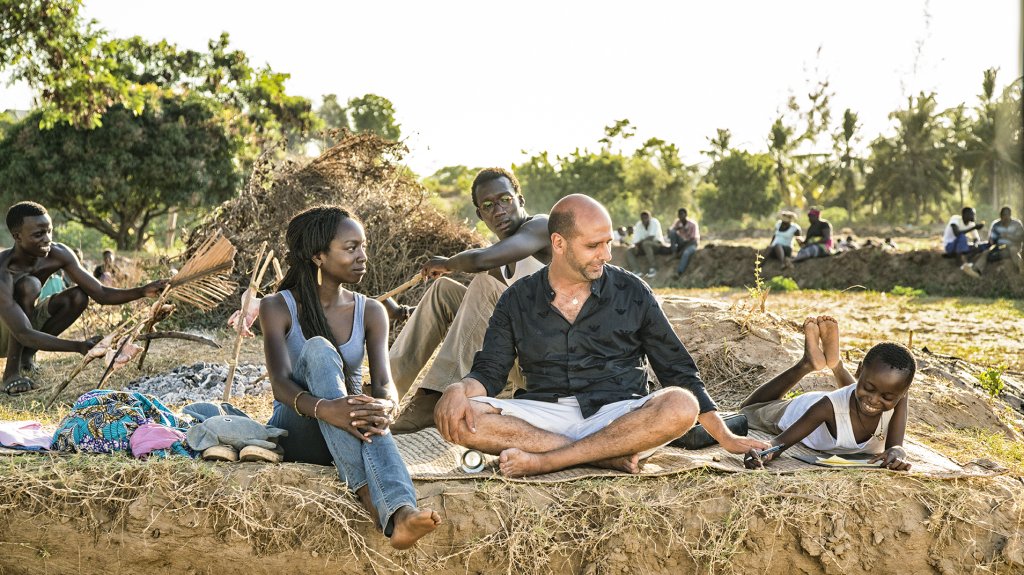 In the film, Checco's business fails in Italy, and feeling misunderstood, he heads to Kenya, where he finds a welcome and a job working in a tourist village as a waiter. He spends his time in his own bubble, caring about the designer labels he wears and moaning about how everything that happened to him in Italy was other people's fault. Then the village where he is working is overrun by terrorists and Checco and his friends are forced to flee. Eventually this "war" forces him to return to Italy, following the "torturous migrant route."

Along the way Checco travels with a friend Oumar who is in love with Italian society and Italian cinema, a young woman Idjaba for whom Checco holds a candle and a young boy "Doudou" who at first is introduced as Idjaba's son, but later it transpires she had been looking after him for a friend.

According to the German newspaper Sueddeutsche Zeitung Checco’s journey is similar to that of Joseph in the nativity story, as he must "learn to accept someone else's child as his own." Checco and the child end up on a boat in the Mediterranean from where they are rescued in a storm. Then follows several days waiting on board a private rescue ship, during which time Checco tells his fellow passengers they should hope not to end up in Italy because it would be the "worst ticket to draw in the lottery."

Once they do land in Italy, Checco himself is not welcome. His family had hoped he had died in a terrorist attack in order that the debts on his failed business be wiped out, and so that they could benefit from the compensation which would have been paid, had he died.

Back in Italy, Medici's lens turns back to skewer the Italians and the stereotypes of family, food and church, before, according to Sueddeutsche, propagating the message that, at the end of the day, no one is really alone. 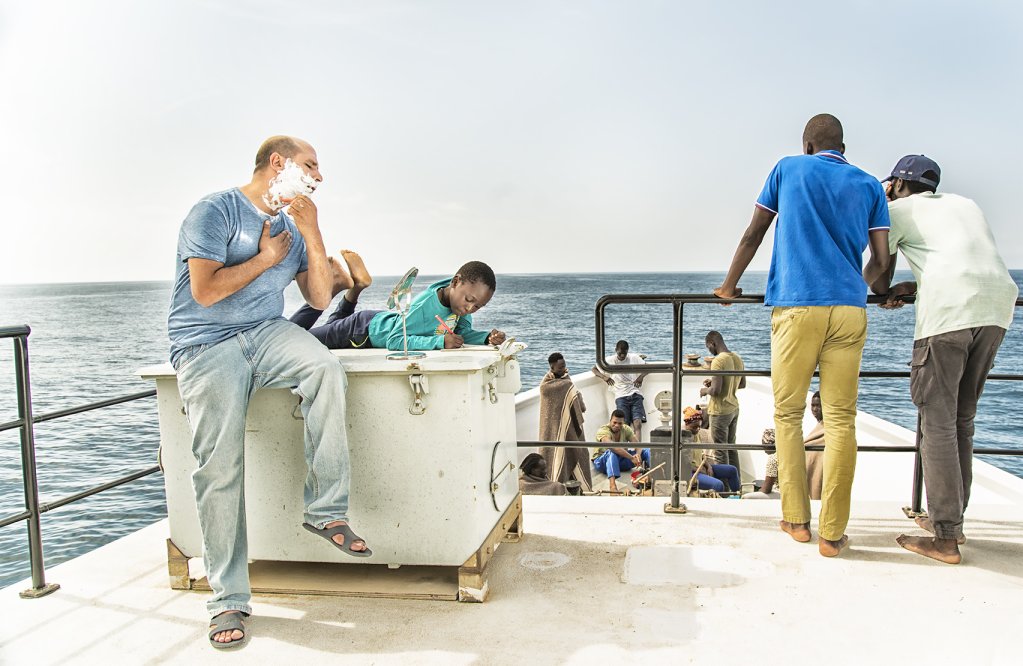 One of the film's actors, Mohamed Ba, a Senegalese man who has lived in Italy for many years, agreed to appear because he believed the film changed perceptions about African people. Ba plays an intellectual doctor in the film. He told a regional newspaper Il Giorno that while filming in Morocco they met many migrants who were hoping to reach Europe, and that after working on the film as extras they had decided to return home, to avoid risking dying at sea. "Perhaps this has saved some people from dying," Ba told Il Giorno.

It is not just how critics have interpreted the film however. Even while shooting, the film attracted accusations of racism. The Times of Malta reported in August 2019 that during filming, migrant extras working on the film were "subjected to sickening treatment." Allegations the film's producers repeatedly denied.

According to the newspaper, some extras and crew members claimed that "migrants, many of whom could not swim, were left on a crowded boat [in a water tank on set] for six hours without shade or breaks, leading to safety fears."

The paper quoted an unnamed crew member who said that the treatment of the African extras, who were migrants "definitely felt racist;" pointing out that "Maltese or European extras would never have been expected to accept the same treatment." The anonymous crew member continued: "They know very well that these people needed the money and perhaps they think they've been treated worse before."

These comments though were dismissed by the head of the Maltese film commission and the Italian producers, Taodue films, as coming from one "disgruntled employee who had been sacked." They added that none of the Maltese employment laws had been flouted or abused. Taodue added that "many extras are happy with the production, to an extent that they already signed on for another [one.]" To date, more than six million people in Italy have been to see the film and the producers have already cashed in more than €39 million in box office receipts. As an article in Italy's left-leaning daily La Repubblica put it, "It's a musical comedy which addresses the issues of immigration and the fascism which is within every one of us. There are laughs for sure, but also a lot on which to reflect."

At the press conference for his film, Luca Medici was in entertaining ironic mode as usual: "I didn’t expect to be the subject of all these chat shows [because of the critics] when we released the film. I am a bit tired of it to be honest;" he said with a straight face, before admitting that the publicity was beneficial to the film.

He then explained that Checco is "representative of our times." In the opening scenes he stands in the middle of a war zone without being affected by it at all. "He is someone who can't see past his own little problems," said Medici. "A war breaks out and all he moans about are his ex-wives, and the taxes he should have paid!"

Medici doesn't want to do the analysis for the journalists "that’s up to you to write," he says but by portraying a character who initially doesn't care, he seems to have melted hearts and got some people, at least, to start to think more deeply about migration and the migrants who arrive on Italian shores. Some are hoping the film's popularity breaks Checco's former film records and becomes the biggest grossing Italian film of all time.