EU figures estimate that 6.9 million children in Europe reside in a country different from the one on their passport. Around two-thirds of these hail from outside the bloc. The figures are rising, albeit not that fast.

A study by the European Commission's Knowledge Centre on Migration and Demography late last year sought to ascertain how many migrant children reside in the EU, and where they hail from.

While stressing that precise data is hard to come by, especially for specific age ranges, the researchers found that roughly 7% of children in the bloc live somewhere other than their country of nationality. Around two-thirds of them had moved from "third countries," with the remainder being EU nationals who live in a different member state.

The figures for both third-country and intra-EU migrants under the age of 20 had risen between 2014 and 2018, the most recent year with available data, but perhaps by less than you might expect given the migration crisis that came to a head in the second half of 2015 and persists on a smaller scale today. Intra-EU migration was actually rising at twice the rate of third country migration across the bloc, despite the migrant crisis. 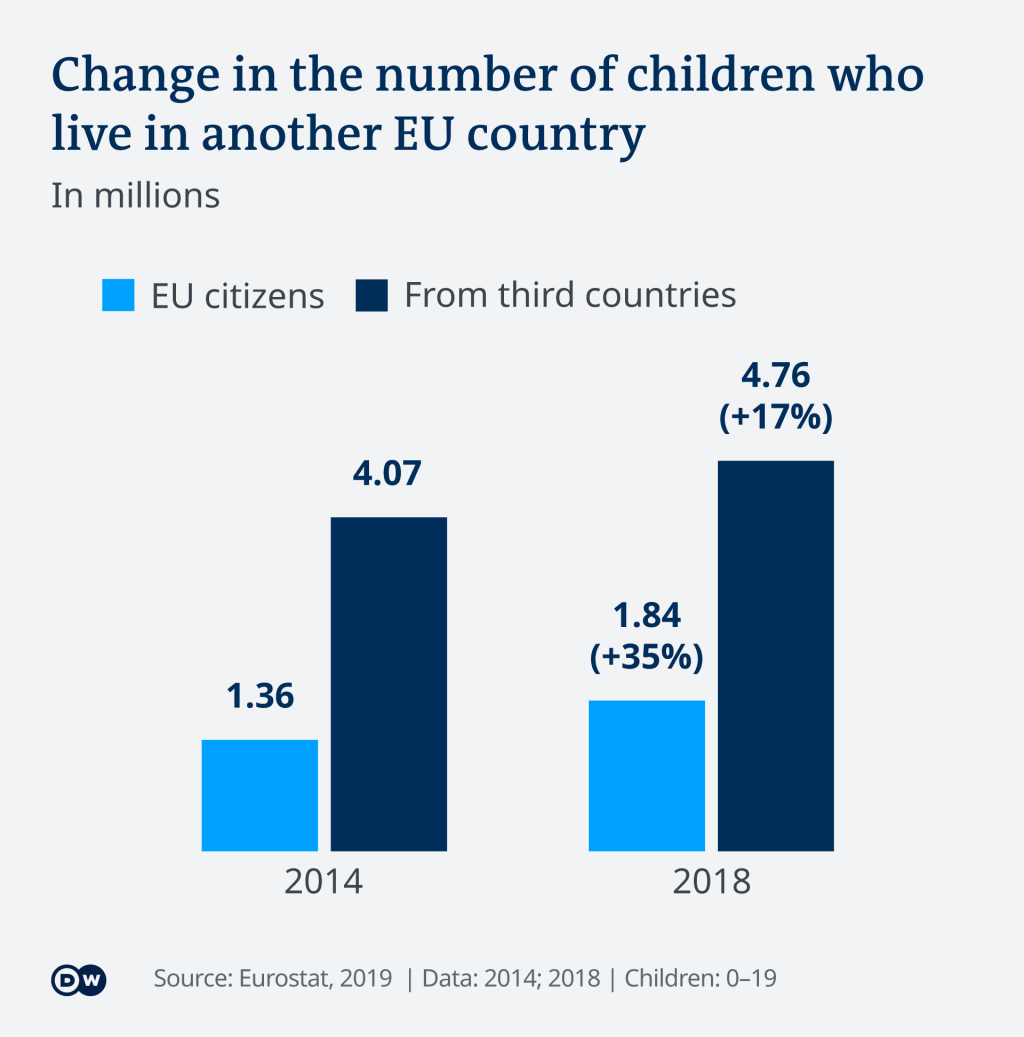 The study's authors estimated a roughly 10% decrease if you adjust the figures to represent the definition of a child in international law — people under the age of 18, as opposed to 0-19 year-olds. Then, you would land at an estimated total of around 6.9 million, versus 7.6 million under the age of 20, the age group for the raw data (and for all graphics in this story).

Read more:  Children on the Move: Refugees and experts reassess the future of young migrants

Germany hosts the most non-EU youngsters

Although a small chunk of the grand total, some of the more precise available data pertained to asylum applications; in these cases, countries are obliged to report age data on applicants to the EU's statistical agency Eurostat.

The footprint of the migrant crisis was visible in the figures too. The peak in applications came in 2016 — explained by the typical delay in the application process, with many of 2016's applications likely coming from people who had entered Europe in 2015. Almost 400,000 under-18s' applications were logged in 2016, versus 185,000 in 2018, with provisional estimates for 2019 suggesting a further decrease.

Children represented around 30% of asylum applications. Sixty percent of the applications between 2015 and 2017 came from three conflict-ridden countries — Afghanistan, Syria and Iraq — with another 15% of the total hailing from the Balkans and Eastern Europe.

Unsurprisingly given its size, its history of encouraging migrant labor from non-EU countries like Turkey, and the role it assumed during the migrant crisis, Germany was home to the most children from third countries — an estimated 1.1 million by 2018. More strikingly, the figure had risen more sharply in the 2014-2018 period than in much of the continent, increasing by almost half a million. By contrast, Italy, in second overall, actually logged a decrease of around 60,000 in its estimated total over the five years.

Austria, Sweden and Malta also experienced what the EU classified as strong proportional increases akin to Germany's, with significant upticks logged in Denmark, Slovenia and the Netherlands.

Some of the eastern European countries with the toughest responses and rhetoric regarding to the migrant crisis — like Hungary, Bulgaria and Romania — all appeared far lower down the list, with totals under 20,000. Even populous Poland, home to almost 40 million people in total, was on just 25,712, sandwiched between Finland and Republic of Ireland, both with populations nearer 5 million.

Romanians most likely to grow up elsewhere in EU

Despite a comparatively short period in the EU, and even less time with access to unfettered freedom of movement throughout the bloc, Romania comfortably topped the table in terms of children growing up in a different EU member state.

There followed three of the EU's largest countries in terms of population — Italy, France and Germany.