On Friday, riots between African and Afghan migrants at the Moria refugee camp on the Greek island of Lesbos broke out following the stabbing of a 20-year-old man from Yemen and the subsequent arrest of a 27-year-old Afghan. The incident was already the second death at Moria this year.

Protests broke out Friday on the Greek island of Lesbos in and around the country's most populous refugee camp. The protests came after a Yemeni asylum seeker died of stab wounds. Several dozen migrants set fire to trash bins, blocked traffic and chanted "Moria not safe" outside the camp before riot police were called in to disperse them.

Authorities said the 20-year-old man from Yemen died while being taken to a hospital late Thursday following an altercation at the camp between him and a 27-year-old Afghan migrant, who was arrested in connection with the incident on Friday.

Man arrested over killing of migrant in Moria https://t.co/YeIJtS5ZXF pic.twitter.com/KJ4vqdqW12

The demise of the Yemeni man was already the second violent death of a migrant on Lesbos this year: Last Wednesday, a 20-year-old Congolese asylum seeker died in a hospital on the Aegean island. According to Ekathimerini, a 27-year-old Afghan had attacked him with a knife on New Year's Eve.

Severe overcrowding across the islands

Over the past year, overcrowding at Moria, the largest camp on the Greek Aegean islands, has steadily worsened as the number of arrivals of migrants and refugees using clandestine routes from Turkey to the Greek islands remains high.

Last year, some 60,000 refugees and migrants arrived on Lesbos, the Dodecanese islands, Samos and Chios, close of half (45%) on Lesbos. With a total of 75,000 sea and land arrivals to Greece last year -- according to UNHCR data -- this means that eight out of ten people who came to Greece last year arrived on the Aegean islands.

The migrants come to the islands in the hope of eventually traveling from there onwards to wealthy European countries. 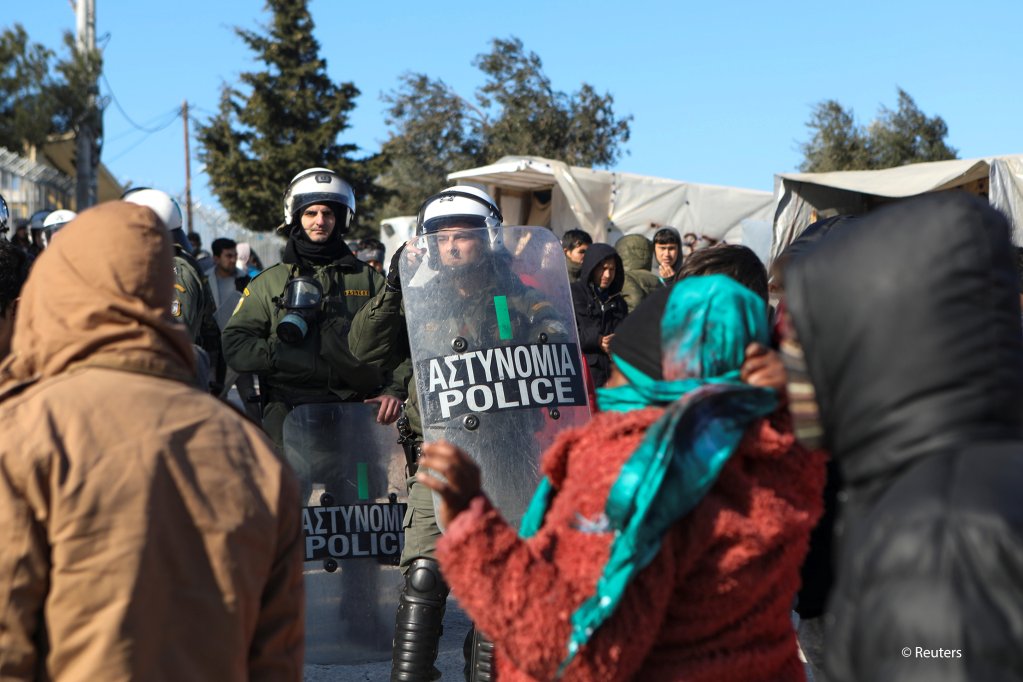 At Moria, more than 19,000 asylum seekers currently live in and around the site -- that's despite the camp only having capacity for 2,840 people. The situation on the other islands is equally severe and living conditions have been repeatedly criticized by rights groups and medical charities.

According to the latest UNHCR data, some 41,300 refugees and asylum seekers currently stay on the Aegean islands, the majority of which from Afghanistan (48%), Syria (20%) and Palestinian territories (6%).

With the 2016 EU-Turkey deal, the European Union agreed to give Turkey up to €6 billion ($6.6 billion) in aid for Syrian refugees and other incentives to persuade Turkey to stop migrants leaving for Greece.

This week, more protests are expected on the islands of Lesbos, Samos and Chios, all three located mere kilometers off the Turkish coast.

On Wednesday, Greece's conservative government reinstated the migration ministry six months after it had scrapped it. Since July, more than 10,000 migrants have been relocated to mainland Greece in frantic efforts to ease the overcrowding on the islands.

Those efforts, however, are still not nearly enough, for the number of arrivals still exceeds the number of those brought to the mainland: In December alone, more than 6,000 people reached Lesbos, the Dodecanese islands, Samos and Chios.

Separately, the Greek government earlier this month announced a list with 12 countries that are considered safe to return rejected asylum seekers to. NGOs criticized the plan, claiming that it would eliminate country-specific nuances and endanger some asylum seekers, especially gay and transgender people.