Migrants in the UK: How safe is your workplace?

Britain likes to pride itself on high standards of health and safety in the workplace. But cuts to the national Health and Safety Executive (HSE) budget and legislation surrounding regulations mean the lowest paid and most precariously employed are among those most at risk, and often that means migrants.

"We noticed many years ago that among the names of the people who were killed and injured there would be eastern European names coming up. When you talk to a lot of those people, you discover that many of the workers in the most dangerous industries are recruited from abroad and there are reasons for that," says Hilda Palmer, a leading member of the Hazards campaign (a UK-wide network of resource centers and campaigners). She also runs the support and campaign group, FACK (Families Against Corporate Killers) and has lots of experience dealing with inquests and investigations following workplace incidents.

Palmer campaigns about hazards for all workers in the UK. Migrants however face particular challenges in her opinion because new immigrants and refugees tend to end up in the most dangerous industries such as waste and recycling, agriculture and construction which have "a very poor record and a very high rate of illnesses and deaths." Figures from the Health and Safety Executive (HSE) also show that these industries have the highest death and injury rates in the UK.

In the year 2018-19, the HSE records that 147 workers were killed in workplace injuries. However, that doesn't tell the whole story, explains Palmer. There are around 32 million people in the UK’s workforce, so "just" 147 deaths in a year might seem almost "reasonable" as a statistic. But, "when you add the people who die of work-related deaths, those driving for work, fishing or at sea (which are not counted in HSE statistics), in the air, or from illnesses related to work the figure would jump to about 140 a day, not a year." In fact, Hazards campaign estimates that about 1,500 people a year die at work and a further 50,000 from work-related illnesses, which can include things like suicide as a result of traumas suffered at work. 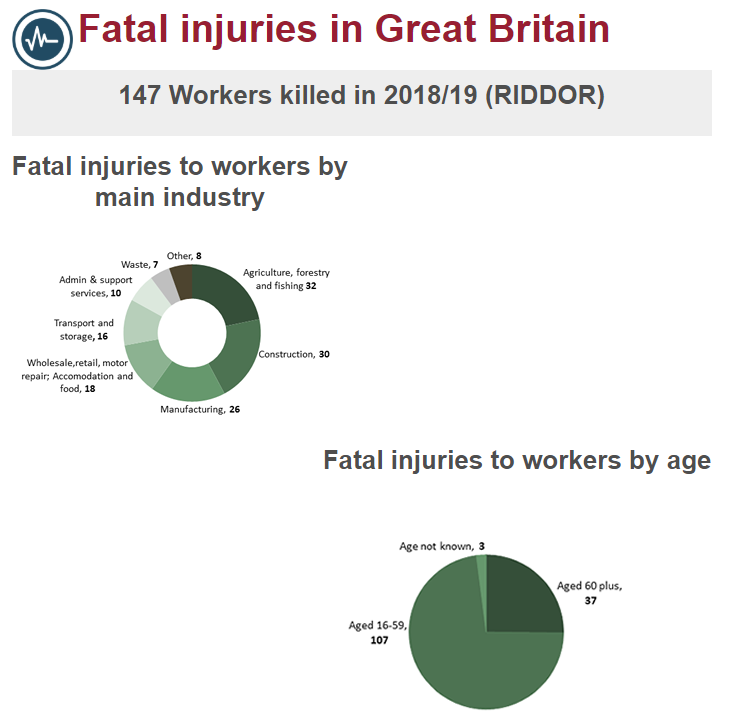 Despite a slight rise last year, the overall figures at the HSE show a downward trend in fatal injury, but Palmer underlines that the number of mental illnesses is on the rise. And even one person dying in a preventable accident is too many.

According to the HSE, waste and recycling has one of the highest death rates in the country. It's a gigantic industry, generating several billion pounds a year. In 2015, it generated 6.8 billion pounds for the UK economy and supported 103,000 jobs in the UK in 2013 (most recent figures from the UK Government Department for Environmental, Food and Rural Affairs (DEFRA)). Though exact figures are not known, waste and recycling employs its fair share of migrant workers and has lots of people sub-contracted through employment agencies, says Palmer. 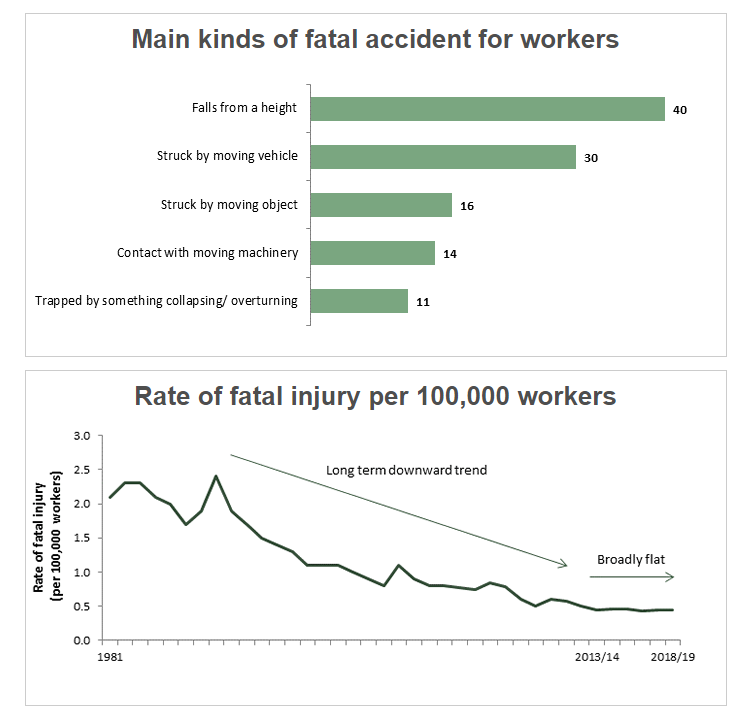 That was how five men from The Gambia and Senegal ended up in Birmingham in 2016 working at a metal recycling plant. They had made their way from West Africa via Spain and from there to the UK when work in Spain became harder to find. The BBC recently published a long report looking at how the families of the five are still waiting for justice, after the five breadwinners died in an accident at a plant in Birmingham in July 2016. The HSE investigation into the deaths is still ongoing. To date, the families have received no compensation.

The men were so badly crushed when a wall fell on the area they had been asked to clear, they could only be identified by their fingerprints explains the BBC report. The families' lawyer, Daniel Lemberger Cooper told the BBC that "the men’s deaths have implications for anyone employed in similar jobs." He is calling for the government to legislate to prevent the exploitation of workers. He told the BBC "if immediate, legislative change is not enacted, there are going to be more injuries and further deaths. The government and employers will have blood on their hands." 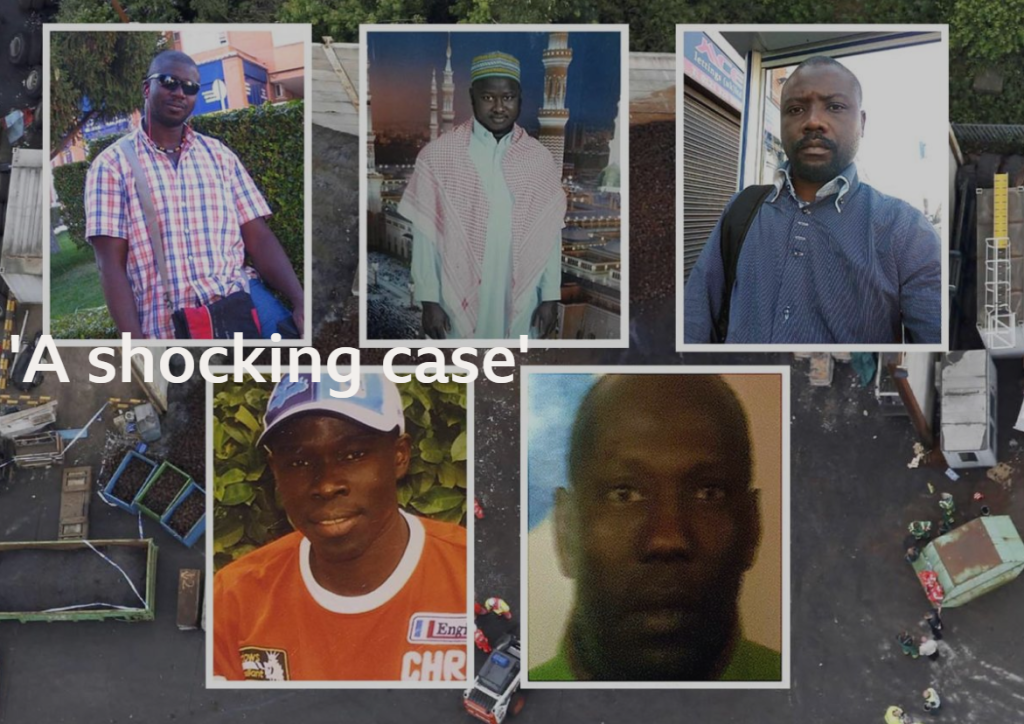 In fact, Lemberger Cooper told the BBC that "the recycling industry exploits migrant labor for enormous profits." The men were employed, he explains, on "zero-hours contracts, temporary and agency work." He calls their employment conditions "precarious."

And that is exactly the problem, thinks Palmer. Many migrants are employed under precarious contracts, and temp agencies don't offer much support for workers' rights and those working for them tend to be poorly unionized too.

Yet the industries which require relatively little training and skills is where the latest wave of immigrant workers is going to gravitate to, explains Palmer.

The duty of a safe workplace

Every employer in the UK "has a legal duty to provide a work place and work which is as free from risks to the health and safety and welfare as is legally practicable," says Palmer. But employment relationships via agencies and other countries can make it very difficult to enforce that, she explains. Workers like the five West Africans had very little realistic chance of "ensuring they could get their right to a safe workplace enforced, particularly without any union." 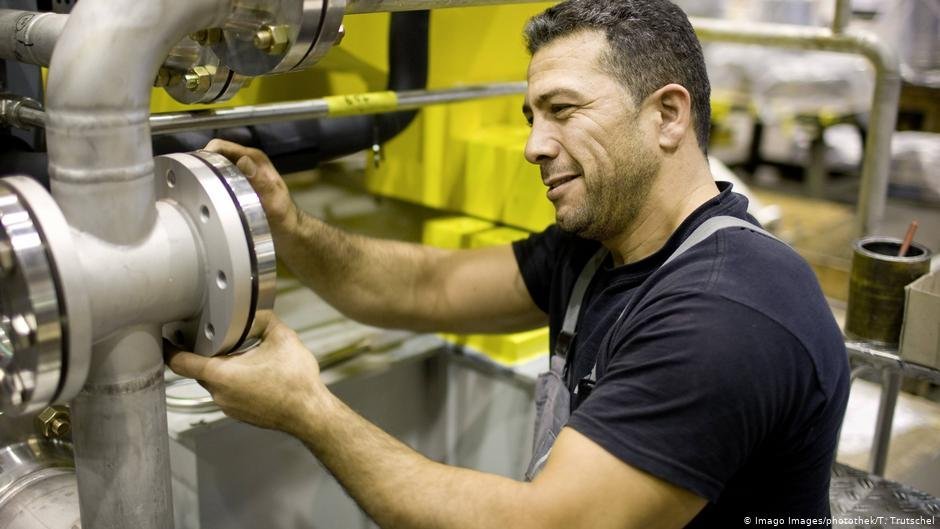 Palmer blames the cuts to the HSE budget, changes in safety legislation, and temporary charges placed on taking cases to employment tribunals; as well as the attacks on unions and their power which have been brought in since the Conservative party regained power (first via a coalition) in 2010. The HSE budget has been "halved" since 2010, says Palmer. Many proactive inspections have been banned and even though waste and recycling is still designated as a dangerous industry by the HSE, proactive inspections are not taking place as often as they should due to fewer resources.

Overall across the country, there are less and less people joining trade unions and that applies to the migrant workforce too. There are, however, some exceptions. In 2018 a group of Peruvian workers at an east London waste disposal plant went to the small union, United Voices of the World (UVW). According to the UVW website, the group was "complaining of dangerous conditions, mistreatment and low pay."

They were being "ruthlessly exploited," continues the website, "paid the minimum wage for their labor in dangerously dusty enclosed spaces with insufficient respiratory protection." What made the group different, according to UVW was that "they were united in their readiness to walk off the job -- within 24 hours of their first meeting with a UVW caseworker."
With the help of the union, the group "confronted the company owner" and extracted a promise to provide proper safety equipment and to install sanitary facilities. They also won a pledge to discuss a pay raise, plus occupational sick pay. This meant they would "get appropriately paid for their first three days of injury or illness, instead of nothing at all!", the website notes.

On top of that, celebrates the UVW website, they obtained a "personal apology from the site manager and a promise that for the day of this wildcat strike they would still be paid and not victimized!"

There are other unions too: the Bakers' Union, Unite and GMB which advocate for employees of big companies like McDonalds, Amazon and Sports Direct. It's not just about the mistreatment of migrants, says Palmer, but it just happens that many migrants work in the lowest paid sectors.

"In general, the lower your pay, the greater your risks of being killed, injured or being made ill by your work. Obviously, if you are a migrant, a refugee, a new migrant to this country, you are going to end up at the bottom of all this." It's essentially about power, says Palmer "and about not having that power in your work place vis-à-vis your employer. A lot of these sectors are viciously anti-union and will sack you [at the first whiff of dissent.]" 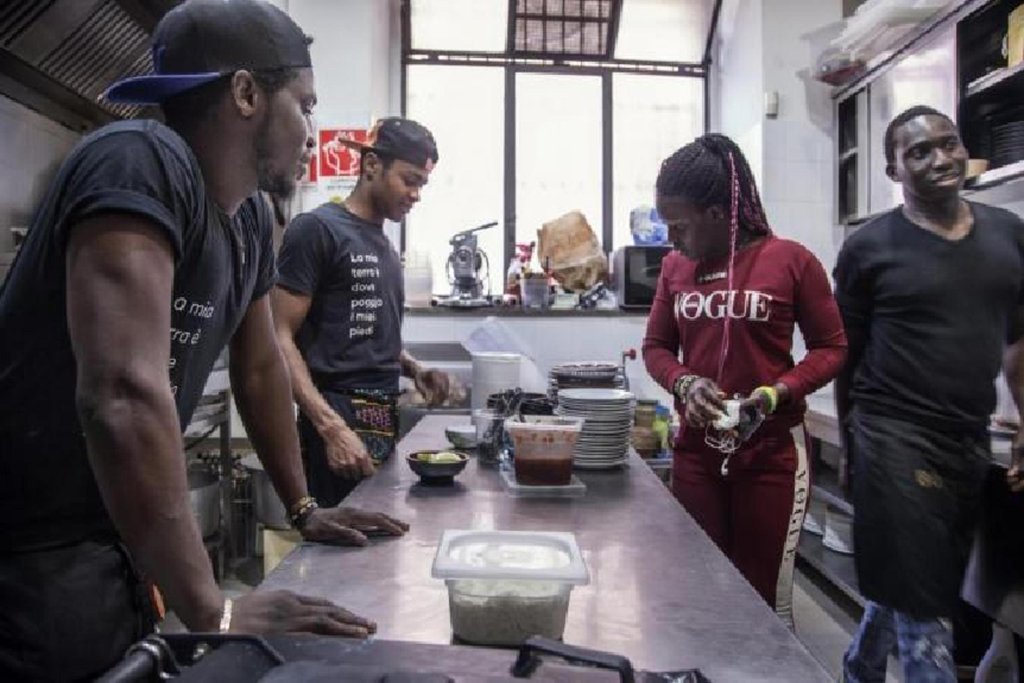 Palmer agrees that the outlook can look depressing and describes herself as "enraged" by the situation. "Precariousness is spreading throughout," she thinks. "What they [the government and big business] wanted is workers without security, with massively increased workloads, excessive hours, low pay and to damage their ability to trade unionize and organize in the workplace and that is exactly what has happened. You are constantly scared from month to month and that fear means you will try and hang on to whatever job you have got; even when they are cutting your terms and cutting your pension. That is what they wanted us to do, they wanted us to be scared."

Palmer says there are nevertheless reasons to remain hopeful. "There is a fightback," she believes. Young people are getting unionized, Palmer explains; the small unions like UVW are recruiting among migrants (and others) in sectors like security, cleaning, fast food and the waste industry and sometimes, like with the case of the Peruvians, they are winning.

If you are working in the kinds of sectors described in this article The Hazards campaign can be contacted via their website:http://www.hazardscampaign.org.uk/

Their magazine is via this link: http://www.hazards.org/index.htm

More about the Bakers Food and Allied Workers Union can be found on their website: https://www.bfawu.org/

Contacts under this page: https://www.bfawu.org/contact_list

The Unite Union is here: https://unitetheunion.org/

The GMB union is here: https://www.gmb.org.uk/

You can also report a health and safety issue directly to the Health and Safety Executive HSE https://www.hse.gov.uk/contact/index.htm