The Thot school opened its doors in June 2016 in order to offer migrants and refugees in Paris the chance to learn French, but also to help them plan a professional career and gain a new sense of dignity.

The first time that Mariame, Thot’s educational director, called Ahmed to ask him why he hadn’t come to his French class, the young man was flustered. He was 31 years old, and ever since leaving his home country of Sudan he had never thought that anyone would expect him to show up anywhere again.

But for the women who created Thot — Héloïse Nio, Judith Aquien and Jennifer Leblond —skipping class was not an option, at least not without a very good excuse. Their goal was to help migrants and refugees who had never received the equivalent of a high school degree to prepare for the main French-as-a-foreign-language diplomas: the DILF (Diplôme initial de langue française) and DELF (Diplôme d’études en langue française). And they wanted to do it in just 16 weeks. They had found specialised teachers, a psychotherapist, and a former employee of France’s national employment agency.

They named the school after the Egyptian god of wisdom, and were able to raise enough money through a crowd-funding campaign. The school started with four classrooms scattered throughout Paris and 40 students. Now 60 people are signed up, divided into five classes. They meet on the third floor of an Alliance Française just a few blocks from Montparnasse Tower in the south of Paris.

The three founders think it’s the perfect spot for Thot: “Here, everyone learns French just like French students do. They don’t have to tell anyone that they’re refugees, and they can participate in activities just like anyone else.”

The 16 weeks of French classes come complete with workshops in theatre, singing and drawing.

The formula is paying off. At the end of the first round of classes, 90 percent of Thot students earned the diploma they had been preparing for. The superintendent of Parisian schools, Gilles Pécout, congratulated the first class of Thot students in a ceremony at the Sorbonne. For many Thot graduates, it was the first degree they had ever earned.

‘Language is a weapon for survival and dignity’

Kamila Sefta, 67, is in charge of the students who have never learned to read or write. She’s been teaching French to foreign students for years, so she knows how indispensable language can be for integrating into a new society.

Some of her students aren’t used to holding a pen. But Sefta knows that language can become “their weapon for survival, dignity, and freedom”. She doesn’t make any extravagant promises, but she does assure them that after their time at Thot they’ll be able to “take the metro by themselves, fill out a form, or go to the doctor”.

The teachers at Thot may not want to treat their students as refugees or migrants, but sometimes reality catches up with them. Students occasionally have to miss a class in order to take care of paperwork or an immigration appointment. At the worst, they might be transferred to another region by France’s refugee-assistance system. 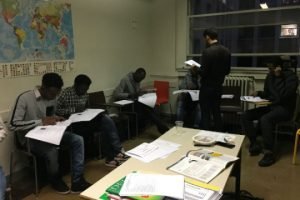 But teachers at Thot say that what really sets their students apart is motivation.

“I’ve never had students who were this motivated. They’re extremely lively and demanding,” says Thomas Lamouroux, a teacher at Thot. In his day job Lamouroux is a teacher at a business school where the students, in his words, come from a “privileged background”.

Adam, 21, was born in Chad and had never gone to school before signing up for Thot. In the classrooms at the Alliance Française, where the walls are covered with postcards from all over the world, he learned how to speak, read and write in French. Still hesitant, he dreams of becoming an electrician. He records all his French classes in order to listen to them again in the evening.

Another student, Babakar, feels like a weight has been lifted off his shoulders since he started at Thot.

“Before, I spent all day thinking about my problems,” Babakar said. “Now I dream of becoming a journalist to tell people about what is happening abroad.” 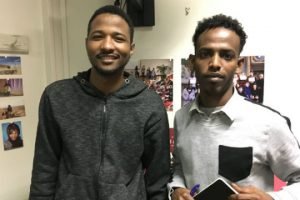 “Thot changed my life,” Babakar said. Now 25, he left northern Mali with his family before finally arriving in France in October 2015. Although his asylum application is still pending, he can at least begin to think of his own projects.

Babakar especially wants to discover the writing of French author Albert Camus. He’s been anxious to get into books like Camus’s “The Stranger” ever since he met French rapper and writer Abd Al-Malik. Al-Malik is a sponsor of the school, and he recently put out a book about how much Camus inspired him.

Before the last round of classes started, Al-Malik spoke to the students at Thot.

“Language is my nationality,” Al-Malik told them.

France 24 is not responsible for the content of external websites