The United Nations has called for those responsible for deadly airstrikes in Tripoli last July to be brought to account. The attack killed 53 migrants detained in a hangar which took a direct hit.

The attack in Tajoura on July 2 was one of the worst since Khalifa Haftar’s forces began their offensive in April 2019 against the Government of National Accord in Tripoli, which is backed by the UN.
On Monday the UN Support Mission in Libya (UNSMIL) and the UN human rights office in Geneva released a 13-page report demanding that Libyan authorities "conduct independent, impartial and thorough investigations... with a view to ensuring swift prosecution" of those behind the airstrikes.
Michelle Bachelet, the UN High Commissioner for Human Rights, repeated a warning that the attack may constitute a war crime. 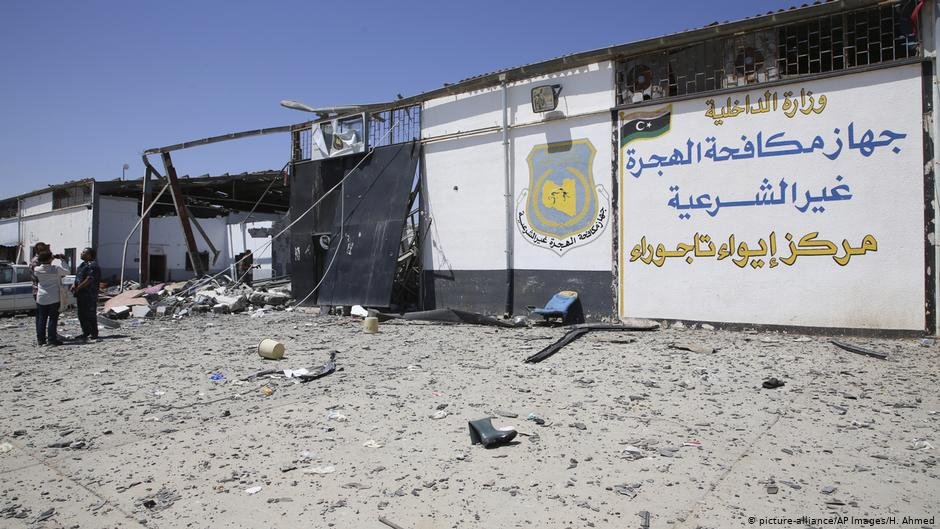 Still not clear who is to blame
The UN does not say who was to blame for the Tajoura airstrikes, but it suggests that they were carried out by a foreign backer of Haftar. "While it appears the airstrikes ... were conducted by aircraft belonging to a foreign state, it remains unclear whether these air assets were under the command" of Haftar "or operated under the command of that foreign State in support" of the general, it says.
Haftar’s fighters have denied responsibility for the airstrikes, according to the news agency, AFP.
Since the start of the offensive, the United Arab Emirates, Egypt and other countries have supplied Haftar with weapons. According to the AP news agency, suspicion for the Tajoura strike has fallen on the UAE, which has a fleet of fighter jets that can operate at night and deliver precision-guided munitions and missiles. The UAE has not acknowledged playing a role in the attack.
Migrants 'could have been saved'
The UN says that the Tajoura detention facility, run by a militia allied with the GNA, placed civilian refugees "in grave danger." The center was in a military complex located next to an ammunition depot, making it a prime target for opposition forces.
Witnesses have also told UN investigators that migrants were stopped by guards and forced back inside when they tried to escape. According to the report: "There are grounds to believe that migrants and refugees could have been saved, and their right to life protected, had they not been prevented from exiting following the first airstrike" that hit the weapons depot.
The second airstrike, eleven minutes later, directly hit the hangar filled with migrants, killing 53 people and injuring at least 140 others.
Thousands of migrants remain locked in detention facilities in Libya where many have suffered torture and abuse from militias in charge. The UN report calls for the closure of all migrant detention centers. According to the latest information received by the UN Human Rights Office, the Tajoura detention center remains open, despite an announcement by the GNA in August that it intended to close the facility.
Meanwhile the UN has also accused several countries with interests in Libya's long-standing conflict of "blatant violations" of an arms embargo against Libya. The countries met earlier this month in Berlin, where they agreed to stop interference and weapons supplies to the warring parties.
•••• ➤ The UN report "The airstrikes on the Daman building complex, including the Tajoura Detention Centre, 2 July 2019" can be found via the UN Human Rights – Office of the High Commissioner page here.