Olympian Taekwondo athlete Kimia Alizadeh defected from her home country because of its treatment of women. With her visa renewed, she is hoping to go to the 2020 Tokyo Olympics under the German flag.

Even the strongest of fighters can be subject to oppression and persecution. Iranian Taekwondo athlete Kimia Alizadeh knows this only too well. In 2016, she made history as the first Iranian woman winning a medal at the Olympic Games, which took place in Rio de Janeiro. But on returning from her success, she had to settle back into her life in Iran, where laws dictate large tracts of the societal roles to which women must adhere.

In the four years since her Olympic win, Alizadeh has continued to compete in various international championships and was even included on the BBC’s 2019 list of 100 inspiring and influential women from around the world. But realizing the full scope of the limitations that a life in the Islamic Republic of Iran would mean to her career and her life, the 21-year-old athlete decided to drastically change course in 2020.

Alizadeh left Iran citing sexism on the part of Iranian officials, as well as rejecting the wearing of the hijab, which in the Islamic Republic of Iran is legally mandated for all women. Announcing the move in an Instagram post on January 12, 2020, she said she no longer wanted to be part of "hypocrisy, lies, injustice and flattery" as "one of the millions of oppressed women in Iran."

Since leaving her home country, Alizadeh has been in the Netherlands and Germany under a tourist visa. She recently confirmed that she has now been granted a permit to remain in Germany for the time being while continuing her training. It is uncertain, however, how long she may be allowed to stay in Germany and what the future might hold for her and her career in Taekwondo. "We are not allowed to share those details," she explained.

Alizadeh told journalists that she realized that defecting to another country could seriously limit her opportunities to compete professionally for years to come, but added that this was a calculated risk for her.

"Even if I do not make it to the Olympics, it does not matter because I have made up my mind," Alizadeh said, adding that she didn’t expect to ever compete for the Islamic Republic of Iran again.

"I am just 21 years old and can attend world tournaments and future Olympics."

In order to compete at the Olympic Games for any country other than her native Iran, Alizadeh would have to obtain citizenship of the nation she would be representing at the event. However, changes to citizenship typically involve lengthy procedures that can take several years. Government officials allow for few - if any - exceptions when it comes to such prescribed processes. In Germany, the normal course of the naturalization process usually takes eight years of legal residency.

Regardless, Alizadeh has entered talks with Taekwondo associations in Germany to explore what the future might hold for her.

"If the German government assists me and I can go through this process as fast as possible, I might be able to make it to the Olympics too," she said, adding that she had "no other desire than (pursuing) Taekwondo, security and a happy and healthy life." 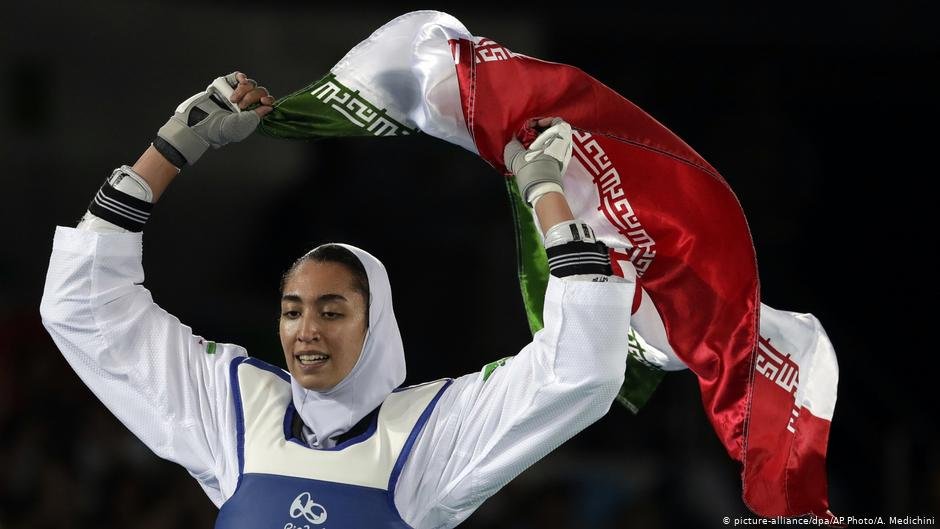 Several Iranian athletes have left their country in recent years, highlighting their frustrations with the regime. Last month, Iran's chess federation announced that Alireza Firouzja had decided not to play for the country because of its informal ban on competing against Israeli players. A few months prior to that, former Iranian world judo champion Saeed Mollaei announced he was also leaving the Iranian team for the same reason. Meanwhile, Iranian international soccer referee Alireza Faghani also left Iran last year and moved to Australia.

But in Iran, there’s little mention of this growing trend. The state-controlled media usually only report when athletes cease to represent the country but make no mention of their motivation. Only when the government can present a defection story as a national scandal does it allow media outlets to go into further detail.

Otherwise, essentially, they stick their heads in the sand when dealing with the issue. Abdolkarim Hosseinzadeh, a member of the Iranian parliament, said that "incompetent officials" were allowing Iran's "human capital to flee."

'A child of Iran'

Kimia Alizadeh, meanwhile, stresses that she regards herself as much more than just human capital; however, in her Instagram post she alludes to the treatment she received from government officials in the Islamic Republic prior to her defection. Stressing the level of government control over her life and career, she said that she had to toe the official line while "credit always went to those in charge."

"They took me wherever they wanted. I wore whatever they said. Every sentence they ordered me to say, I repeated. Whenever they saw fit, they exploited me," she wrote in her original post, while stressing that all women suffered greatly under Iran's patriarchy structures.

But Alizadeh finished saying that despite the oppression and abuse she and countless others had witnessed in her native country, she would forever remain "a child of Iran wherever" she is - even if, one day, she succeeds in competing under a different flag.