For refugee children who have missed school, participating in classes can be challenging, especially in a foreign language. A Berlin-based initiative tries to fill their knowledge gaps with free tutoring in Arabic on the weekends. InfoMigrants visited a class in Berlin to find out how the project is helping them get back on track.

On a Saturday afternoon in Berlin Lichtenberg, some 50 children and teenagers read and write Arabic texts, solve mathematical equations and study laws of physics. In one room, nine young boys and girls sit around a large rectangular table together with five mentors. In the adjacent room, mentors work with teenage students, half of them wearing a hijab, in groups of two and one-on-one. While the students are absorbed in their coursework, parents mingle and talk in the corridor.

"Whenever I don't understand something in school, I come here to learn it," says Nour, a Syrian girl who came to Germany in 2016. The 11-year-old struggles with math and sometimes with English, she says, partly because "some words are difficult in German," partly because "the teacher sometimes doesn't explain things very well."

Nour is one of around 150 students between the ages of six and 15 who learn English, mathematics, natural sciences and Arabic for two hours each weekend with the help of around 20 mentors. The Back on Track Syria project offers free, out-of-school tutoring for Arabic-speaking refugee youth in Berlin. 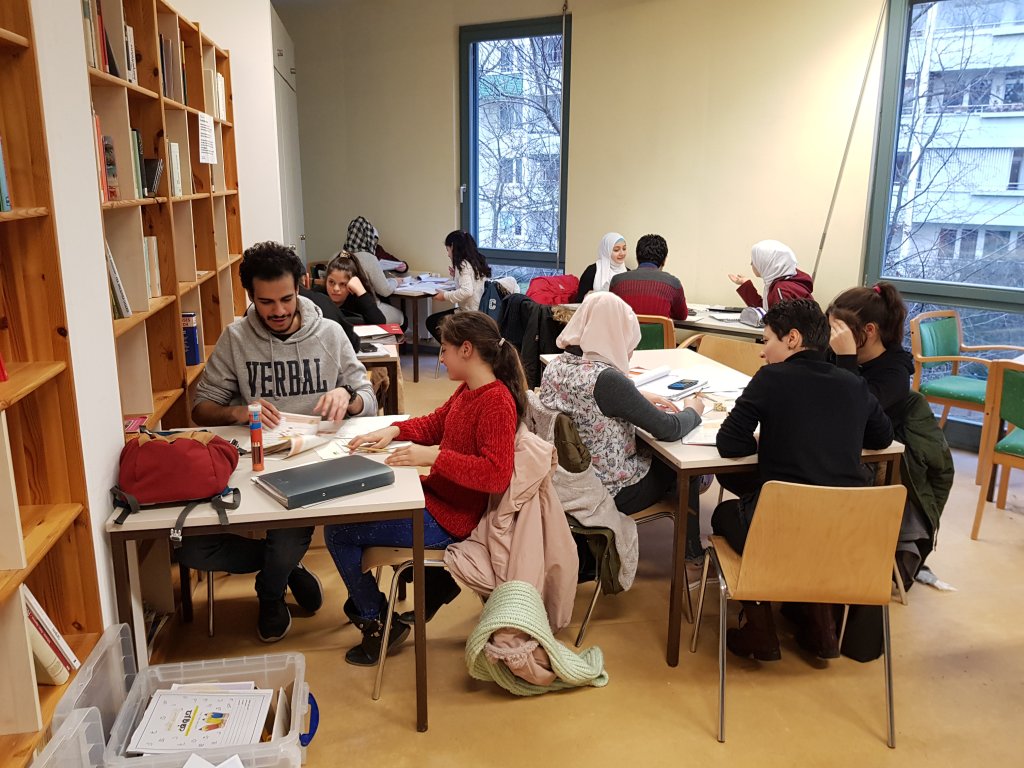 Shahd also enjoys coming to Back on Track sessions. When she arrived in Berlin in 2015 at the age of ten, she had been out of school for four years. In Turkey, where she spent two years in first grade to learn Turkish, she withdrew more and more, and her Arabic suffered.

After half a year in a regular class in Berlin without being able to speak much German, she took two years of a special welcome class for foreign students (more on those later) and was then transferred to a Förderschule, a school for students with particular challenges. Now in eighth grade, the 16-year-old is a sprightly teenager who enjoys English, music and arts.

Both Nour and Shahd say being able to speak Arabic is a big reason why learning with the Back on Track mentors is easier than in the regular classroom.

Back on Track Syria is the brainchild of Petra Becker, 57, whose passion for education is something she also attests to many Syrian parents.

While studying Islamic studies in Germany in the 1980s, Becker went to Syria to better learn Arabic. She married a Syrian man there and later returned to Berlin, where her two daughters were born. After ten years of working as a freelance interpreter in Germany, Becker and her family returned to Syria in 2002 where Becker headed the translation service at the German embassy.

Although the civil war drew closer to Damascus in early 2012, Becker resisted leaving as her older daughter had three months left until she'd finish high school. But eventually Becker and her daughters had to be evacuated. 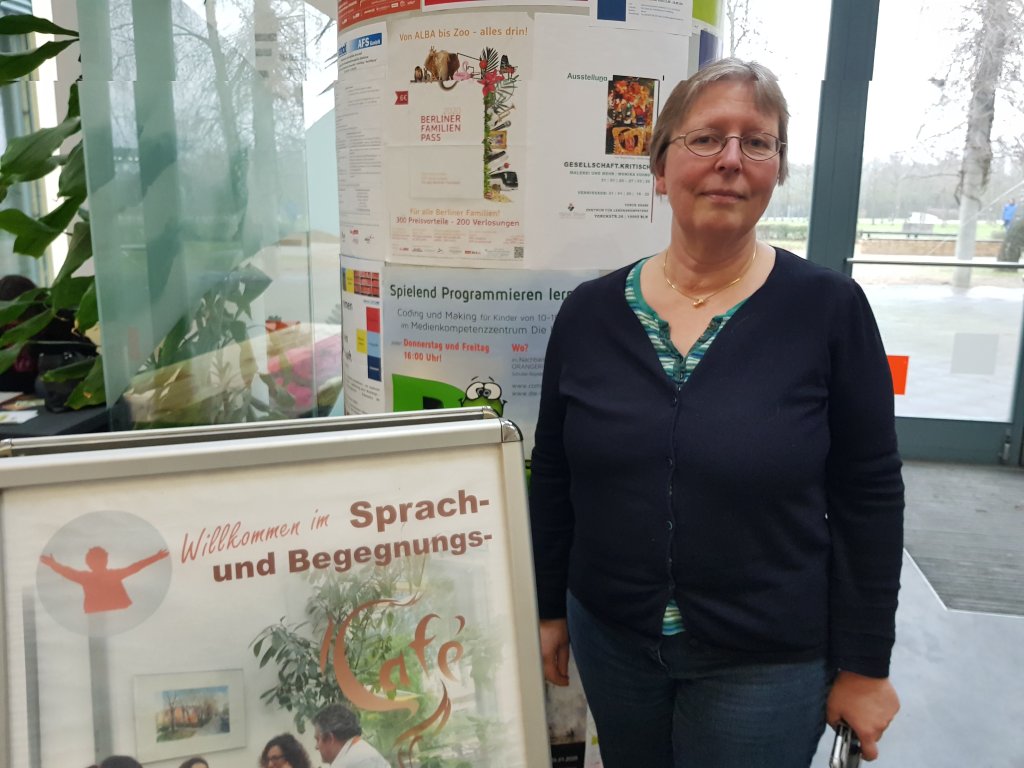 Back in Germany, Becker faced reservations by several German public schools because her daughters received most of their education in Syria. Being born in Germany, both daughters spoke German fluently.

Although she eventually managed to enroll both of her daughters, the experience made her wonder how much harder it must be for non-German parents to find an adequate school for their children.

Young refugees who come to Germany first take so-called Willkommensklassen ("Welcome classes") for one or two years to learn German and prepare for the regular classes. Launched in 2015, they aren't mandatory and can be different from school to school.

Becker is critical of these preparation courses and calls transitioning from them to the regular class the "crux"; yet Willkommensklassen don't take into account students' individual educational biography. "Nobody checks if they went to school before they arrived in Germany when they are being put into a regular class," she says.

The result, according to Becker, are teachers unable to cope, for instance when a student has no foundation in mathematics. A December 2016 study of the Humboldt University in Berlin echoes Becker's concerns: It found that difficulties with Willkommensklassen include the high fluctuation, a lack of clear, uniform guidelines to switch to the regular classes as well as insufficient training for German as a second language teachers.

And according to a more recent study by the Expert Council of German Foundations on Integration and Migration, forward-looking distribution, more teachers and more diversity competence are required for school integration to work.

Becker had the idea for Back on Track when her younger daughter attended the Protestant School Berlin Center, a pilot school for self-organized and resources-oriented learning that emphasizes building on students' strength.

"I realized this must be the key," Becker said: "To communicate to the children that they are already capable of different things, and to build on that." 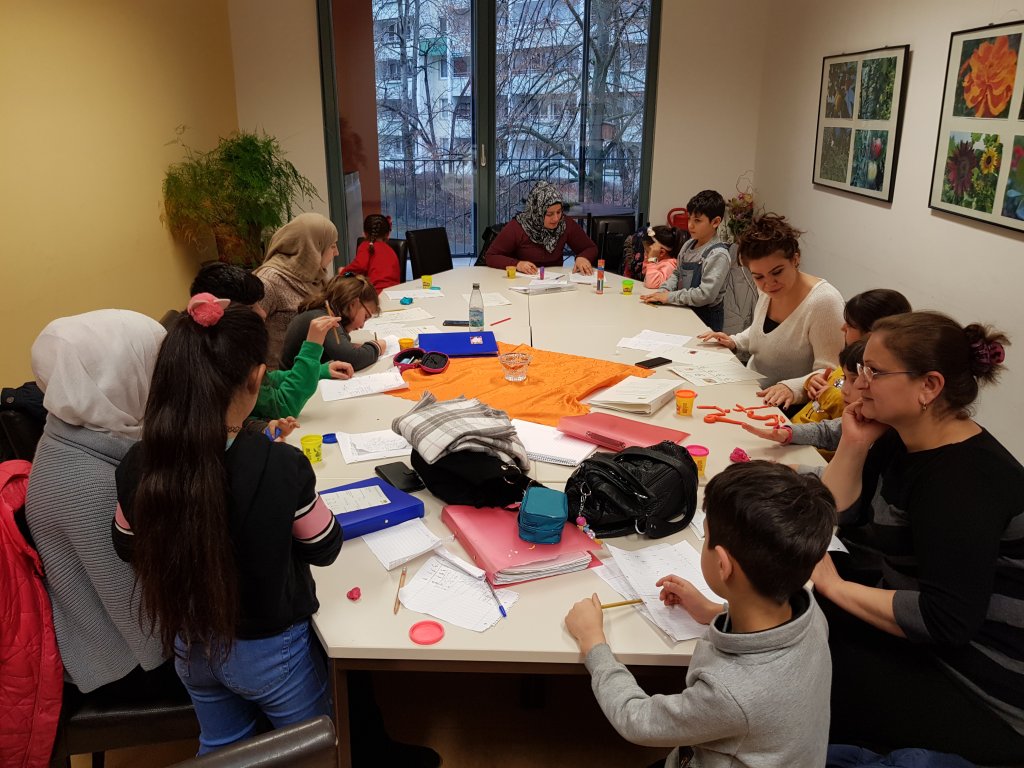 Becker also heeded the advice from several "Welcome teachers" in Berlin who taught German as a second language: They recommended not to teach German but whatever subject students need help with at their respective age -- in their mother tongue.

In 2016, Becker tested her idea with children in the now-closed emergency accommodation for refugees in Berlin's eastern borough of Lichtenberg. As the turnover of families prevented the Back on Track staff from working with the families long-term, they moved to the nearby two-story community center "Kiezspinne" ("neighborhood spider") in January 2017.

What began as a project with ten children is presently servicing 150 kids who come "more or less regularly" to Lichtenberg and the second branch in Charlottenburg in western Berlin. In its three years of existence, Becker says, the mentors of Back on Track Syria have worked with 350 Arabic-speaking children and teenagers. By far the most come from Syria, but there's also youth from Iraq, Lebanon as well as "very few" from Egypt and Yemen.

Volunteering as a mentor

Ihab Sari is one of some 60 mentors who volunteer on a regular basis for Back on Track Syria. Before he came to Germany in 2015, Sari worked as a physics and math teacher at the European high school in Damascus. He resumed his teaching activity in 2018 at the private Europa-Gymasium Berlin.

"From my experiences with Willkommensklassen [at the Europa-Gymasium Berlin], I know exactly how difficult it is to learn different subjects in a foreign language," the 28-year-old tells InfoMigrants. "Back on Track is a good opportunity to close the gaps from being out of school."

According to Sari, this holds especially true for the natural sciences subjects he teaches, where individual lessons build on one another.

Every Saturday, Sari tutors two girls who each missed two years of mathematics and physics. On Sundays, he also mentors two other girls in Charlottenburg. From his own experience, Sari says, around one in four Syrian youth has a gap in his subjects. That's because when the civil war started and teachers were enlisted, many school lessons had to be cancelled. Sari, who is currently working on his C2 German certificate (native-speaker level) to also be able to work for public schools, first explains concepts in Arabic and then teaches the same terms in German. This is "very important" as his students wouldn't be able to participate in the classroom otherwise, he says.

Each mentor works with an average of two to three children or teenagers: While younger children, who often first learn how to read and write in Arabic, learn in groups of five or six with one mentor, older students either have their own mentors or share one with someone on the same level.

While they don't need to be trained teachers, mentors have to be university graduates -- with the exception of some upper-level high school students who train peers who are a few class levels below them.

According to founder and managing director Becker, one of the basic principles of Back on Track Syria is that children decide not only which subjects they want to tackle first but also the speed at which they learn. "It's up to them whether they take home one or several lessons or say: 'I'm having enough on my plate already,'" she says.

Each journey with Back on Track starts with a placement test to find out what newcomers need at that moment, what their educational biography is, if there are any gaps because they missed school and which class they were in when they left Syria.

Not surprisingly, perhaps, the children often don't start with their weakest subject as they "don't dare to take it on and are stressed enough already," as Becker puts it. But "once they've been here a few times and realize there is little pressure and a friendly environment," according to Becker, they also tackle the subjects they find difficult. Homework is also voluntary.

Students also use learning diaries after each lesson to self-assess their progress, which provides constant feedback, Becker says.

When asked about challenges, Becker says parents often put too much pressure on their children. "We have to mediate a lot between students and parents and lower parents' expectations," says Becker. 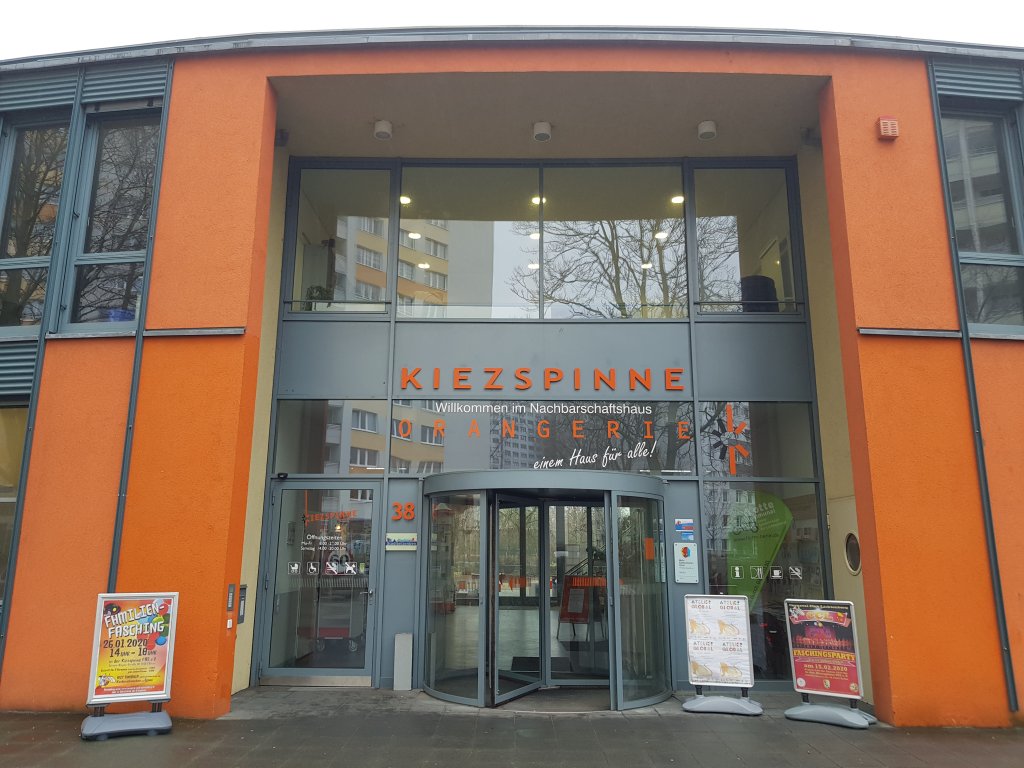 "They have so many things on their plates like learning German themselves, finding an apartment, and so on, so they expect the tutoring to work," Becker explains.

Although the success of Back on Track alumni is hard to measure in numbers, Becker says she has received "very, very positive feedback" so far.

"We don't need to do any marketing," Becker notes with a hint of pride in her voice. "We even have a waiting list because parents recommend the program to other families." Becker is sure that even students with a "high inhibition threshold" usually start to enjoy coming after a few visits.

Alumni report having higher self-esteem and being able to graduate despite big deficits in the beginning.

'We could clone us five times'

Overall, Becker thinks there is a massive lack of assistance programs like hers, even though the demand is high. "In Berlin alone, we could clone Back on Track five times," she says.

But the unique project is largely financed by foundation endowments and some donations. Becker herself worked for Back on Track for two years without getting paid.

This year, the team launched two projects, both used to bankroll Becker's position: Back on Track Youth, financed by the Aktion Mensch charity, helps teenagers over the age of 16 without school-leaving qualifications gain expertise with the help of Back on Track mentors as well as an Arabic-speaking social worker and an educational consultant.

The second project, called "Stark macht stärker" ("strong makes stronger") and financed by the European Social Fund (ESF), further trains Arabic-speaking refugee teachers and academics, and encourages them to get involved in the German education system. Becker says she hopes those teachers will function as multipliers.

But systemic change at Germany's educational system, which Becker calls a "massive, rigid machinery," can be painfully slow. The disheartening attitude toward migrant children at German schools hasn't fundamentally changed since she tried to find a school for her daughters in 2012, Becker says.

At two institutions that invited her to explain the German school system to migrant children, when she had just started to talk about the high school level, teachers allegedly told her: "No need for that. They won't get that far anyway."

When asked which countries she sees as a pioneer in integrating migrant children into the public school system, Becker points to Sweden: Unlike Germany, the Scandinavian country makes every newcomer take a language assessment test in their mother tongue before they enter school. They then join the regular classes and receive language support classes simultaneously.

"It'd be great if every child would be graded from the get-go [like in Sweden]," says Becker. "Placing the children according to their level of education would spare not only the parents but also the schools a lot of headaches."